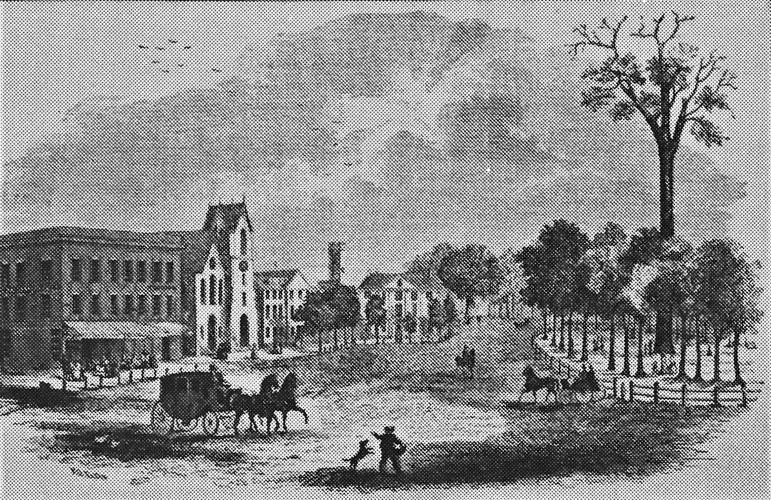 Pittsfield was laid out with the Old Elm as its central-most point. 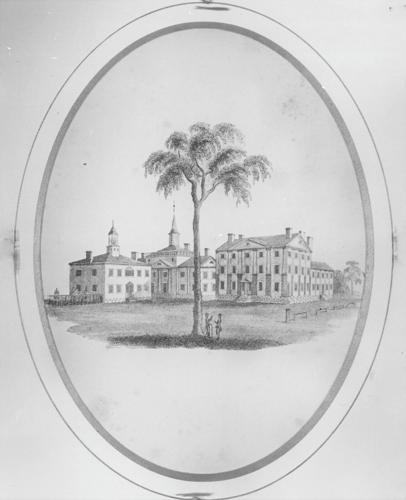 The Old Elm of Park Square may be the most “literary tree” in America. Herman Melville mentions it in “Moby-Dick;” Nathaniel Hawthorne describes it in the “American Notebooks;” and Oliver Wendell Holmes mentions it in “The Autocrat of the Breakfast Table.” 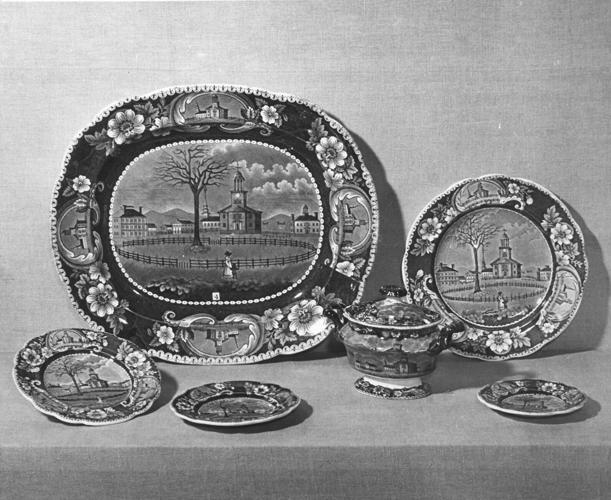 The elm also would inspire artists, such as James Clews, who in 1826, included the Old Elm and Park Square in his designs for the now-famous Staffordshire Pottery Blue Tansferware china dinnerware collection “A Winter View of Pittsfield, Massachusetts.” 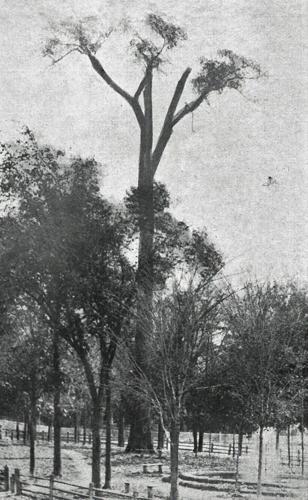 The Old Elm was 128 feet tall and its trunk was over 29 feet in circumference. By a count of its rings, it was estimated to be 314 years old.

Pittsfield was laid out with the Old Elm as its central-most point.

The Old Elm of Park Square may be the most “literary tree” in America. Herman Melville mentions it in “Moby-Dick;” Nathaniel Hawthorne describes it in the “American Notebooks;” and Oliver Wendell Holmes mentions it in “The Autocrat of the Breakfast Table.”

The elm also would inspire artists, such as James Clews, who in 1826, included the Old Elm and Park Square in his designs for the now-famous Staffordshire Pottery Blue Tansferware china dinnerware collection “A Winter View of Pittsfield, Massachusetts.”

The Old Elm was 128 feet tall and its trunk was over 29 feet in circumference. By a count of its rings, it was estimated to be 314 years old.

The woodsman’s ax sank into the tree. He loosened it from the trunk of the American Elm, raised his ax once more, and prepared to swing.

But this time, his blow would not connect with the tree. He would not even swing the ax, its path now blocked by Lucretia Williams. Williams, hearing the ax sing, rushed from her nearby home into the center of town and thrust herself between the axeman and the tree, declaring, “You will have to cut through me first.”

Startled, he stopped, much to the chagrin of the men who had hired him. The tree must fall, the town elders decreed, for this was to be the spot of the new Meeting House.

Hearing the commotion outside, her husband, John Chandler Williams, a well-respected attorney and one of the most influential citizens of Pittsfield in 1790, rushed to the side of his wife. In the moments that followed, he would strike a deal with the fledgling community — he would trade a portion of his estate to preserve the tree.

The bargain accepted, Pittsfield built Bulfinch Church, named for its architect Col. Charles Bulfinch (who also designed the State House in Boston, Faneuil Hall and the U.S. Capitol building). In return, the land immediately surrounding the beloved “Old Elm” would become the Meeting House Common, or, as we know it, Park Square.

Lucretia Williams was not the first to protect the Old Elm from a woodcutter’s ax. In 1752, just 38 years earlier, the tree had been spared by Captain Charles Goodrich.

Goodrich arrived, in what would become Pittsfield, in 1752, with the city’s first permanent settlers. It would be another year before their small village of 200 was incorporated as PontoosucK Plantation and nine years before it was incorporated a the township of Pittsfield.

In 1764, Goodrich was hired to survey the land and plot out the village center. He chose the most obvious landmark as his starting point — an American Elm that towered over all else. From there, he plotted out the roads that would run north, south, east and west. But he would not let the men hired to clear the land remove the giant Elm. As the story goes, Goodrich stopped a woodsman’s ax two blows in. Instead, he said, the road would go around the tree.

It’s life spared, the tree and the plot of land surrounding it became the heart of Pittsfield. It was there that soldiers mustered before heading out to fight in the French and Indian War. In 1777, men rallied beneath its branches before heading out to join their Revolutionary brothers, the Green Mountain Boys at the Battle of Bennington; the town pastor, the Rev. Thomas Allen, the “Fighting Parson,” at the regiments head.

The Old Elm also would host the nation’s first agricultural fair in 1807. Elkanah Watson, a farmer and entrepreneur, who is credited with the invention of the fair, had moved to Pittsfield to farm Merino sheep. In 1807, he tied two sheep to the elm, as a way to promote his sheep and the fine wool they produced. The success of this small promotion (hardly a fair), in the shade of the Old Elm, would lead to a much more ambitious fair in 1810, with a cattle show and entertainment.

The elm also would inspire artists, such as James Clews, who in 1826, included the Old Elm and Park Square in his designs for the now-famous Staffordshire Pottery Blue Tansferware china dinnerware collection “A Winter View of Pittsfield, Massachusetts.” Authors Nathaniel Hawthorne and Herman Melville would also take inspiration, each writing about it.

But, the beloved tree could not last forever. It was prone to lightning strikes, which were readily reported on by The Pittsfield Sun and The Berkshire County Evening Eagle. In 1864, the decision was made to spare it from any more agony. The city hired a contractor to remove the tree, at the cost of $5. The contractor in turn hired a “skilled young Black man named Sylvanus Grant” to cut down the tree. There is no record of what Grant was paid.

The tree, when cut down, was measured. In all, it was 128 feet tall and its trunk was over 29 feet in circumference. By a count of its rings, it was estimated to be 314 years old. Its wood was sold for the price of $10 and two chairs hewn from it — one for the First Church, the other for City Hall. Souvenirs made from its wood were readily available for purchase.

On June 23, 1903, the Daughters of the American Revolution marked the location of the Old Elm with a sundial, which can still be found there today. The local affiliate, known as the Peace Party Chapter, was named for the Peace Party House which once hosted a lavish party in celebration of the signing of the Treaty of Paris. The party, which lasted three days, featured plenty of food, including platters of goose and turkey and half a roasted ox. The hostess? Lucretia Williams, owner of the Peace Party House and savior of the Old Elm.

Jennifer Huberdeau, editor of UpCountry Magazine, can be reached at jhuberdeau@berkshireeagle.com, by at 413-281-1866 or at @BE_DigitalJen on Twitter.

Famous American elms in the Berkshires

Lanesborough’s King Elmer, at 107 feet high, is thought to be over 200 years old.

The Perry Elm, in North Adams, was planted by Williams College professor Arthur Lathem Perry in 1859 to mark the archeological spot of Fort Massachusetts. The Perry Elm, which stood 140 feet high, was cut down in August 1976. It had been infected with Dutch elm disease.

The Big Elm of Sheffield was over 400 years old in 1926, when it was decided the aging tree could no longer be preserved and cut down. The beloved tree stood 82 feet high and had a circumference of about 20 feet 3 inches. The tree is immortalized in the town seal with the inscription, “He who plants a tree plants hope.”

Mysteries from the Morgue: Was the Berkshire gold rush an elaborate hoax?

The crowd gathered at the Hinsdale Mining Co. on Oct. 7, 1899, held its breath as the hammer fell upon the clay crucible in the center of the room. It cracked, splinters flying into the air, as a …

Mysteries From The Morgue: How a community came together to squelch Spanish influenza

Three weeks earlier, the town had reported its first cases of Spanish influenza — 16 sick and one death. Now, the town had 850 recorded cases and 28 deaths from the Spanish flu or flu-related pneumonia. But, town health officials suspected the number was much higher, around 2,000 infected individuals.

Waiting to find out how much snow we'll see this weekend? Take a look back at these legendary Berkshire snowstorms

Nor'easter expected? Blizzard in the forecast? Either prediction is a sure sign that media outlets will dig up photos and facts from historic storms of years past. Sure to be included are the Blizzard of 1888 and the Blizzard of 1978. But were those the worst storms to hit the Berkshires? To find out, we hit The Eagle's archives.

Mysteries from the morgue: A castle in Adams, Sinatra and a mob boss in Hancock

Did you know Adams was once home to a castle? It was known as Castle Hathconnor (according to the North Adams Transcript or Castle Rathconnor, as named in Adams historian Eugene Michalenko's "Lost …

Mysteries From the Morgue: Against the vote? The Anti-Susan B. Anthony also came from the Berkshires

On Saturday, Nov. 5, 1932, just days before the presidential election, Anna Laurens Dawes, 81, known as the "grand lady of Pittsfield," took to the airwaves to urge every Republican to head to the polls that Tuesday.

Being from the Berkshires, birthplace of the most famous suffragette, Susan B. Anthony, Dawes' ardent push for voters to head to the polls doesn't seem out of place — until you consider she, just a dozen years prior, was the leading anti-suffragette of Western Massachusetts, if not the state.

Days Gone By: Images of the Old Elm in Pittsfield from The Eagle's Archives

The Old Elm was known as the "heart of Pittsfield," as the city was laid out with the tree at its center. When cut down in 1864, the Old Elm w…

Days Gone By: Aerial images of Pittsfield from The Eagle's Archives

Take a look at images of Pittsfield through the years — from the air.

Carole Owens: The elm is gone, but the roots remain in Pittsfield

The story of Pittsfield is a long and interesting one, but it had a slow-motion start.