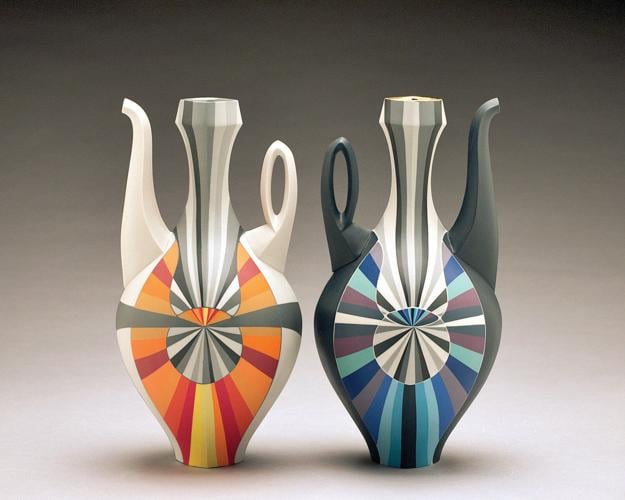 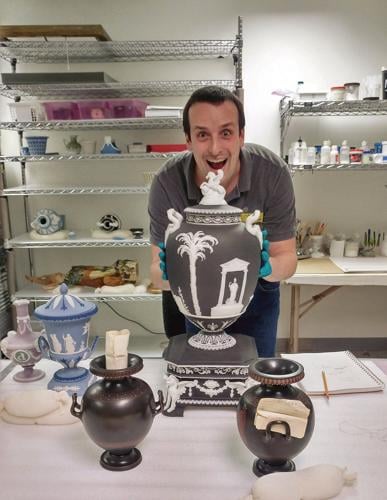 "The museum sent me the catalog of their collection and told me to pick out the items I wanted to see. I thought maybe I'd get a tour, but when I got there, all the items were sitting out on tables, waiting for me." Ceramic artist Peter Pincus poses with a Wedgwood jasperware piece, "Covered Vase: Apotheosis of Virgil," circa 1875-1885, at the Birmingham Museum of Art in 2017. 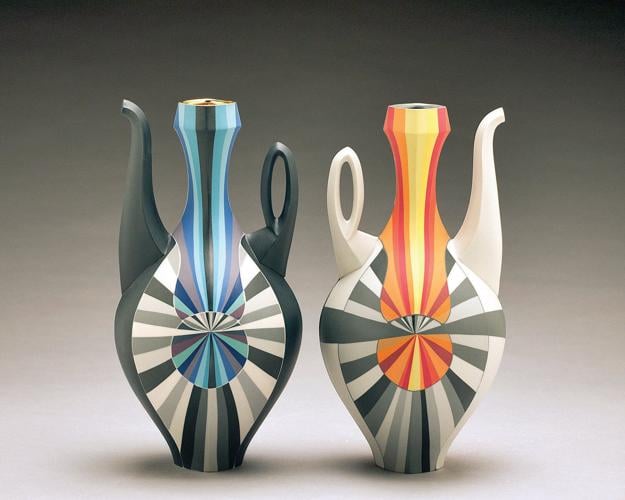 Ewers, 2018, colored porcelain, by Peter Pincus is currently on display at Ferrin Contemporary in North Adams. 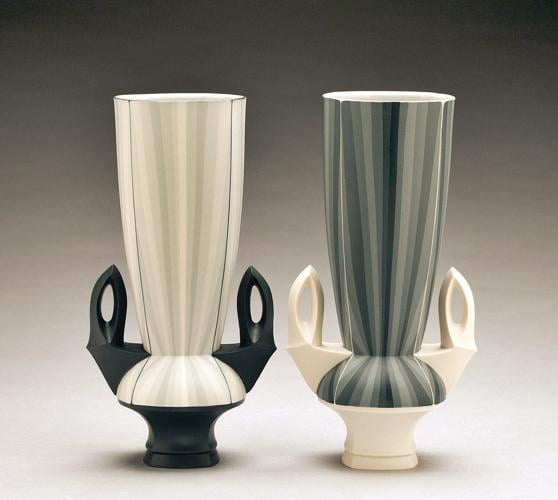 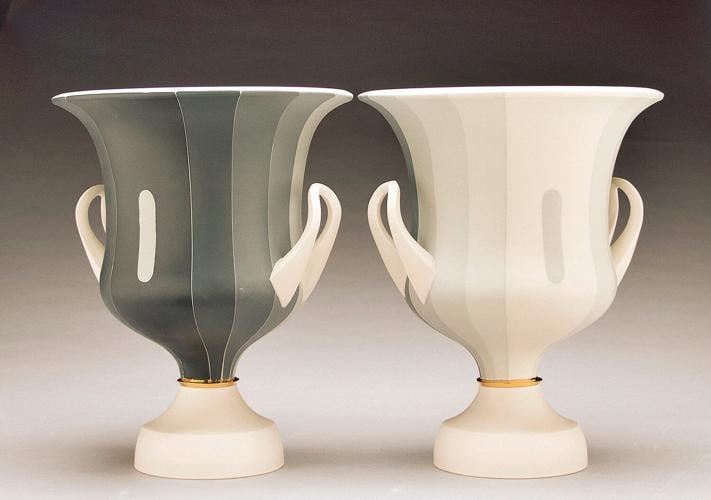 "The museum sent me the catalog of their collection and told me to pick out the items I wanted to see. I thought maybe I'd get a tour, but when I got there, all the items were sitting out on tables, waiting for me." Ceramic artist Peter Pincus poses with a Wedgwood jasperware piece, "Covered Vase: Apotheosis of Virgil," circa 1875-1885, at the Birmingham Museum of Art in 2017.

Ewers, 2018, colored porcelain, by Peter Pincus is currently on display at Ferrin Contemporary in North Adams.

You may only see it at Thanksgiving or Christmas dinner — precious bone china plates with blue or red scenes of the English countryside, or those chalky blue-colored jasperware serving platters, tea cups. plates and bowls decorated with raised white reliefs of reclining Neoclassical figures.

From the banquet halls of British royalty to the dinner tables of American families, Wedgwood china has been a mainstay in homes around the world for over 250 years. The first mass produced and marketed pottery in the world, its name became synonymous with refinement and upward mobility.

But in the world of ceramicists and potters, its founder, Josiah Wedgwood, has long been a controversial figure.

"Manufacturing and business are like scarlet letters in ceramics," said Peter Pincus, a ceramicist and visiting professor of ceramics at the Rochester Institute of Technology. "Josiah Wedgwood was an enigmatic figure in the field of ceramics. Today, he's known for his manufacturing company that has survived the ages."

His first solo exhibition with Ferrin Contemporary in North Adams, "Peter Pincus: Channeling Josiah Wedgwood," will challenge today's perception of Wedgwood and his legacy, while also providing a contemporary perspective of those historical and important works.

"People have misconceptions about what that work is all about. People understand it in its current form — in plates and cups with very polite patterns," Pincus said. "At one point, Josiah Wedgwood said he wanted to be 'vase maker general to the universe.' He was pretty intense. His vision was to be the maker of this ceramic ware that had appeal to all different sorts of cultures and classes.

"He made decorative arts for the home for all class systems. He believed he could use the imagery on the surface to inform them. He made a teapot to be used by the middle class with imagery [showing] the upper class and how they would use the pot. It was sophisticated imagery. Now, of course, he's gone and there's a different vision — a watered-down post-studio world of ceramics."

The exhibition is part of a creative investigation into the Dwight and Lucille Beeson Wedgwood Collection at the Birmingham Museum of Art that began with a three-day residency at the Birmingham, Ala., institution in 2017.

A year prior, gallerist Leslie Ferrin was touring the Birmingham Museum, where she viewed the museum's Beeson Wedgwood and Buten Wedgwood collections — the largest collection of Wedgwood outside of England.

"She saw a lot of decorative work from 19th and 20th centuries. She felt there was a resemblance to my work in the color, architecture and structure. She started sending me images and texts of what she was seeing," he said.

Ferrin, in a phone conversation from Detroit, recalled the excitement with which she sent those initial texts and images.

"I'm so excited we have the opportunity to do this show," she said. "Today, we don't think of Wedgwood as anything other than cameos or fancy, high-society objects. But it was once so much more."

Pincus was intrigued by the concept of a residency at the museum that Ferrin began envisioning. Unbeknownst to her, Pincus was exploring the topic of Wedgwood's attempt to own the patent for Etruscan pottery with his class at RIT.

Ferrin arranged for the research grant that led to the three-day residency, which Pincus believed would only be scholarly in nature.

But when he arrived at the museum, where series of Wedgwood jasperware, Etruscan, salt and-white stone vases, and more were available for him, things changed.

"It was a transformative experience to hold them; feel them and experience them. In the time period they were made, you have this person who, before 3D printers, was a 3D printer," he said. "It was ghostly to hold it. It didn't feel like you were holding something made in the 18th century or the 4th century BCE. It was something in between."

Pincus began questioning if the work was appropriated or reproductions of the utmost integrity. The residency led to research into Wedgwood and a quest to place his work more appropriately in the history of ceramics. He also presented lectures on the topic. And then he went into the studio.

"To better understand the work, I just had to make the work," Pincus said. "I began with the Etruscan pot, his primary source for one of his objects; a calyx krater — a traditional wine-holding vessel. I looked very closely at Josiah's reconsideration of that form, just trying to reproduce those objects; understanding what liberties I had and what things I had to stick to with the original source."

The end result is six new forms, cast from molds he created, and painted in the vibrant color palettes Pincus has come to be known for.

"He definitely challenged himself, " Ferrin said. "There were some crushing failures along the way. I said to him, 'Imagine what Josiah Wedgwood experienced. If you're channeling him, you were channeling his struggles as well. We have so much more control today than when Josiah was working.' Peter is definitely interpreting and reinterpreting this work.

"I'm really proud of him. It takes a lot of creative energy to develop this new work amidst his teaching and family responsibilities."

She added, "As a gallery, this is exactly what we love to do. We use the space as a deadline and hurdle for artist. The next step, we hope, is that collectors will appreciate where he is now. If they make acquisitions, he has funds to make the next series of work."

And Pincus has big plans — another trip to Birmingham for another round of research. A second residency has already been secured, Ferrin said.

"The first residency, I didn't really know what I was looking for," Pincus said. "Now, I know. I'm excited to get back to the museum, to dig specifically into ideas that were present in that work and make a pretty big body of work based on it."