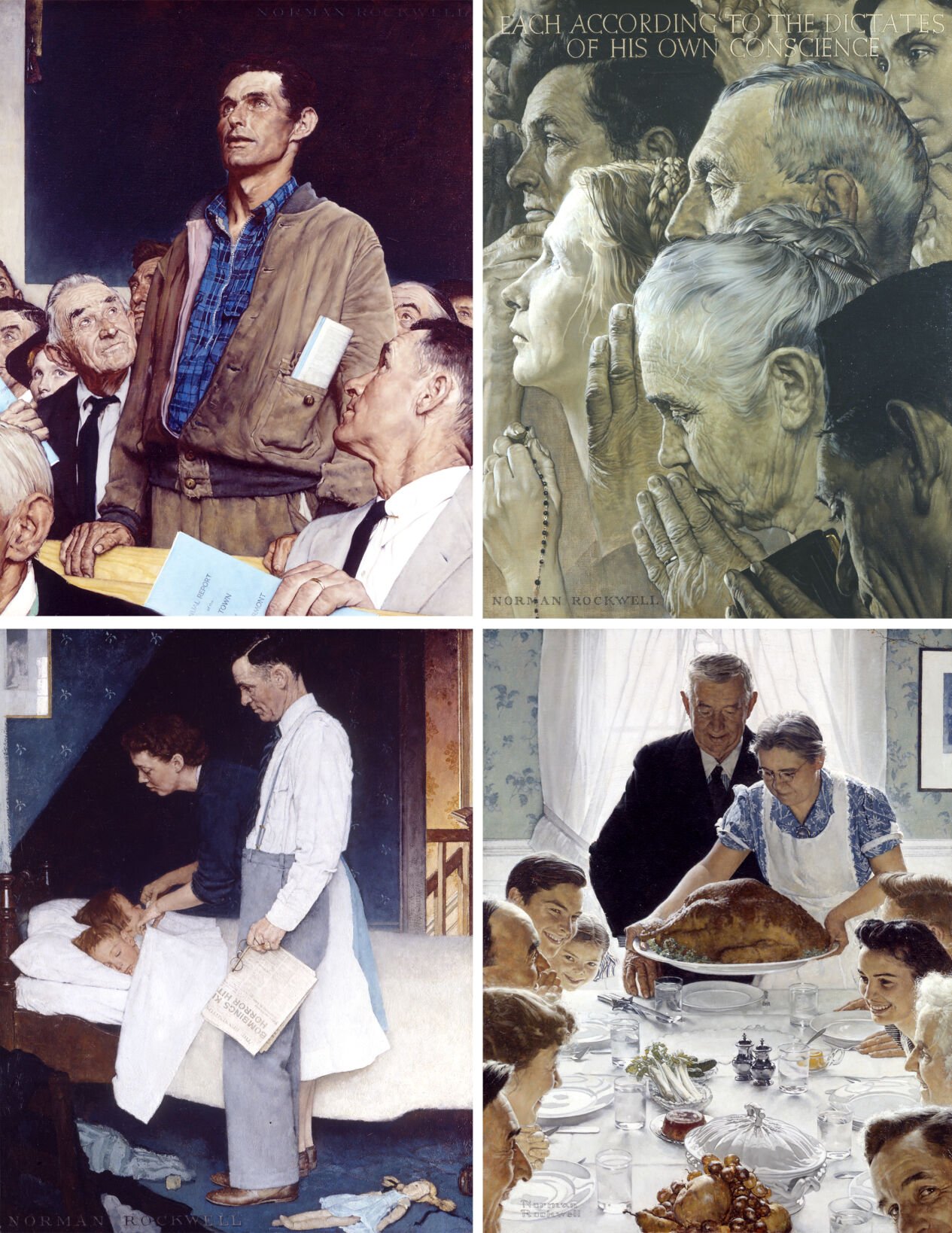 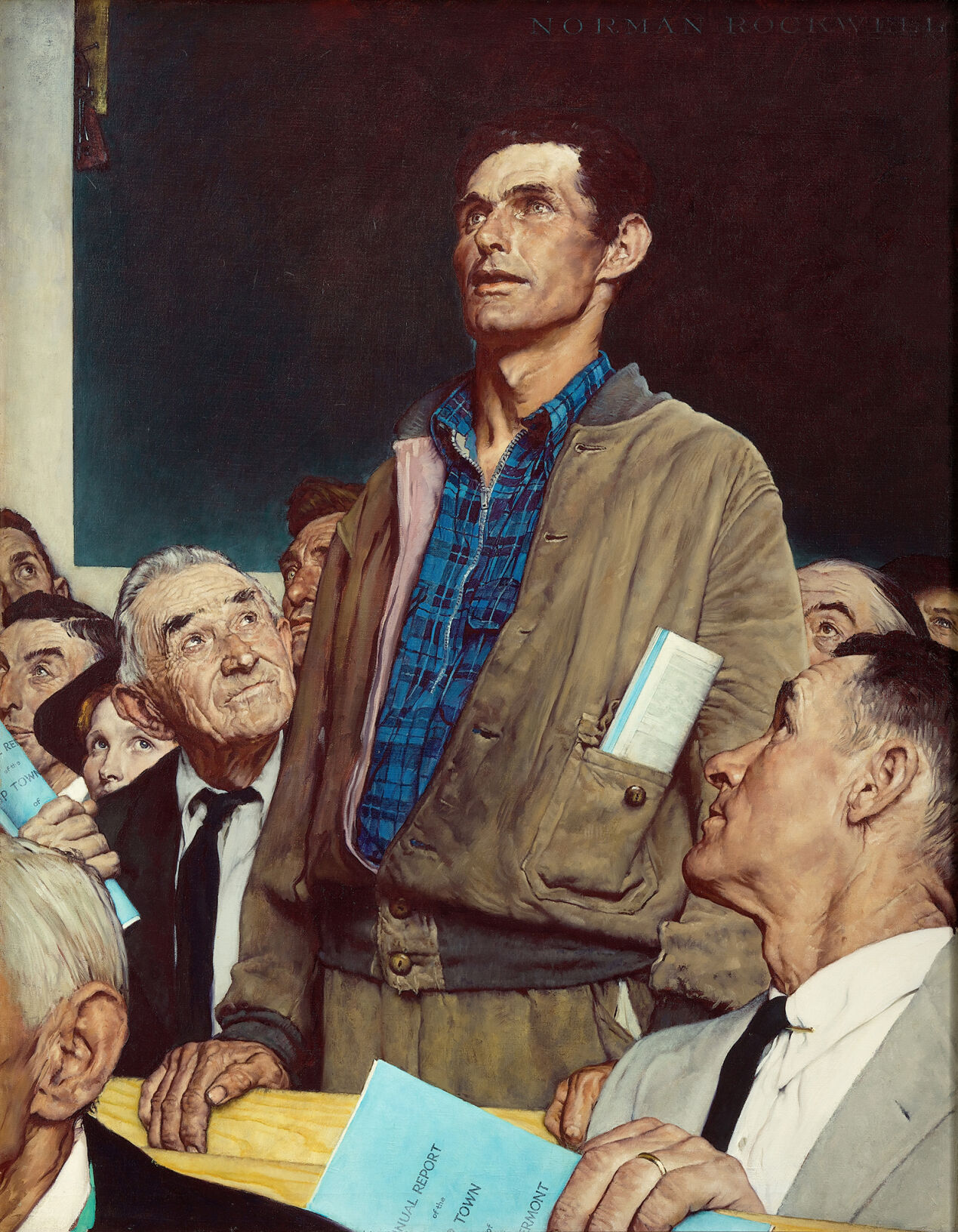 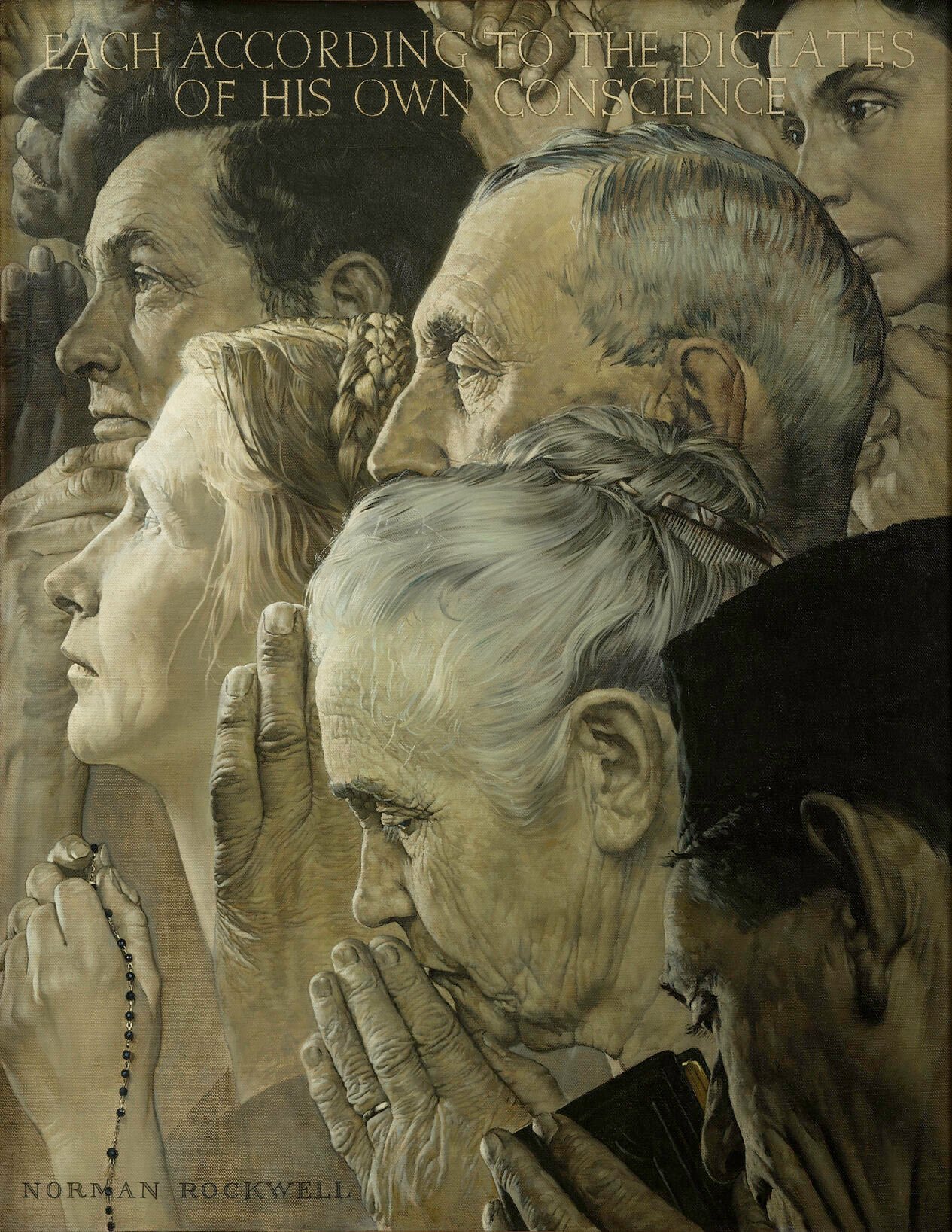 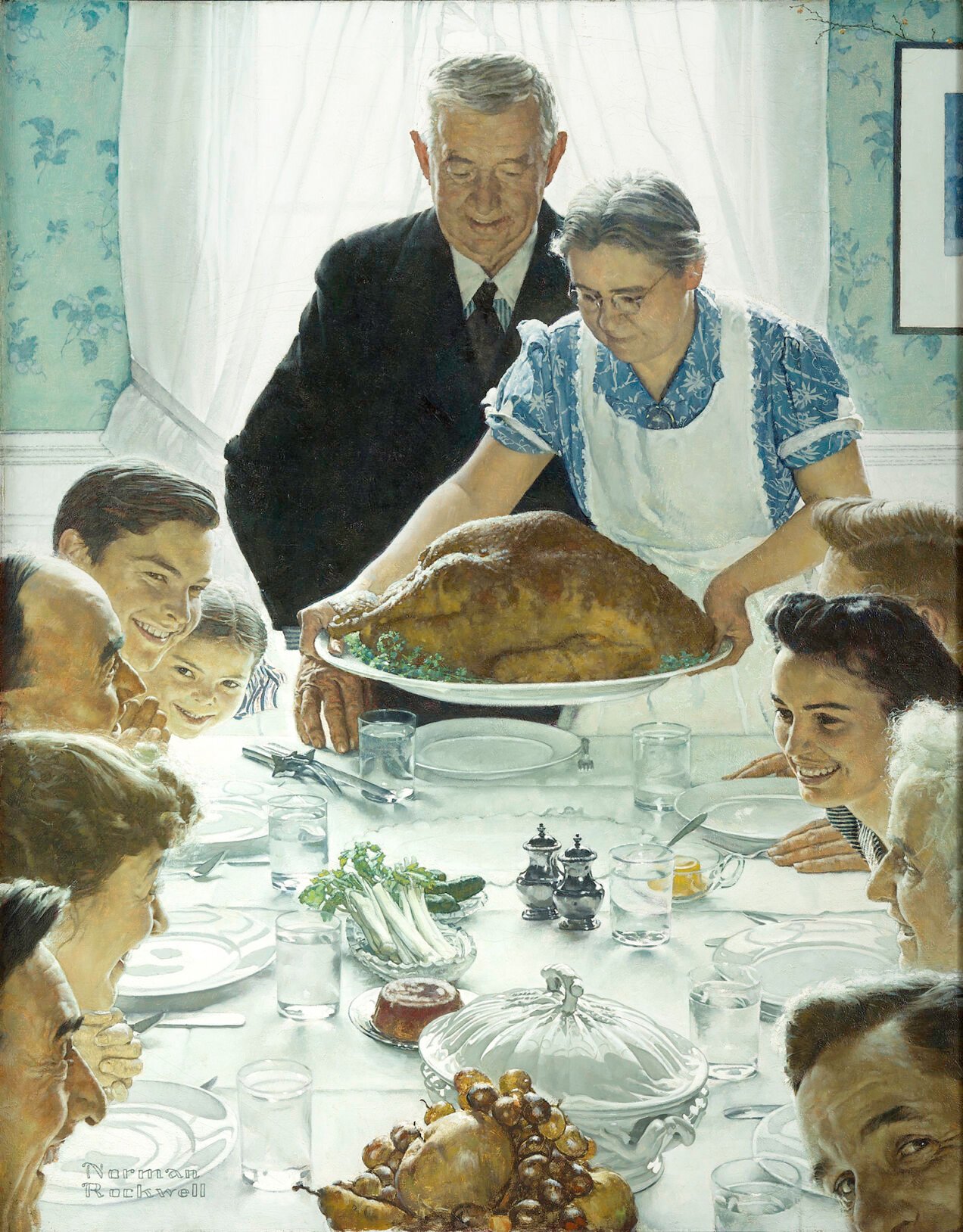 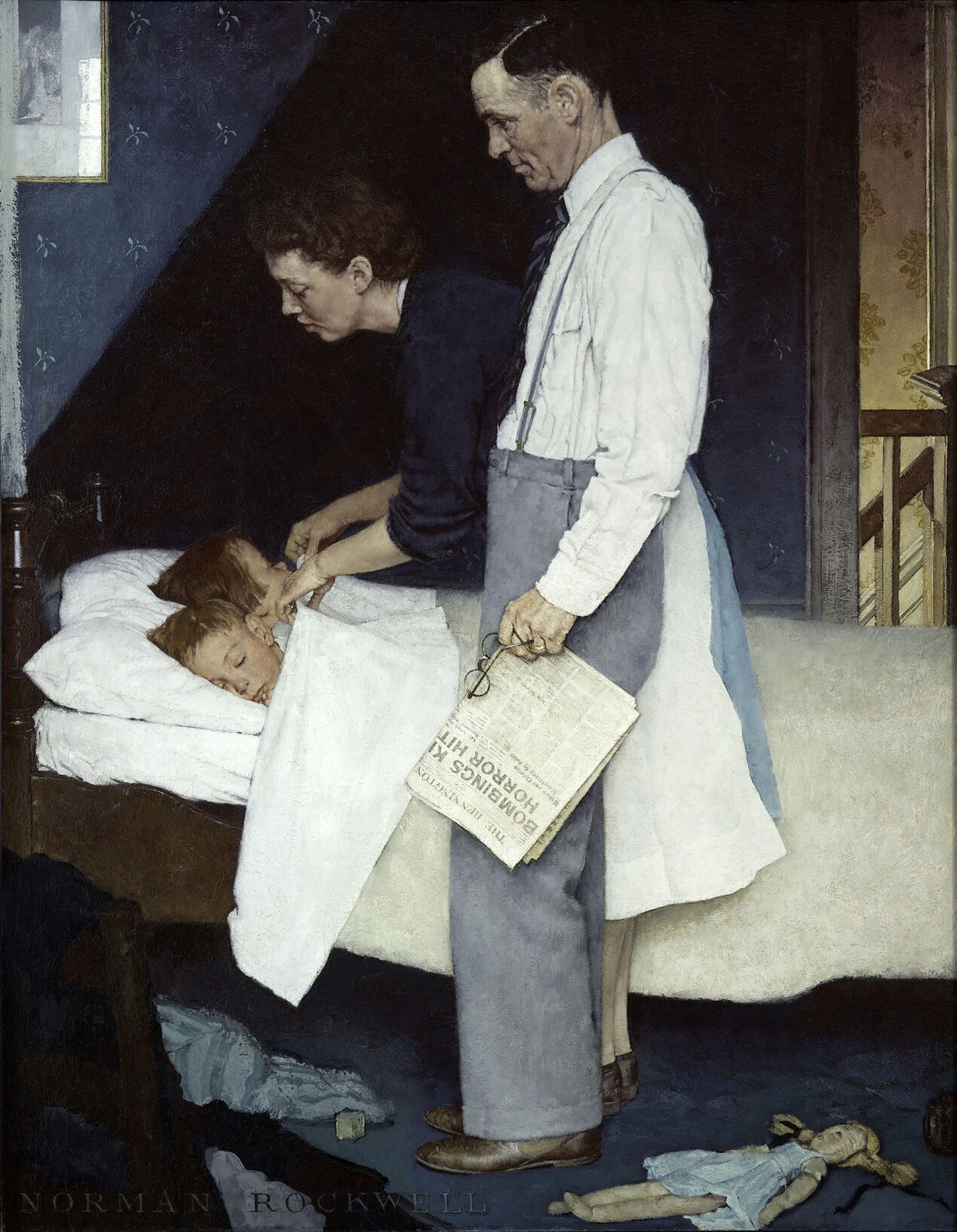 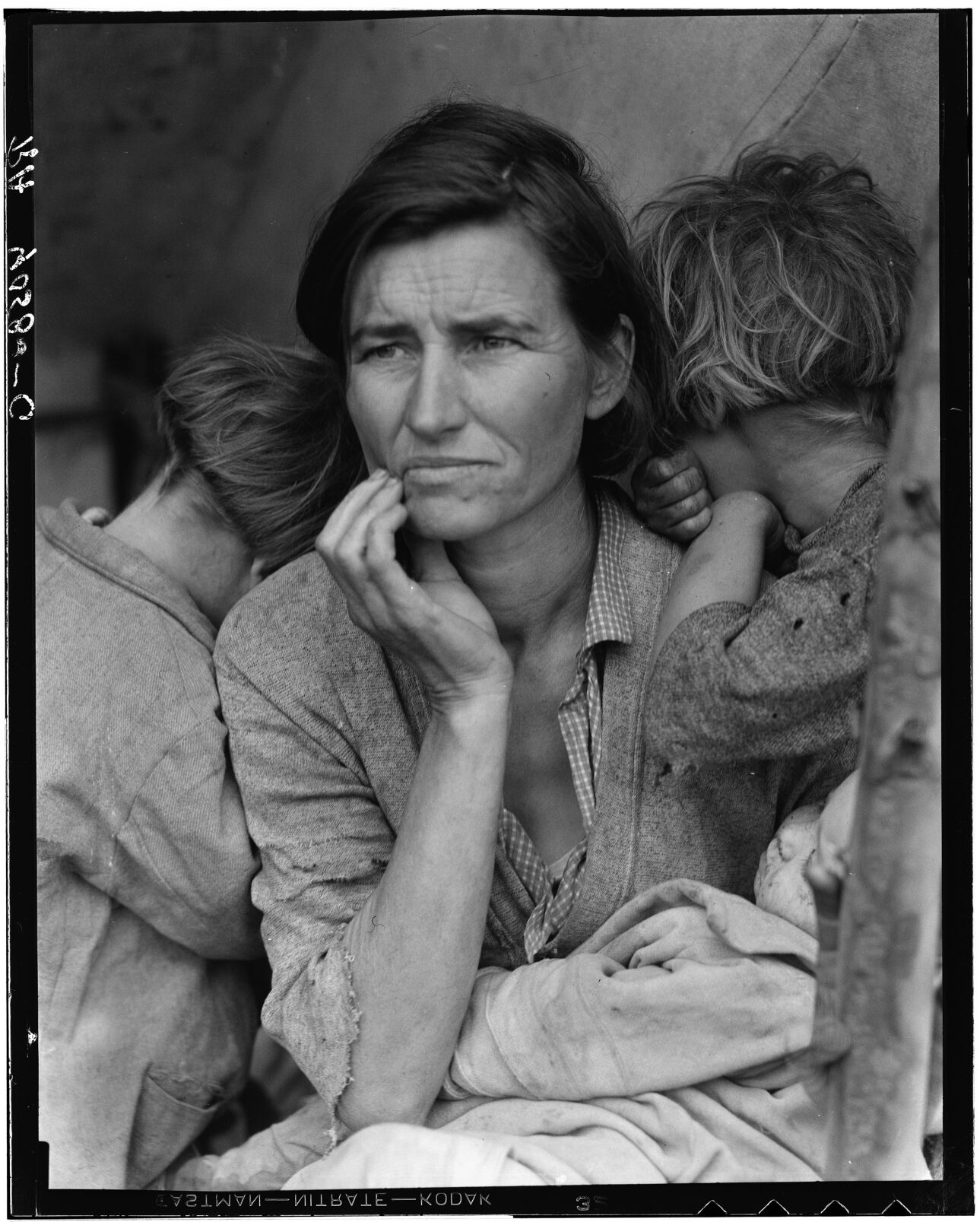 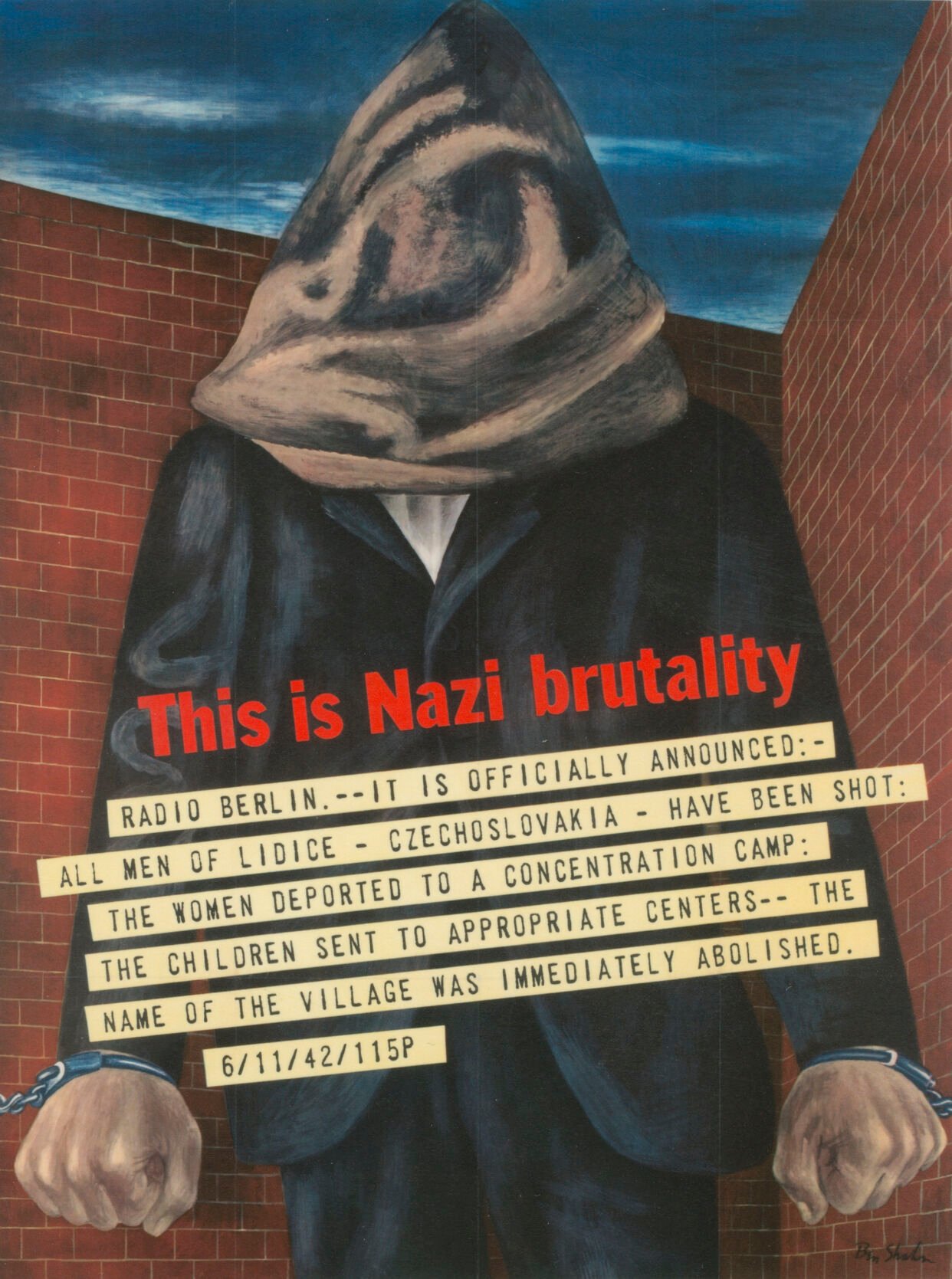 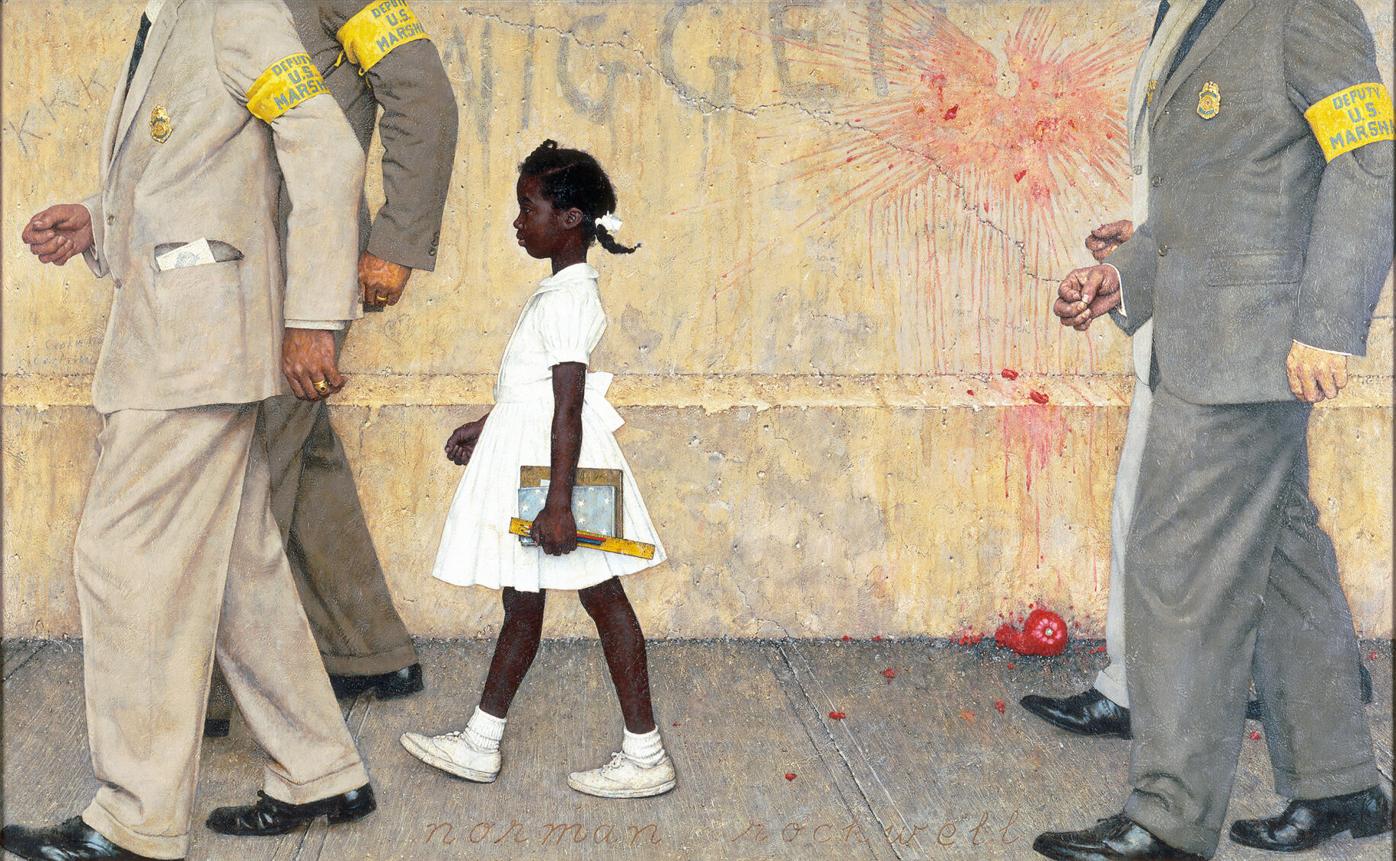 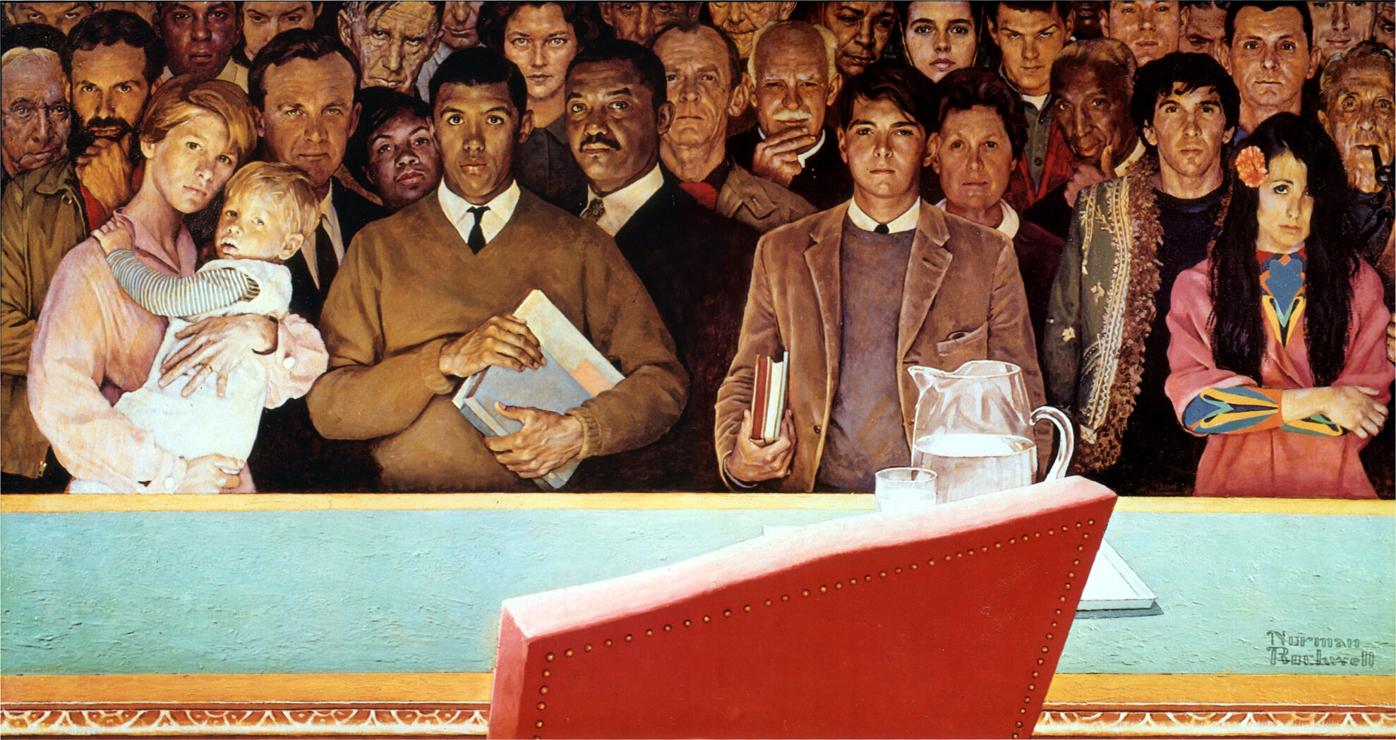 STOCKBRIDGE — President Franklin D. Roosevelt described a vision of four American ideals being extended to the rest of the world in his 1941 address to Congress, known thereafter as the “Four Freedoms”: freedom of speech; freedom from want; freedom from fear and freedom of worship.

But those American principles, now synonymous with Roosevelt’s legacy and presidency, didn’t truly take hold with the American public — try as he might — until two years later when Norman Rockwell’s iconic “Four Freedoms” appeared inside the Saturday Evening Post (not on its cover), each with an accompanying essay, that February and March.

A new exhibition at the Norman Rockwell Museum, “Norman Rockwell: Imagining Freedom,” brings home the iconic “Four Freedoms paintings,” which have been on a six-city international tour with the show since mid-2018. The exhibit, co-curated by Stephanie Haboush Plunkett, museum deputy director and chief curator, and James J. Kimble, associate professor of communications and art at Seton Hall University, is the first comprehensive look at how the paintings came to be embraced by the American public, provided aid to the war effort and helped uplift public morale.

“When they were produced and published in the Saturday Evening Post, people started writing in, asking for reprints. It was then that The Post produced them in partnership with the U.S. Treasury. They made reproductions of all sizes that you could get when you purchased a war bond,” Plunkett said during a tour of the exhibit. “The paintings were used to make posters that encouraged the public to purchase war bonds.”

As part of the Four Freedoms War Bond Show, Rockwell’s original paintings went on a 16-city tour to publicize the Second War Loan Drive, beginning at Hecht’s department store in downtown Washington D.C., where the artist made his only appearance, signing autographs, meeting celebrities and talking to reporters. The show, which also featured hundreds of other artworks, posters pamphlets and manuscripts, raised $132 million for the war effort.

Broken into five major thematic sections, the exhibition not only places the paintings in context with Roosevelt’s presidency and World War II, it also explores the legacy of the pieces, as well as their artistic impact — on Rockwell’s own work and on those of other artists over the last eight decades.

Conversations about the show began in 2015 three years prior to its May 2018 debut at the New York Historical Society in New York City.

“We’re very fortunate to have the ‘Four Freedoms’ as part of our permanent collection,” Plunkett said. “We began [in 2015] thinking how clearly the painting related to what was being discussed in the world today and the ways in which we could help raise community conversations by talking about what they mean in the 21st century compared to the 1940s. Have we obtained those ideals? Or are we still working toward them?”

To do so, the curators first worked to establish a context of the time period leading up to Rockwell’s creation of the “Four Freedoms.”

Beginning with “The War Generation,” the exhibit looks at the 1929 Stock Market Crash and the Great Depression, including some of Rockwell’s covers for the Saturday Evening Post alongside gripping images of unemployment lines and devastated farm workers captured by Farm Security Administration photographers including Walker Evans, Dorothea Lange, Gordon Parks, and Arthur Rothstein, among others.

“The Great Depression was documented by some really important photographers working for the Works Progress Administration. It was also a time when Americans were regrouping from World War I. When Roosevelt gave his speech in 1941 and talked about taking action and the Four Freedoms, it was not widely agreed upon by the American public. Most were not interested in getting involved in another war; there was an isolationist point of view. Even now, the Four Freedoms are very aspirational ideas.”

While WPA photographers were turning out images of poverty and hunger, magazines such as the Saturday Evening Post, Collier’s, Ladies’ Home Journal and Good Housekeeping saw it as their job to raise the hopes of the American public, not reflect the current topics of the day in their cover illustrations.

“Even during the Great Depression, Norman Rockwell only referenced the Stock Market Crash only once on a cover. Magazine covers featured images of aspirational everyday life; simple pleasures that could be enjoyed without many means,” Plunkett said.

Among those covers was Rockwell’s “Barbershop Quartet,” from Sept. 26, 1936, and “Marbles Champ,” from Sept. 2, 1939, both on loan from a private collector. The former features a popular form of free entertainment from the time period, the barbershop quartet, while the latter, features his trademark imagery of a strong girl, in this case, kneeling on the ground, beating the boys at a game of marbles.

Next, in FDR’s Four Freedoms, the exhibit explores Roosevelt’s attempts to rally the American public around his Four Freedoms through his famous “Fireside Chats” and with the aid of artists of every medium. The exhibit is bolstered with artifacts from the time period, including reproductions of his 1941 address, hand-written notes by his personal assistant, items commemorating the Atlantic Charter; works of anti-fascist art depicting leaders of the Nazi and Japanese armies, and a section highlighting the creation of “Rosie the Riveter.”

It was during this time period that Rockwell created the fictional “Willie Gillis: American GI,” who appeared on 14 Saturday Evening Post covers beginning in 1941. Rockwell also painted covers depicting the ration board in Arlington, Vt., where he lived at the time, and of soldiers enjoying time at home.

“When we look at magazines of mid-century, they are depicting white America,” Plunkett said. To counter-balance that focus, the exhibit includes information about and photographs of people of color who were part of the U.S. Army, which was segregated at the time. Specifically featured are the Tuskegee Airmen, the first Black military aviators in the U.S. Army Air Corps.

“These were men who were fighting for America and who did not have the same rights as their white counterparts back home,” she said.

Special attention also has been paid to Roosevelt’s creation of the Japanese internment camps following the bombing of Pearl Harbor.

A section called “The Artistic Response” focuses on works created by Rockwell and his contemporaries for Roosevelt’s War Information Office. Thousands of artists responded with tributes to the Four Freedoms in painting, sculpture, writings and music, including a full symphony. Artists created propaganda and war bond posters; even the Saturday Evening Post commissioned covers of soldiers at war. It was during this time that Rockwell created his only painting of a soldier in war, “Let’s Give Him Enough and On Time,” for posters that were distributed to munitions factories to encourage production.

“It was this poster that made him realize that he wanted to do more and that’s when he began to conceptualize the ‘Four Freedoms,’” Plunkett said.

After viewing the “Four Freedoms,” visitors are shown the direct impact the paintings had on Rockwell in “Freedom’s Legacy,” which looks at the artist’s departure from The Post and his illustrations for Look magazine and works related to the Civil Rights movement. Included are photographs and studies for “The Problem We All Live With,” “The Golden Rule,” “The Peace Corps: JFK’s Bold Legacy,” and “The Right to Know.”

“Rockwell was a hopeful artist,” Plunkett said, “representing hope and offering a window into a better place and he continues to be so. At the basis of Rockwell’s work is a sense of humanity.”

Included as a part of the exhibition are “Reimagining the Four Freedoms,” a juried multi-media show featuring 38 national and international artists selected from a field of 1,000, who explore ideas of freedom in a contemporary context; “Pops Peterson: Rockwell Reinvented,” showcasing pieces from the Berkshire-based artist’s 2015 series “Reinventing Rockwell,” which reimagines Rockwell’s most iconic paintings in contemporary times; “The Unity Project,” featuring works commissioned by the museum from top illustrators aimed at establishing “a camaraderie of unity and belonging among all Americans who share the common right to elect and vote in our country,” and “Norman Rockwell: Murder in Mississippi,” a look at the Rockwell’s 1965 painting illustrating the murder of three civil rights workers in Philadelphia, Miss.

When: 10 a.m. to 5 p.m., Thursday through Monday. Closed Tuesday and Wednesday. Special hours for seniors and immunocompromised patrons: 10 a.m. to noon, Thursday and Friday.

Timed-ticketing and Code of Courtesy: Timed-tickets must be purchased in advance of your arrival. Time segments are available every 30 minutes during hours of operation. Visitors over the age of two must wear face masks.

What: Celebrate the opening of "Norman Rockwell: Imagining Freedom," with a virtual gala roundtable featuring a lively discussion between museum staff and contemporary illustrators featured in the exhibit about freedom today.

How to watch: All talks will be available as a free live stream on nrm.org and on the museum's social media sites. Or for a $10 donation (free for members) watch the entire program over Zoom and then participate in a Q&A with the panelists not available on the free livestream. Zoom link and instructions will be emailed to you approximately four hours prior to the program. Registration required for the virtual program and Q&A.

Embedded: Illustrators and the Armed Forces

What: Join political illustrator Victor Charles Juhasz and other combat artists who will discuss their experiences as imbedded illustrators across the branches of the armed forces and the power of art to tell personal stories.

What: How can society meet the needs of all Americans for food sustainability, shelter, and global health? Join a conversation with noted scholars and artists to explore the history of need in our nation and new strategies that are being developed to meet the challenges. Panelists to be announced.

What: Conscience is the individual’s most sacred right. How do multiple belief systems benefit a pluralistic society and why should freedom of religion be a fundamental human right? Join religious leaders from diverse faith traditions in a conversation about Freedom of Worship and its role in sustaining our democracy. Panelists to be announced.

Freedom v Fear: A History of Anti-Fascist Art – A Conversation with Steven Heller

What: Author and illustration/design historian Steven Heller will explore how graphic symbols through time endure and influence life—for good and evil—for generations. A nuanced examination of the most powerful symbol was examined in his recent book, "The Swastika and Symbols of Hate."

What: Throughout history, illustrators and cartoonists have responded to the world’s challenges and upheavals with brilliance and ferocity. Navigating the technical and distributive realities of their times, artists create potent visual symbols and narratives that establish new visual metaphors and repurpose old ones, sometimes borrowing conventions from other media. Two panels: "DIY Print Culture and Citizenship" and "Resistance and Mainstream Publishing: Media, Delivery, and Propaganda."

What: Discuss the legacy of the Four Freedoms with illustrators, authors, and scholars who will share perspectives on historical and contemporary notions of freedom, and on the role of imagery to shape public perception, decision-making, and cultural narratives.

STOCKBRIDGE — Lady Liberty isn't holding a mere torch to light the way. In a new illustration inspired by the iconic statue, her raised, clenched fist, is actually aflame. And instead of a serene, 1,000-yard stare, artist Yuko Shimizu’s Lady Liberty stares up defiantly, through a crown’s silver spikes and Medusa-like shock of hair. …