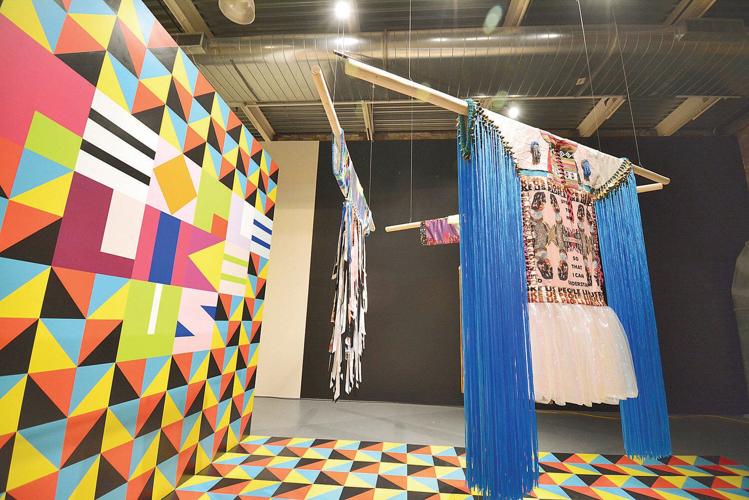 This piece by Jeffrey Gibson is part of "Suffering from Realness," a new exhibit set to open at Mass MoCA on Saturday, April 13. 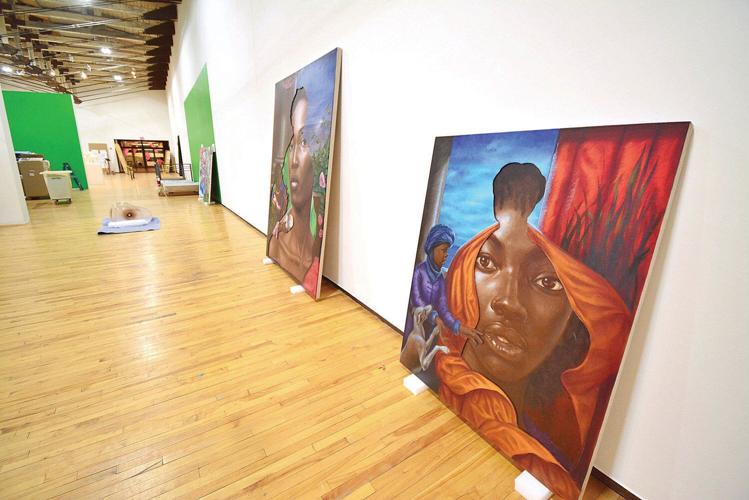 Works by Titus Kaphar wait to be installed. Kaphar's work aims to give overlooked histories their rightful prominence. 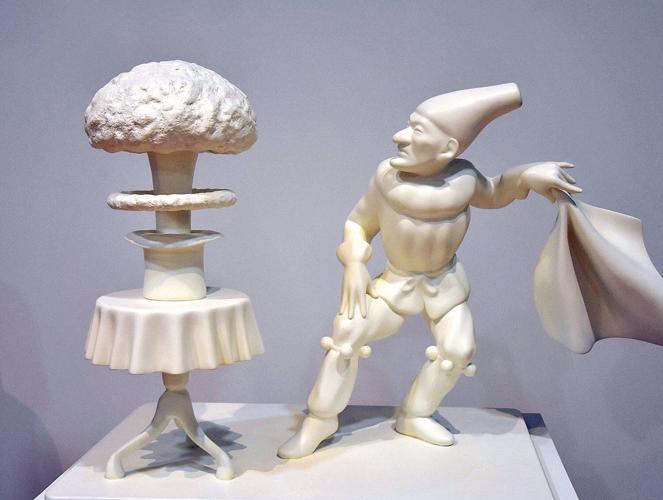 One of a series of sculptures by Robert Taplin. The sculptures are of the Commedia dell'Arte character Punch.

This piece by Jeffrey Gibson is part of "Suffering from Realness," a new exhibit set to open at Mass MoCA on Saturday, April 13.

Works by Titus Kaphar wait to be installed. Kaphar's work aims to give overlooked histories their rightful prominence.

One of a series of sculptures by Robert Taplin. The sculptures are of the Commedia dell'Arte character Punch.

When Denise Markonish first heard these lines in Jay-Z and Kanye West's 2011 hit, "N----- in Paris," the phrase "suffering from realness" stuck with her. The Massachusetts Museum of Contemporary Art senior curator and managing director of exhibitions was intrigued enough by the words that she decided to build a show around them.

"I was thinking about a show about representation, about how artists were representing the body, how the notion of the body has increasingly become more and more complicated," Markonish said Wednesday during a tour of "Suffering from Realness," a group exhibition in Building 4 of the North Adams institution that is set to open Saturday, April 13. It features artists Anthony Aziz and Sammy Cucher, Cassils, Adriana Corral, Joey Fauerso, Jeffrey Gibson, Hayv Kahraman, Jennifer Karady, Titus Kaphar, Robert Longo, Christopher Mir, MPA, Wangechi Mutu, Allison Schulnik, Keith Sklar, Robert Taplin and Vincent Valdez.

A procession of Corral and Valdez's sculpture, "Requiem," will officially mark the show's opening on that Saturday. Several pall bearers will carry the human-sized cast of an eagle into the gallery. Musicians, including Valdez on the trumpet, will accompany them, evoking a New Orleans jazz funeral.

"This is what this whole show is about," Markonish said. "It is about mourning the America we think we know."

On Wednesday, Corral was working in the space where the eagle would ultimately rest, overseeing dusting and painting work done on dry walls that had numeric dates carved into them. The Houston-based artist frequently incorporates data collection into her work, and for this piece, she asked people of various backgrounds to send dates that were either personally or historically significant. She used 243 submissions from across the country, a nod to the U.S.' 243 years.

"This is like a history for the people, by the people," she said of the wall's engravings. "What I like is that it's this collective memory from people that we don't necessarily hear from."

The participants also sent texts explaining their choices. When Corral was done documenting the dates and responses, she burned the materials. She and Valdez used the ashes to patina the bronze eagle, which is laying on its back. The charred figure contrasts starkly with the surrounding white walls.

Valdez, famous for, among other works, his painting of Ku Klux Klan members in "The City I," had wanted to transform a two-dimensional depiction of an eagle into a sculpture. The Houston artist's "Dream Baby Dream" paintings will also live in the gallery. They focus on attendees of Muhammad Ali's funeral.

"He saw that as a moment where people of all races and all denominations came together to mourn this activist," Markonish said.

The curator's choices for this group exhibit also represent a broad range of American experiences and identities.

"When I first started working on the show, it was maybe more international," Markonish said. "But as the [2016 U.S. presidential] election happened, and as things were starting to become clear, I knew it had to be an American show. It's about this place, and it's about how artists are coping and dealing with this moment."

Kaphar's work has aimed to give overlooked histories their rightful prominence. Many recent Mass MoCA visitors have appreciated his Building 6 piece, "Language of the Forgotten," which alludes to Sally Hemings through a Thomas Jefferson bust. Now they can also check out a work from the same series. "Monumental Inversions: George Washington" is a carved image of the the first U.S. president on horseback. Hand-blown glass burned the wood. Some glass bubbles fit in the original sculpture; others rest beside it. The MacArthur "genius" grant recipient's work also comments on Washington's slave trading by incorporating molasses, rum and other items the leader received in a swap.

"Monumental Inversions exist as absences or impressions of national heroes emptied of their deified mythologies. They reflect both positive and negative implications of the lives of these mortal men," Kaphar's website says.

Two paintings from the artist's "Seeing Through Time" series will hang nearby. Kaphar paints two canvases for each. The "under" canvas is a portrait of a contemporary black woman. The other canvas is a historic painting of a Caucasian figure. Kaphar cuts out the Caucasian portrait.

"This kind of image represents a very old cliche," Kaphar's website says. "Within the context of 19th century paintings most black characters play, at best, secondary roles in the composition. The prototypical image of a black person was as a slave or servant, just outside of illuminated areas of importance."

Across the room, gallerygoers will see Kahraman's stylized self-portraits that weave together multiple works and reference celebrity and sexuality. A short walk back toward the exhibit's entrance stairwell will take visitors to four Taplin sculptures of Commedia dell'Arte character Punch. In a nearly 9-foot plaster piece, Punch is making a confession, symbolizing, in a sense, America.

"He's got a lot to apologize for," Markonish said Taplin told her.

"They're speaking to the violence enacted upon women's bodies," Markonish said.

Across the way, Karady's cinematic photos of U.S. veterans of wars in Iraq and Afghanistan depict scenes that evoke conflict within homes. For example, in one photo, bullet holes dot a fridge, and a can of food looks as if it is exploding.

"For a lot of these soldiers, this becomes a [different] way to share their story with their family," Markonish said of the series.

Gibson, who will have a solo show in Building 5 eventually, draws from his Native American identity for an installation of garments. Another type of installation — video — is common to the show. Cassils' slow-motion body burn clip, for instance, will draw plenty eyeballs.

Film inspired Markonish during her curation. After she watched Adam Curtis' 2016 documentary, "HyperNormalisation," she started thinking about how "anesthetized" humans are to corruption. Still, in what the curator calls her most overt political show, the focus is on what's "real."

"I think in an era of fake news and truthiness and all of that," she said, "it's important to think about what real means to you."