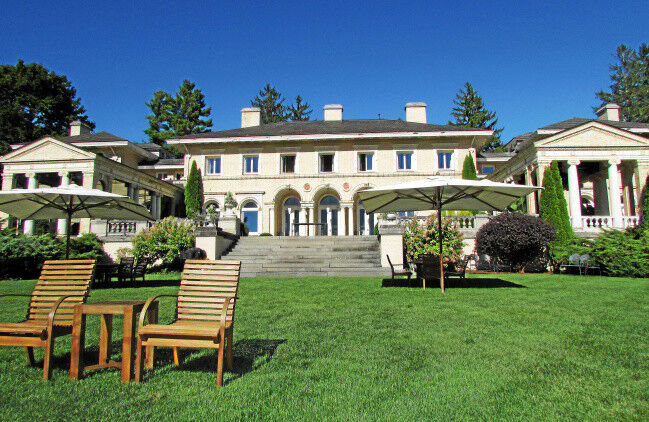 Wheatleigh sits upon a hilltop overlooking the Stockbridge Bowl. 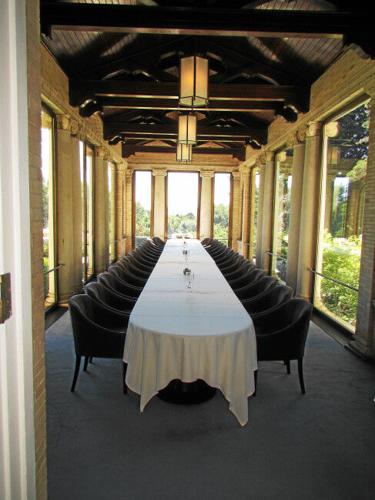 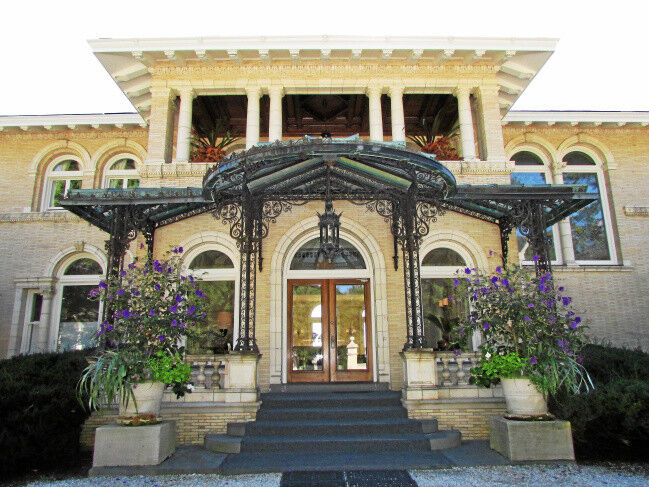 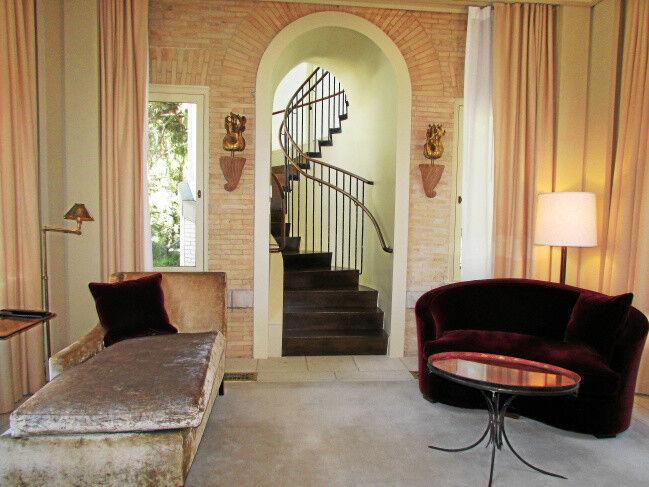 The Aviary, a two-floor suite at Wheatleigh, was once used as a real aviary by its original owners, Carlos and Georgie de Heredia.

Wheatleigh sits upon a hilltop overlooking the Stockbridge Bowl.

The Aviary, a two-floor suite at Wheatleigh, was once used as a real aviary by its original owners, Carlos and Georgie de Heredia.

Photo Gallery | The Cottager: Wheatleigh Bathed in the glow of mauve, amethyst, and rose-colored lights, the exterior appearance of Wheatleigh, the Italian villa of Count Carlos de Heredia and Countess Georgie Bruce Cook de Heredia, garnered as much attention in the New York Times and Washington Post social columns as the night's "domino ball" did.

"Magnificent lighting effects were produced by the abundant use of electricity, which was employed throughout the grounds and made the gardens of flaming splendor," stated one anonymous social reporter in a column published by the New York Times on Sept. 18, 1915.

Inside the villa, a majority of the 150 guests of the de Heredias swirled and glided across a ballroom floor colored pink and white by electric lights.

"The women of the colony wore cloaks and hoods [known as dominos] of many hues and many were masked. By law of the state of Massachusetts, both sexes are not allowed to mask for a ball and only the women were disguised. At 1 o'clock the masks were removed and supper was served on the inclosed [sic] porches," the Washington Post reported.

Hosting an event of such size wasn't unusual for Mrs. Carlos de Heredia, as she was often referred to, who was known to lend her lawn, gardens and home to local clubs and charitable organizations. A dozen years later she would host a dinner party for 80 guests, including the faculty and student body of the nearby Lenox School.

At the time of the domino ball, Countess de Heredia had only officially owned the 33-room mansion for a decade, although her father, railroad magnate Henry Harvey Cook, had built it as a wedding present for her in 1893. She spent many a summer and fall at the cottage, before taking ownership of it and its 380-acre estate after her father's death in 1905.

One of four daughters of H.H. Cook and Mary McCay Cook, she married Signor Carlos M. de Heredia, count of Fuentes, in a private ceremony in 1891. Heredia, a Cuban-born Spanish nobleman raised in Paris, was most likely a titled royal with very little influence or inherited funds. But by all accounts, the count was a well-liked member of the Berkshire colony. The Cooks were American royalty by their own right. According to her obituary, the family was descended from Capt. Thomas Cook, an early settler and founder of Portsmouth, R.I. Her grandfather, Judge Constant Cook, built part of the Erie Railroad. "[Wheatleigh] was named for the ancestral estate of the Cook family in Wheatley, England," stated the obituary published by the New York Times on Dec. 15, 1946.

Built with buff-colored Roman brick by Peabody and Stearns, the house was designed to resemble a two-story, 16th-century Florentine palazzo. The 33-room main building had eight master and guest rooms, 10 baths and servants' quarters. On the lake facade of the building, two wings jut out from the central building, each ending in a windowless pavilion with a broad terrace in the center. A third pavilion, on the main facade side of the house, ended in a two-story aviary. The other estate buildings included a carriage house, dairy, ice house, hay barn and superintendent's house. A large water tower, also on the property was nicknamed the 'Poodle Tower' as the countess buried her beloved poodles — 21 in all — around it.

Following her father's death in 1905, the countess not only inherited Wheatleigh, but also a house on Fifth Avenue in Manhattan and a nice sum of money. Cook left each of his four daughters an inheritance that began with a disbursement of $15,000 a year for six years and then in the subsequent seventh year, a one-time payment of $2.5 million.

The de Heredias held lavish parties at the estate and also gave lavishly to many charities, often anonymously. In 1921, three years after the count's death, de Heredia gave the use of her gardens, which were originally designed by Frederick Law Olmsted, to Trinity Episcopal Church for its Sunday sunset services.

Upon her death in 1946, at the age of 81, the countess left the estate to her two surviving nieces, who sold the property to Joseph Lutske, a retired real estate dealer from Chicago, for $70,000. According to the Massachusetts Cultural Resource Information System, Lutske sold the main house, along with 21 acres to the Boston Symphony Orchestra for $25,000 just six months later. Lutske kept the rest of the land as an investment, eventually selling it off piecemeal — the majority becoming condos or privatized housing lots. The outer buildings were sold to Stephanie and Phillip Barber, a couple from New York, who opened the Music Inn, a self-styled music salon. The couple later opened a jazz school and purchased Wheatleigh from the BSO. They sold the Music Inn in 1960 to Don Soviero, but retained the historic estate, which they continued to manage as an inn, eventually leasing it to the Lenox Arts Center, which produced plays in the Great Hall until 1976.

In 1976, Wheatleigh was sold to David Weisgal and his fiancee, Florence Brooks-Dunay, a professional dancer, for $235,000. They ran Wheatleigh as a country inn until 1982, when current owners Linfield and Susan Simon fell in love with the property and purchased it

I listened to the gravel crunch beneath the tires of my car, as I drove down the long driveway, past a tennis court on my way to the luxury hotel known as Wheatleigh. In the distance, the Florentine-style palazzo, set behind a wrought iron gate and circular drive with a water fountain at its center, comes into view. Here ends the Berkshires and begins an Italian country estate.

I'm greeted at the door, not by a fancy front desk for check in, but by a valet perched at a small writing table next to the front door. He ushers me into the Great Hall — part foyer, part parlor — where I'm met by General Manager Marc Wilhelm, who notes that the high-end hotel is currently in a two-week cycle during which a limited number of rooms are available while others are taken out of service to be spruced up.

"Our guests expect perfection," Wilhelm says, as we tour the property. "We add a fresh coat of paint and repair things that are not up to our standards. We take the rooms out of service for three days during the week to make repairs. We're in between seasons right now, but our weekends are all booked."

In the Grand Hall, an ornate white fireplace captures the attention of those who enter. A chandelier, with a modern shade, hangs between it and a grand staircase. On the opposite side of the hall, glass doors open out onto the terrace.

"Nothing is fake here," Wilhelm said. "Everything is done properly. It's either original, restored or was custom-made to fit with the original items. When the owners renovated the property, they were very careful in the way things were done. The chandelier is original, but the shade is new — a way to make it modern but keep the original items."

He notes that one of the only noticeable changes was done to the cottage's terra cotta shingles, a less-than-ideal roof material in New England, which were replaced with slate.

We float from the spacious hall into "The Library," the 24-seat casual dining room, into the hotel's AAA five-diamond restaurant, "The Dining Room." Here the walls are covered in a felt to reduce noise and a pavilion has been enclosed to become a beautiful dining space.

Both restaurants, which feature different menus, are open to the public.

In the basement, tiled scenes depicting the process of making port wine line the walls outside the wine cellar, where bottles of wine line the crisp white walls.

"Most of our rooms have dark ceilings, but here and at Blantyre, the wine cellars have white ceilings," he says, pointing up. "It all goes back to the days of the Music Inn, when these rooms were discothèques."

From there we make our way upstairs, past original Tiffany stained glass windows that are bowed in the centers — a trick to help them survive the New England weather.

"We have 19 guest rooms," Wilhelm says as he shows me a guest room. "We're not a typical New England hotel. We still have our lake view. We're simple, elegant and understated, with all the amenities."

Back on the first floor he shows me much larger suites — three rooms carved from the house's original ball room. We head out to 'The Aviary," a two-floor suite, where Leonard Bernstein spent his summers when the BSO used the building as a dormitory.

"You have the feeling that you're somewhere in Europe, somewhere in Italy," Wilhem says as we make our way out to an oval-shaped in-ground pool, before making our way out to the terrace and formal lawn, where many weddings are held. "You can forget you are in the Berkshires while you are here."

Days Gone By: Images of Wheatleigh from The Eagle's archives