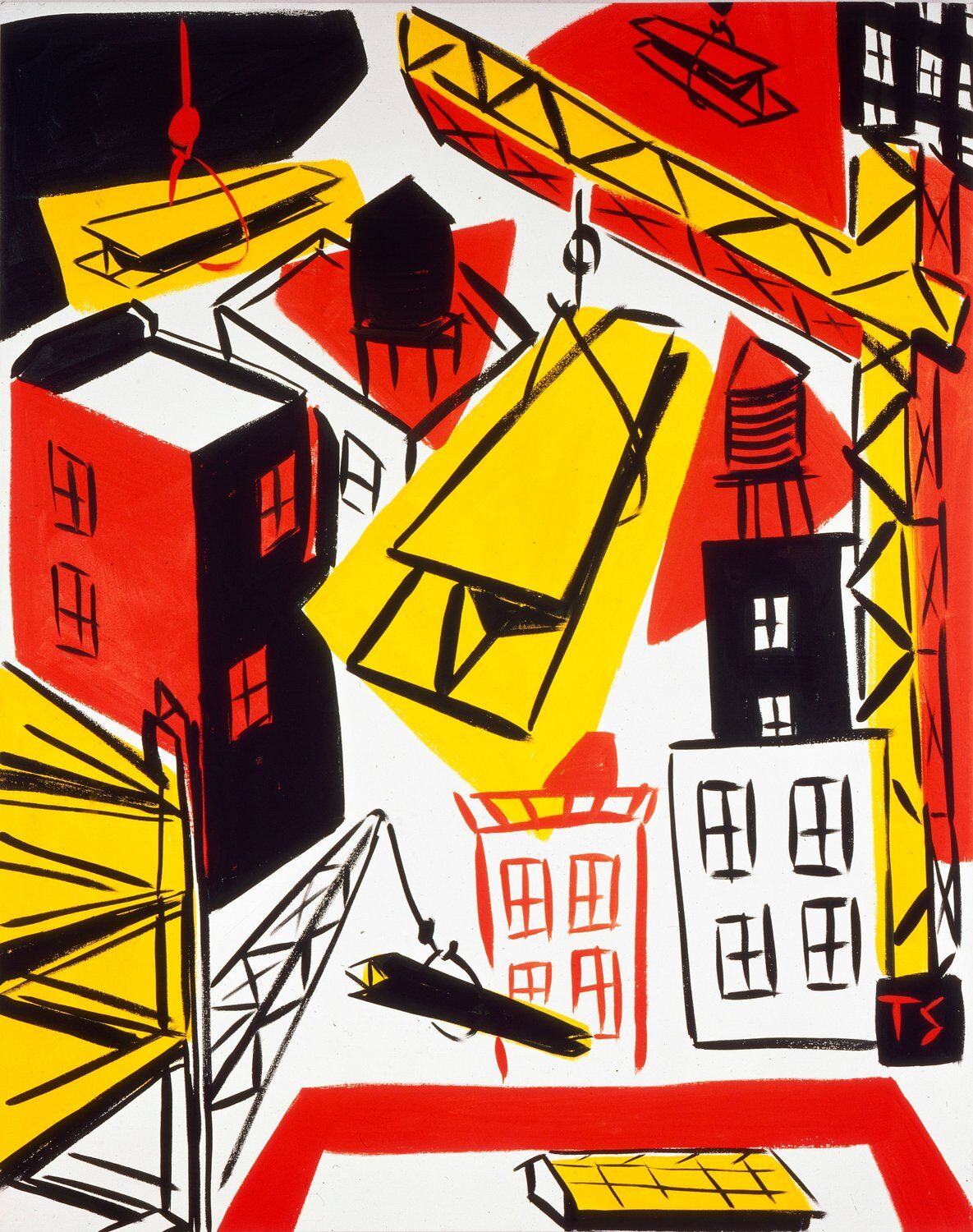 "Construction City" by artist Tom Slaughter will be on view at The Artist Book Foundation's gallery space from Saturday, March 30, through July 21. 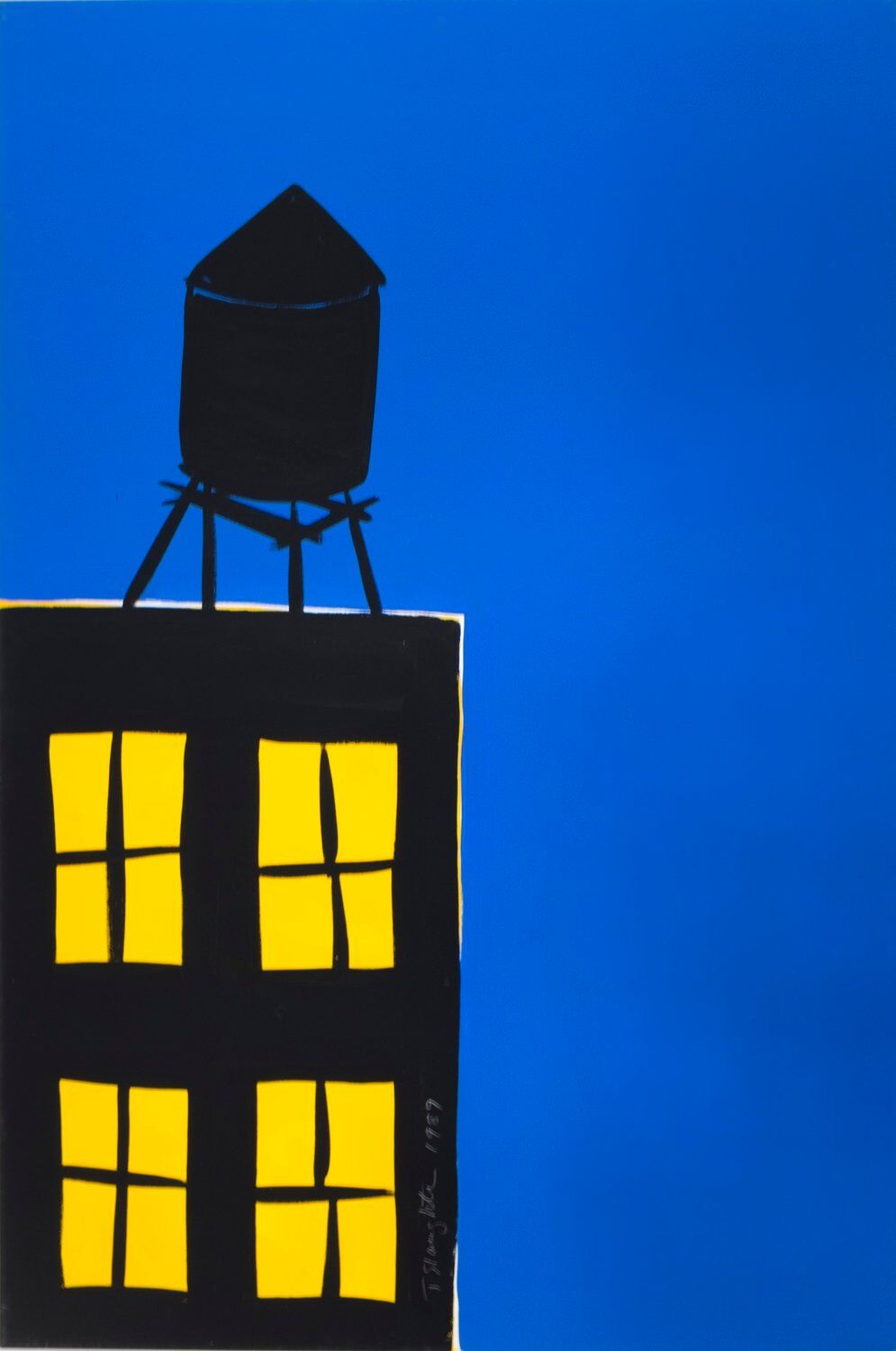 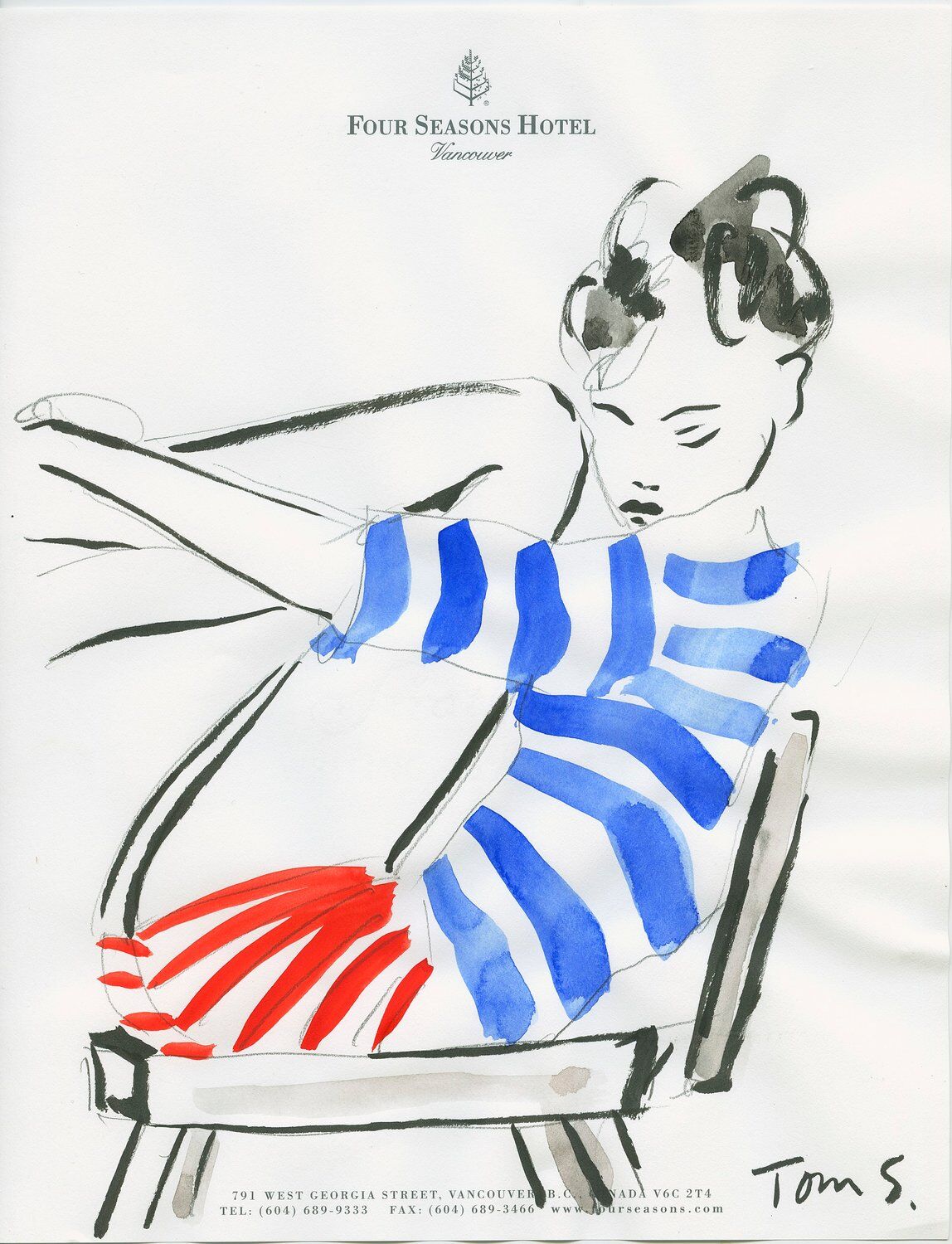 Later on in Slaughter's career, he illustrated 10 children's books and also produced figure-centric pieces on hotel stationery, like this piece "Century Box" that is part of the exhibit opening on Saturday, March 30, in North Adams. 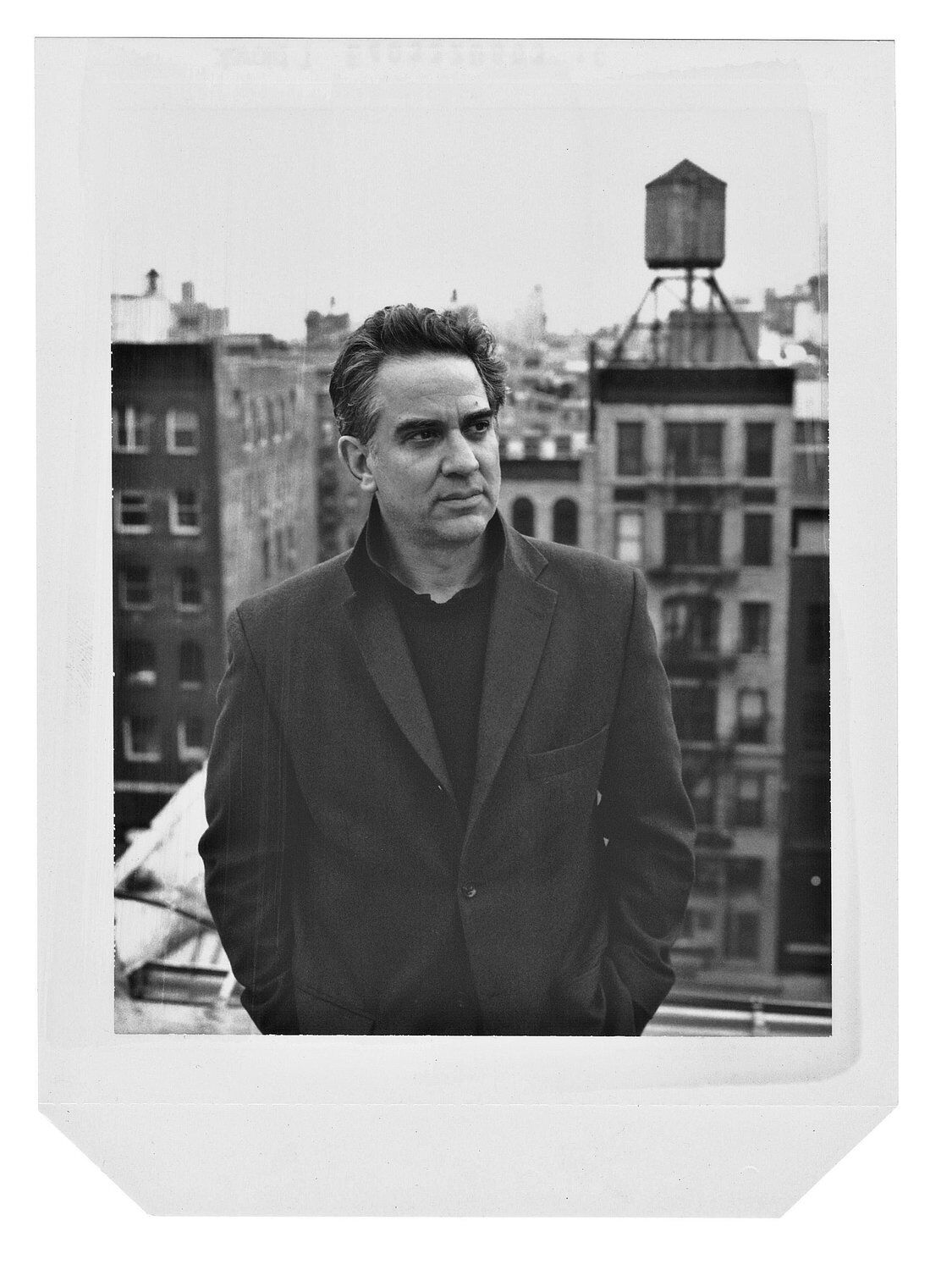 Artist Tom Slaughter's work has appeared in more than 60 shows across the U.S. and abroad. Some of his pieces currently reside in collections at the Cooper Hewitt, Smithsonian Design Museum; Whitney Museum of American Art and the Museum of Modern Art. 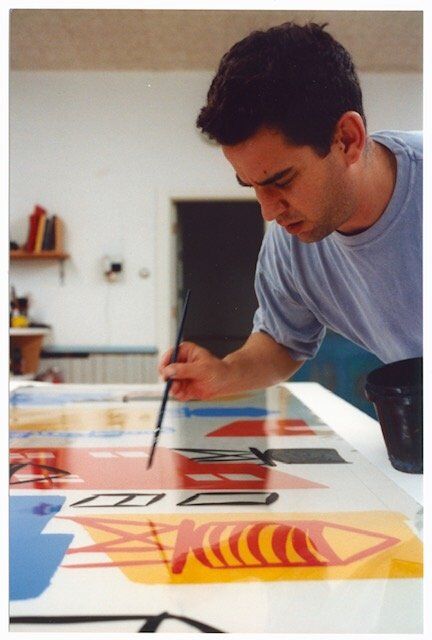 "Construction City" by artist Tom Slaughter will be on view at The Artist Book Foundation's gallery space from Saturday, March 30, through July 21.

Later on in Slaughter's career, he illustrated 10 children's books and also produced figure-centric pieces on hotel stationery, like this piece "Century Box" that is part of the exhibit opening on Saturday, March 30, in North Adams.

Artist Tom Slaughter's work has appeared in more than 60 shows across the U.S. and abroad. Some of his pieces currently reside in collections at the Cooper Hewitt, Smithsonian Design Museum; Whitney Museum of American Art and the Museum of Modern Art.

NORTH ADAMS — A great duality exists in New York. While the city is renowned for its vibrancy, much of its activity occurs after-dark, within shadowy structures on dim streets.

Artist and native New Yorker Tom Slaughter didn't just capture this contrast with his palette of primaries; he reimagined it. In Slaughter's urban landscapes, building facades could be impossibly red or yellow or blue, as if to advertise the creativity emanating from their insides. Water towers and cranes and metal also received this treatment on occasion. But he could just as readily fashion them in black, in that darkness visible to so, so many wandering eyes late at night in the city that never sleeps.

"The quality of freshness, the familiar world re-seen, from the water towers of New York City to the rural pleasures of boating, is the most immediately arresting aspect of Tom Slaughter's art," wrote Henry Geldzahler, the late Metropolitan Museum of Art curator of American art, in an introduction to a Slaughter series in 1989. "Strongly depicted large forms, most often in black over bold, bright colors, swiftly laid down, echo with resonances: [Fernand] L ger and Stuart Davis, Raoul Dufy and Roy Lichtenstein."

"You nailed it," Slaughter later wrote of Geldzahler's description.

This correspondence is detailed on one of the opening pages of "Tom Slaughter," a monograph of the painter, illustrator and designer that The Artist Book Foundation is set to release at a Saturday, March 30, launch party in its Louis and Susan Meisel Gallery. The event, which begins at 4 p.m., also serves as an opening reception for an exhibition of Slaughter's work. The second-floor space in Building 13 on the Massachusetts Museum of Contemporary Art's campus is displaying some Slaughter pieces that have never been shown publicly before, aiming to conjure his SoHo studio.

"He would be psyched, and that makes me feel happy about it," said Hannah Jocelyn, one of Slaughter's daughters, of the exhibition and book.

Concurrently, a 140-foot exhibit of Slaughter's imagery, titled "Icon Alphabet," lines a hallway at Mass MoCA. Jocelyn and her sister, Nell, sourced the show, while Jocelyn's husband, designer Jimmy Mezei, composed it. That trio also collaborated on the monograph. The Jocelyn sisters began breaking down their father's studio about a year or so after he died from brain cancer in 2014. They cataloged every piece they found, knowing that The Artist Book Foundation had an interest in publishing a monograph. It was a predictably overwhelming endeavor — their father wasn't exactly Marie Kondo when it came to the organization — but they forged on, finishing the project with help from Mezei. During the process, Hannah learned more about her father's work and its positive reception.

"This undertaking has really helped me understand who he was as an artist," Jocelyn said.

Born in 1955, Slaughter and his family moved from New York City to Connecticut during his youth. He lived in the West for a stint after graduating from Connecticut College with a degree in art history. But by the early 1980s, he was back in New York City, residing with the Jocelyns' mother, Marthe, in the SoHo loft he would occupy for the rest of his life. His first solo show came in 1989; over the next 25 years, his work would appear in more than 60 shows across the U.S. and abroad. Some of his pieces currently reside in collections at the Cooper Hewitt, Smithsonian Design Museum; Whitney Museum of American Art and the Museum of Modern Art.

"His art is joyous, even exuberant, and it brings pleasure to all who encounter it," The Museum of Modern Art Director Glenn D. Lowry writes in "Tom Slaughter."

At The Artist Book Foundation's exhibit, this zest initially manifests itself in a series of Flashe paint-on-paper vases. Slaughter often depicted objects in his work.

"Tom built a civilization mostly from things he liked; he was the maker of objects and he owned them as if they had never existed before," artist George Negroponte writes.

Deeper in the gallery, New York City comes into view. Its famous wooden water towers are everywhere in Slaughter's paintings, topping buildings that lean and rise and generate sharp angles made starker by their vivid colors. Cranes and a wrecking ball also appear, perhaps drawing from Slaughter's early years in construction. And windows, some illuminated in yellow, evoke F. Scott Fitzgerald's "The Great Gatsby." ("Yet high over the city our line of yellow windows must have contributed their share of human secrecy to the casual watcher in the darkening streets, and I was him too, looking up and wondering.")

A Flashe paint-on-canvas work near the back of the gallery titled "Untitled (Dusk City)" exemplifies the artist's fascination with negative space. A building's corner, windows awash in yellow, occupies the painting's bottom-left corner. A water tower stands atop the structure. A dark-blue sky fills the rest of the canvas.

"Tom always saw the negative space. In his art and his life, the edges and corners were boundaries to a larger, more enigmatic vision," friend David Marshall Grant writes.

Later on in his career, Slaughter illustrated 10 children's books. He also produced figure-centric pieces on hotel stationery. The exhibit displays some of them around a bend by the gallery's entrance. Slaughter's line work and overall approach draw comparisons to Henri Matisse's in the monograph.

"Like Matisse, he wasn't afraid of a crooked cut, or a color too rich, or an imperfect pattern," Slaughter's daughters write.

Near the end of his life, Slaughter spent more and more time at a summer home in Long Island. He began capturing the area's spirit with his art, according to Jocelyn.

"That was something he was really good at," she said, "distilling the essence of a place."