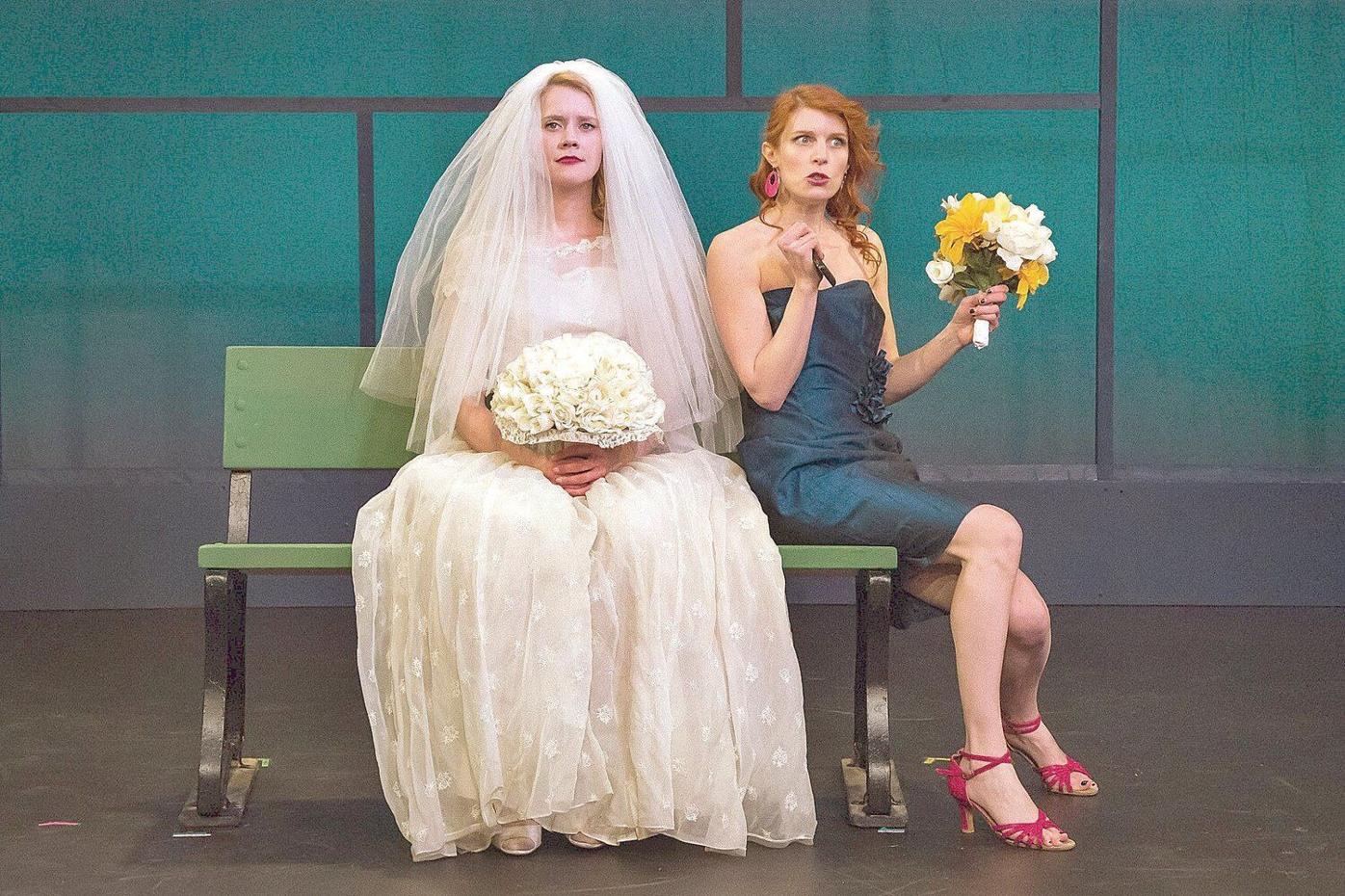 Sarah Goeke, left, and Keri Safran in Brad Sytsma's "Cold Feet" from last year's 10X10 New Play Festival at Barrington Stage Company. Safran is one of two 10X10 Festival veterans who will be returning for this year's festival, which begins performances Thursday and runs Thursdays through Sundays through March 8 at BSC's St. Germain Stage. 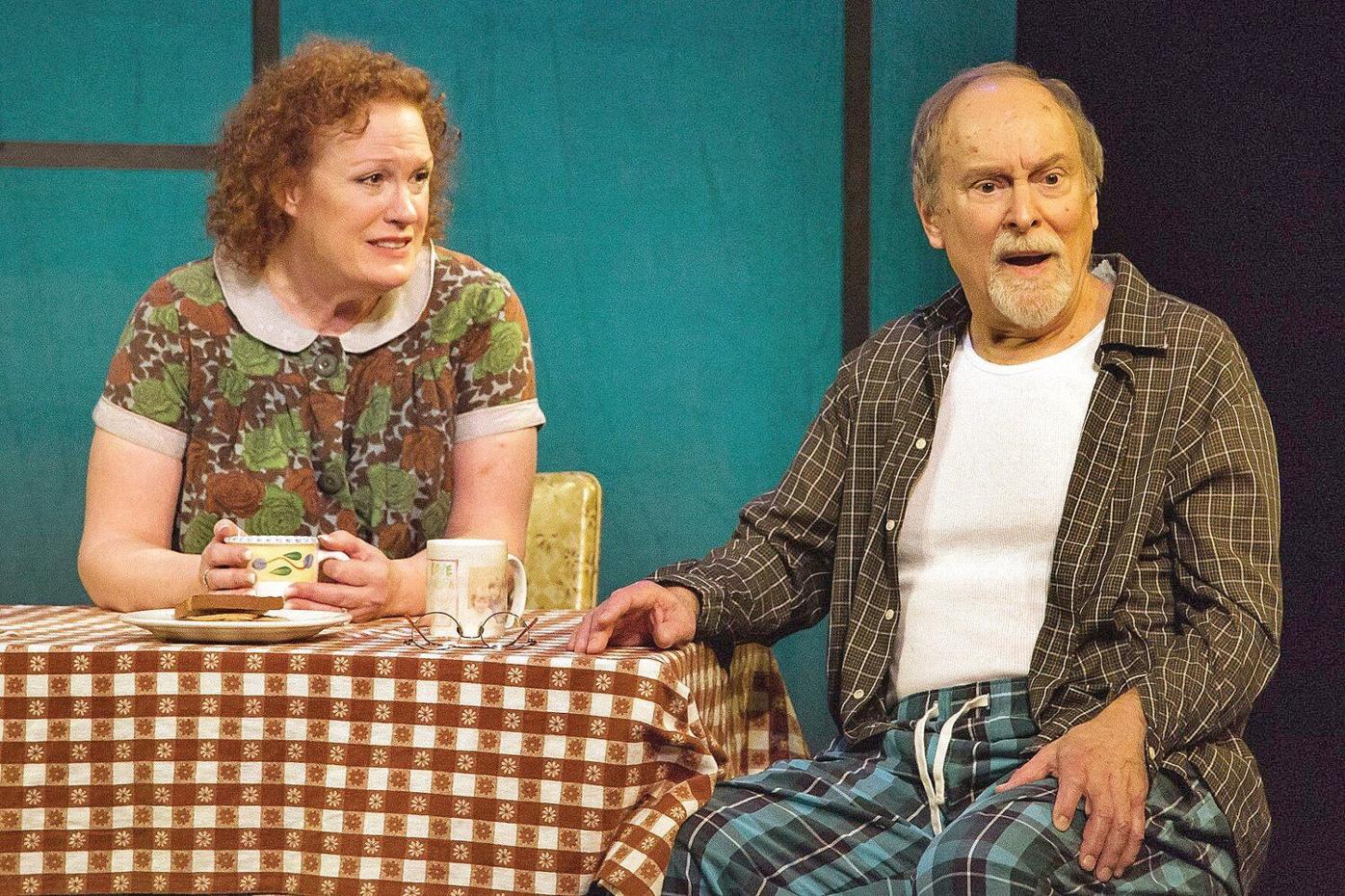 Sarah Goeke, left, and Keri Safran in Brad Sytsma's "Cold Feet" from last year's 10X10 New Play Festival at Barrington Stage Company. Safran is one of two 10X10 Festival veterans who will be returning for this year's festival, which begins performances Thursday and runs Thursdays through Sundays through March 8 at BSC's St. Germain Stage.

PITTSFIELD — When attending a play, an audience member is not supposed to be aware of all that is taking place before, around or during a performance. Things are just supposed to look very smooth and efficient.

For example, when a person exits in jeans and later returns dressed fancier, that's normal. When a scene begins in daylight and continues through the evening the changes in lighting should seem natural.

No one should be thinking about the costumer pinning a dress or a pair of trousers so they fit perfectly.

And the guy in the light booth is supposed to be creating a mood so you don't even realize the passage of time.

However, when a theater puts on 10 different plays in a two-hour period (even if each of those plays is only 10 minutes long), you can't help but wonder how much work and planning went into the production. When such an experience is free from distraction, you do notice.

That's what is happening at Barrington Stage Company in downtown Pittsfield. They are producing their Ninth Annual 10X10 New Play Festival, which begins Thursday — press opening is 3 p.m. Sunday — and runs through March 8 in BSC's St. Germain Stage at Sydelle and Lee Blatt Performing Arts Center on Linden Street. Their plan is to offer 10 different 10-minute plays without disrupting the flow of the evening while offering the audience a fun-filled experience.

Artistic director Julianne Boyd says to accomplish that goal it does take a lot of planning. As she describes it, a lot of the early stages are back-of-the-mind planning.

For instance, for the nine years they've been doing this they use one basic background that fits all 10 plays.

This past summer, they designed a whimsical set specifically for the comedy "Time Flies." She says, "When I saw it on stage, I commented to someone, `That is so much fun, it will be perfect for the 10X10 Festival.' So we saved it."

Other issues are more complicated. Some things cannot be decided until the plays are selected.

Boyd says this year, they received 260 submissions, which they had to pare down to a final 10. Adding to the complexity, the 10 plays have to have variety. The preference is comedy.

Says Boyd, "Some are skits, some are plays. The event is about having some fun in the middle of winter," she says.

She emphasizes that the idea of having fun goes for the artists as well as the audience.

Without demeaning the level of quality they intend to offer, she says "You get what you get." She was speaking mostly in terms of budget.

Costumes are pulled from wardrobe and tailored for the actor, but nothing is designed for a character.

As an example, she mentioned one play, "Oy Vey Maria," (a title she can't say without giggling). Without giving anything away, it takes place in biblical times.

"We found this really fancy bathrobe and I asked our costumer 'Can you find a cool sash to make it more specific?'" Laughing again, she said "That's how we do it. Everything is done on the fly, with a spirit of fun."

The 10 plays are divided between two directors. Boyd will direct five and Matthew Penn, who is returning for his fourth season, has the other five.

They have six actors to share between them. They try to cast to cover most ages. One couple should be able to play people in their 20s and 30s, another couple 40s or 50s and a couple who can play older characters.

Obviously, no play should have six characters. But it is still a jig-saw puzzle, using performers in such combinations that one performer isn't cast in three consecutive plays.

This year, two of the six actors — Keri Safran and Peggy Pharr Wilson — are regulars at 10X10. Making their BSC debuts are Doug Harris, Maya Loren Jackson, Peter Macklin, and Kenneth Tigar."The one thing we make clear to the actors is there is no leisure time," said Boyd.

"We have only nine days of rehearsal. If you don't show up knowing your lines, you will never catch up. However, if you arrive prepared, you will have a lot of fun. This is as enjoyable for actors as it is for the audience. People love coming back."

Boyd points out that the 10X10 Play Festival is part of the City of Pittsfield's 10X10 Upstreet Arts Festival at which 65 events take place, inside and outside, at 20 different venues.

"For this reason we keep our prices low. We do not make any money on this event. It's for the community and to find some joy in the middle of winter," Boyd said.

As for descriptions of the plays' content, Boyd says only, "It's all about fun, with a few serious pieces thrown in. I take the approach that if you don't like one of the plays, wait a couple of minutes, another will be along shortly."