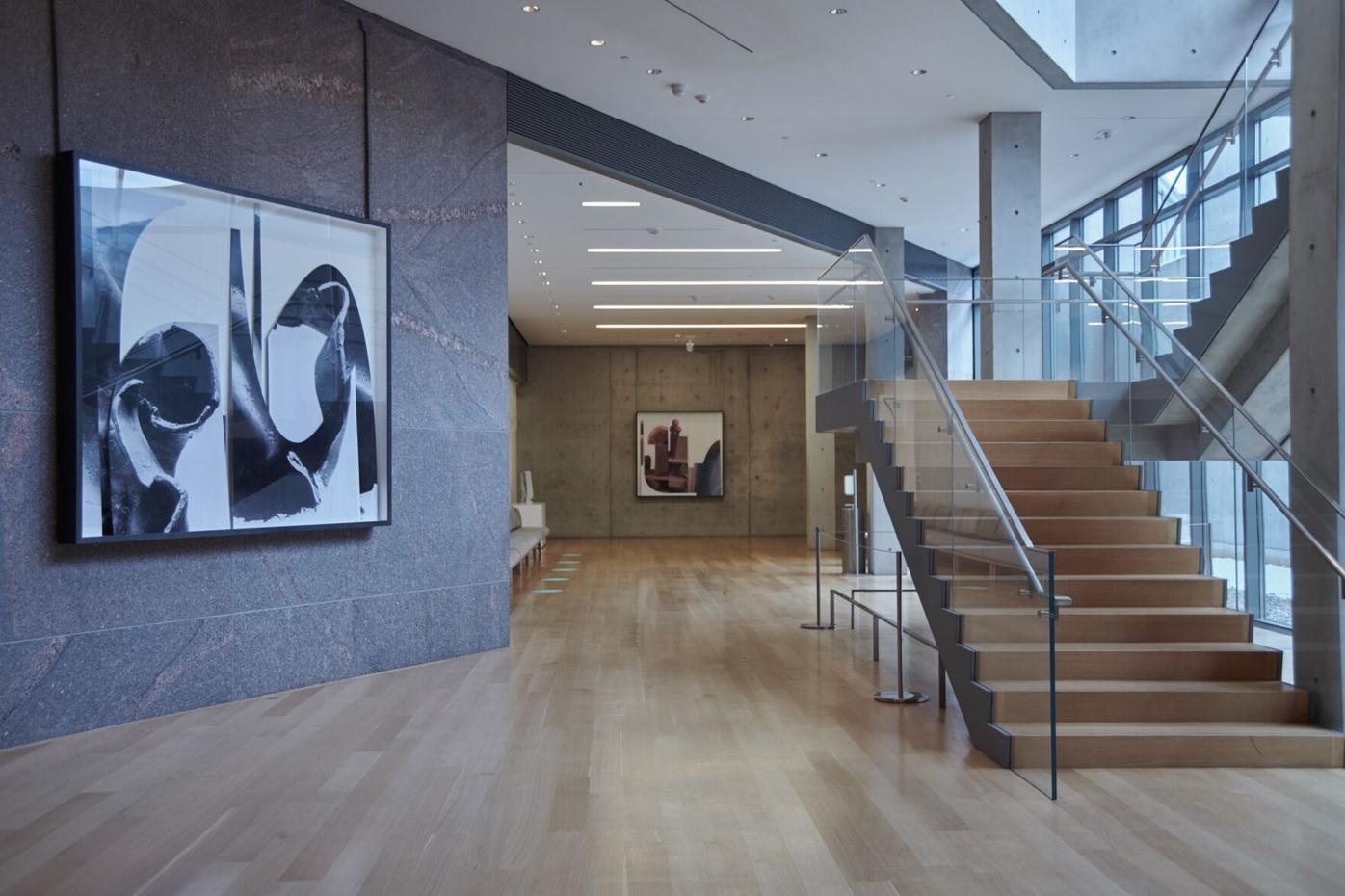 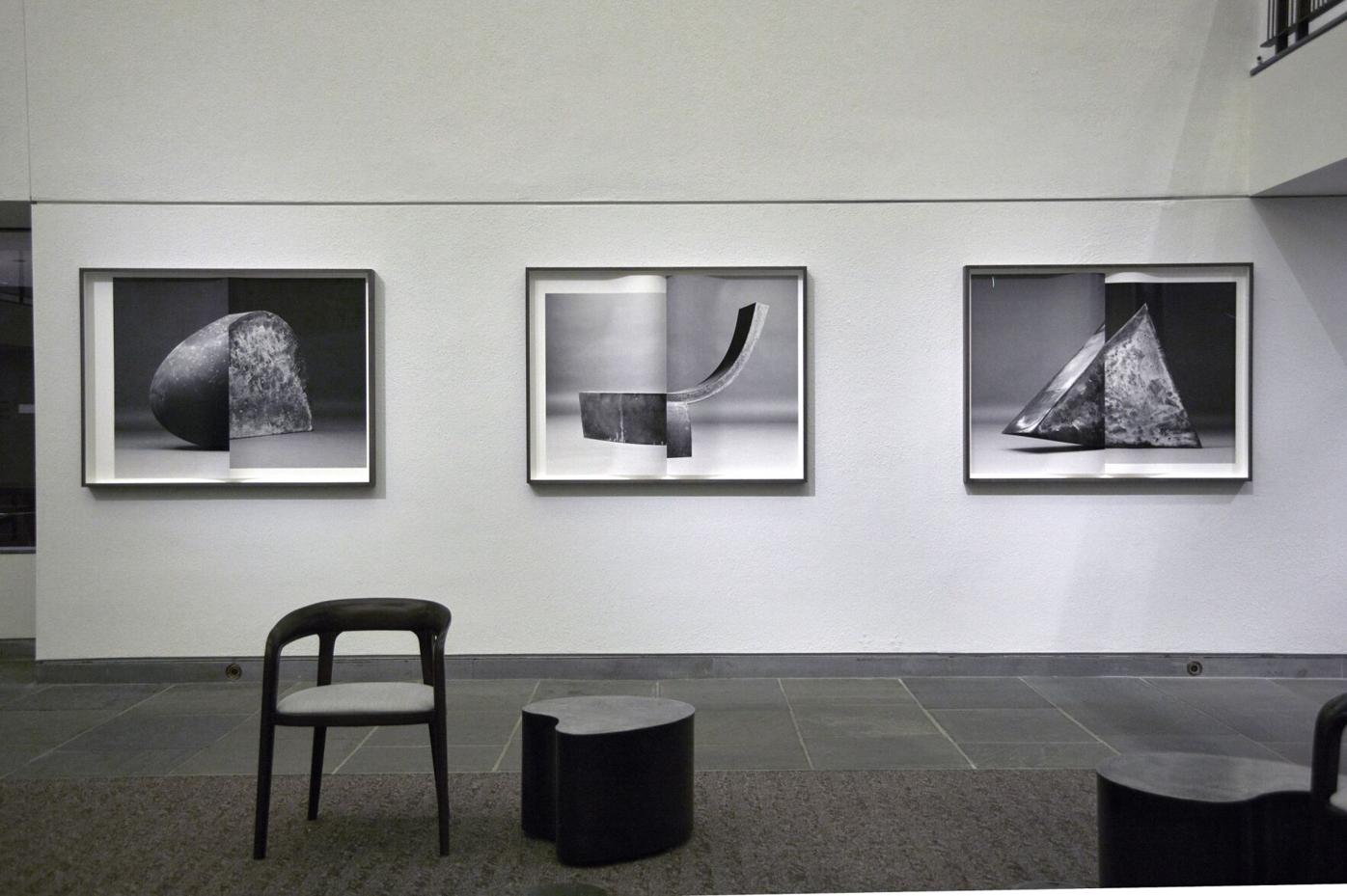 "Fig. 11," "Fig. 3" and "Fig. 9" by Erin Sherriff are three of four works from her series, "Figs." on display in the Reading Room of The Clark's Manton Research Center. Art appears courtesy of the artist and Sikkema Jenkins & Co., New York.

"Fig. 11," "Fig. 3" and "Fig. 9" by Erin Sherriff are three of four works from her series, "Figs." on display in the Reading Room of The Clark's Manton Research Center. Art appears courtesy of the artist and Sikkema Jenkins & Co., New York.

It requires "forensic attention to detail" as "things often aren’t quite what they seem," says Robert Wiesenberger, associate curator of contemporary projects at the Clark Art Institute.

Working across mediums, Sherriff uses photography, sculpture and video to shape and reshape two-dimensional and three-dimensional works of art as she explores what happens to an artwork once it enters the public record and is interpreted and re-interpreted by society and art historians.

Her work is the subject of a yearlong exhibition, "Erin Shirreff: Remainders," in public spaces at The Clark — the Reading Room of the Clark’s Manton Research Center and the lower Clark Center — which are accessible when the museum is open without an admission fee. The exhibit is the second yearlong installation in the Clark’s public spaces that Wiesenberger has organized as part of an ongoing series. The first was Pia Camil's "Velo Revelo."

"Erin's questions of art history, of how it is written and the mythmaking behind it are very relevant in relation to The Clark, as it is not just a museum, but also a place of academic and education programming and research," Wiesenberger said. "She's asking us to look more closely at how art history is written, how its dogma is formed."

One question Sherriff has explored in her work over the last decade has been the qualitative difference between experiencing a sculpture in person versus that of experiencing its reproduction in a photograph.

There are, after all, obvious deficits that arise when three-dimensional objects are presented in a two-dimensional format, such as an ambiguity of scale and context; the inability to view the sculpture in full. And with those missing pieces in mind, one would anticipate an in-person visit with a sculpture to be more rewarding. But Sherriff, herself, had the opposite experience after making the trek to New Jersey to view a Tony Smith sculpture. She was enamored with a photograph of the sculpture, but described her visit as "flat" in a 201 video interview, "Erin Shirreff & Tony Smith Go Way Back," with Art21.org.

"There was way more mystery and romance in the image," she said during the interview.

As part of her exploration of personal experience, Sherriff began creating maquettes of geometric sculptures, reminiscent of mid-century modernists including Smith, Alexander Calder and Henry Moore. Made with colored plaster and sometimes foam, the tabletop-sized models are built to scale for the camera. After photographing the maquettes, she creates composite images with editing software, which she prints at large scale as a single sheet. The prints are creased down the middle and made to look like pages of an open book.

On view in the Manton Research Center's Reading Room are four selections from "Figs.," her current series of maquette images. It's title references the way illustrations are commonly named in art history books (e.g., “See figure 1”).

"I was thinking about how we now learn about a lot of this work exclusively through looking at them in images; that a lot of the experience of them, the experience of being in the spaces with them, how critical that was to their meaning, is now, of course, lost in terms of how we are learning about them in our art history books," she said, during a San Francisco Art Institute visiting artist lecture.

The images on display, like those found in art history books or in compilations, are ambiguous in scale; offering an incomplete picture, their textures and compositions aren't quite clear. The images suggest that pages are missing from the books, even if the pages don't appear disjointed at first. A closer inspection reveals even those images that look whole are not.

In the lower Clark Center, near the Clark's café, two of Sherriff's large format dye sublimation prints — photographs printed on cut pieces of aluminum arranged three-dimensionally within a deep-set frame — and a silent film, "Still," are on view.

"Bronze (Slivka, Burckhardt, Busch, Laocoön)," and "Four-color café terrace (Caro, –––––, Moorhouse, Matisse)" are both explorations of how a work of art can be transformed by another medium.

For "Bronze," Sherriff scanned an image of David Slivka's sculpture, Laocöon, taken by photographer Rudy Burckhardt that she found in an 1960s anthology edited by art historian Julia Busch, and enlarged it until its halftone printing is grainy. She then printed the image on aluminum sheets, cut the sheets into various shapes and layered within a deep-set frame.

Similarly, "Four-color café terrace (Caro, –––––, Moorhouse, Matisse)" is based on a photograph of sculptor Anthony Caro’s The Moroccans that appeared in a monograph edited by Paul Moorehese. Caro’s sculpture is based on a painting of the same title by Henri Matisse.

"There's a geometric simplicity that might remind you of Matisse,"  Wiesenberger said. "Her work always has a lot of layers."

Where: Public spaces in the lower Clark Center and the Reading Room of the Manton Research Center. The Clark Art Institute, 225 South Street, Williamstown

Admission: Art on view in The Clark's public spaces is free during museum hours of operation, 10 to 5 p.m., Tuesday through Sunday.

What: Shirreff discusses her work and current exhibition at The Clark with Robert Wiesenberger, associate curator of contemporary projects.

Where: Live broadcast over Zoom. Registrants will receive an email with a private link to the webcast before the event.