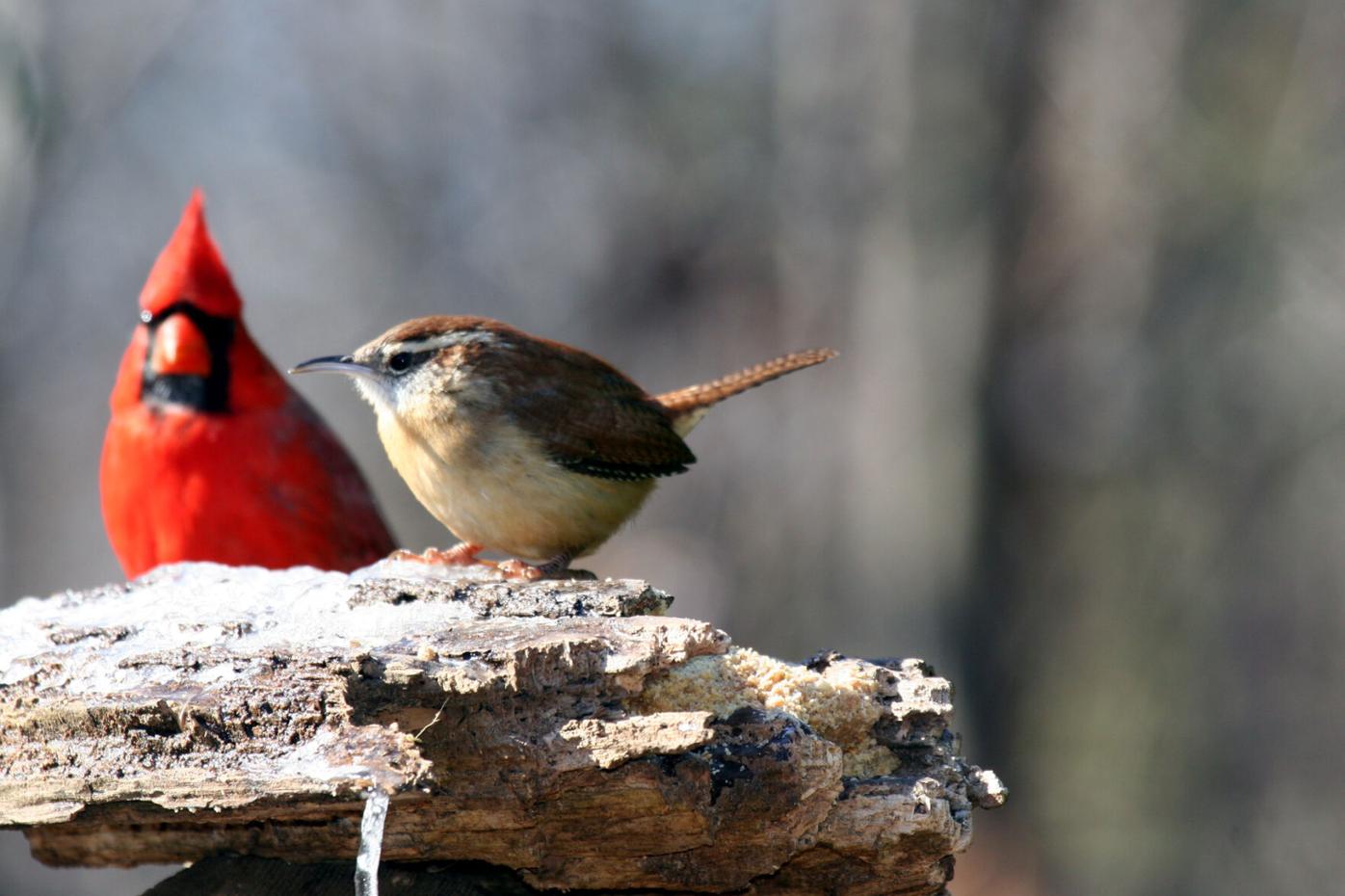 A Carolina wren is involved in a stare down with a cardinal over some backyard territory. These wrens are not normally seen this late in the winter in the Berkshires, but one reader spotted one recently. 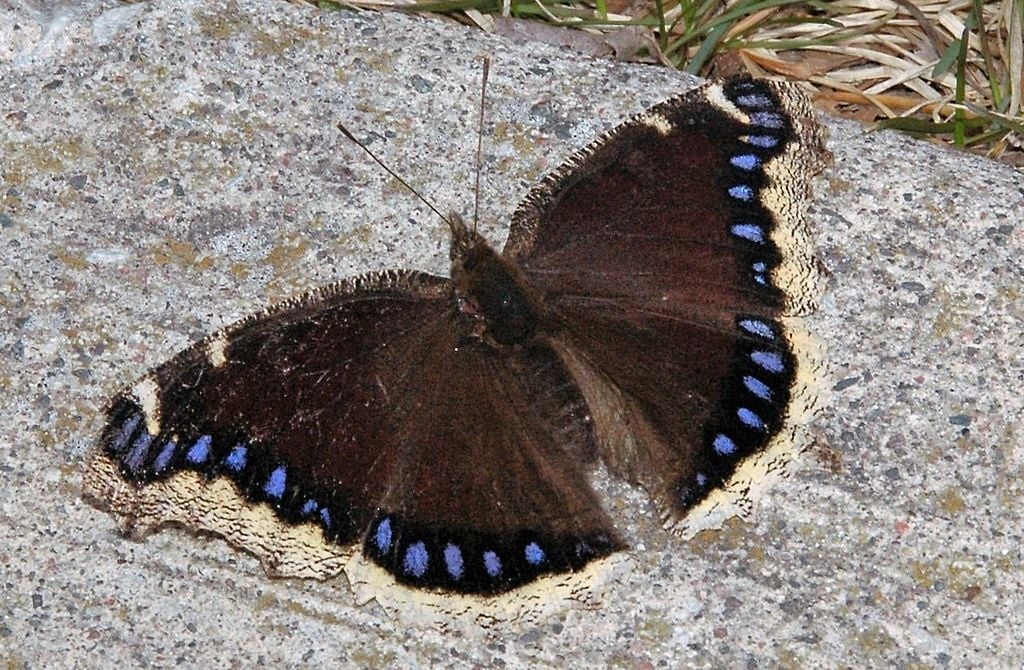 Mourning cloak butterflies are not normally found in the Berkshires this late in the winter.

Q: A Carolina wren visited our feeders last Saturday, and I’ve spotted it most days since, including today. It is adorable! It seemed to enjoy the sunflower seeds and suet equally and was the first to find the latter within 5 minutes after I hung it on a tree!

Do you know if these commonly winter over in Berkshire County? I read where they’ll migrate further south during severe winters.

It’s the first time I’ve ever seen one, so I’m hoping you can offer some information. Also, maybe an opinion if you think this single bird might be an unfortunate straggler? There seems to be just one bird.

A: The Carolina wren lived up to its name, originating in the South, until recently. So, it does find difficulty during harsh winters in New England. Our winters are not always that bad in recent years, however. It wasn’t until 1931 that one was seen locally (in Williamstown). And it wasn’t until 1941 when another was seen. They returned to breed in 1975 and have been getting more common since then, with population dips during, as I mentioned, harsh (very cold) winters.

They are fun birds to have around unless they nest in your clothespin bag. Often they find near ridiculous places to nest, for instance, one of those Berkshire Eagle green plastic tubes, in sheds and other odd spots for a wild bird.

Q: I should have written earlier; is it late to see [a] dark butterfly with cream margins to the wings in early November? It was in Williamstown when I was walking behind The Clark museum. Can you think what it might be?

A: I have never heard of an active mourning cloak butterfly that late in the Berkshires, but fall has not been frigid and following chills, it has warmed. I will say it is a species that overwinters and could not make up its mind what to do. I saw them as late as Sept. 18 a few years ago while walking the paths at the summit of Mount Greylock. There were dozens of them, and I thought it might be late emergent before I found out some migrate.

Q: I often wonder how you tell a boy from girl nuthatch and chickadee. They all look the same to me. And I have watched many of them at the feeder.

A: Looks are sometimes not everything. I am not sure if it is possible to distinguish between male and female black-capped chickadees without an internal inspection.

And in this case, the dominant (pushy) bird is more likely to be the male except during mating. The white-breasted nuthatch is possible with a little concentration and practice. Look at the dark head patch. In the male, the patch is what some might call jet black. In contrast, the dark patch on the female is lighter. And although I do not see it, it has a grayish sheen. Males are also male — they are pushy.

Q: I’m unsure when it’s safe to fill our bird feeders. When do bears usually hibernate? Has it been too warm?

A: A timely question, although, if you have been following Naturewatch, you may have noticed numerous readers successfully feeding birds. They are the lucky ones. And a good number have lost feeders to the bears.

With the apparent change in weather and the lesser amounts of snow and frigid weather, male bears, are remaining active longer. And some may not den up at all provided they can find ample food. Dumpsters abound, as do trash cans. And yes, a bird feeder here and there offers a treat. Females carrying young are most likely already denned.

To clear things up, bears do not hibernate, at least deep hibernation, like the woodchuck. And those that den up have found a place by mid-to late-December. To conserve energy, their heart rate and respiration do drop. However, body temperature drops only slightly to around 88 degrees from the average summer temperature of 100. Again, the primary reason for denning is hunger, as I understand it. And they are not always fortunate enough to find a cave or suitable rock crevice, and then will curl up under a brush pile or wait to be covered by nature’s blanket — snow.

Black bears typically den in caves, brush piles, depressions under fallen trees, or rock crevices. One year I saw a bear squeezed into an old rotten tree with its backside open to the weather. Occasionally a bear will curl up on the ground and wait to be covered with snow.

By not being deep hibernators, they can rouse and search for food during warm spells, so if you are in bear territory, place a feeder where bears cannot possibly reach them. For instance, unless one learns how to scale the house’s side, our bird feeders are safe, except from the bothersome gray squirrels.

We have spotted evening grosbeaks three times this fall — about 3 to 4 dozen in early November, then a dozen a few weeks later, and, yesterday, Dec. 9, there were five at my feeder. We are in Williamstown, off the Taconic Trail.

Answers from naturalist Thom Smith: Why aren't birds coming to my new feeder?

Q: We have had a bird feeder with the sunflower seed you suggested for about a month now, and still no birds have found it. We supported it on…