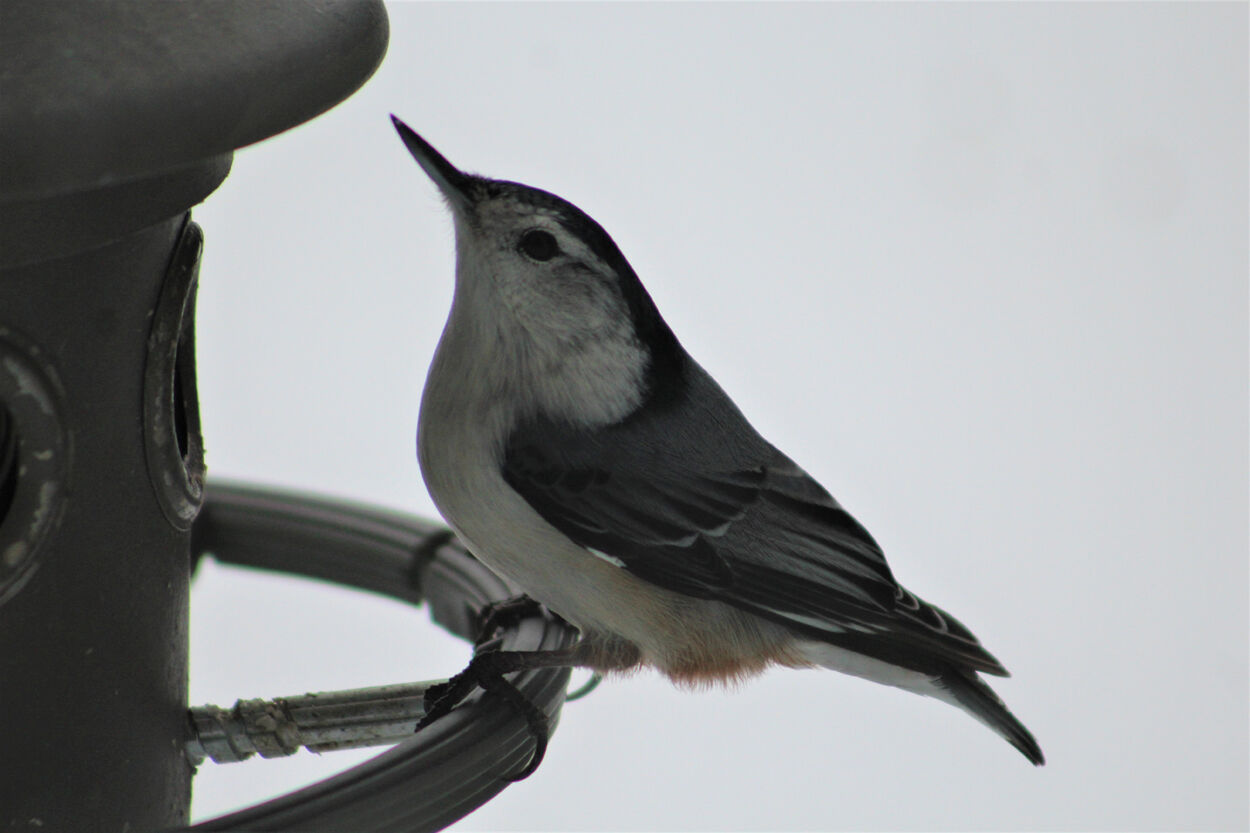 This nuthatch, and its relative the red-bellied titmouse, are most often seen climbing among branches and trunks of trees, except when a suitable bird feeder is available. 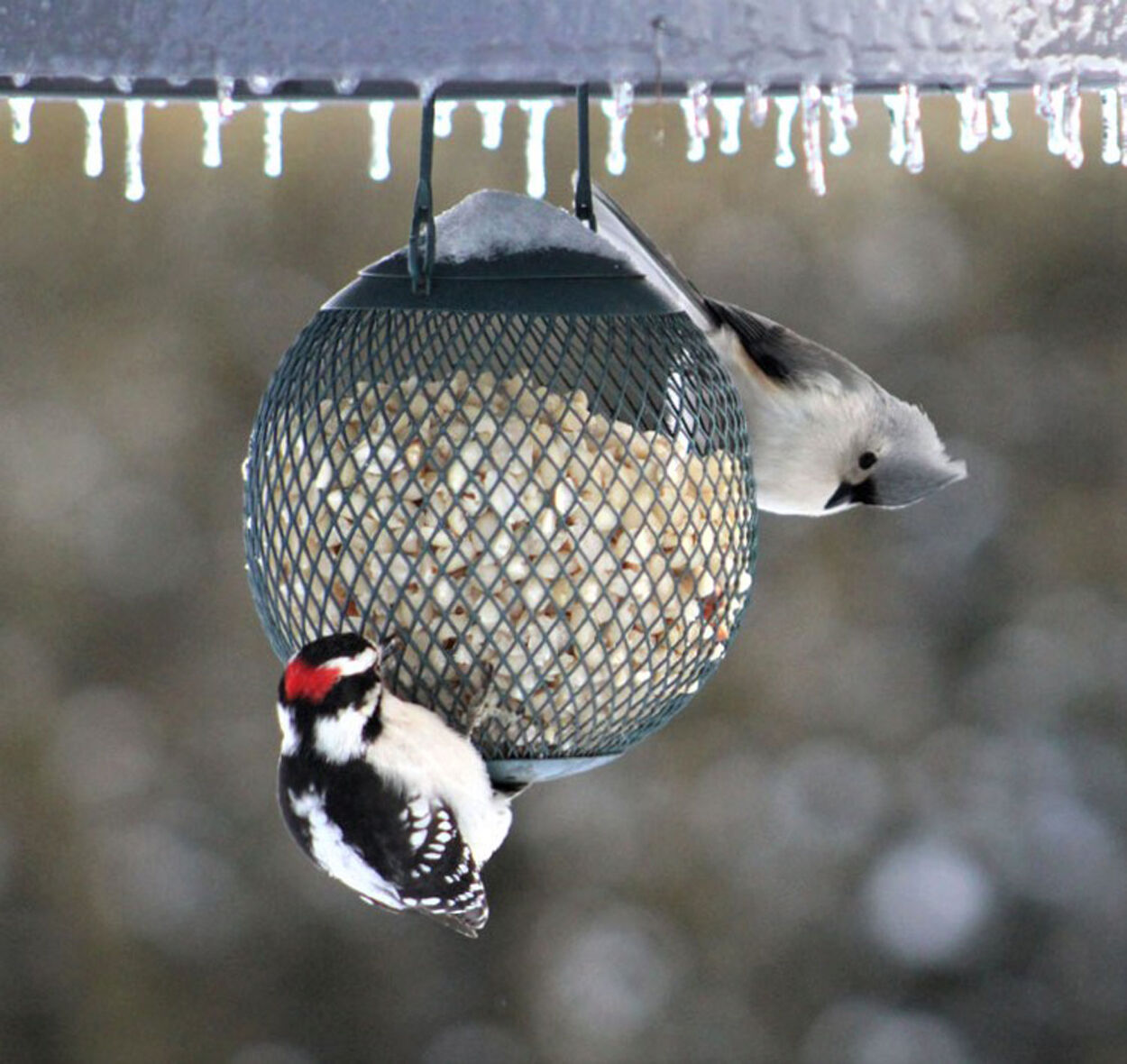 The Downy Woodpecker is the most common woodpecker in the Berkshires and is here year round. The tufted titmouse is a rather new comer; the first nesting recorded in Pittsfield was in 1964, and it is now found throughout the Berkshires. 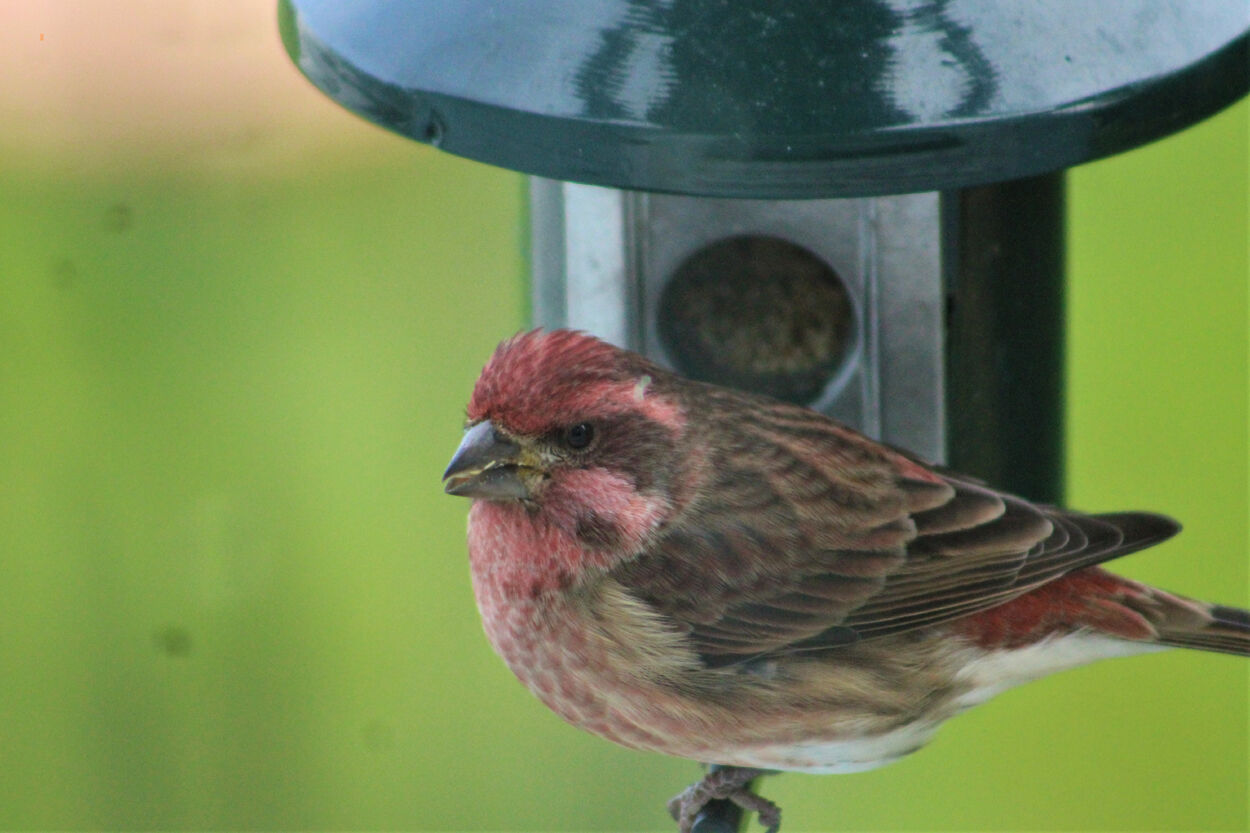 Purple finch are northern birds that some years migrate south to spend the winter.

This nuthatch, and its relative the red-bellied titmouse, are most often seen climbing among branches and trunks of trees, except when a suitable bird feeder is available.

The Downy Woodpecker is the most common woodpecker in the Berkshires and is here year round. The tufted titmouse is a rather new comer; the first nesting recorded in Pittsfield was in 1964, and it is now found throughout the Berkshires.

Purple finch are northern birds that some years migrate south to spend the winter.

Q: I have two bird-feeder questions: Are the inexpensive mixes worth getting? And if we want to have cardinals, what kind of seed should we have?

A For a number of years, I would purchase safflower seed as the “experts” suggested it. Then, when I began feeding black oil sunflower seed (BOSS), I noticed the cardinals would choose that over the “tried-and-true” safflower. And when I upgraded to BOSS hearts (shelled), they became addicted to that to the point that I no longer offered safflower. My suggestion is providing the shelled BOSS.

I was in a “big box” store and, while there, I went to the wild bird aisle to see what assortment of feeders they had, when this couple noticed the frown on my face — COVID-19 mask and all — as they picked what was probably a 35- or 40-pound bag of the less expensive “wild bird seed.” I offered the answer they had not yet asked: Unless you want to feed wild turkey, ring-necked pheasant, pigeon and mourning dove, it is probably not a good idea, I told them, as it is loaded with milo (sorghum), the larger round reddish seed — and few birds like that seed. The Wild Bird Feeding Industry, a trade group for bird seed manufacturers, warns on its website that seeds, such as milo, are “less attractive to birds.” Even so, milo makes up a good part of many inexpensive commercial bird seed mixes.

There is not much of the small seed variety, if any, like millet, Nyjer, safflower and sunflower that appeals to many of the small-seed eaters. True, there are some sunflower seeds, but probably not the most sought-after black-oil variety.

The couple, new residents in West Stockbridge from New York City, never had feeders before, and took my word and decided to check a few other stores I suggested, including one in their town.

Keep in mind: It sometimes takes a week or two for the birds to find new feeders! If neighbors have feeders, the birds will find new feeders much more quickly. For years, I had to scatter seed on the ground or deck for the dark-eyed junco, until one winter’s day when a fresh snow covered the seed, one courageous junco followed the other birds feeding at a hanging feeder. Apparently, this junco showed the way for others of its kind. Today, while they take seed from the ground when I spread it, others will gladly feed at the feeders.

Safflower seed will attract cardinal, grosbeaks, titmouse, (when sunflower is not available).

Seed is not the only food to offer to wild birds. Suet in a variety of inexpensive cakes and peanuts (sold for birds) attract many species. I have seen many different woodpeckers, including downy, hairy, red-bellied, yellow-bellied sapsucker, flicker and, as a young teen living with my parents, a pileated. Also, house and gold finch.

Offer either cakes or chunks from the meat market. These also attract black-capped chickadee, white-breasted and red-breasted nuthatch, Carolina wren, blue jay, starling and more. Offer suet in a suet feeder or make a basket out of 1/4-inch wire mesh. Feed peanuts in a proper feeder or peanut butter in a drilled-out piece of wood or a thick, 1-foot branch.

Some of the birds that enjoy suet are black-capped chickadee, woodpeckers, nuthatches, finches and Carolina wren. Offer suet in a suet feeder.

And wintering robins and bluebirds (and maybe cedar waxwing) will delight in freeze-dry mealworms, although, some offer them live mealworms purchased at pet shops; apple and grapes, BOSS hearts and suet.

Q: I have never seen this odd little bird before. It’s brown with some white stripes and, from what I could see, has a white belly and a long curved bill. I think it wasn’t any larger than 5 inches.

It didn’t go to a feeder hanging from the tree that chickadees and nuthatches go to all the time, but when I saw it for the first time it was about a foot above the ground and was climbing up the tree. It didn’t climb straight up, but worked around the trunk as it made its way up. After a while, it came all the way around and kept going around as it made its way up. Near the top among branches it flew away to another tree. I didn’t see which tree it landed on, but like the first time it caught my eye climbing up the tree, too.

A: If all you told me was its color, I might never have guessed it. The giveaway, and there are two, are the curved bill and its spiraling up the trees. The bird is a brown creeper, and an exciting little resident that acts so different, and as a species is here all year.

What is confusing is, “being here year-round,” because as a species it is seen throughout the year, but it may actually be a migrant, with the winter ones arriving in late September and the summer ones arriving between April and early May. You are lucky to see one as they are not easy to spot, even though they are considered a common resident.

If it stays, fasten several small pieces of meat-market suet to the tree. I have read they will sometimes feed on suet.

Thom Smith: Snakes, spiders and ticks, oh my! What we really should fear this Halloween

Fear of snakes stems from superstitions, but can stimulate a response that causes panic among some people.