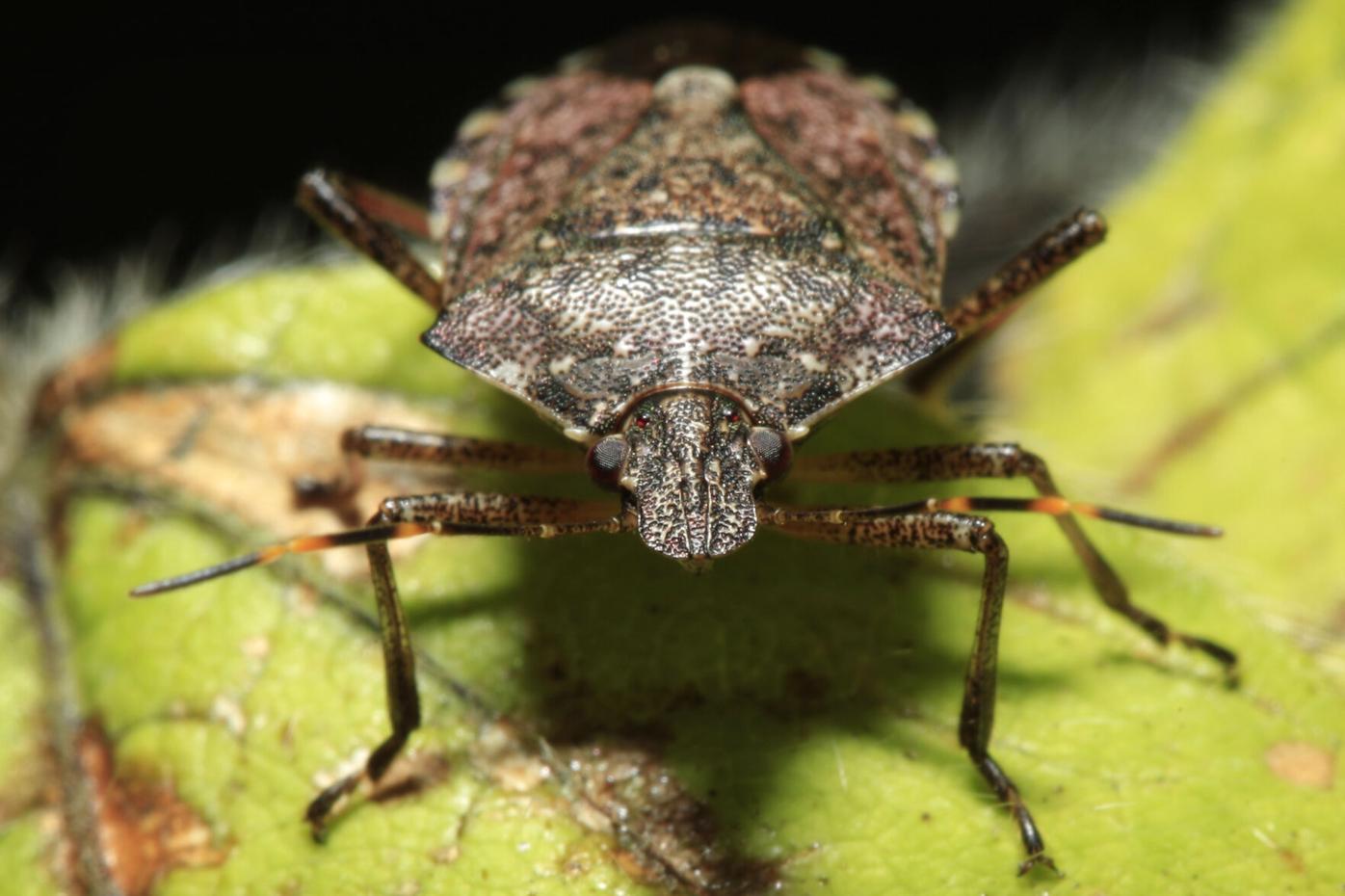 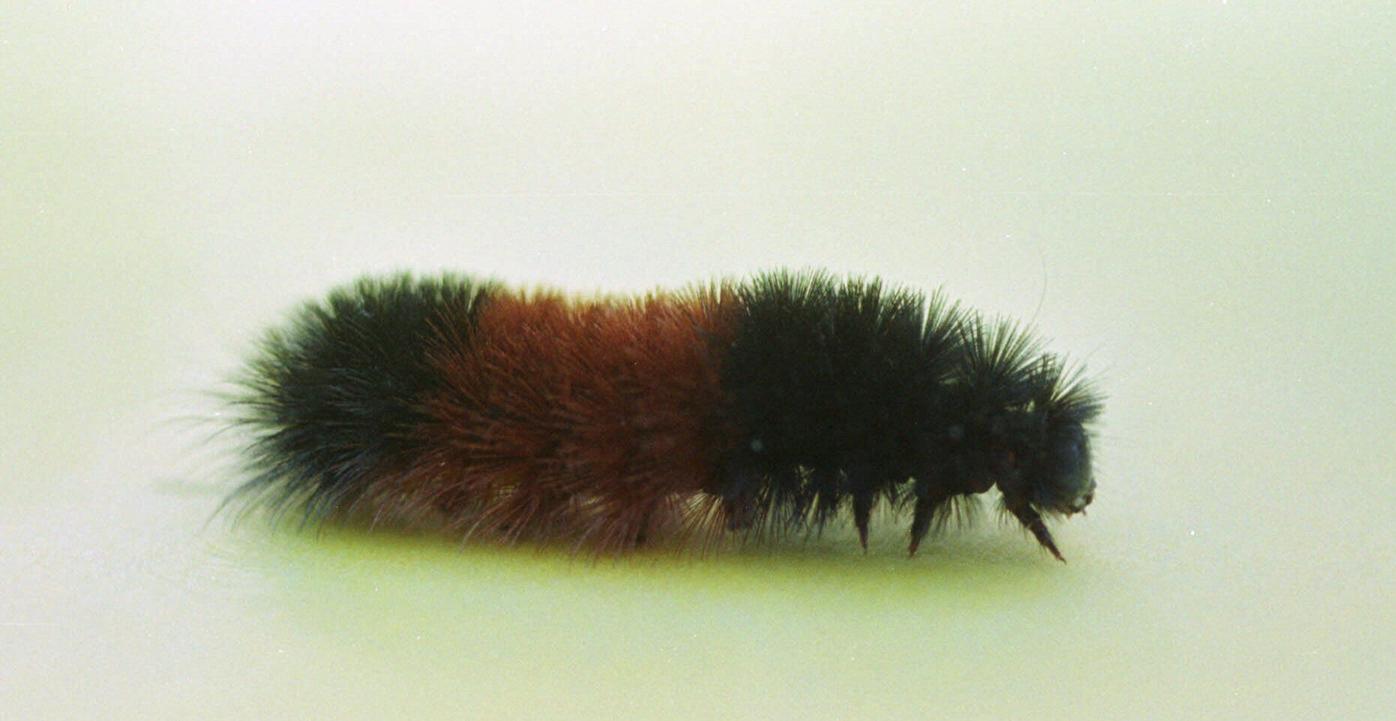 A Woolly Bear Caterpillar allegedly will help in a prediction of the severity of the upcoming winter.

A Woolly Bear Caterpillar allegedly will help in a prediction of the severity of the upcoming winter.

Not all insects die with the onset of cold winter; many spend the winter over in leaves, under bark, or elsewhere outside. The wooly bear caterpillar, or woolly worm, is the caterpillar we look to for a prediction about the coming winter. The story is the narrower the rust-brown stripe in the center of the body is, the harsher the winter will be. The wooly bears that I saw indicate a harsh winter coming. We will see.

While the wooly bear caterpillar is content wintering outside in some well-protected place — like under a pile of leaves, in a woodpile, beneath a shed, etc. — other insects prefer the comfort of our homes.

BOX ELDER BUGSThe box elder bug is the “star” home invader in many towns and cities in the Northeast (and elsewhere) this season, easily identified by the orange and red marks on a black body. They are about 1/2-inch long and have three stripes behind the head. This species is a true bug and, in some places, called a maple bug. They feed on low vegetation on the ground during early spring and summer. Around mid-July, they move to female box elder trees to feed on the seeds. In late summer, they leave trees and start searching for sites to spend the winter, often warm homes and other buildings.

They look for buildings with sunny exposure, and this is most likely where they are first seen, usually by the hundreds and, without exaggerating in some instances, by the thousands. They gather on the sunny side of your home. It appears that infestations are more common after a warm spring followed by a hot, dry summer. Even unheated buildings with siding may be invaded, as they find warmth beneath siding and in insulation, and with the coming spring, may lay eggs.

Once inside a home, the best way to remove them is by vacuuming them. This method will avoid crushing them, which almost always ruptures scent glands and rupturing the dye sacks that contain a defensive red enzyme that stains walls, drapes and woodwork. I learned this with a fly swatter some years ago.

STINK BUGSThese are another gift from Asia and are widespread in the United States. Regardless of the species, stinkbugs, as their name suggests, stink. Crush one outside and find out for yourself just how horrible their odor is. Like the box elder bugs, they enjoy the warmth of the sunny side of houses. They may never show themselves inside the home, though, content with being within walls. When large numbers invade homes, their normal activity may leave a foul odor and is challenging to eliminate.

LADYBUGSWhen hordes of ladybugs show up on the sunny side of your home and somehow find a way inside by the hundreds, they are not the “cute” little ladybugs of nursery rhymes that we might have played with as kids. They are the multi-colored Asian ladybug (a beetle) sometimes called the many named ladybird. Some call it the pumpkin ladybug, Halloween or harlequin ladybug (ladybird, ladybeetle) and it was introduced in 1978 and 1981, but never appeared to prove helpful and disappeared. Years later, in 1993, the first overwintering beetles were seen, and began proliferating in places like New England. And apparently, those we see today may not have come from those first introductions. Instead, they are thought to have been accidentally introduced in New Orleans from an Asian freighter.

I recall writing about many thousands of these pests showing up in sheds, garages, attics and even inside the home. I began finding them in our home tucked into warm places behind drapes by the dozens, thankful that there were not far more. Again, the vacuum was the easiest way to remove them.

One difference from our native lady bird beetles (a more proper common name) is these sometimes bite. It is difficult to describe them as they are multi-colored. When seen together some may have a couple black spots on a yellow background, while others may have as many as 10 spots (or even more) on orange or red backgrounds, or any combination. Like the name suggests, they are multi-colored. I have seen a few with only two spots.

The first time I saw Asian multi-colored ladybugs was at the summit of Mount Holyoke on the Summit House (elevation 942 feet) in Skinner State Park. There were thousands of ladybugs on the sun-warmed side of the house.

LETTERS FROM READERS Q: Reading your article of Oct. 4, you mentioned about voles having up to 17 litters per year. Yikes! Unfortunately, they have destroyed my flower garden — digging plants out by the roots and eating my flower bulbs (their favorite seems to be the cone flowers) and making all kind of tunnels throughout my garden, and in my lawn closest to the flowers.

How can I get rid of them? Do they live through the winter? I bought Molemax Mole and vole repellant and treated everything twice and watered it in per directions. Have you any suggestions?

A: Yes, these prolific little rodents live through the winter, or those that are not taken by weasels, owls, hawks, crows, housecats, bobcats, foxes, coyotes, skunks and, of course diligent home owners, as well as diseases.

I found that old-fashion wooden mouse traps work as well as anything. The traps — if your chemical treatments did not solve the problem — may help somewhat. I bait the traps with pieces of apple and place at tunnel entrances. Because the traps may also catch curious songbirds, and even pets, cover the traps. I have made tunnels out of sections of 4-by-4-inch planks. I have also fashioned tunnels out of 1-pound coffee cans (We save our empty cans) cutting an opening just large enough for the critters to enter on the top opening of the can and face it down so the curious vole or other small rodent enters to get the bait. I found this terrific for catching mice tunneling beneath our garden shed. For mice especially, peanut butter is an ideal bait, but be sure to place the trap in a “tunnel” lest a songbird is caught.

Q: Today (Nov. 15) while on my walk, I saw a group of black vultures huddled together near Wahconah Park. I thought they inhabited areas south of us. You would think this cold weather would bother them?

A: The black vulture, like the turkey vulture, has become more common throughout the year. In addition to vultures, the bald eagle has been seen in or flying over, that neighborhood.

“[I] had a flock of about 12 evening grosbeaks at my feeder and in the trees on Nov. 4. Stayed for an hour or so, then all flew off. Haven’t seen them since then.”

“I saw five evening grosbeaks at my feeder in Williamstown on Oct. 31. They devoured the sunflower seeds and then moved on, not to be seen again. What a delight to see them! I haven’t seen one for years. Pine siskins have been around since late October. Initially there were about a flock of 40 or so. I now see a handful on and off. Red breasted nuthatch has also been around the last few days. Looks like an irruptive year.”

NatureWatch readers share their ideas for winter bird baths and accounts of Evening Grosbeaks at feeders across the Berkshires.