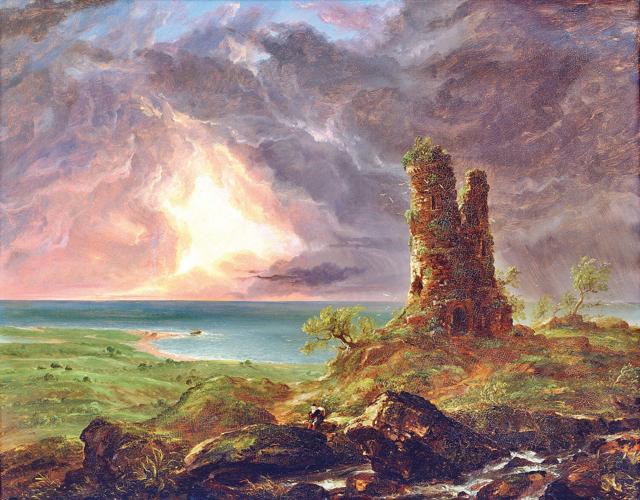 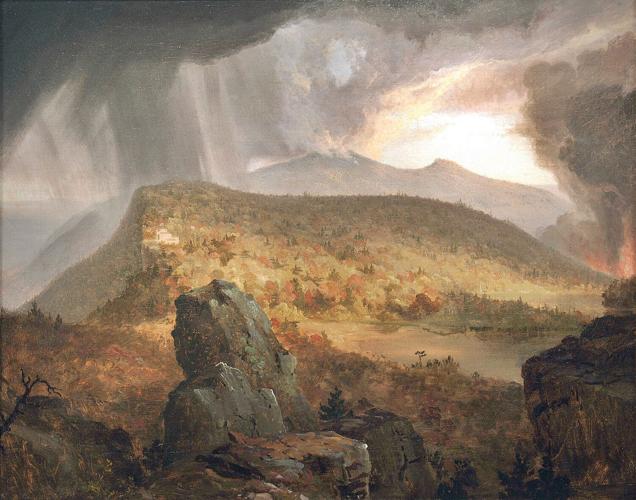 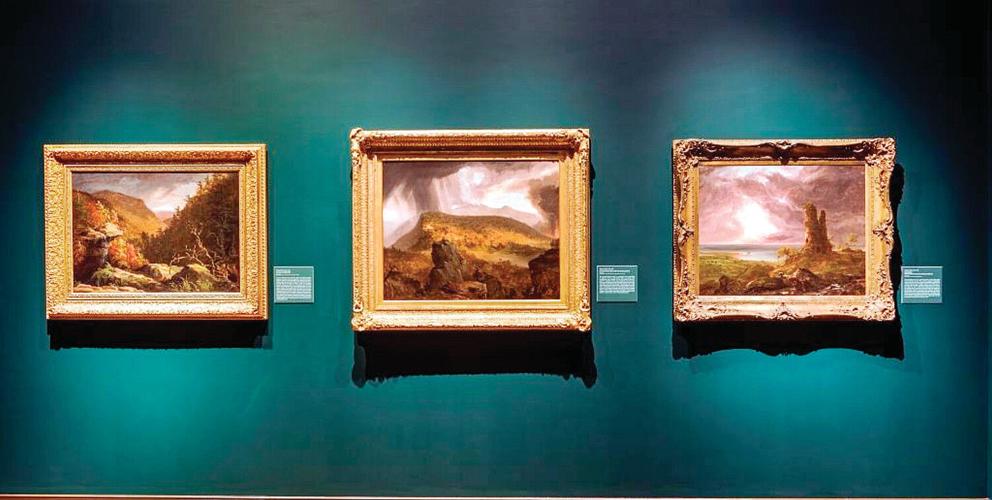 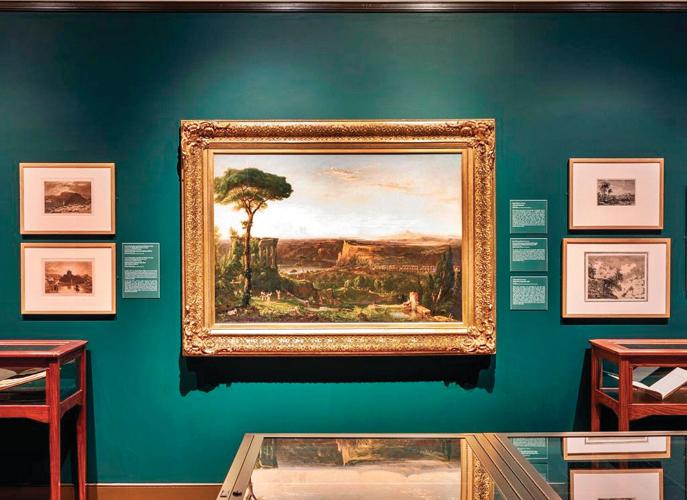 The exhibit will be on display at the Catskill, N.Y., historic site now through Nov. 4.

The exhibit will be on display at the Catskill, N.Y., historic site now through Nov. 4.

CATSKILL, N.Y. — Even as Thomas Cole painted American landscapes, his mind often inhabited terrain across the Atlantic Ocean. The England-born father of the Hudson River School artistic movement drew inspiration from artists across the pond, including J. M. W. Turner and John Constable.

These influences are the focus of "Picturesque and Sublime: Thomas Cole's Trans-Atlantic Inheritance," a new exhibit at the Thomas Cole National Historic Site that runs through Nov. 4. Its opening coincides with the final days of "Thomas Cole's Journey: Atlantic Crossings" at the Metropolitan Museum of Art, a show that will move to London's National Gallery after its May 13 New York City closing. Yale University's Paul Mellon Professor of the History of Art Tim Barringer appreciated the opportunity to address ideas in Catskill that he couldn't in New York City.

"It's a really significant exhibition," Barringer, a co-curator with Gillian Forrester, Jennifer Raab, Sophie Lynford and Nicholas Robbins, told The Eagle by phone, "because what we tried to do for the Thomas Cole site show was to explore what might have been in Thomas Cole's mind when he crossed the Atlantic in 1818 as a 17-year-old, what he knew of art and art history. He had worked in an engraver's shop in Liverpool in England for one year; that's probably where he would've seen prints, engravings, all of these different kinds of works on paper that we have in the show."

The Yale Center for British Art lent nearly all of the works on display at the site's New Studio. The curators — two professors, two graduate students and a curator from Yale — organized the room around the themes of the "picturesque" and the "sublime." To the right upon entering, visitors encounter a couple walls of the picturesque. The pieces "are intimate, small-scale works in which landscape is a place of pleasure and delight," Barringer said.

The picturesque can be traced to Claude Lorrain, a 17th-century French painter whose "View of a Portico by the Side of a River, with Herdsmen and Cattle" (1774) appears in the show as a print by Richard Earlom. But perhaps the best example of the picturesque in the exhibit can be found a few paces away in Edward Dayes' watercolor, "Haweswater, Westmoreland" (1795).

"It's a very carefully framed picture," Barringer said. "You have a very strong sense of the foreground, the middle ground, which is the water in this case, and then the background, which is the mountains. You have wonderful, lively clouds [overhead]. And you have picturesque figures in the foreground. There's a figure of a man fishing and a milkmaid, so it's a natural scene, but it's a very, very comforting one. It looks as if you could enjoy this place if you were out on a hike or on your picturesque tour, your vacation up in the lake district."

The sublime is across the room.

"It's about danger," Barringer said of the concept.

Arugably no work epitomizes this notion more than J. M. W. Turner's "Devil's Bridge, Saint Gotthard's Pass" (1804). This alpine watercolor stems from a trip Turner made to Switzerland in 1802, according to Barringer. It depicts a waterfall and snow-covered peaks, among other natural features.

"We all know what landscape is because we have two settings on our printer, right, landscape and portrait," Barringer said, "so you expect landscape to be horizontal. But this is a thin, tall, vertical composition, which gives you a sense of, first of all, that you could plunge to your death over this waterfall. But also, when you look up and up and up and up, you see the peaks of the Alps thousands and thousands of feet above you. So, he uses the format to enhance the drama, and of course, that's exactly what the sublime is about: the drama, the danger, the excitement, the sort of shiver that goes down your spine when you imagine yourself being smashed on the rocks."

Elizabeth B. Jacks, the site's executive director, was grateful that the Yale Center for British Art would be willing to share a fragile watercolor.

"It's amazing that they would lend it," Jacks said on Tuesday at the site's offices.

She was also excited that the site is exhibiting "Catskill Mountain House, The Four Elements" (1843-44), one of three oil-on-canvas Cole paintings on the far center wall joining the sublime and the picturesque. The work, which highlights the Catskill Mountain House hotel overlooking the Hudson Valley, hasn't been shown publicly in a couple of decades. Barringer may have been even more enthusiastic than Jacks.

"As far as we know, the last time it was exhibited was 1994," he said. "And it's in a private collection, so we were very grateful to the owner for lending to the Thomas Cole Historic Site. This painting is a very, very powerful [example] of the sublime."

Earth, water, air and fire are all depicted; the fire on one side long perplexed Barringer.

"It's always seemed strange to me that there's this really big bush fire burning in one corner of the picture. It seemed a little unlikely in the Catskills, but my colleague and co-curator Jennifer Raab actually found references to the fact that the tanning industry in Catskill used the bark of the hemlock tree. They had to remove the bark to get to the tannins, which are inside the bark of the tree. They just left piles of bark," he said, noting that these would then catch on fire.

Cole didn't appreciate human encroachment on nature. The mountain house was no exception.

"He hated that hotel because he thought that people were coming there and drinking and dancing and flirting and anything but loving nature. So, on both sides of the picture, he's got examples of the things that man does wrong, but then above it, he's got this incredible vortex of cloud," he said.

Works by Turner and Constable undoubtedly influenced that portrayal of the sky.

"You can't really understand American art of this period unless you understand the British roots of it. On the other hand, the American art looks completely different. It's radically different," said Barringer, who will speak on Sunday, May 13, at nearby Temple Israel (220 Spring St.) in Catskill.

Jacks might argue that you can't fully understand the history of American landscape without a visit to the Catskill museum. Tours of Cole's old home are available six days per week, as well as other programming.

"I think that what you get when you come here is an immersion in American landscape painting," she said. "This is the place where the Hudson River School began, and it's in the middle of the landscapes that inspired it. And directly across the river is the home [Olana State Historic Site] of Thomas Cole's student, Frederic Church, who carried the Hudson River School forward, so you have the whole story."