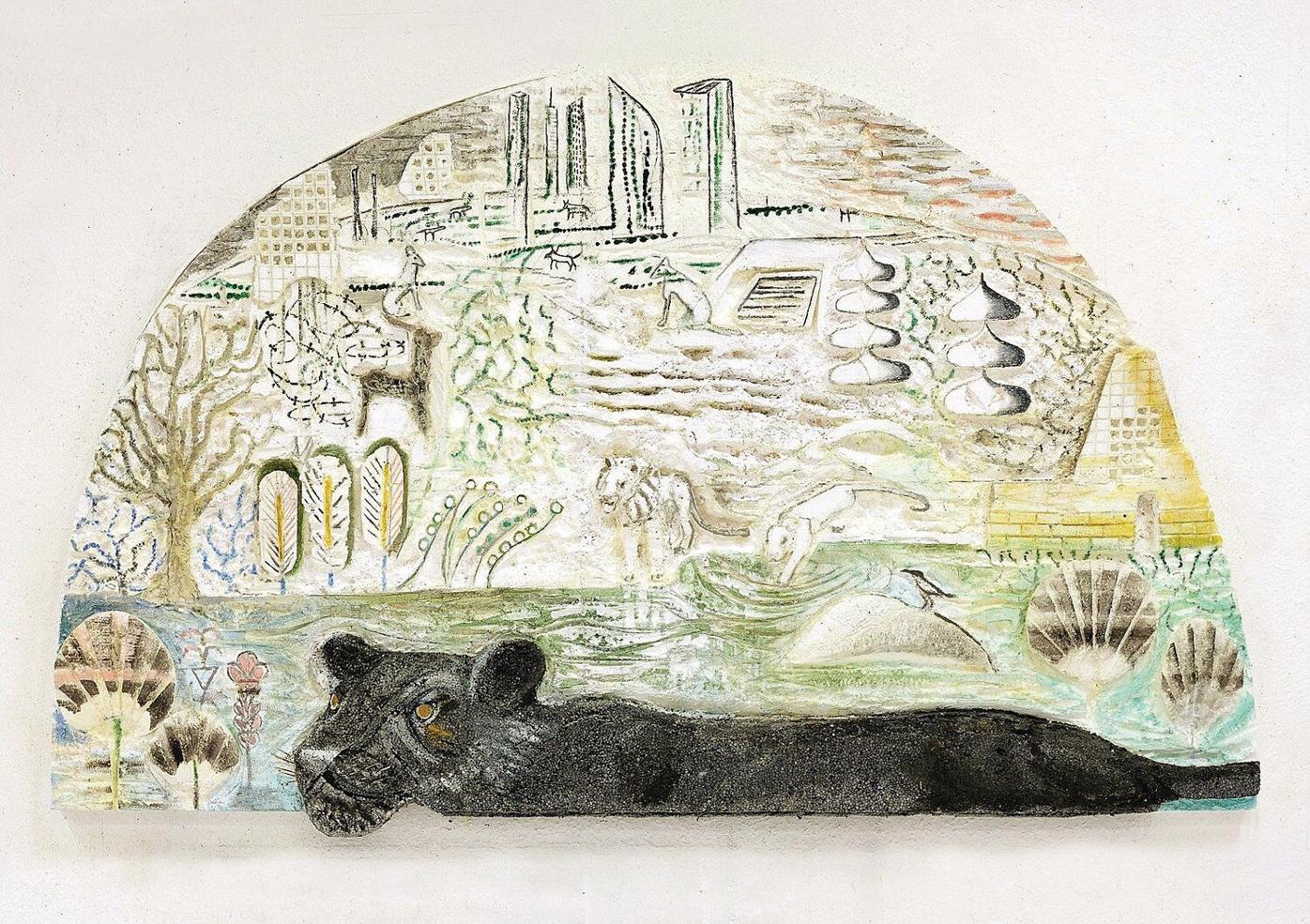 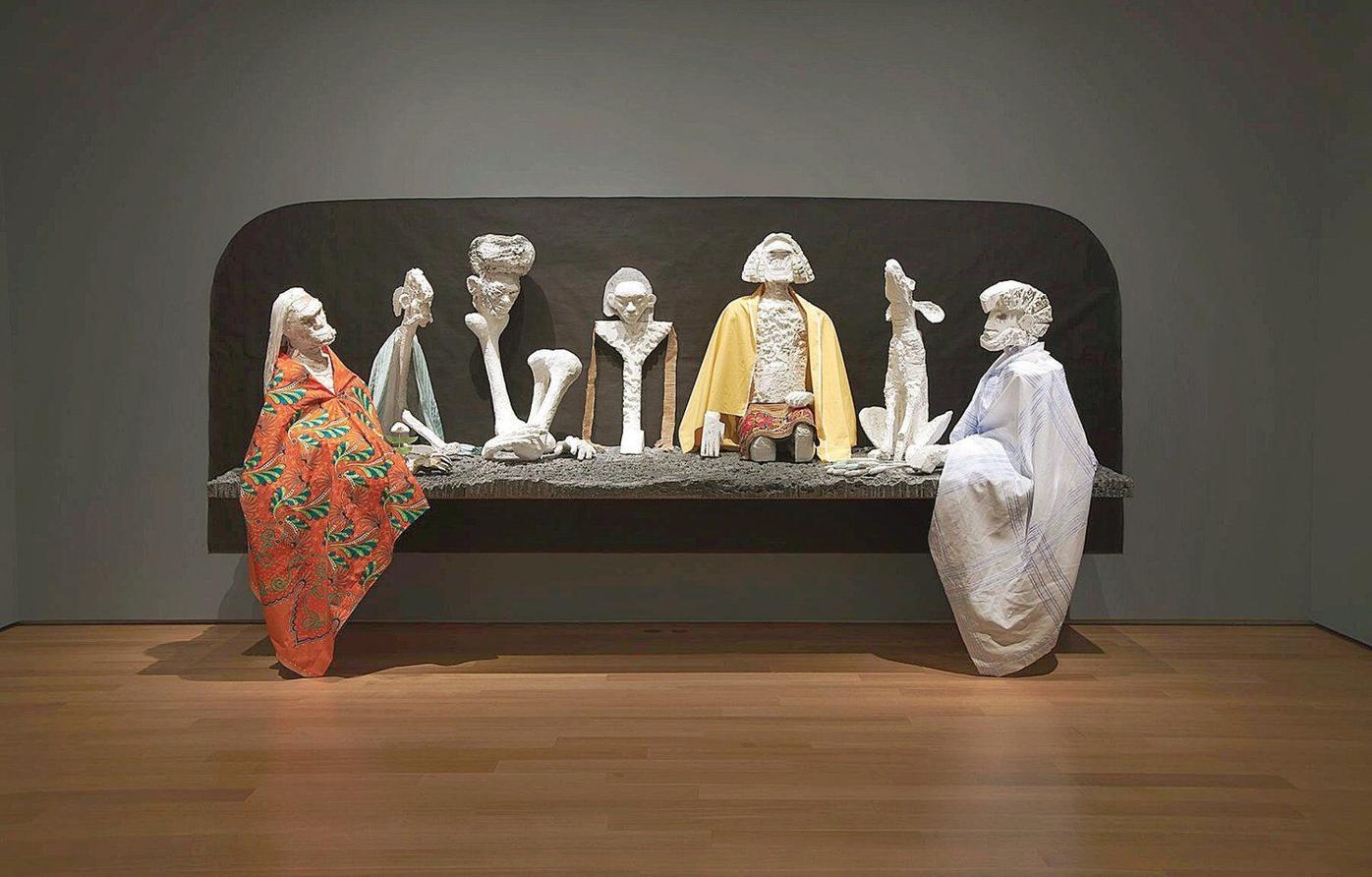 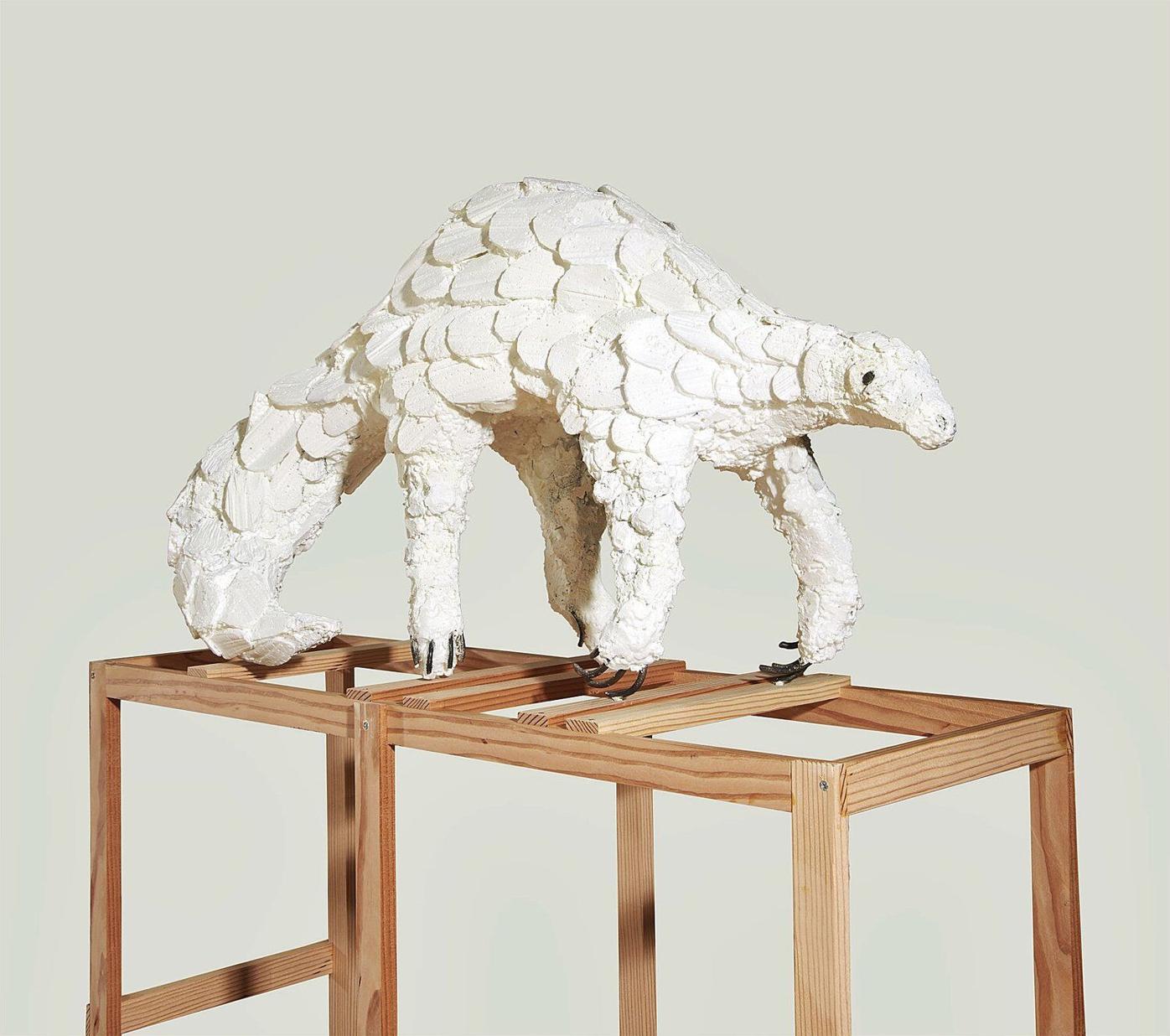 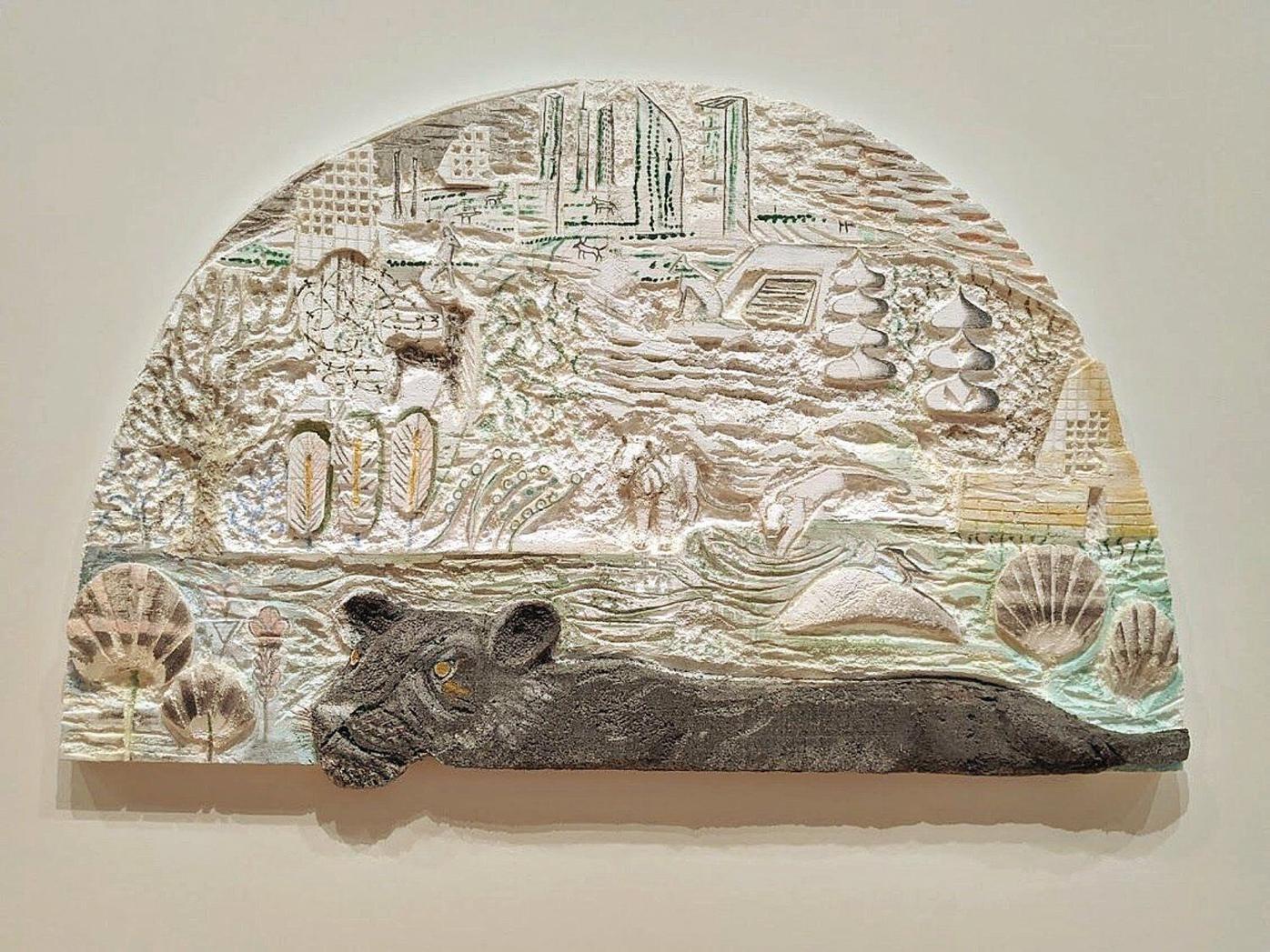 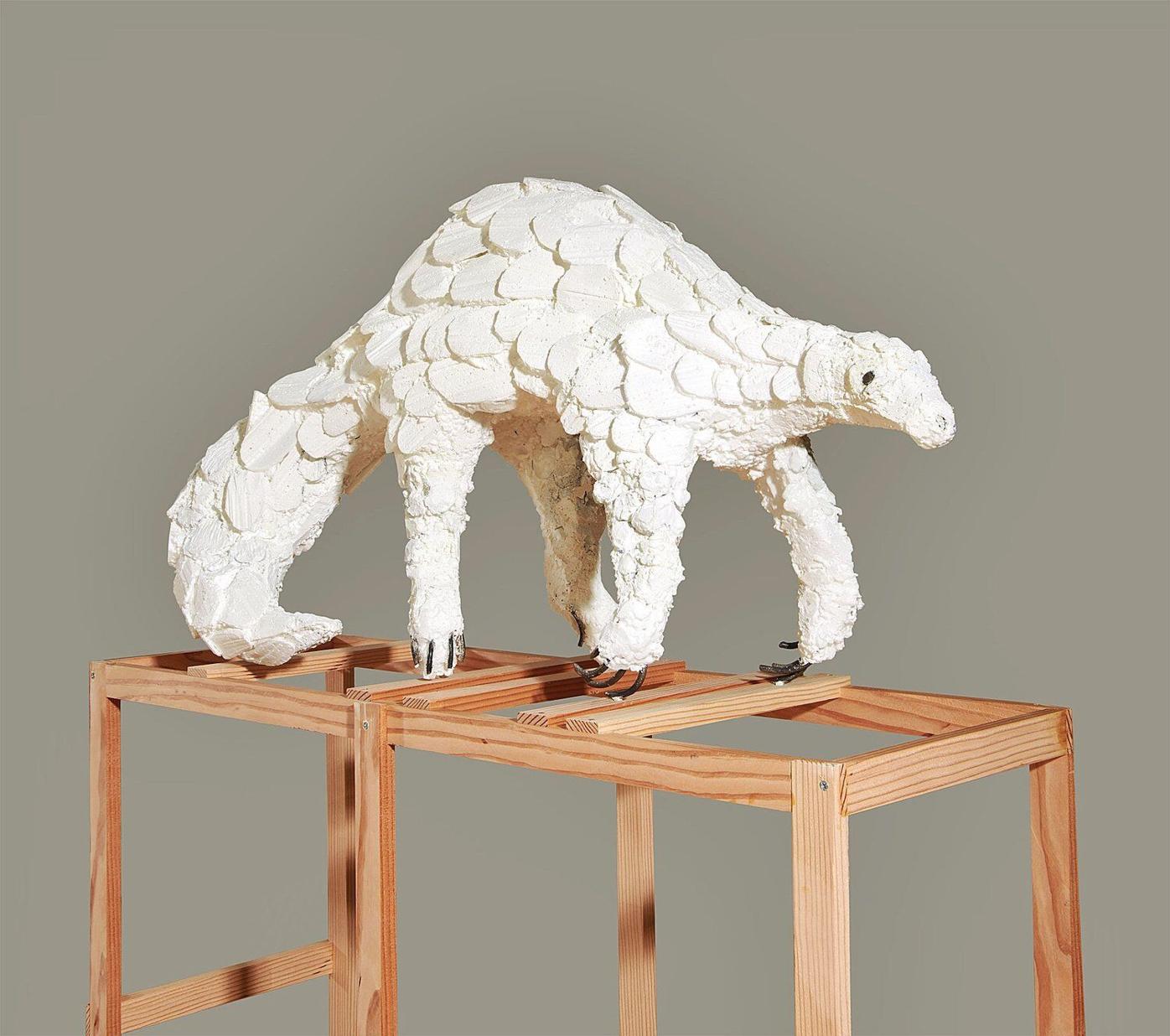 WILLIAMSTOWN — A black panther rises from a river; a lioness, at its edge, dips a toe into the water as a lion stands guard. Behind them, myriad animals roam a hillside that leads, in the distance, to the ruins of a city, where only broken skyscrapers remain.

The panther gazes into the distance, beyond the viewer, who is of no importance; of no consequence, anymore. Is this a dystopian view of the future, or a non-human animal utopia?

"Animals will return to the vacuum left by humans," we are told by artist Lin May Saeed, in the minimalist text accompanying "Panther Relief."

In this wall relief, as in all of her work, animals — non-human animals as she refers to them — are always front and center. Saeed's work, seen in her first solo museum exhibit, "Lin May Saeed: Arrival of the Animals," on view at The Clark Art Institute's Lunder Center through Oct. 25, centers around the lives of animals and human-animal relations.

"She is a storyteller who takes narratives from mythology, from theology, from different stories and she thinks about what would happen if humans weren't at the center of every single narrative and if we weren't so anthropocentric," said Robert Wiesenberger, associate curator of contemporary projects at The Clark. "As she tells these stories, you'll see subjects about animal subjugation and oppression; animal liberation; cohabitation with humans as a kind of utopian possibility for the future. All of that is done, I think, with a lightness of touch and even a sense of humor. I think in all of those ways, she's a really distinctive artist. I don't know of any other artist today who focuses on animals with this particular commitment to them."

The materials Saeed uses to create those stories are as distinct as the subjects of her artwork. The Berlin-based artist of German-Jewish and Iraqi descent, prefers to sculpt with a readily available material: polystyrene foam, better known as Styrofoam. The non-biodegradable plastic, easily salvaged by the artist, not only lends itself to carving, but is for the artist, a reminder of the impact of humans on the environment.

"She's very aware that its very environmentally disastrous. She's interested in transforming it. She is interested in it for several reasons," Wiesenberger said. "It's easy to get. It's cheap. It's much easier to sculpt than stone. For her, the history of sculpture is such a man's world, very masochistic. It's about who has the strength to make huge sculptures of heavy materials; who has the funds to have a studio and to have assistants. The fact that she can do all of this on her own is very important to her; very empowering.

"On the other hand, the history of animal welfare and animal rights is overwhelmingly a women's world. For Lin May Saeed, it is maybe one explanation of why the history of art and the history of animals have rarely overlapped and when they do, its very unfavorable to the animals. So for her, she's trying to create a new iconography of interspecies solidarity. We are all animals; our fate is intertwined."

The unfavorable intersection of art and animal histories begins Saeed's career-spanning show, in a cave-like entry way filled with art of past artists — woodcuts by Niccolo Boldrini and Albrecht Durer and studies and drawings by Felix Bracquemond, Theodore Chasseriau and Michael Snyders — that use animals as window-dressings, secondary subjects and food. Only two drawings, one by Eugene Delacroix and Rosa Bonheur, both 19th-century French artists, feature their animal subjects, a tiger and a lioness, predominantly in their images.

The retrospective begins in the next gallery, introducing Saeed to the audience with some of her more easily accessible works — steel gates that depict parables and other tales. Here, she, like many artists before her, tells the tale of St. Jerome and the lion. But, unlike those before her, in Saeed's "St. Jerome and the Lion," the man does not dominate the space or command the viewer's attention. The lion is not subjugating itself, as in Durer's "Saint Jerome in His Cell" in the previous gallery, but an equal in placement, height and prominence.

In another gate, "Toreador," Saeed flips the traditional narrative of the bullfighter and bull. Here, her gate shows the bull triumph over its would-be assassin. And yet, the story changes again, in "The Liberation of Animals from their Cages XXIII/Djamil Gate," in which a masked human is breaking the bonds of a camel.

The gallery moves on to her Styrofoam reliefs and sculptures, where in the center of the room two sculptures, "Calf" and "Pangolin" stand upon their shipping crates, as if celebrating their liberation. "Pangolin," newly created for the exhibit, is Saeed's latest commentary on the treatment of animals.

The pangolin — the only mammal completely covered in scales and often called "the world's most-trafficked animal in the world you've never heard of" — accounts for at least 20 percent of the illegally trafficked animals in the world. Although the sale of pangolins is illegal, the mammal is still highly sought out for its scales, which are used in Chinese medicine, and for its meat, which is considered a delicacy.

"It's also believed to be one of the original hosts of the coronavirus," Wiesenberger said, referring to studies that suggest COVID-19 likely emerged from recombination of viral genes in bat and pangolin coronaviruses that resulted in the evolution of SARS-CoV-2 and its jump to humans.

Both liberated non-human animals gaze awestruck upon the brightly-colored "Hawr al-Hammar/Hammar Marshes," a bio-diverse marshland utopia in which reed islands float by water buffalo. The real marshes exist in southeastern Iraq, part of the Mesopotamian Marshes, which are thought to be the basis for Eden. The marshes have seen their share of human intervention. Drained by Saddam Hussein, they were restored in 2003, but by 2015 had seen their waters recede again, prompting a shift from farming and fish to a tourism economy.

In the next gallery, Saeed's work envisions an uprising of non-human animals in her drawing "War," and examines the consequences of human dominance with "Cleaner," a humanoid figure in hazmat-like clothing, holding an animal covered in oil.

The show ends in another cave-like atmosphere, this time, with Saeed's interpretation "Seven Sleepers," a Christian and Islamic parable in which seven men escape religious persecution in a cave. They break bread and fall asleep for 300 years, reawakening in a time when their faith is the major religion and they are persecuted no more. In some versions of the story, the seven are accompanied by a dog in the cave or guarded by a dog.

Saeed, in her sculpture "Seven Sleepers," makes the dog one of the seven, moving past the idea that all seven sleepers were humans.

"Once you start scratching on this topic of animals and animality, you quickly get to almost every issue we're grappling with today, whether its environmental, human rights, or the pandemic we're experiencing. It's all there but it's in stories that are accessible to people and relatable. A lot of us love animals, but it's hard for us to square our love of specific animals with the way we treat non-human animals as a whole. It's just really tough to explain. But, in this utopian world [created by Saeed], we move beyond that. It might seem like a crazy world, but it might be the only answer we have."