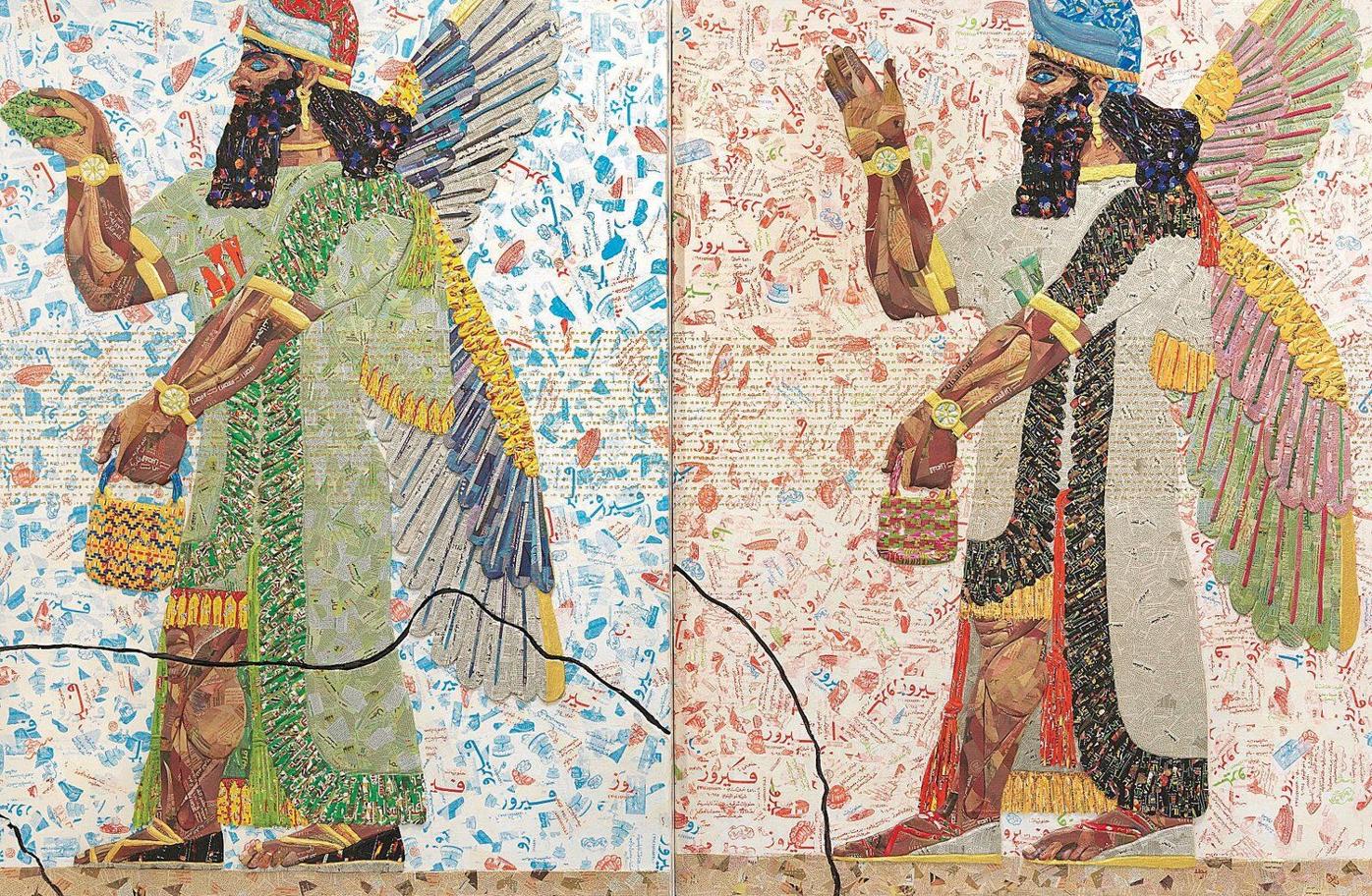 "The invisible enemy should not exist (Room Z, Northwest Palace of Nimrud)" engages with Williams College's complicated history of collecting, including a Williams College alumnus' acquisition of the two Assyrian reliefs now in the museum's collection, 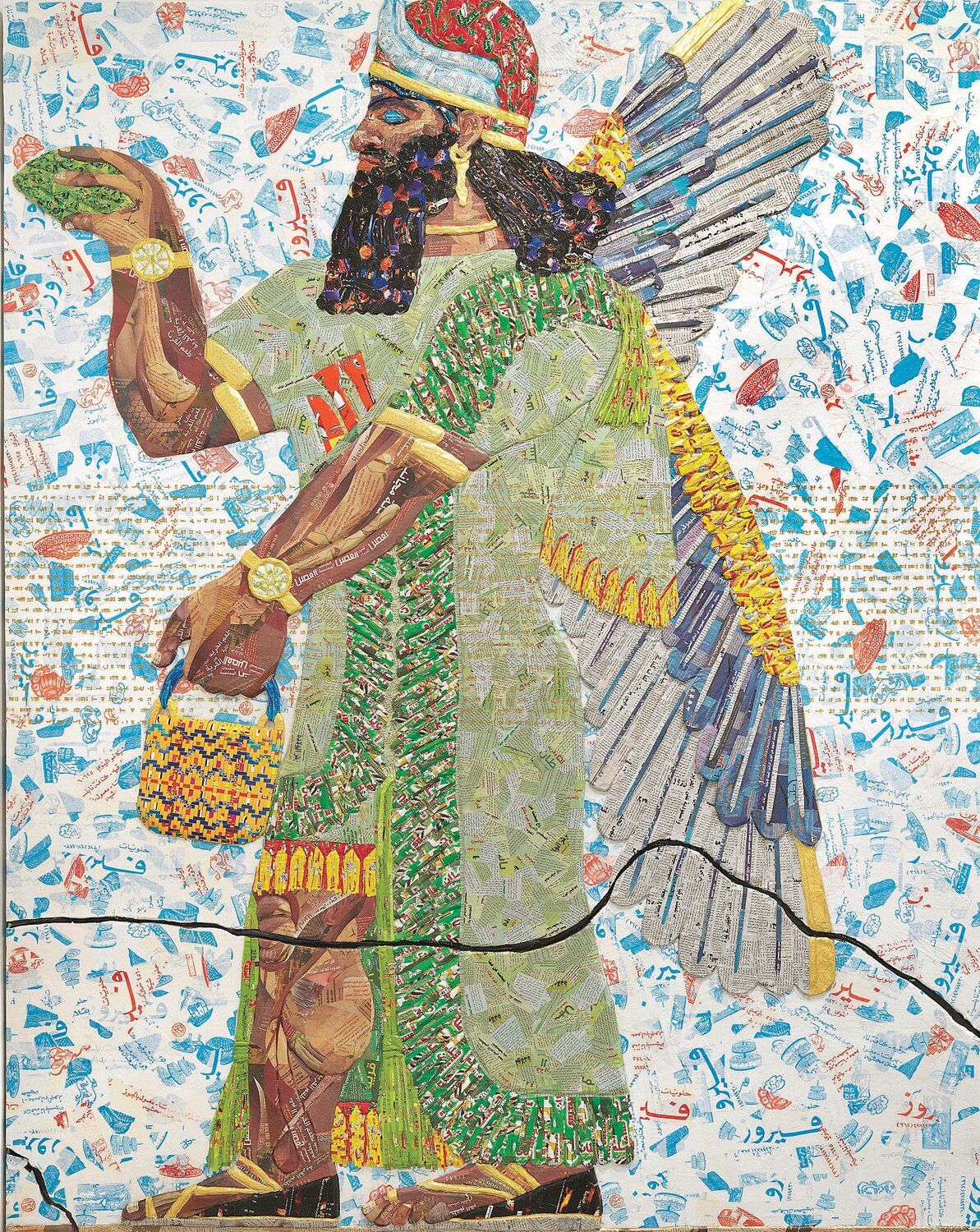 "The invisible enemy should not exist (Room Z, Northwest Palace of Nimrud)" engages with Williams College's complicated history of collecting, including a Williams College alumnus' acquisition of the two Assyrian reliefs now in the museum's collection,

WILLIAMSTOWN — He stands more than 8 feet tall and broad shouldered. He is standing foursquare and lifting his left hand, and the muscle shows in his forearms. He wears a long beard and a gold earring, and arm bands under his tunic, and his hair falls over his shoulder. His horns are golden, and his wings are sky blue. He is a lamassu, a guardian spirit from the palace of Nimrud, in modern-day Iraq.

And at the Williams College Museum of Art, he is a bright mosaic made out of everyday things — newspapers in Arabic and wrappers from packaged northern Iraqi foods that families in the U.S. can buy at a corner market in Brooklyn, N.Y., or Chicago and bring home for dinner.

He is made in the image of a 3,000-year-old sculpture. And the sculpture is gone.

Internationally acclaimed artist Michael Rakowitz has reimagined Room Z of King Ashurnasirpal II's 9th-century palace in the Assyrian city on the Tigris river. It was built circa 1350 B.C.

Archaeologists from Britain and other Western countries have excavated and removed artwork since 1854, including the two Assyrian reliefs — acquired and gifted by a Williams alumnus — on display at WCMA. And in 2015, Islamic State fighters destroyed much of what was left.

"They dismantled the winged bulls, known as lamassu, as purposefully as any decapitation they carried out in Mosul or the Syrian city of Raqqu then they wired the entire palace with explosives and blew it apart," Associated Press journalist Lori Hinnert wrote while covering the destruction in early January 2017. Rakowitz has placed her voice alongside the first guardian.

He has shown work around the world, from the Museum of Modern Art to The Tate to the Istanbul Biennial, and he will come to Williams College on Thursday to talk about his work, "The invisible enemy should not exist (Room Z, Northwest Palace of Nimrud)."

The name is a translation of Aj-ibur-shapu, the avenue from the Ishtar Gate in the inner city on Babylon, he during a phone interview from Chicago.

For him the phrase offered layers of meaning. He thought of the ways a country can create the idea of an enemy, the way the U.S. decided to go to war against Iraq because of weapons that never materialized.

Since 2007, he has created a series of works recalling the 15,000 artifacts stolen from the National Museum of Iraq in Baghdad, during and in the days following the 2003 U.S.-led invasion. (Only a third of the artifacts have been recovered.)

With each work he creates, he thinks of people who are gone and lives that cannot be reconstructed.

The people who lived alongside these artifacts were descended from the Assyrians, he said. Many were Assyrian Christians. The exhibit offers the voices of people who lived near the site, or worked there. They could tell stories of the great hall, the library and the wells, the temples of Nabu and the goddess Ishtar.

They knew it familiarly.

Seeing its destruction, writes Amer Al-Jumailey, who taught archaeology at Mosul University, was like seeing one of his sons dead.

As Rakowitz creates new forms from the vanished walls, he wishes he knew the names of the artisans who made them.

They carved guardians out of gypsum to protect and bless the kingdom. Each one carries a woven bag or basket in one hand, and many are holding a green tapered cone in the other. In his research, Rakowitz said, he found a new theory on what they are holding: date pollen and an infant date sapling.

Dates are gendered male and female, he said, and pollen from a male tree fertilizes a female tree. Today farmers still fertilize by hand. They shake pollen onto the fronds of female trees so they will bear fruit.

Dates take him back to the moment this work began. It was 2004. Rakowitz grew up in Great Neck, N.Y., and he was living in Brooklyn then. He walked up Atlantic Avenue to the Sahadi Importing Co. His grandparents had come here, he said. They came from Iraq to New York in the 1940s, and they could come here for spices and flavors to conjure Iraq in their new home.

That morning he saw a large red can of date syrup marked from Lebanon. His mother had told him the kind in the stores was nothing like the syrup her grandfather had made by hand. It was too filtered, too light, like honey.

"When I brought it to the counter," he said, "the owner told me `your mother will love this. It's from Baghdad.'"

The syrup was processed in Iraq, he learned, then shipped into Syria and then into Lebanon. Until 2003, that trip had circumvented U.S. sanctions. The sanctions had been lifted, but prohibitive security charges remained.

"More than 600 varieties of dates grow in Iraq," he said. "They are considered the best in the world."

In the 1970s, dates were the country's second largest export, next to oil. The country had 30 million trees. Now it has 3 million.

"It's a literal desecration of the land," he said. "The trees met the same fate as the people."

He reopened his grandfather's import-export company, he said, as an artistic venture as much as an entrepreneurial one. He tried to import dates from Iraq into Brooklyn. The dates never reached him, he said, but he brought in cookies and other foods like the date syrup. Looking around his store, he thought of the empty museum in Baghdad, and he imagined artifacts coming back as ghosts, wearing the skin of other objects that could not say where they had come from.

At WCMA, his tall figures lead into the gallery where the two stone Assyrian reliefs now hang. A film is playing here on a loop. A U.S. veteran of the Iraq War narrates a soldier's memory of seeing people broken and bleeding, men, women and children. On the screen, "Special Ops Cody" — a military action figure that Iraqi insurgents used in place of a real American soldier when making demands in 2005 — is looking up at stone sculptures in a museum. They too are broken, missing eyes.

Rakowitz respects WCMA's willingness to bring this conversation — about where and to whom objects of cultural heritage belong — into the museum, he said. A few feet away from the stone guardians at the college, Cody calls to the the sculptures above him — "don't you all want to go home?"