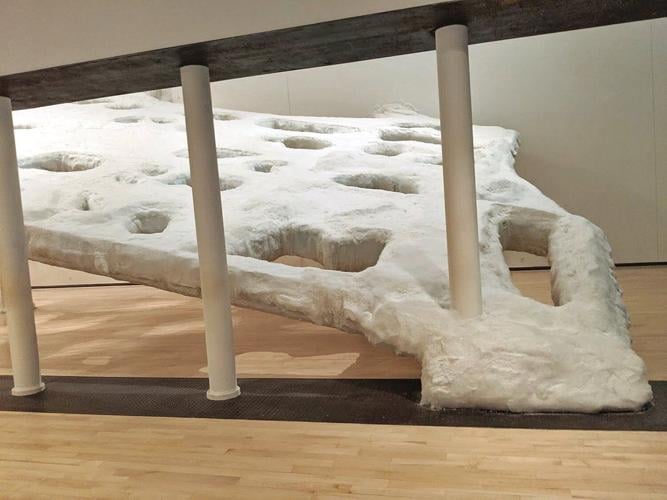 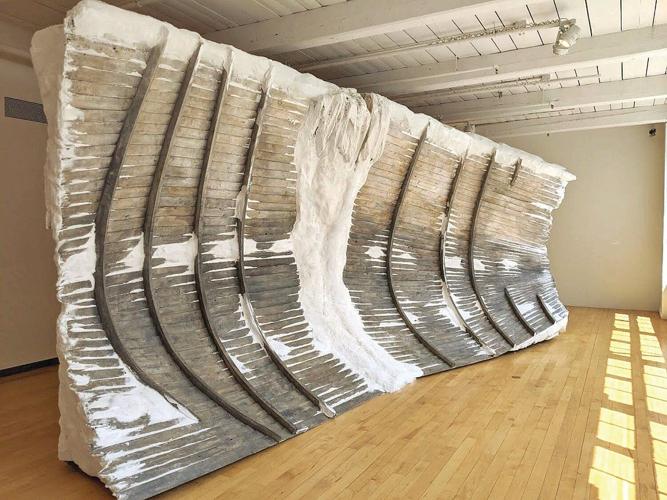 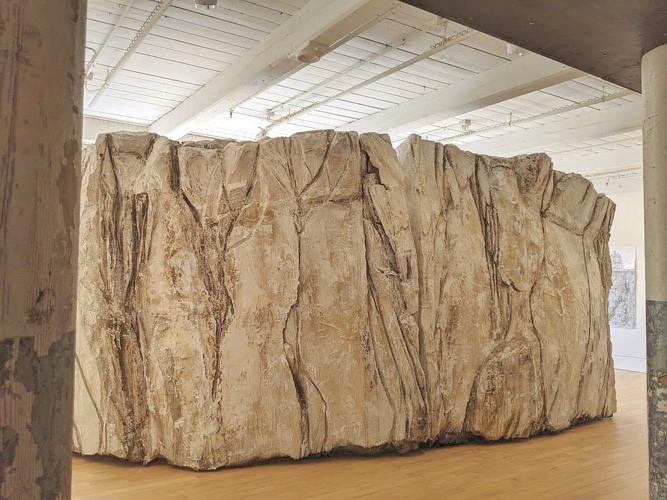 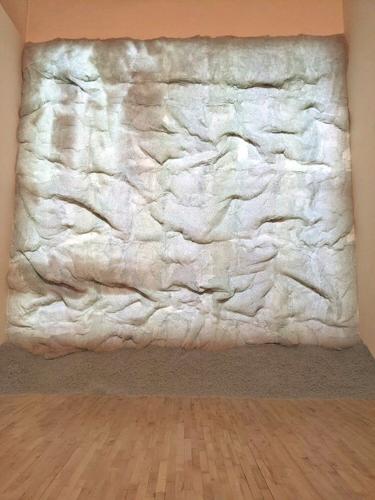 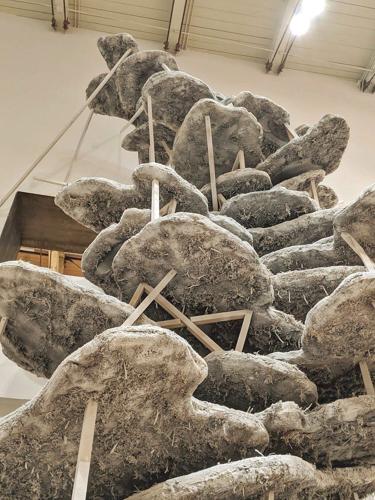 Collapsing Pillar 2020, slabs of stacked "permafrost," represent the fragility of the Arctic environment. 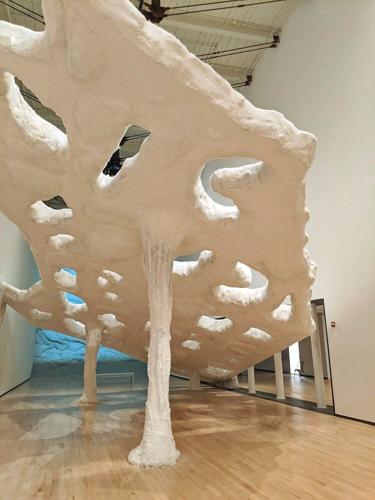 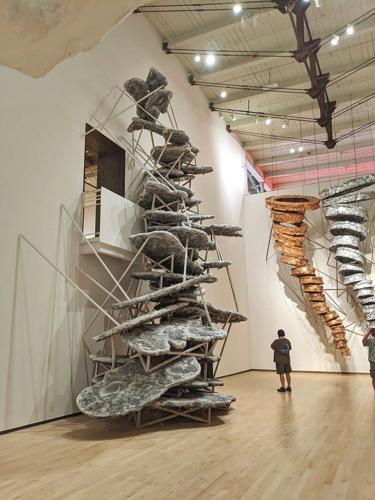 A Mass MoCA patron views Collapsing Pillar, 2020, part of the exhibit, "Blane De St. Croix: How To Move A Landscape." 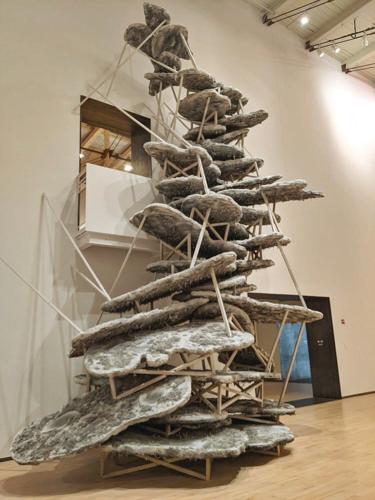 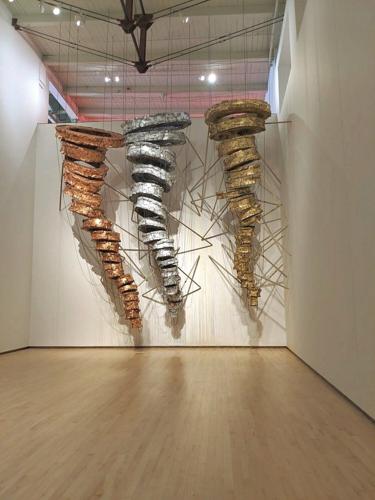 A Mass MoCA patron views Collapsing Pillar, 2020, part of the exhibit, "Blane De St. Croix: How To Move A Landscape."

Remember when Greta Thunberg was a household name?

When your social media feeds were filled with posts about plastic bag bans and being forced to use paper straws? Or, were filled with instructional videos on how to knit "koala mittens" and "joey pouches" for animals injured in the Australian bushfires?

Was that really just six months ago? Really, it was.

And it's still happening, as Blane De St. Croix's "How To Move A Landscape" reminds us. Here, monolithic sculptures of thawing Arctic permafrost melt across galleries, a tower of icy tundra cascades from floor to ceiling and miniaturized views of eroding coastlines sit in or atop open crates, as if ready to be unpacked.

The exhibit, on view through Sept. 6, 2021 at the Massachusetts Museum of Contemporary Art, was originally scheduled to open at the beginning of April. Then the novel coronavirus pandemic reached the United States. Museums, like so many other businesses, were shut down in March — in an effort to stem the spread of the virus — as our attention turned to more pressing matters.

When Mass MoCA reopened on July 11, it did so with the shows that it had planned to debut this spring — "Kissing Through A Curtain" and "How To Move A Landscape." Only now, the wall text of those shows includes an apologetic explanation stating the shows were conceived and put together prior to the pandemic and the murder of George Floyd.

So much has happened in just six months.

And now, as we move forward toward a "return to normalcy," there's an unsettling familiarity that permeates De St. Croix's solo exhibition.

The never-ending battle between humans and nature is clearly seen in De St. Croix's works, testaments to the impact climate change is having in the Arctic, both figuratively and literally. Much is based on his own travels and research, a struggle the artist has witnessed with his own eyes.

Such is the case with Hollow Ground, 2020, one of four new pieces commissioned by Mass MoCA, that evokes the thawing permafrost he saw during a trip to Utqiagvik, Alaska, in 2019. From above, the icy plane that cuts through parts of the museum's three-story gallery is a pockmarked plane, filled with gaping holes made by the release of methane gas pockets or from collapsing soil. From below, the holes, seen from what appears to be an icy cavern, act as windows peeking in on the transforming world above.

Nearby, Collapsing Pillar, 2020, a towering pile of icy tundra slabs teeters as it leans against the gallery wall, appearing as if its clumsy supports could give way at any time. While fully secured and anchored to the wall, the piece vibrates with a fragility that is found in the Arctic landscape. There, landscapes once dotted with patches of berry bushes and vegetation have been swallowed whole by sinkholes caused by thawing permafrost, or run dry by lakes and swamps drained by newly thawed lands.

The struggle between nature and humans is never more present than in Dead Ice, 2014, an immense recreation of a "living glacier," that splits its gallery in two. On one side, the remnants of a hull of a ship is embedded in the ice. On the other, the representation of "dead ice" as it cracks and splits in the water, waiting to thaw and become part of the bigger ocean. But who has won this battle? On one hand, the ship's hull is evidence of a failed exploration, reclaimed by nature. But at the same time, this chunk of glacier is melting in the ocean, a victim of human-made climate change.

In the same galley, a miniature train, Moving Landscape, 2020, winds its way through the wall, carrying its precious cargo in a never-ending circle. On its cars are parts of tundra, wetlands, forests and deserts — landscapes that are always on the move and changing.

The exhibit is full of miniaturized items, but perhaps, it's most impressive and most out of context in the show, is Broken Landscape IV, 2009. Atop the 4-foot high wall, that very divisively cuts a corridor in two, is a replica of a section of the border fence between the U.S. and Mexico. De St. Croix traveled the entire length of the fence for his research, documenting the different landscapes it crosses, along with people on both sides of the border communities.

But the most majestic pieces in the show bookend the museum's three-story gallery. Cold Front, 2020, crafted from the plastic chips of 67,000 recycled water bottles, recycled foam, cotton and eco-resin, shimmers on one end. On this faux glacier's glimmering white surface, which stretches upward, footage of a real, moving glacier is projected and watched.

At the other end of the gallery, the gold, silver and copper tornadoes of Alchemist Triptych, 2020, swirl above tiny holes in the floor. The spirals, meant to represent minerals mined from the earth, dangle in the balance. Could these twisters collapse? Swirl away, leaving a path of destruction in their wake? Or slowly dissipate, leaving only a small trace, the tiny holes below as the only evidence of their existence?

And what if we apply those questions to nature and humanity, which struggle to coexist? We now know, thanks to the pandemic, that in the absence of humans, nature would begin to heal itself — a lesson to take with us as we rush back to a place of normalcy, which De St. Croix reminds us not only includes social gatherings, outings and shopping trips but also melting permafrost and rising sea levels.

At the center of artist Wendy Red Star's work is a social commentary, focused on bringing attention to the history and culture of Native Americans, especially that of the Apsàalooke tribe. Her work is the focus of a new exhibit at Kidspace at Mass MoCA.

Lost ... and found, in translation

NORTH ADAMS — Up close, it's evident that the brightly colored paintings of Justin Favela's series, "After Jose Maria Velasco," are not made with oils like those that inspired them, but …

'It's amazing': Sculptor Kim Faler reflects on recent national attention for her work

Large-scale wads of chewing gum, painted in bright hues and sculpted from iron, brass, gypsum and wax hang at eye-level in a second floor gall…