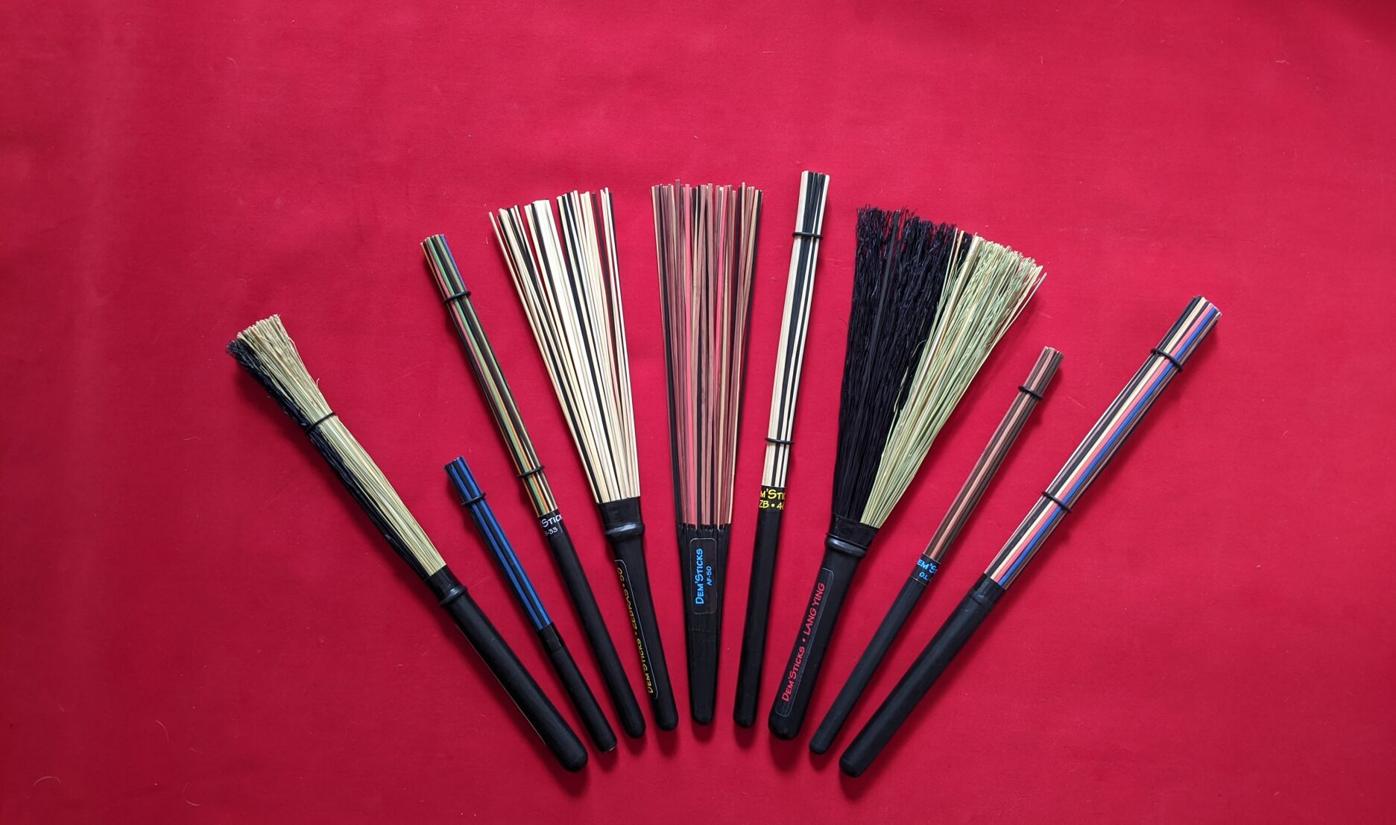 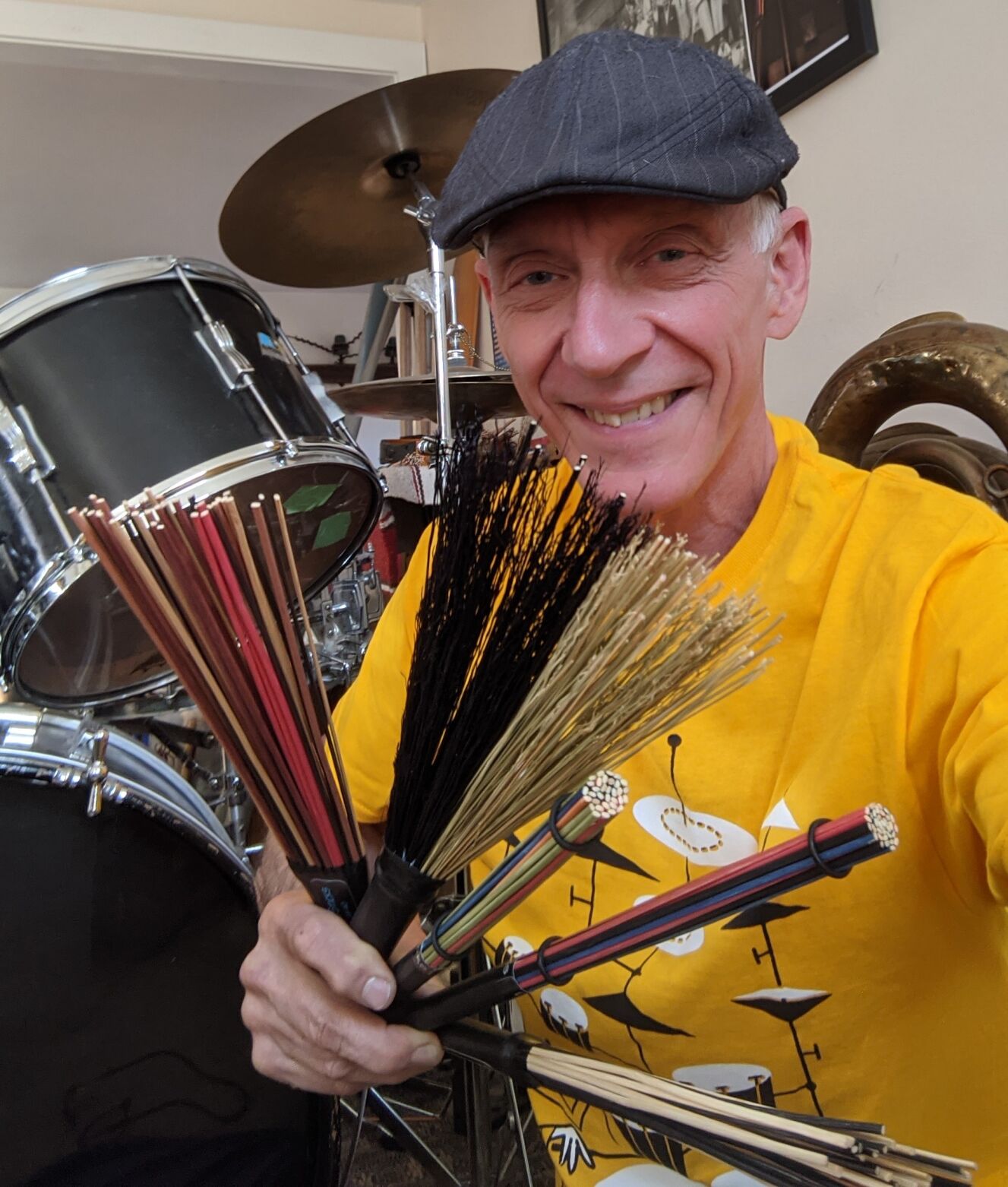 Dave Deming, a carpenter and licensed home remodeler in Williamstown, created his own version of fan-like bundles of sticks for drummers.

Dave Deming, a carpenter and licensed home remodeler in Williamstown, created his own version of fan-like bundles of sticks for drummers.

He’d just gotten back to playing again after years away from it, and had brought his drum kit to the American Legion to play. At one point in the night, he let another drummer sit in, and saw him take out a pair of his sticks — a mass-produced bundle of smaller sticks bound together designed to be played for quieter numbers. Then he watched in annoyance as the band launched into a loud rock song and the drummer smashed the stick into twigs.

A few days later he went to the music store ready to drop another $20 or so on a replacement when he felt a bolt of inspiration.

“I thought, well, I’m a carpenter,” he said. “Maybe I can cobble my own together out of shish-kebab skewers or something.”

The end result of his tinkering is considerably more sophisticated. Deming, who is a carpenter and licensed home remodeler in Williamstown, began experimenting and eventually settled on fan-like bundles made of bamboo or broom straw. The variations he came up with are louder and sturdier than wire brushes, but not as loud and sharp as regular drumsticks. Their sound is warm and textured, and offer intriguing sonic possibilities in the right hands.

At first that meant getting them to other drummers in the area, and as he got better at making them, he sent them to pros further afield. From there, thanks largely to word of mouth, they’ve gotten to the most unexpected places — used on hit indie albums, Broadway, even a Rolling Stones album.

“I love making them,” he said. “I really like the engagement with what percussionists tell me, and being a drummer myself I know exactly what they are talking about.”

Today, there are several kinds of “DEM’Sticks,” as he named them, for a variety of different purposes, costing from $28 to $46 a pair. Some are fan-shaped, others are bundled and round with O-rings that can change the sound. Most are made of bamboo, but some are from straw, and the appeal is largely the same.

For a long time, especially in the rock era, drumming has been about rhythm and intensity. But Deming said today, percussionists are interested in finding new depth in their sound.

“Sonic texture is what this is all about,” he said. “Drummers just love that. You can hear it, and the quality of microphones today is just fabulous. They’ll pick up those kinds of subtleties, and it becomes a part of the texture of the song.”

And for professional percussionists, it’s an important way they can set themselves apart from the pack. “Drummers who are really interested in creating their own sound have really taken to these,” he said.

“[They] are not only sticks, but an instrument that has become a part of my sound."

Drummer Keita Ogawa has worked with Yo-Yo Ma and is a part of the jazz-rock collective Snarky Puppy and Bokanté, and uses a variety of Deming’s sticks, which he describes as “well balanced … and really easy to control and play.” He uses the fans on high-pitch drums, which he said creates the sound of multiple people playing at the same time. And he uses brooms on a cajon, a box-shaped percussion instrument for creating a “warm bass tone sound.”

“[They] are not only sticks, but an instrument that has become a part of my sound,” Ogawa said. “I really admire and love Dave’s work.”

During a conversation at his home studio on North Hoosac Road, Deming is very clear that he hasn’t reinvented the wheel. Brush-style sticks are common in traditional African drumming — he named his popular fan-type brush “African Fans” as an acknowledgement of it. And wire brushes have been common in jazz forever, but with certain limits.

“They are not meant to be played loud,” Deming said. “If you really start whacking them hard you’ll have $30 of wire needles on the floor after the song.”

Western drummers have long used a type of stick called a rute, which is a bundle of wooden twigs, which became popular for certain purposes in 1985 when a company started mass-producing what they called “Hot Rods.” This is the stick Dave Grohl plays in Nirvana’s MTV Unplugged special, and the specific type of stick ruined at that fateful open-mic night.

The difference is Deming’s sticks are completely handmade. Each takes about a half-hour of work, and is a product of years of what he called “Darwinistic” trial and error. And all along the way, he eagerly sought advice and feedback from drummers. That has led to some variations, like the shorter version with a metal tap at the bottom that he custom-made for a customer in Sweden.

Their craftsmanship and utility quickly earned a reputation, helped a bit by social media. That led to a custom black-and-white model called the Zebra that he made for drummer Carter McLean who plays for the Broadway production of “The Lion King.” Other places you can hear his sticks include by drummer Amy Aileen Wood on the track “Shameika” on Fiona Apple’s new album, “Fetch the Bolt Cutters.” Charlie Watts of the Rolling Stones plays one on the track “Little Rain” on the recent album “Blue and Lonesome.”

Among those who found his sticks is Jamey Haddad, a jazz and world music drummer who plays with Paul Simon and now teaches at Oberlin Conservatory of Music.

He said he was impressed with Deming’s ability to think beyond traditional sounds. “Dave checked out what was out there, and set about to try to remedy that by trying different ideas and getting feedback,” Haddad said. “This is a work of love, you can’t do it without spending a lot of time on it.”

He described Deming as a “real searcher,” and someone whose sticks are particularly useful for acoustic settings and alternate set-ups, where too soft would be lost and too loud would be overpowering.

“He’s got solutions that bring a lot of sound into focus in a way a regular drumstick or wire brush can’t offer,” he said. “He deserves a lot of credit.”

Deming said all of this just flows from his love of drumming. He grew up in the East Bay area of California, and began playing at 13, after selling Christmas cards to afford his first kit. He had a brother eight years older who was plugged in to the Bay Area rock scene, and remembers sitting in his car when he put on a live recording of Cream, and being transfixed by Ginger Baker’s style. It was more complicated and sophisticated than he had heard before, and when he saw a television special about African drumming, and realized the similarities, it was mind-blowing.

He played all he could when he was young, but settled on becoming a carpenter and remodeler, and in 1990 he settled in the Berkshires where his then-wife was from. He said he had barely touched a kit until after his kids had moved on and he started going to open-mic nights and hanging around other drummers.

At the moment, his side hustle isn’t lucrative, and he has no plans to branch off into regular drumsticks or mallets or any other specialty gear. But that’s not the point, it’s a way to stay connected to the music.

“There are only so many drummers out there,” he said. “You meet one, and this guy knows that guy, and he likes them and asks if you have an extra pair of these.”