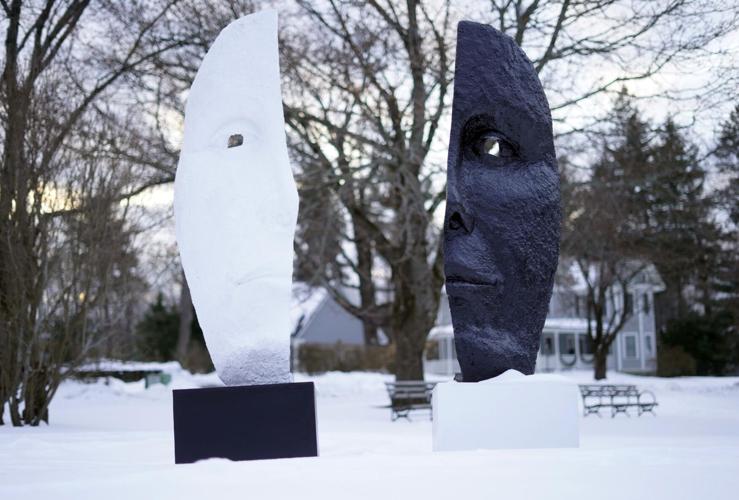 “Gates of Transcendence” by Michael Alfano in Lilac Park. “This [piece] is to get at the sense that we are all one and part of the same human experience,” Alfano said. 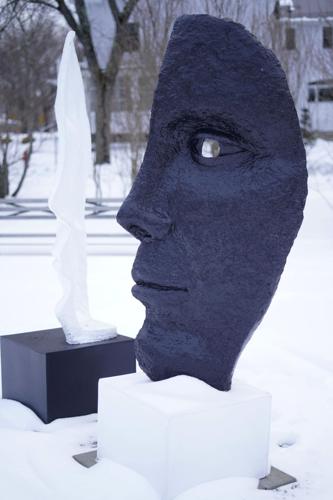 “Gates of Transcendence” shows an effort to unite, according to the artist. 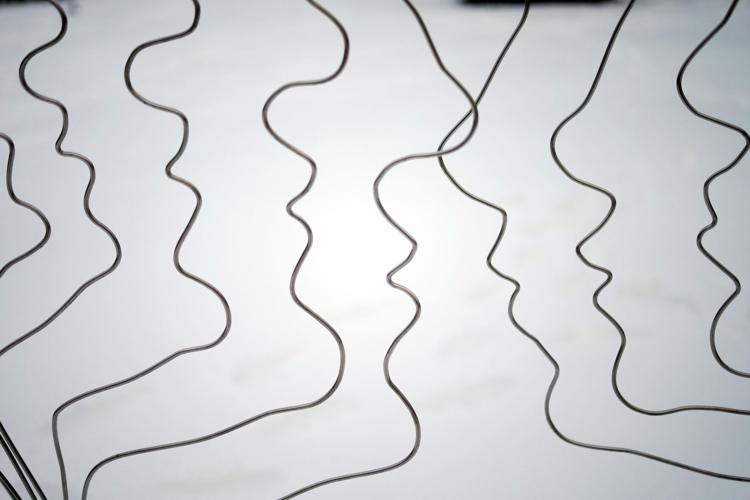 “Evolution” by Michael Alfano, features two large heads that are made up of smaller faces. 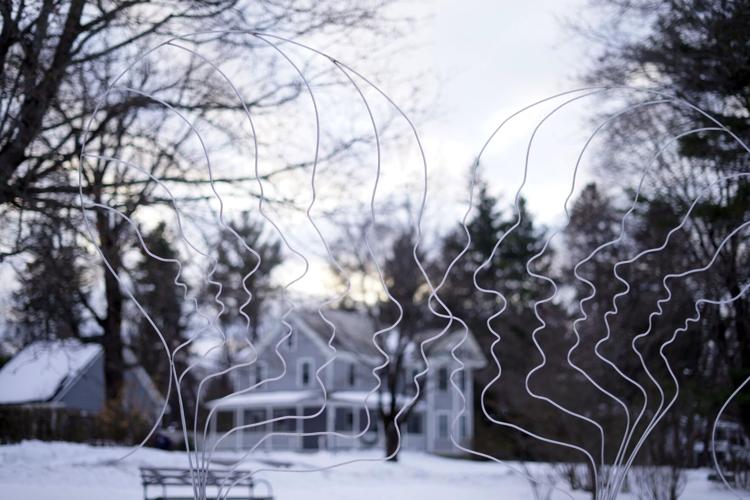 “Evolution” by Michael Alfano, is set on rails so the two faces can slide toward one another. 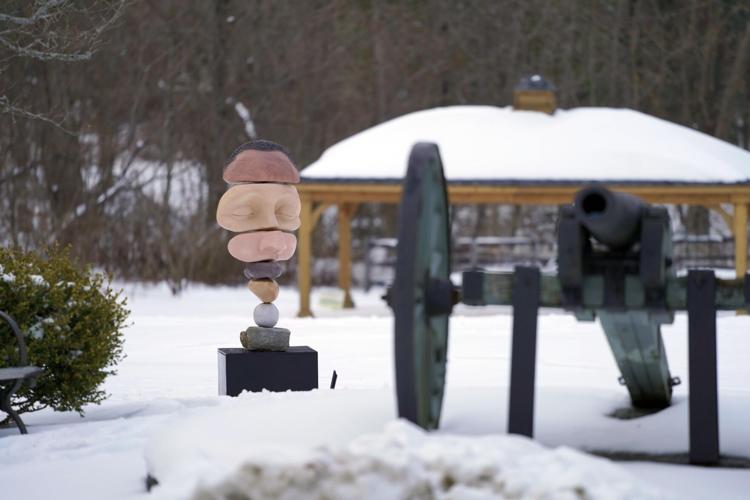 With “Turning Heads," visitors can rotate the pieces to see the faces they want to see, create. 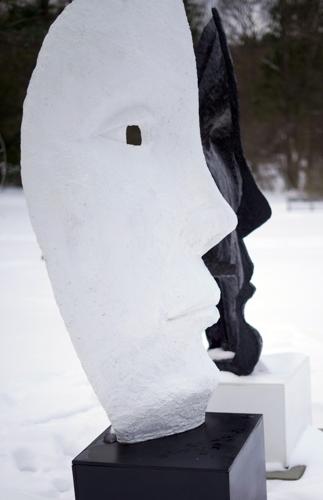 Michael Alfano's three sculptures will be on display in Lilac Park in Lenox until the spring. 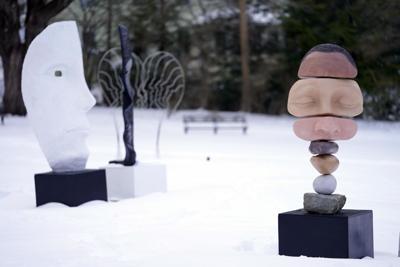 “Gates of Transcendence” shows an effort to unite, according to the artist.

“Evolution” by Michael Alfano, is set on rails so the two faces can slide toward one another.

Michael Alfano's three sculptures will be on display in Lilac Park in Lenox until the spring.

LENOX — With a new exhibition at The Wit Gallery in Lenox, sculptor Michael Alfano was given the opportunity to bring together three of his figures as a strong advocacy for unity, and to do so outside to give art-seekers an opportunity to commune with the works safely.

The Hopkinton-based sculptor is known for his metal work in bronze and cold cast copper, which are often displayed outdoors in public. The show consists of three of Alfano’s large face sculptures, and will be viewable in Lilac Park through the spring.

Racial justice is the theme of this special grouping with a focus on, as Alfano explained, “breaking down the constructs of prejudice.”

Gallery owner Lynda Strauch emphasizes this part of the show.

“The sculptures included in this exhibition argue that it is time for us, as a culture and a society, to break free of the forms that are holding us back — in this case, institutional inequality,” she said.

Alfano’s pieces take their lead from Buddhist concepts, which are central to his work and his life. Alfano includes a quote from the Tao — “The unnamable is the eternally real. Naming is the origin of all particular things” — with his sculpture “Turning Heads,” which he points to as one visible indication of the Buddhist tones in the work.

“One aspect of this is that when you break apart society by naming and labeling different ethnic groups, you lay the foundation for prejudice and racial division,” he said. “Perhaps, if we can get beyond naming and labeling, we can leave racial strife behind us.”

“Turning Heads” invites viewer participation. The sculpture is a large face with components painted in a different skin tones. It also rotates, allowing visitors to make the face as they would want to see it.

“It celebrates our individual diversity, while simultaneously joining together to create one face and one human family,” Alfano said.

"Gates of Transcendence" also uses the human face to express other Buddhist concepts in service of peace. The piece is split down the middle, one side painted black, the other side white.

“This is to get at the sense that we are all one and part of the same human experience,” Alfano said. "As such, we need to learn to interact with one another in a non-prejudicial way. The base for the black half of the face is painted white, and the base for the white face is painted black. This is to illustrate that we are not in a struggle of black against white, but instead in an effort to unite.”

And as in the case of “Evolution,” the realization of the Buddhist ideas remain abstract in their physical representation. Featuring two large heads that are made up of smaller faces, the figures are on rails that slide toward each other. When pushed to a certain point, they overlap, intertwine, join as one.

“You cannot tell where one face begins and other ends,” said Alfano. “The traditional barriers that divide one from another are broken down, and this hints at the fact that we are all integrally tied to one another.”

This mix of abstract concepts that address the human experience and the reality of the practical engineering skills that it takes to fashion sculptures to express them are what draws attention to Alfano’s work. They combine into a dynamism that highlights the humanity that goes into the pieces, but also the humanity that bursts out from them.

“What draws me to Michael’s work is how well he translates the idea that we — no matter your belief — are made up of spirit, energy, light, beauty, contained in form,” Strauch said. “His work often depicts the emergence of this light from form or the importance of breaking free from form. His sculptures depict the moment energy is released and made free."

Alfano understands the need for a place to commune over the event of the past year, both in regard to the pandemic and the emotions it brings forth, and the Black Lives Matters protests that have appeared throughout the country in response to the murders of Black Americans at the hands of police. He feels his work has always spoken to concepts that are shared in reactions to these events and hopes that sharing them in the open will place them where they can do the most good right now.

“The park was chosen because it is an open air, safe space to reflect and meditate during these chaotic times,” Alfano said. “Our hope is that these sculptures will inspire proactive dialogue.”

When: On view now through the spring