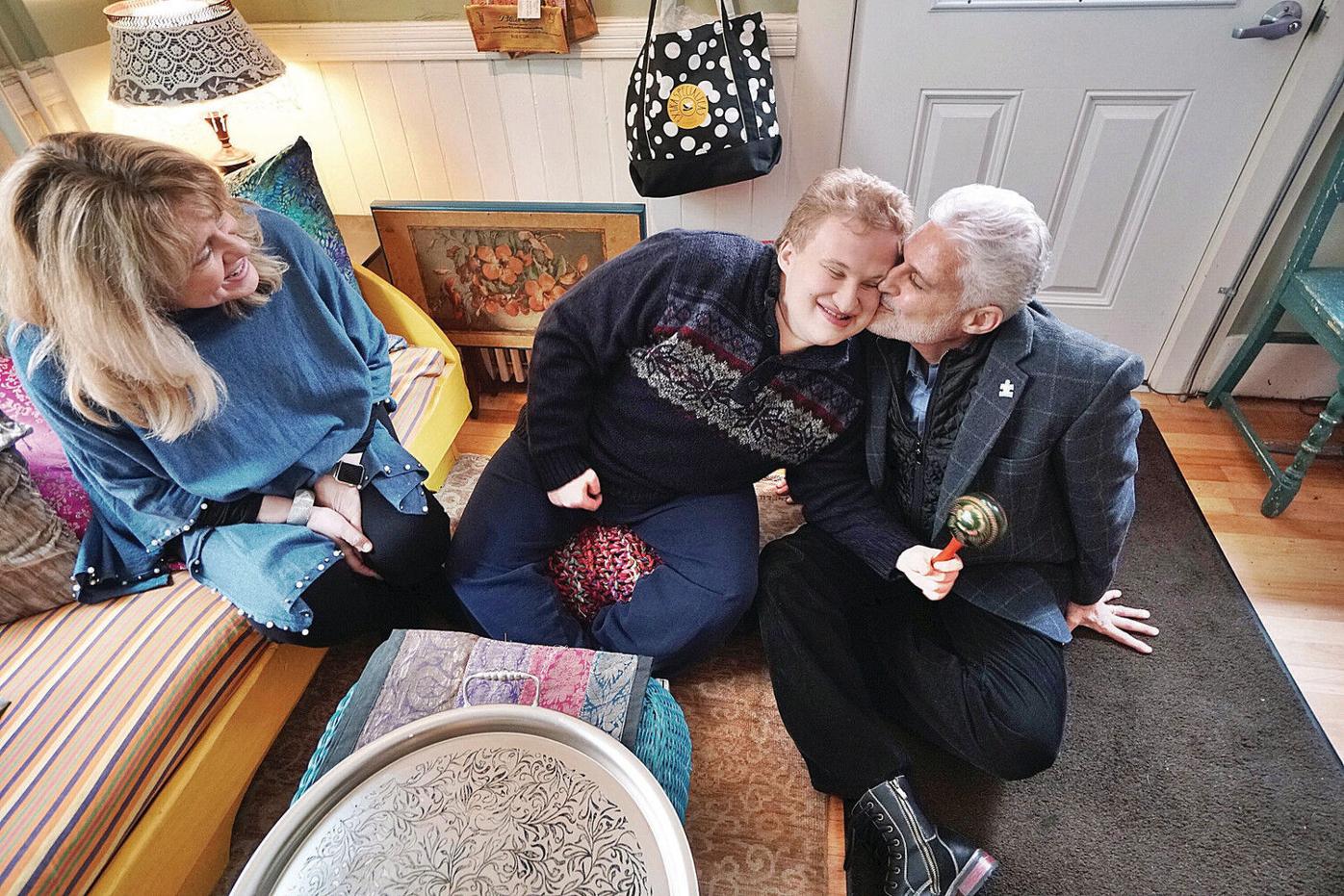 Cherri Sanes, the owner of ExtraSpecialTeas in Great Barrington spends time with her son Jache and husband Scott. Jache, who has autism, was the inspiration for ExtraSpecialTeas, a teahouse the Sanees founded to employs adults who have special needs. 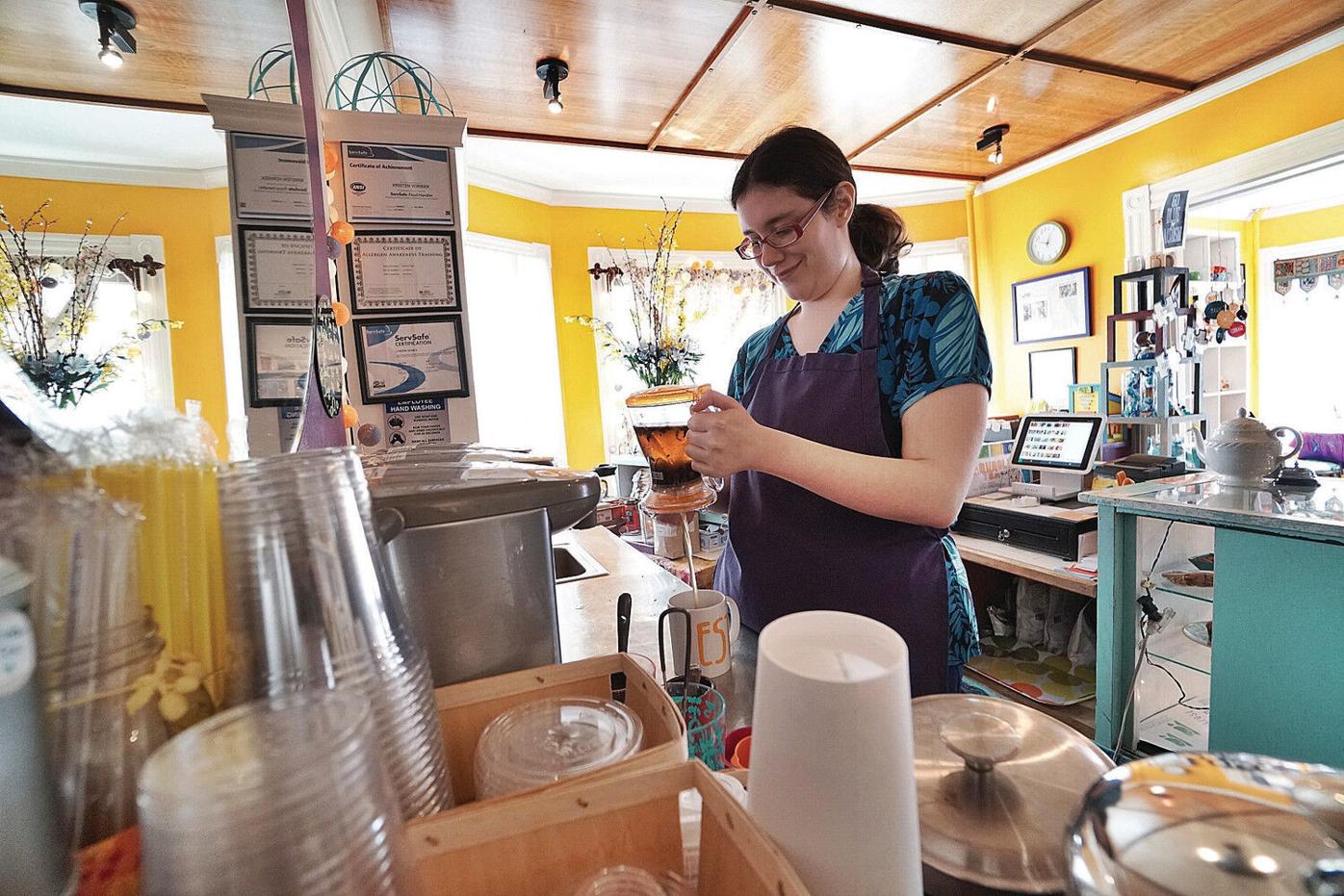 Erin Crowell of Housatonic is one ExtraSpecialTeas' 12 employees who range in age from 22 to 50. She helps pour tea for customers and run the cash register.

Cherri Sanes, the owner of ExtraSpecialTeas in Great Barrington spends time with her son Jache and husband Scott. Jache, who has autism, was the inspiration for ExtraSpecialTeas, a teahouse the Sanees founded to employs adults who have special needs.

Erin Crowell of Housatonic is one ExtraSpecialTeas' 12 employees who range in age from 22 to 50. She helps pour tea for customers and run the cash register.

GREAT BARRINGTON — Sonali Reynolds is 27 and has special needs.

She has trouble fitting into mainstream life, especially when it comes to employment. Like many of her peers, Reynolds benefited from state and federal government student educational programs in her youth. But those services lapse at age 22, often leaving them facing an uncertain future.

But thanks to a unique Berkshire-based business, ExtraSpecialTeas, Reynolds has found a niche in mainstream adult life.

Located in a small colorfully decorated Victorian house at 2 Elm St., the tea house employs those with special needs who have become too old to qualify for student education programs.

"It's taken a long time to find a place where she belongs," said Reynolds' father, John Reynolds, of Richmond, who adopted his daughter from her native India 17 years ago.

"She's taken a leadership role; she's helping the new kids learn how to do things," he said. "She's helping a little bit with managing inventory, which in a regular setting she couldn't do."

Giving those with special needs a way to succeed within the mainstream community, is what ExtraSpecialTeas' founders, Cherri and Scott Sanes, were attempting to do when they founded their business two years ago this month. Like Reynolds, the Saneses had firsthand experience with this issue. Their son, Jache, who is 25, has autism.

"He's the inspiration for the projects," Cherri said. "We wanted a place where Jache and others could be included not excluded."

Unfortunately, exclusion is often the norm for people with special needs once they become older than 22.

"The state and federal government does well for special needs children," Scott said. "But when you get to be 22 all of that education stops, and they are left a lot of time with nowhere to turn. ... A great majority stay home all day. What we were hoping to provide is that folks who are usually thought of as unemployable have a place to participate and interact in the community."

"It works both ways," he said. "There's awareness created because the community interacts with people who have different kinds of challenges. So instead of locking them away somewhere, we really wanted to give people a chance to interact with the special needs community and see how much they can bring into the community."

A nonprofit, ExtraSpecialTeas currently employs 12 people with special needs who are between the ages of 22 and 50. Those who don't assist in the store participate in a day program that is run by the Sanes. All of the participants are referred to ExtraSpecialTeas by the state Department of Developmental Services, which has an office in Pittsfield.

Melissa Guyer, the director of the agency's Berkshire-area office, said those with special needs are referred to DDS for adult education programs after they turn 22. Working at ExtraSpecialTeas is one of the options available to those who want to participate in a day work program, she said.

"It's extremely valuable," Guyer said. "To be able to earn a paycheck and contribute in that way and be able to learn real-life skills has been wonderful. To make a generalization, people with intellectual disabilities are often not in the workforce or are given as many opportunities. I think being in an employment situation that's the same as your sibling or mom and dad shows that anybody can do it."

Although DDS provides other options for adults with special needs, and several social service agencies in the Berkshires provide those services, Guyer said there are no other places in the Berkshires similar to ExtraSpecialTeas, which sells tea and related accessories. The Saneses are unique "in that they run their own business," she said.

Cherri is originally from Texas; Scott is from Chicago. They were raising Jache in Texas when they heard about a home-based autism program offered by the Option Institute in Sheffield.

"We were doing the program at home for four years, but we loved the Berkshires every time we came up here for training, and after the third visit we decided to move here," Scott said.

After meeting people who had family members with special needs who were faced with either institutionalizing them or providing the care themselves, Cherri came up with the idea of creating a space where people with special needs and the greater community could come together. The idea for a tea house was born.

"I don't think we ever discussed any other type of endeavor," Scott said. "Cherri thought that the communal aspect of a tea house was the way to go.

"I like tea, and there's a little different feel in a tea house than a coffeehouse," she said.

Tea houses differ from tea rooms or tea shops because they are places dedicated to both serving and enjoying tea, according a description posted on a blog by Englishteastore.com. They are popular in Asian countries, particularly in Japan where tea is considered to be an emergency supply.

The Saneses, who lived in Sheffield at the time they came up with their idea, chose Great Barrington for the site because they thought the town was progressive enough to accept the idea.

"This would not necessarily go in a place that wasn't so inviting and progressive in their approach to things," Cherri said. "It was very welcoming."

Things have gone well enough that ExtraSpecialTeas is planning to open an online store next month, which will allow the Saneses to employ more people. Given the limits of public transportation in the Berkshires, it's difficult for everyone in the Berkshires who wants to work for ExtraSpecialTeas to get to Great Barrington, but the Saneses are working with the state to provide a van that will be able to make pickups in both Pittsfield and Lee.

"I think that's going to be a real game changer for opening up the opportunities here for people from North County because they can take the van down here," said Scott, who expects the service to be in place within the next few months.

ExtraSpecialTeas relies heavily on donations and supports from other entities.

"We're a nonprofit and let me tell you, there ain't any profit," Scott said.

One of the firm's major contributors is Tiesta Teas of Chicago, which provides the shop with all of its tea products. Founded in 2010 by two childhood friends who fell in love with tea while studying in the Czech Republic, Tiesta Teas features 50 brands of loose leaf tea blends that feature real fruits and herbs. The company is also socially conscious. Each winter it holds an event in Chicago called "Spread The Warmth" where employees pass out hot tea, warm clothing and food to those who live on the streets of one of America's coldest cities. The Saneses learned of Tiesta Tea through a mutual acquaintance when they were planning to launch their venture.

"I was able to talk with Cherri and Scott from the very beginning." said Tiesta Teas' marketing director Ashley Whitney, who attended the tea house's second anniversary celebration ceremony in Great Barrington in early April. "We love their mission and what they're about. They're very passionate about tea and sharing that passion with others."

The proof of the Saneses' work can be seen in the faces of those who work at ExtraSpecialTeas.

Erin Crowell, 30, of Housatonic, began working there last year. She's now helping to run the cash register. How does she describe those duties?