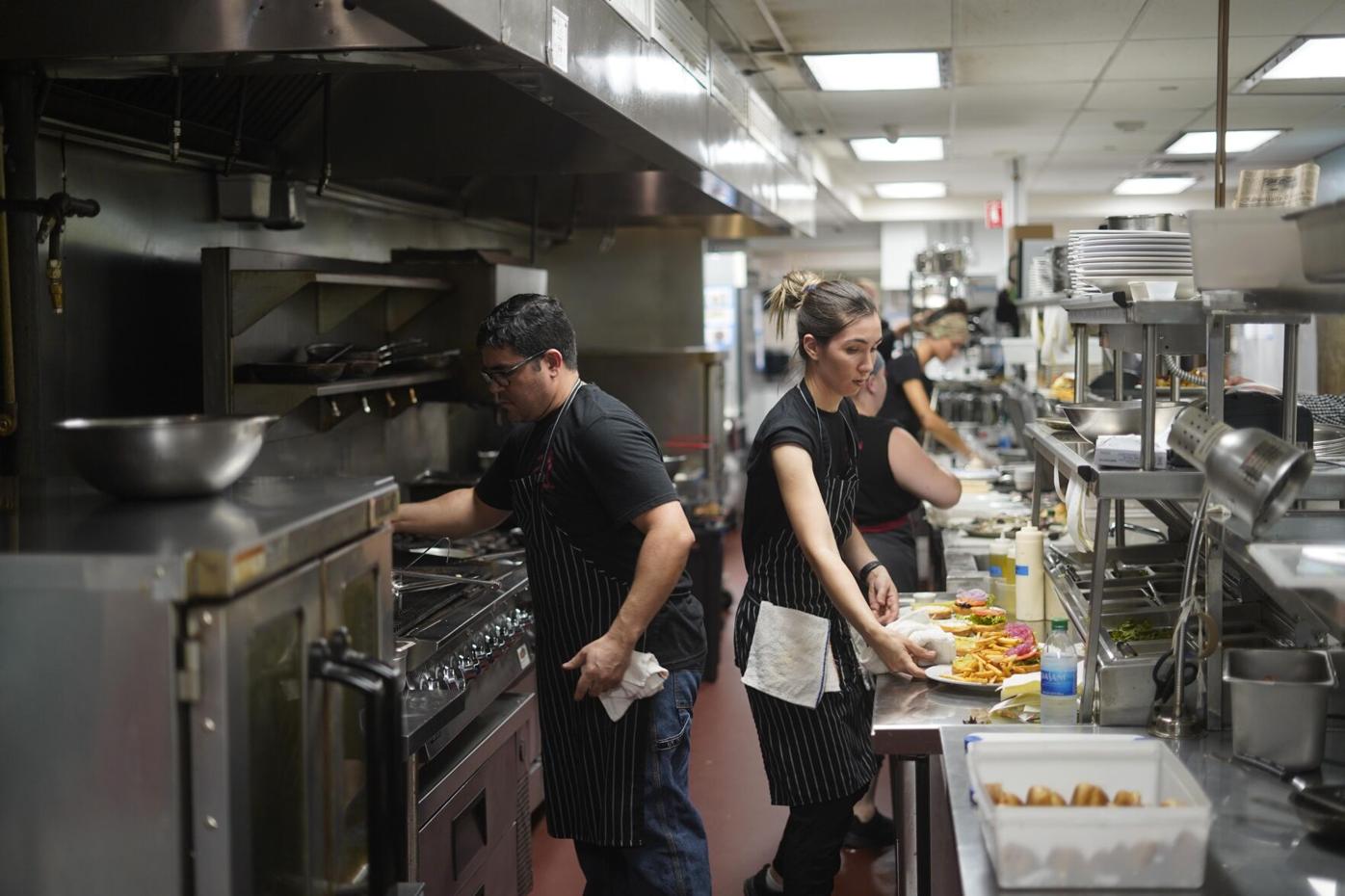 The kitchen at the Red Lion Inn in Stockbridge is a flurry of activity at lunchtime Monday. 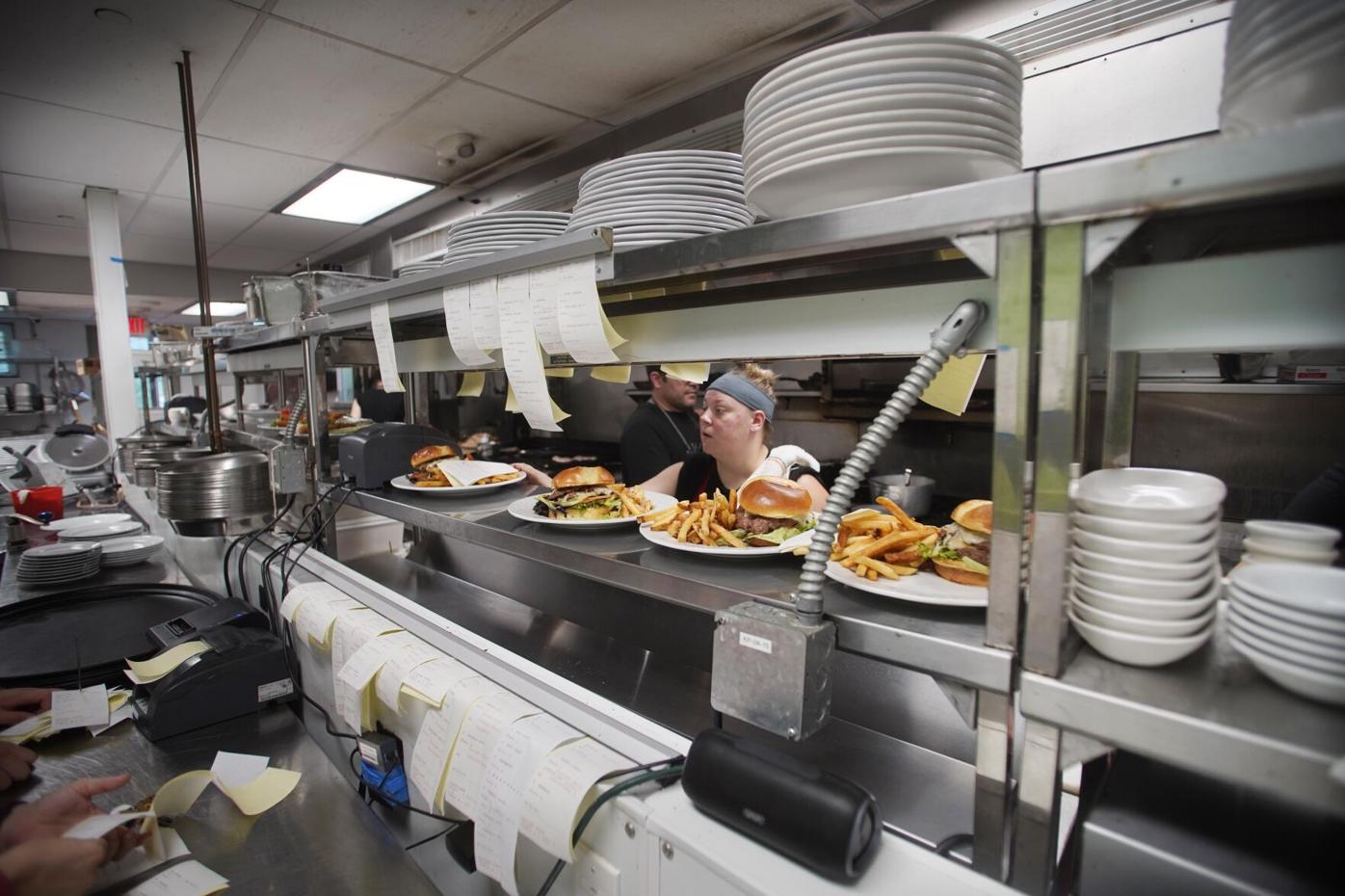 Orders stack up Monday in the kitchen at the Red Lion Inn in Stockbridge. A husband-and-wife team has taken the helm of the restaurant operation.

STOCKBRIDGE — There is a new chef in town, part of a husband-and-wife team to refresh and retool the Red Lion Inn’s main dining room, seasonal courtyard and the Lion’s Den, a favorite among locals expected to reopen by late fall.

Executive chef Jon Sterrett, 37, and his wife, director of restaurants Jen Gelormino, 40, arrived in May from Pittsburgh and spent their first three months learning the ropes in the kitchen and “the front of the house.”

“Our culinary journey here has evolved and had many chapters with a lot of talented people who have contributed to each of those chapters,” said Sarah Eustis, CEO of parent company Main Street Hospitality and third-generation family steward of the Red Lion.

“We wanted not only to elevate and evolve the food, but also elevate the culture in our culinary department,” she said. Sterrett’s role is to serve as a role model and mentor for the staff by “teaching, coaching and doing,” Eustis said.

“All the young people in the organization understand that, and they observe that he’s invested, and it’s not about pointing, throwing pots and yelling at people. Kitchens used to be like that.”

Chef Jon Sterrett has been named Executive Chef at the Red Lion Inn in Stockbridge.

Eustis acknowledged that “a lot of people are moving out of the food and beverage industry because of the way they were treated, the hours, the thanklessness. We are changing that; it’s not just about the food.”

As Sterrett put it, “We’re essentially rebuilding this thing from the ground up.” He described Gelormino as “a food and beverage powerhouse” who is supervising the dining room operation and creating harmony “between the back and front of the house, coaching the staff and setting the standard for everyone.”

Eustis described the effects of the COVID-19 pandemic over the past 18 months as “particularly grueling for the food and beverage part of our business. It taught us a lot about who we are and who we want to be and how essential the nourishment that we provide here is to the community.”

As a result, it deepened a concern over the type of leadership the inn wanted and needed “in the culinary engine, which is the kitchen, but also in the front of the house,” Eustis said. She sensed an opportunity to enhance the synergy between the kitchen operation and the dining experience “to make that more harmonious and powerful.”

Sterrett approached Eustis and General Manager Max Scherff, offering what Eustis called a “compelling interview” and auditioning by whipping up a five-course meal for the team. “There were a lot of positive emotional reactions,” Eustis recalled. “Even a tear or two was shed because it was so delicious.”

“It was a great introductory experience for all of us,” Sterrett agreed. “It all happened very quickly; we connected” with Sterrett’s added benefit of having worked with Scherff’s wife, Mindi Morin, at the Fairmont Hotel in Pittsburgh before she became executive director of Canyon Ranch in Lenox. Sterrett and his wife each reports directly to Scherff.

Sterrett began his culinary career by flipping burgers at a McDonald’s in Pittsburgh, rising through the ranks to his most recent position as executive chef at the downtown Distrikt Hotel. No surprise that one of his first new lunch menu items at the Red Lion is a “Smashburger,” an upscale house-ground sirloin with thinner, juicy meat patties, with Cabot cheddar, grilled onion, dijonnaise, pickles, Arcadian greens and tomato on a potato roll.

“The kitchen needs me to be very hands-on right now on a very granular level,” he said. Sterrett has been involved deeply in every aspect, including sourcing goods, designing specials and making sure there is sufficient staff.

The menu continues to evolve, but several favorites, such as New England clam chowder and the traditional turkey dinner, remain, along with a “playful” approach Sterrett described as “a love letter to the Berkshires through a French filter.”

“It’s important to let a bit of yourself shine through,” he pointed out. “What we do in the kitchen is very stressful and strenuous, and to take a lighthearted approach really just makes everything better.”

As for the locally popular Lion’s Den nightspot and gathering place, Eustis foresees an opening by the end of October or early November, including live music, after repairs and upgrades to “bring it forward” with its traditional appeal to younger generations.

“We want to continue to be beloved in the Berkshires,” she added. The reopening of the Tap House in West Stockbridge is in the planning stages.

“It’s our job now to make this a place where people really want to work, because it’s a buyers’ market for them,” Eustis said. “It’s not just about paying them fair wages, it is about creating a culture where they are heard, where they feel they have a voice.”