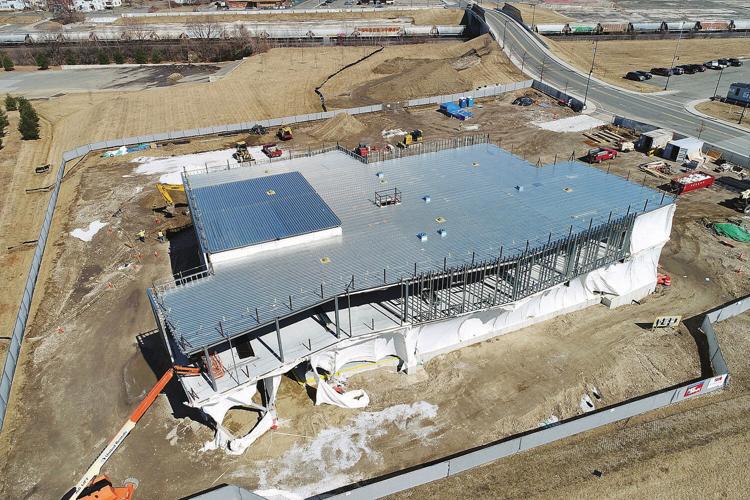 The exterior framing of the Berkshire Innovation Center gives shape to the structure in the William Stanley Business Park in Pittsfield as seen from the air April 2 in Pittsfield. 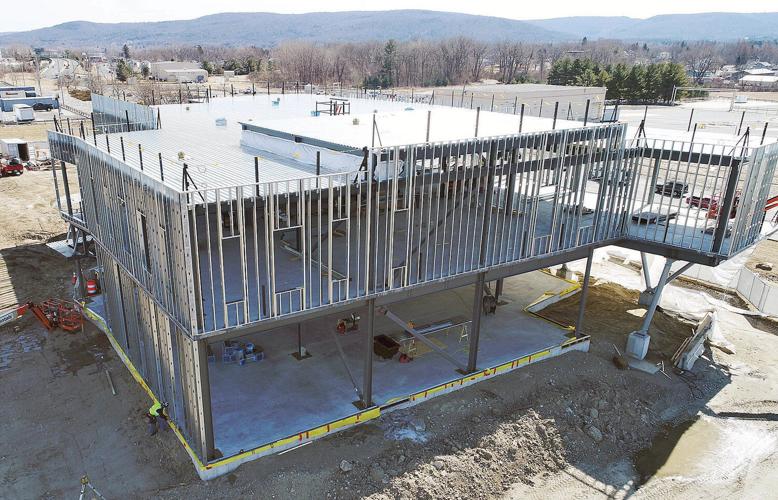 The exterior framing of the Berkshire Innovation Center gives shape to the structure in the William Stanley Business Park as seen from the air April 2 in Pittsfield.

The exterior framing of the Berkshire Innovation Center gives shape to the structure in the William Stanley Business Park in Pittsfield as seen from the air April 2 in Pittsfield.

The exterior framing of the Berkshire Innovation Center gives shape to the structure in the William Stanley Business Park as seen from the air April 2 in Pittsfield.

PITTSFIELD — The pieces that make up the puzzle that has been the Berkshire Innovation Center are beginning to "take shape," with the facility on track for a fall opening. And with the construction running on schedule, officials are looking ahead to the next steps: attracting tenants to the building and surrounding William Stanley Business Park.

"We're looking at a mid-October time frame, but good weather could accelerate that," said BIC Executive Director Scott Longley at Wednesday's meeting of the Pittsfield Economic Development Authority board. "Progress has begun to really pick up."

Construction began in September on the $13.8 million center, which will include training facilities, biotech wet space, clean rooms and office and event space for small to medium-sized companies in the Berkshires. Its construction is considered to be a key part of the development of the mostly vacant 52-acre business park, which once was home to General Electric Co.

At a ceremony marking the end of the first phase of the BIC's construction in January, construction was about 50 percent complete and local officials said the two-story, 20,000-square-foot structure would probably open in mid- to late October.

In a briefing to PEDA board members, Longley said the BIC "really began to take shape" in February as both flooring and decking were added. A symbolic topping off ceremony was held in January to commemorate the completion of the building's exterior skeleton.

In March, the structure was covered in plastic so that flooring could be installed inside the building and framing could be done on the outside, Longley said.

"We are truly within weeks of framing the interior walls," he said.

On April 22, BIC officials are scheduled to meet in Pittsfield with Ira Moskowitz, the director of the Massachusetts Technology Collaborative's advanced manufacturing program.

"The goal of Ira's visit is to talk about what funds are available for local companies," Longley said.

BIC officials have also begun discussions with a Washington-based nonprofit associated with the pharmaceutical and biopharmaceutical industries that is interested in providing training in advanced manufacturing at the workforce development center, he said.

Coakley said the costs that companies need to assume when locating to the business park have hampered development.

"With one company that we talked about, once [the proposal] got up to the corporate level they realized what the costs would be and went quiet," he said.

Wayfair, which is planning to open a call center in Pittsfield this fall that is expected to bring 300 jobs to the Berkshires, considered relocating to the Stanley Business Park before choosing Pittsfield's Clock Tower Business Center for the site, Coakley said.

He said officials showed Wayfair "five or six" possible locations for its call center and that the decision came down to either the Clock Tower or the business park.

Wayfair is expected to make between $1 million and $2 million in improvements to the Clock Tower complex, Coakley said.