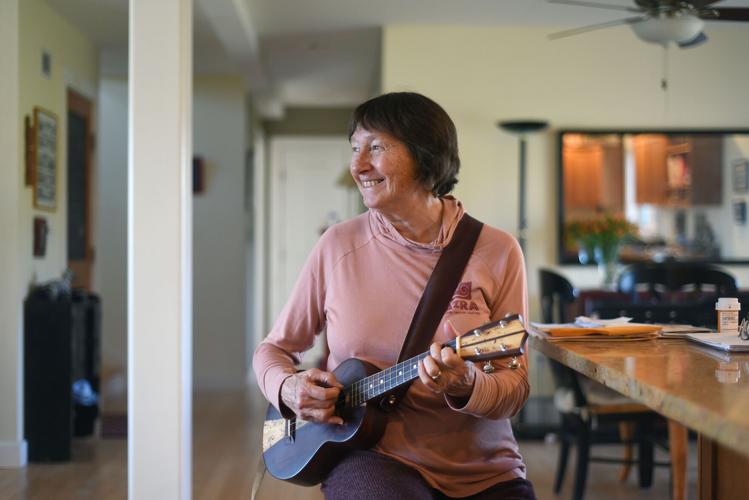 For singer-songwriter Bernice Lewis, the pandemic has turned a work world upside down. She was photographed in her Williamstown home last week. 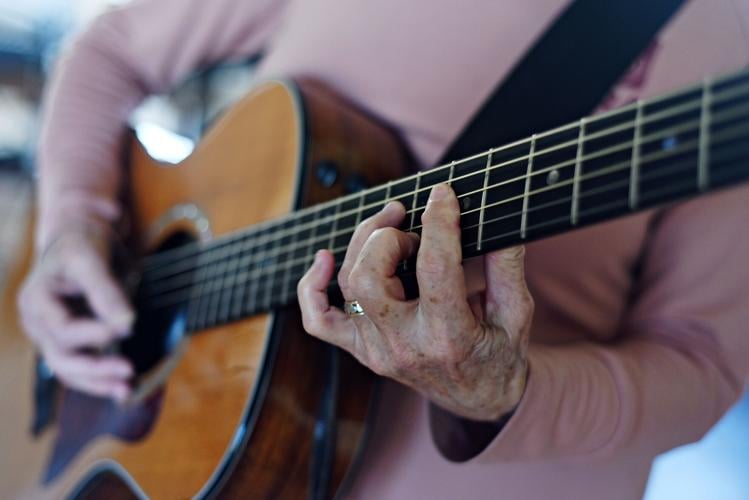 For nearly four decades, singer-songwriter Bernice Lewis of Williamstown built a national reputation as an original American musician. The pandemic turned that upside-down. 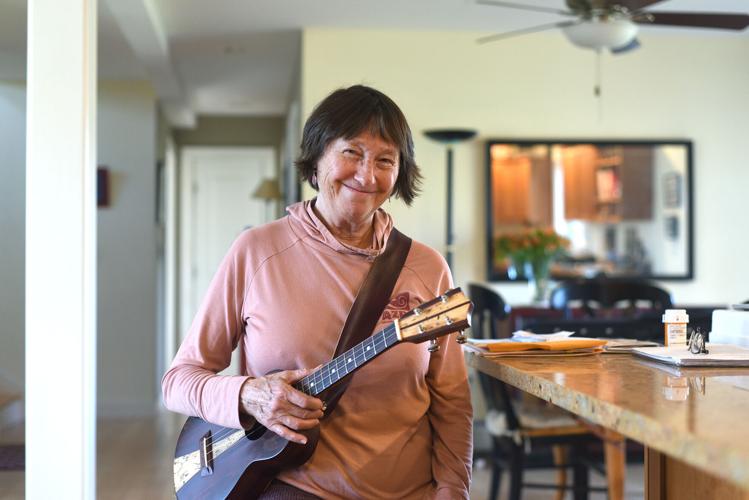 The pandemic shut down music venues everywhere in March 2020. “It just fell straight off a cliff in March,” Bernice Lewis says. “Some amazing stuff on my calendar disappeared.” 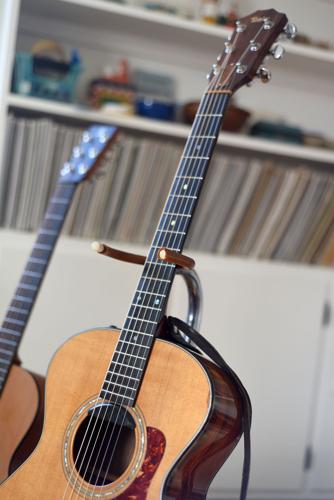 “If you are hoping to be creative, I’d like to remind you that we don’t create in a vacuum,” Bernice Lewis told her newsletter readers 20 months ago.

WILLIAMSTOWN — In the last few weeks of Project Paycheck reporting, I’ve talked with people in the Berkshires looking for the smart thing to do next, given the job changes — and the work-life questions — forced on us by the pandemic.

Last week, I went up to Williamstown and had tea with Bernice Lewis, a nationally known singer-songwriter who built a career the only way you could before social media — one performance at a time.

She had coffee — a couple cups of it.

“It just fell straight off a cliff in March. Some amazing stuff on my calendar disappeared.”

Bernice Lewis, singer-songwriter, speaking of the advent of the pandemic in 2020

We sat at a table in the big room that includes her family’s kitchen, a living room, and place to eat and, importantly, a place to make music, all with big views east to the Hoosac Range.

I’ve written about the phenomenon of the “great resignation,” the surprising number of people who are walking away from old jobs and careers. Lewis isn’t walking away. She’d gladly run right back to the music business that’s been her life going on four decades, if it was still there. She has performed all over the U.S., including at the Kennedy Center and as a featured performer on NPR’s “Mountain Stage” program. In 2008, Lewis was named an artist in residence with the National Park Service.

The Berkshire Eagle’s Project Paycheck explores work life changes in the region driven by the coronavirus pandemic. Led by Investigations Editor Larry Parnass, it probes why Berkshire County’s workforce remains at its smallest size in decades — and what that means for the region’s economic well-being.

The pandemic shut down music venues everywhere in March 2020. Let’s start there. “It just fell straight off a cliff in March,” Lewis told me. “Some amazing stuff on my calendar disappeared.”

Like a lot of performers, she used social media to stay in touch with her fans, producing Facebook Live performances from this room, this large room. I watched some home concerts back then, but didn’t look up Lewis’ until later.

Just my opinion here: It’s kind of like hugging through a blanket, which is perhaps Mark Zuckerberg’s vision of intimacy. It’s not at all like being in a music club, or at a festival, drowning in the sound, eating up the storytelling and being with people.

Lewis has won over critics as well as fans and fellow musicians. Two different music writers for The Boston Globe have saluted her: “An enlightening presence” (Steve Morse). “It is impossible not to have a good time listening to Lewis sing” (Scott Alarik).

Right around then, I used The Eagle’s Checkup column to invite people to report in on their pandemic experiences, from their kitchens and living rooms. I got a note from Lewis. She told me about her concerts on Facebook Live … of trying to “stay positive” … of getting ready to put in a garden.

She’d just shared a dispatch on her newsletter that leaned into how the pandemic was affecting a performing artist who had great venues and dates snatched away.

I relayed her message to a few friends, because I thought it said something real about how creative people cope. They do so honestly and with humor. My kind of people.

How the pandemic pushed a party mom, a nature lover and a gardener to reinvent their Berkshire work lives

“I’ve been functioning under the belief that I should be using this time to be productive, to pull projects from the deep cuts to-do list, to finish my novels and write a million songs and become a jazz guitar player and a classical pianist,” Lewis said in that note to her subscribers. “But my motivation is completely inconsistent. I recently spoke with my therapist and I wanted to share something she said. This time we are living in is a window of coping, not a window of self-improvement.

“Or, as Peter Mulvey (a folksinger from the Pioneer Valley) put it recently in his online concert, ‘Shakespeare wrote ‘King Lear’ when he was in quarantine for the Bubonic Plague. I got up this morning and put my pants on.’”

Looking over her message again, it feels like something pulled, crumpled, from a time capsule. But I think we can relate.

“If you are hoping to be creative, I’d like to remind you that we don’t create in a vacuum,” Lewis told her readers 20 months ago. “Be kind to yourselves, notice what you did accomplish today, even if it was as simple as preparing a healthy dinner.”

What happens after a career falls off a cliff?

I didn’t ask Lewis that, in those words, but I can see her pause, and shrug. You keep trying to get back to work.

Not her whole life, though. She also teaches, and that’s been a godsend. She is an artist associate in songwriting at Williams College, where her husband, Scott Lewis, directs the Outing Club. Bernice Lewis also teaches songwriting at Schreiner University, in Kerrville, Texas, and has taught at Colorado College and other places.

It doesn’t pay all the bills, but teaching keeps Lewis connected to the craft, regardless of what’s happening in the industry.

Lewis has two performances lined up in Israel in early 2022. She bought the plane tickets and they cost her $1,500, even though plane tickets, and planes, and airports, and the entire apparatus of touring, gets her pretty worked up. She’s been traveling to shows around the country for 35 years, after all. What all the hustle earned her was fans. Particularly in Texas, where listeners appreciate singer-songwriters who come by and tell their musical stories, and then do them the great honor of coming back to perform, again and again.

When the pandemic hit, Lewis was about to attend the Kerrville Folk Festival, in a town of that name about an hour northwest of San Antonio. The 2020 festival was moved to this past September, but limited to 200 tickets. Lewis had been a regular for years and years.

“I owe a lot of my career to the state of Texas,” Lewis tells me. They do like her down there. “Bernice Lewis may well be the frosting on the cake,” Rod Kennedy, the Kerrville festival’s director, once said of her.

The 50th anniversary of the Kerrville festival is scheduled for more than two weeks of shows in May and June. You can bet that Lewis, despite her deep affection for the festival, will be careful about when she buys tickets to travel.

The emergence of the omicron variant holds the potential to put yet another year, a third, largely on ice for performers. Just recently, First Night Northampton, one of the most durable yearly venues for western Massachusetts musicians, cancelled its indoor performances for this Friday because of the variant. Other venues have as well.

For the music industry, never mind what people tweet. This is the real cancel culture.

“The biggest challenge is that things keep getting cancelled,” Lewis said. “You’re back at square one. If you buy an airplane ticket and get cancelled, you’re not going to get your money back.”

When music streaming services put the screws to the recorded music industry, performers hit the road. Suddenly, tours weren’t just part of promoting a new recording, they paid the bills.

Since then, venues that used to populate the singer-songwriter’s itinerary have been dropping from the map. If they haven’t closed, Lewis says, they’re reluctant to make commitments. Or they make commitments and cancel.

“Pulling this all back together is a daunting thought, and still not really possible, with all these variants raging."

“Right now, it’s not even possible for most of us to put a tour together,” she said.

So what now? Lewis wonders.

Life on the road had already started to feel impossible. “Pulling this all back together is a daunting thought, and still not really possible, with all these variants raging,” Lewis told me. “Touring was always something where you wonder how long you could sustain it. The level of burnout just kept getting bigger and bigger.’

She’s not hopeful about actually getting up before audiences in Tel Aviv and Karmiel next month and in February in Israel, though she has club dates — and those airplane tickets.

Her last short tour before the pandemic was a trip to Florida in February 2020, when the coronavirus was already moving around the U.S. but not yet a household word. Her flights got messed up because of problems globally with the Boeing 737 MAX.

There she was, grounded, in the Sunshine State, with no idea, like the rest of us, of what was about to start.

“I never saw the beach,” she said.

This Lenox startup hunts job candidates who aren’t even looking

PROJECT PAYCHECK: One of this year’s tech startups in the Berkshires displays a little needle on its website, with a thread poking through. Jane and Eric Singer, of Lenox, aren't tailors, but they are altering what it means to post a local job online.

PROJECT PAYCHECK: Staffing agencies sit, as brokers, between the region’s many current job openings and today’s shallow pool of candidates. This is what they're seeing.