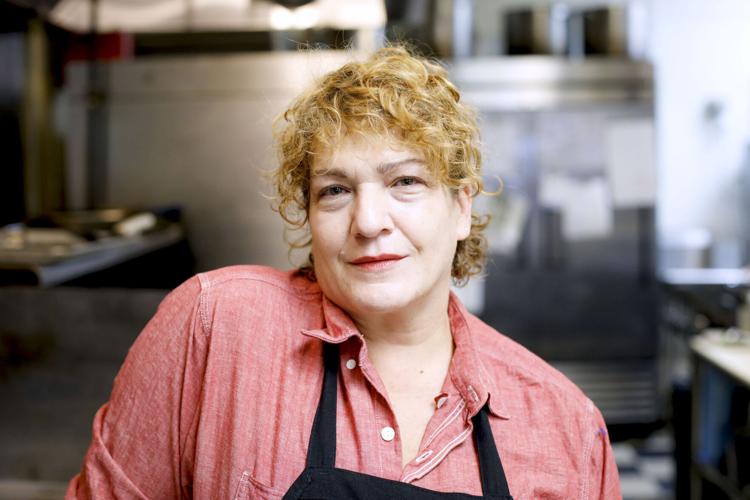 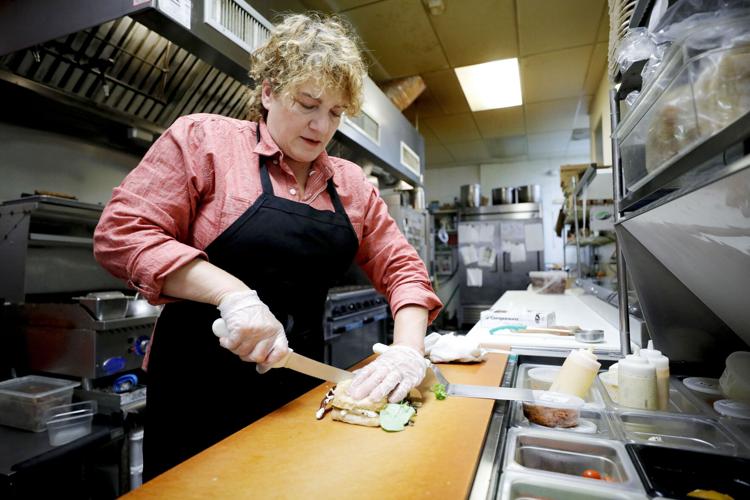 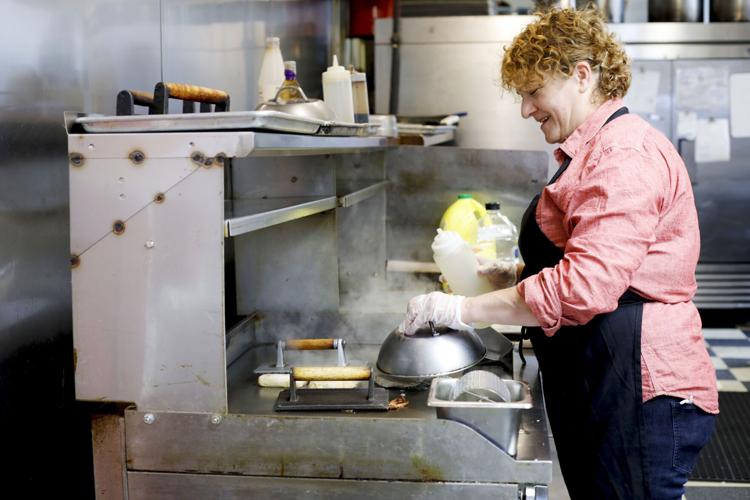 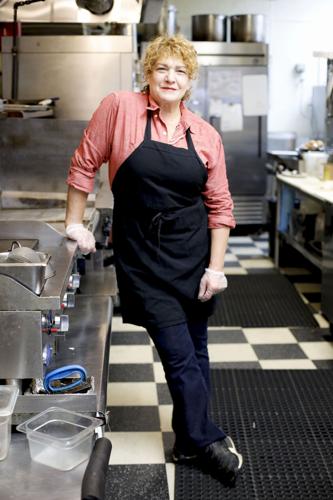 PITTSFIELD — Cooking is fun, but doing it professionally as a chef can be as difficult as it is rewarding.

Long days, working on weekends, running a kitchen, tons of responsibility; sometimes the work is about everything but the cooking.

Aura Whitman believes chefs need a certain amount of passion to do the job well, and she should know. A part-owner of Berkshire Mountain Bakery, who owned the former Cafe Reva in Pittsfield for 11 years, Whitman has worked at several other Berkshire establishments and runs her own catering business. She's been in the profession for almost 30 years.

Her passion for cooking has also taken her to Israel, the Le Cordon Bleu cooking school in Paris, which she attended for one year, and to the Culinary Institute of America, from which she graduated. In Paris, Whitman met Julia Child and cooked for her on the noted chef's 83rd birthday in 1995.

We spoke to the Cheshire resident about her craft, what it was like to cook for Julia Child, and why she is still so passionate about what she does.

Q: What led you to become a chef?

A: Kind of from early on I always liked cooking. I followed my mom around the kitchen. My mom unfortunately fell ill and I wound up cooking for my three younger siblings. I was kind of good at it. So that kind of gave me confidence. They were my first customers.

Q: What do you enjoy about cooking?

A: I really like the way it brings people together. Speaking personally from doing it at home I always love how it brings people together for birthdays and holidays and talking about your day over food and all of that. To switch gears and do it on a professional level it's kind of the same thing. You build these relationships with your customers that follow you through. I just got a delivery from a guy who when he was 5 years old used to come into Cafe Reva for pancakes.

Q: How long have you been a chef?

How to become a chef

Job description: Chefs are culinary professionals that are trained in all aspects of food preparation. Their main responsibilities include planning menus, overseeing the kitchen staff, and ensuring that the food meets high-quality standards. Similar positions include executive chefs, pastry chefs and sous chefs.

Workplace: Chefs usually work at restaurants, but can also work for households or at private facilities.

Skills/qualifications: Managing a team of cooks, organization, time management, attention to detail, ability to work under extreme pressure, effective communication skills in a fast-paced environment, and the ability to make good food consistently in a busy kitchen.

Salary expectations: Chefs make an average salary of $17.67 per hour in the United States, according to Indeed.com. Pay rates vary depending on level of experience, education and geographical location.

Education/training requirements: Culinary degrees and/or management programs. Chefs normally don't receive on-the-job training because it's expected that they will have had previous experience as a cook before taking on the increased responsibilities of being a chef.

Experience: Typically five years as a cooking professional or more, although exceptions can be made depending on the type of previous experience or a candidate's educational background. Chefs typically gain real-world experience by serving in other cooking positions or in junior-level roles.

A: I wouldn't call myself a chef the first 10 years that I was in the business. I think after 10 years in the business and running a couple of my own kitchens I gave myself the title of chef. It's a title that people use a little loosely, and I think that it's something you do have to earn. All chefs can cook, but not all cooks are chefs. I think that's fair to say because sometimes the food is like almost the last thing you get to do, you know? Like I'll have a day planned out ... and then you wake up to someone not coming in or you come in and for some reason the water pipe burst. Once in awhile your day goes like it's planned.

Q: How did you end up attending Le Cordon Bleu?

A: I worked overseas in Israel for while after graduating from the Culinary Institute [of America]. It had always been a dream of mine to go and live in Paris, but I had to have something to do there, because they don't just let you go there and bum around. You could do a Euro pass and adventure through Europe but I just kind of wanted to immerse myself in the culture, just kind of feel what it's like to be an American in Paris. I felt that in this school it would be plausible for me to come and do that. Culinary-wise it was a dream come true. I traveled a lot when I was over there and learned and saw things that I would have never experienced here in the states, and it's given me a greater appreciation of everything.

Q: What did you learn during your year in France?

A: The French are so stringent on just the base of cooking. They teach you all of the cuts, and the practicals and the stocks and the mother sauces, really the importance of a base thing. From that you have many derivatives. From that aspect sometimes I'll make dough and I can make four of five things out of it. That kind of thing is what I learned from being in France. ... Utilization, getting the most out of a product. And also, just being so respectful of the food. They're very respectful of the food.

Q: Why did you go to the Culinary Institute?

A: I had finished high school and I had the opportunity to go there with a reduction of cost. That's not why I ended up going but it made it a little bit easier to say yes to. It was amazing. ... Le Cordon Bleu was strictly cuisine whereas at the Culinary Institute you didn't actually even go into a kitchen for months. You were learning about wine and how to run a restaurant. They were really teaching you to be more well rounded.

Q: What did you take from these two schools that you've used in your career?

A: So many different things. I could probably look at something that I've never cooked but because I know what its makeup is I would know how to cook it. It's given me such a great rounded experience, really, because I know a lot about a little and a little about a lot. I could go into any restaurant and do any of the positions. That right there, that's the definition of a chef. You can go into a cooking business of any kind and in a day or two be able to run the show because you're doing everything.

Q: How did you meet and get to work with Julia Child?

A: I was in Paris. It was her 83rd birthday. A chef asked me if I would like to volunteer to cook for Julia Child and then I would get to be on TV on Good Morning America, which would be filmed in France the next morning. I just looked at him and said is that a trick question? So we cooked for her birthday celebration. We all got to meet her and get our pictures taken with her. She was such a gracious woman, really. Smiling and laughing and just happy to be standing in Le Cordon Bleu.

She has also been an inspiration, coming full circle, because I used to watch her show, too, when I was much younger, on PBS. I just loved that she was OK with just dropping something on the floor and just dusting it up. Not that I do that or anything, but it was just so natural. You know that if you're cooking a steak at home and drop it on the floor you probably wouldn't throw it in the garbage. She just let you know that that was OK. That's another thing that you have to be as a chef. You have to improvise. Sometimes when you're out of something you have to use this or that.

Q: Cafe Reva, which featured gourmet-caliber meals in a diner-style atmosphere,  was a very popular spot. You had to close in 2013 because your landlord wouldn't help pay to bring the restaurant's equipment up to code. Do you think you'll ever open another Cafe Reva someday?

A: I get asked that a lot. The time that I ran Cafe Reva was such a special time — it really, really was. Little old banged up cafe on Tyler Street, right?  I'll never forget it. But I think that was that time, and now will be other things. Something really crazy would have to happen for me to do that.

Q: What advice would you give to someone who wanted to be a chef?

A: If your passion for food is what drives you, then I would highly recommend being a chef and pursuing that dream. But understand also that when you're doing that you're working weekends, long hours, nights, missing people's birthdays. There is that side of that. In my 20s and 30s, I did miss some things.

If you're considering being a chef you have to have a tough skin, perserverance and passion, in whatever order you want to pick.