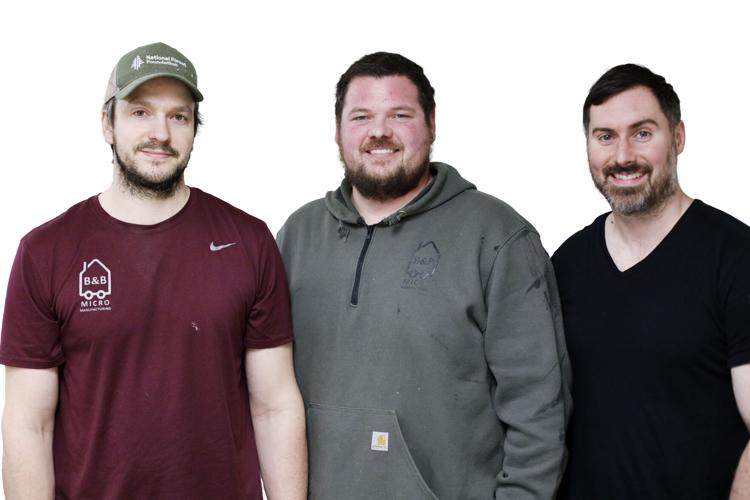 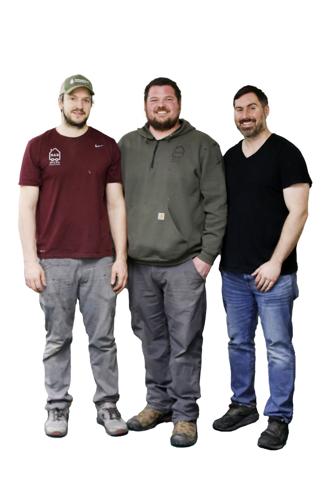 ADAMS — They grew up together in the same town, attended the same schools, and also worked together for one of their fathers.

It goes without saying that Mitch Bresett, Chris St. Cyr and Jason Koperniak, who are all from Adams, know each other well. They know each so well that they also decided to go into business together in 2015. St. Cyr and Koperniak, who had originally left Adams to pursue careers in finance working in the stock exchange, returned home full time to team up with Bresett, who had decided to restart the family's home building company after his father died.

The three men are all partners in B&B Micro Manufacturing of Adams, which makes custom, and pre-built tiny houses, small living units on wheels that are made primarily for companies in the hospitality industry. B&B started in a three-car garage in Adams, moved to the Windsor Mill in North Adams in 2017, then came back to Adams in 2019 to occupy the former Brown Packaging building on Howland Avenue after receiving a tax incentive package from the town.

A three-way partnership is not unusual in the business world, but it's not the norm either. Especially the way these guys do it. There are no management titles at B&B. No CEO, no CFO, no COO.

How do they do it?

"We couldn't be more alike, but totally different," Koperniak said.

Here's what they told us about their company.

Q: How long have you guys known each other?

Jason: Oh gosh, preschool. Chris and I actually met in preschool and Mitch's sister went to school with us. (St. Cyr is 35, Koperniak 34 and Bresett 30.)

Q: How did you and Chris meet Mitch?

Jason: We went to school with his sister and we worked for Mitch's father.

Q: Why did you guys go into business together?

Q: Why did you choose to build tiny houses?

Jason: We had one client that was shipping tiny houses up from Florida and we felt that we could provide a a higher quality product for cheaper.

Q: A lot of times when young people leave the Berkshires they never came back. But Jason and Chris you didn't. Why did you come back?

Jason: Well, we had this company that at the time was building a few tiny houses and eventually it just grew to where just having Mitch here wasn't going to cut it.

Chris: The finance world was changing and this particular project was accelerating. Finance was getting harder and this was gaining traction.

Mitch: They were still doing back end office stuff remote [while living out of the Berkshires]. I can't say that I lit the fire by myself.

Q: What's it like working and running the company together?

Mitch: Not a lot of fights. We seem to get along. I try and delegate some of my workloads on to them. If I tell them to lock in a product that's pretty much the end of the conversation and it's done. It really cuts out, "Well, you said you were going to do this." If we say it, we do it.

Q: Do you think you work well together because you've known each other so long?

Jason: It helps. Definitely, it helps.

Chris: Just different skill sets. If we were the same we'd fight a lot more, I'm sure.

Jason: It's clear that it's in the three-headed approach where our confidence in certain skills excels. So what Mitch lacks, Chris brings and what Chris lacks I bring and vice versa. There is a lot of overlap but we are all very much skilled in our particular line of the business.

Q: What are your specialties within the business?

Jason: I'm more business development, the meet and greet and that line. Mitch has obviously been in the trades, and Chris hybrids between the skill trades, and his finance background and procurement and the accounting stuff.

Q: How has your business changed since you moved back to Adams from the Windsor Mill?

Mitch: We've doubled our space, but tripled our production. This is better workflow. We're doing efficiencies because of the system that we were able to implement in this facility that we weren't able to do in the Windsor Mill. With more space we're able to sell more goods.

Q: In the shop I noticed that you are working on several units at once. How do you approach your work?

Jason: It's just streamlined production. We're able to have 11 units going at once, depending on how we want to approach the particular build.

Q: How does building a tiny home differ from building a regular home?

Mitch: If you're building a residential home your goal is to make your structure weather-tight almost as quickly as possible. We're out of the elements here (B&B makes all its structures inside its facility) so we have some flexibility in, say, when the roof goes up. We don't need it to go up before the interior's done because it doesn't matter. Other than that you can pretty much substitute the trailer were using for a concrete foundation and the rest is the same.

Q: How long does it take to build a tiny house?

0Chris: It takes eight days to build one of these.

Q: How does it compare to building a regular house?

Mitch: If you get it in four months you're doing pretty well.

Q: Who is your typical customer?

Jason: It's hospitality companies. We don't build them for anyone who lives in them full time.

Q: So a hotel or resort would buy these and put them on their property?

Q: Home builders have really been affected by supply chain disruptions since COVID began. How about you?

Jason: Chris has navigated the supply chain very effectively, which who is why our business has continued to thrive, because if you don't have the materials you can't assemble them.

Q: How have you done that, Chris?

Chris: I wouldn't say we totally effectually did it. We still struggle with some things, like windows. We were getting them in four weeks and that turned into 14 or 15 weeks. And then you've got to get creative. Mitch will figure out a way that we can finish a house with no windows, put it outside, and then bring it back in, that kind of stuff, so we didn't have to totally shut down the shop. Otherwise, we would have been dead in the water.

And the rest of it, we were in a lucky enough position that we had enough orders that with future orders we could take risks ordering very large quantities of things that we saw as future problems or future risks. Maybe we didn't need to order all of it but we tried to order as much as we could that we predicted would get bad, those things that would stop you from finishing a house.

Q: Where do you see B&B Micro Manufacturing five years from now?

Jason: Our intent is to keep a healthy company. It's supply and demand and right now demand is exceeding supply and it's benefited us greatly. We'll take it one day at a time and plan for the best.

Founded: 2015 (Mitch Bresett's father originally started a home building company in 1987 that his son revived seven years ago after his father died.)