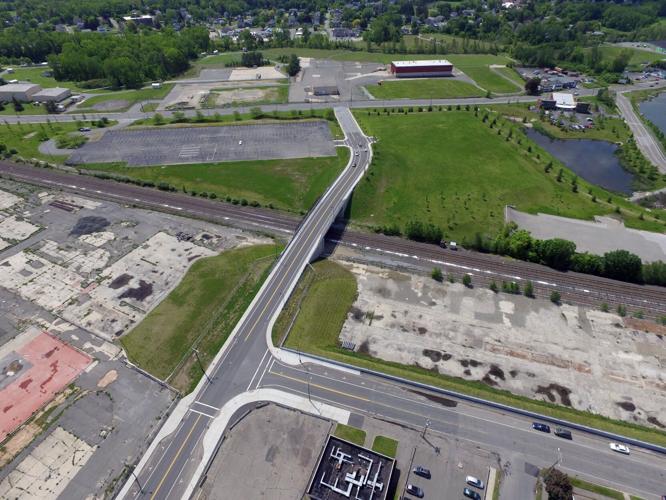 This view of the William Stanley Business Park shows the 16.5-acre Site 9 just to the north of Woodlawn Avenue in Pittsfield. Interest from a prospective tenant has the Pittsfield Economic Development Authority considering the construction of a tunnel under Woodlawn Avenue that would link Site 9 with Site 8, right, on the south side of Woodlawn. 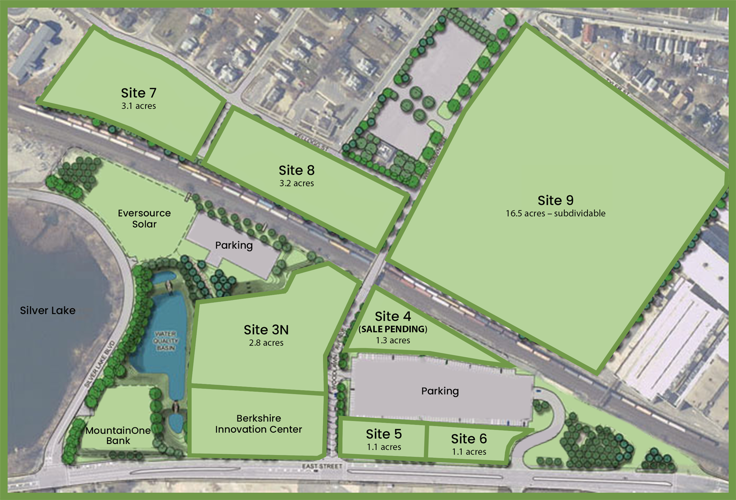 Pittsfield Economic Development Authority officials are in discussions with a prospective tenant for Sites 8 and 9 in the William Stanley Business Park. A tunnel under Woodlawn Avenue would offer easy access between the sites.

PITTSFIELD — Interest from a new prospective tenant has the Pittsfield Economic Development Authority considering the construction of a tunnel to link two building sites at the William Stanley Business Park.

The tunnel would run under Woodlawn Avenue, the main north-south thoroughfare in the 52-acre business park, and would link building Sites 8 and 9, which are located on opposite sides of the roadway, said PEDA Executive Director Michael Coakley.

Construction was thrown a curveball last year. But, Berkshires’ progress is on ‘state’s radar.'

The prospective tenant is a national company that is interested in finding a site for a production and distribution center for its New England operations, Coakley said. He declined to name the company because of the ongoing negotiations but said PEDA and the city of Pittsfield hope to have a final answer from the company soon.

“They’re looking at a number of different sites throughout New England, and PEDA is one of the sites they’ve looked at,” he said.

He said the prospective tenant also is interested in developing building Site 7, which abuts the western edge of Site 8 but is located on the same side of Woodlawn Avenue.

“If they come here, they will need to move product back and forth between Sites 8 and 9,” Coakley said, “and they don’t want to drive over Woodlawn to do it.”

PEDA, the quasi-public agency tasked with the business park’s development, has considered other options for linking the two sites, including one that involved a link to the CSX railroad tracks that cross the park south of building Sites 7, 8 and 9 and are located below Kellogg Street. To explore the tunnel option in more detail, PEDA hired SLR Consulting of Connecticut to conduct a feasibility study.

SLR’s Manager of Landscape Architecture Mark Arigoni told the PEDA board at a recent meeting that a prospective tunnel would be capped at a height of 15 feet so that it wouldn’t affect Woodlawn Avenue above it. That height would accommodate tractor-trailers, which typically are about 13.5 feet high.

Uninterrupted north-south access through the park on Woodlawn Avenue was unavailable for a decade, until a new bridge over the railroad tracks opened in 2016.

SLR has been conducting work on building Site 9 for PEDA and the city of Pittsfield in connection with the $1.1 million in state money that the city received in March to prepare that parcel for development. At 16.5 acres, that tract, which borders on Tyler Street and Woodlawn Avenue at the park’s north end, is the largest of the business park’s nine building lots.

The feasibility study was paid for through the money that the city previously had received from the state, Coakley said. A site plan for building Site 9 was developed last year. The combined size of Sites 7, 8 and 9 is slightly less than 23 acres.

Development has been proposed at Site 9 before. From 2011 to 2016, a Boston-area company tried unsuccessfully three times to develop that parcel, including the construction of a $30 million Walmart Supercenter, before pulling its plans for good in 2017.

The business park is located on the site of General Electric’s former power transformer facility, and Coakley said GE also once operated a tunnel under Woodlawn Avenue.

“It’s pretty close,” Coakley said, comparing the location of the two tunnels. “But, I think they filled it all in. It would have to be totally redone.”

If the prospective tenant decides not to come to Pittsfield, Coakley said, a tunnel still could be built under the roadway.

“I’m not saying we would build it anyway,” he said. “I’m saying it’s feasible if another company would use it.”

The Pittsfield Economic Development Authority is reapplying for a grant that it did not receive last year to provide additional money to move along the development of the William Stanley Business Park's largest building lot.