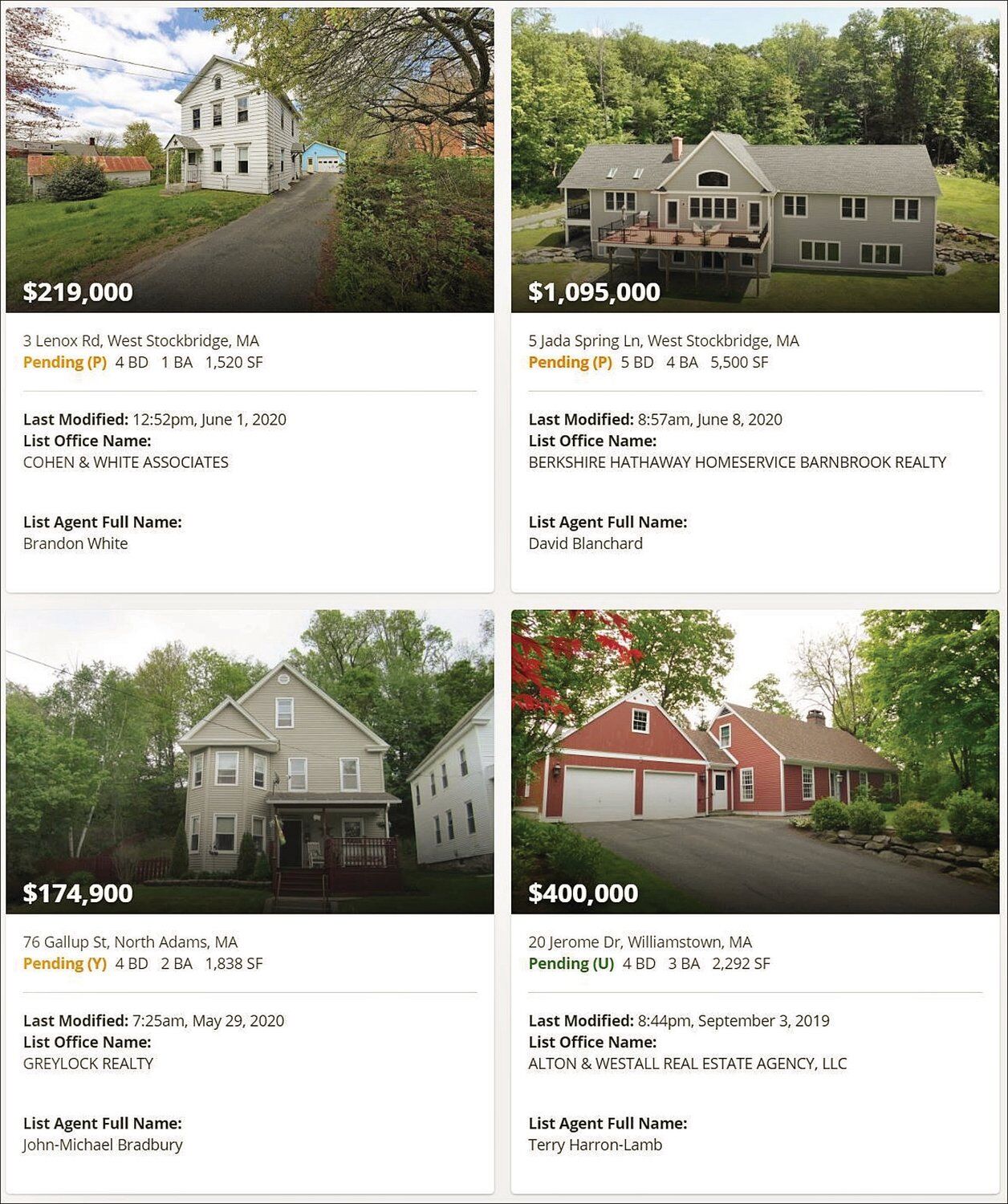 An array of homes is seen as of June on the Berkshire County Board of Realtors' Multiple Listing Service. 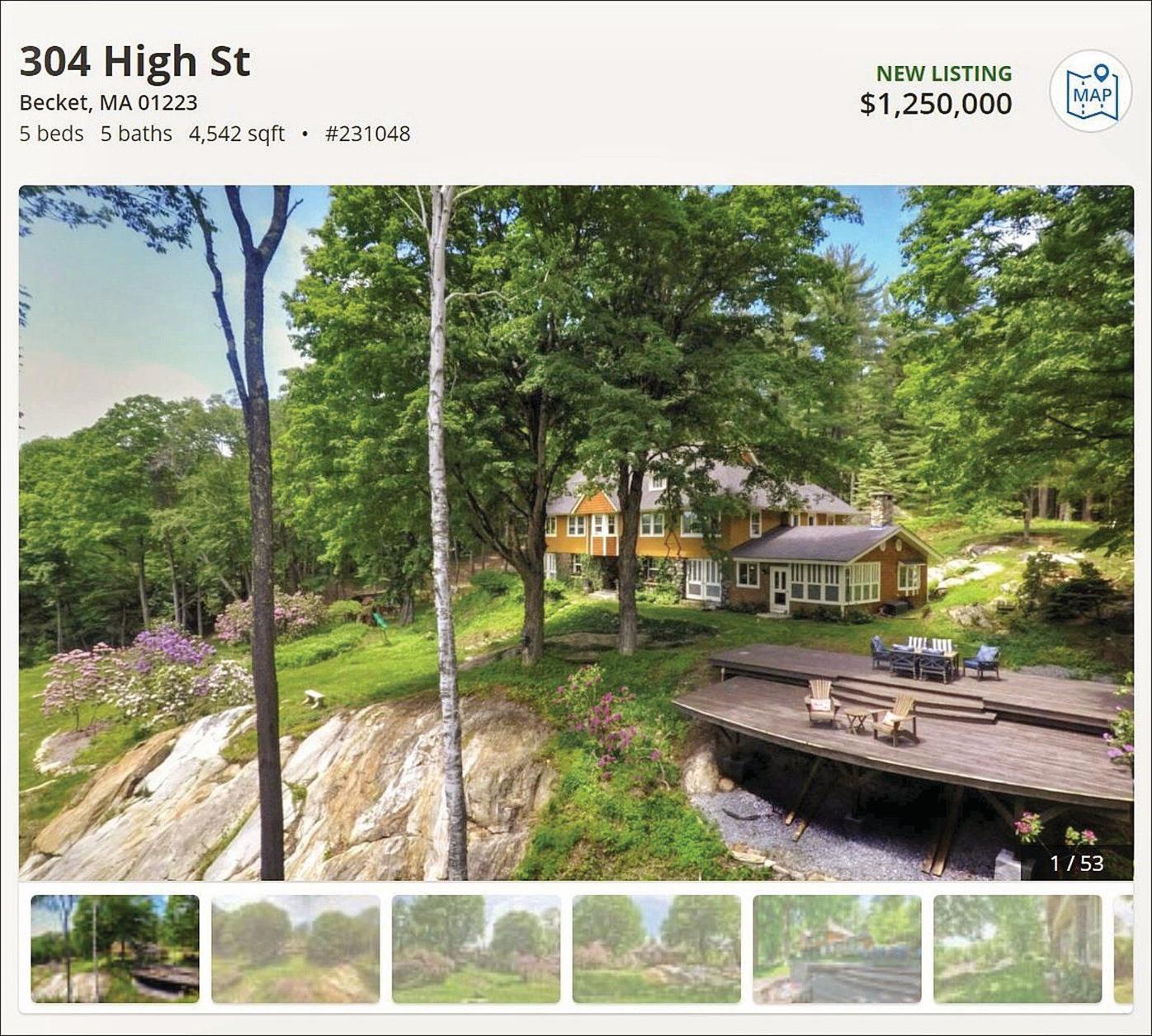 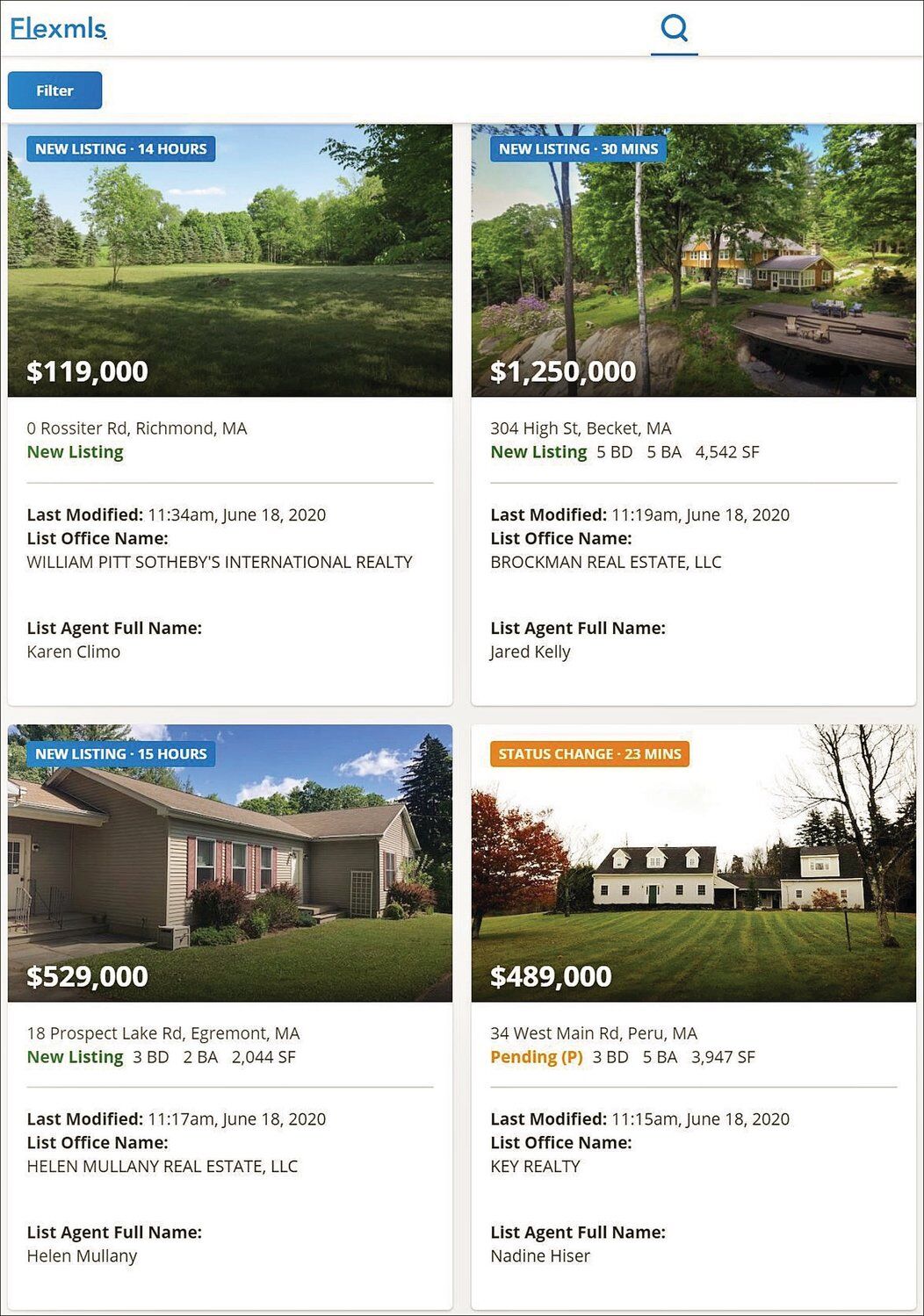 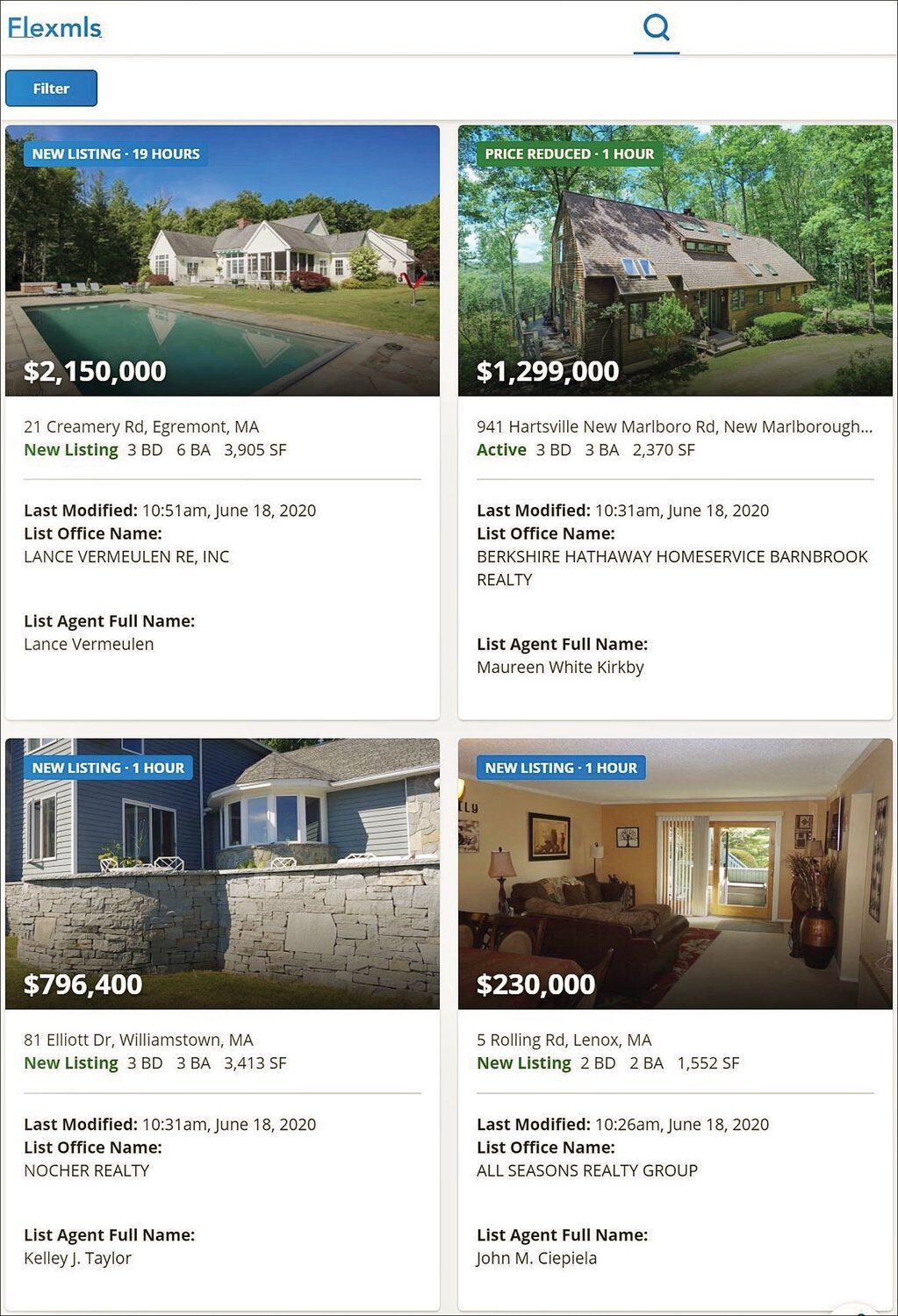 An array of homes is seen as of June on the Berkshire County Board of Realtors' Multiple Listing Service.

WEST STOCKBRIDGE — Like most local real estate agencies, Stone House Properties closed its offices in mid-March due to the COVID-19 pandemic. But, business didn't drop off for long.

"We had about 10 days where it was kind of quiet and then it just started ramping up," said Stone House Real Estate broker Suzanne Crerar. "By the end of March, everybody started to get really busy and it's been nonstop ever since."

Reasons abound for the uptick in sales, according to those in Berkshire County's real estate industry. They range from people buying homes from outside the Berkshires, mainly from the New York City area, to escape from denser urban areas that have been affected by the COVID-19 virus to historically low interest rates to the increased availability of reliable fiber-optic technology that has made it easier and more efficient for people to work remotely from the Berkshires.

At Greylock Federal Credit Union, mortgage activity in May increased $15 million from the same month last year, according to president and CEO John Bissell. During the three months that the COVID-19 pandemic has affected the market, Greylock's real estate volume has increased by as much as 325 percent, Bissell said.

Despite a shortage of inventory, pending sales of single-family homes in the Berkshires at the end of May were up 28 percent from last year, with 187 homes under agreement, compared with 146 at this time in 2019, according to the Berkshire County Board of Realtors. Only 734 residential homes were on the market at the end of May, compared with 1,122 at this time last year.

"We have the buyers and the demand," according to market analysis provided by the Berkshire County Board of Realtors. "We just need the homes to sell."

The COVID-19 pandemic has played a role in the surge, real estate agents say.

"I think the markets are crazy for a few reasons right now," said Eric Steuernagle, the president of the Berkshire County Board of Realtors and who owns Fairground Real Estate in Great Barrington. "The spread of the coronavirus in heavily populated areas like New York City in confined areas of space has people looking to kind of spread out a little bit."

"We're getting a lot of outside buyers from New York, Connecticut, Florida and Texas," said Jason Nocher, the broker/owner of Nocher Realty in Pittsfield and Adams.

And, many of these out-of-the-area buyers are seeking primary residences in the Berkshires, not second homes.

"I have doctors living in Manhattan who don't want to live in the city," Nocher said. "They can do everything now remotely at their kitchen table."

A primary selling point, particularly in South County, has been homes that have reliable access to broadband technology.

"That's one of the most important questions that we get," Steuernagle said. "It's location and, usually, the second or third question is internet availability. ... Even if it's a good house with perfect amenities, if there's no high-speed internet, people are walking away. It's also becoming a staple in our listings and our write-ups."

"If you don't have high-speed internet, you're not selling in that area," Nocher said.

Mary Jane White, the owner of Cohen & White Associates in Lenox, said her agency has sold a home to someone from as far away as Idaho. Since the pandemic hit, White said, families in all age groups are looking for homes.

"I think the story since the pandemic hit is that it's been all about family in the Berkshires, at all different ages and stages," she said. "For instance, if the grandparents had a weekend place here, the younger generations are coming and sheltering in place with them. Everybody's learned that you can work remotely, which is an issue in some South County towns.

The activity "is in all price ranges," she said. "We are seeing first-time homebuyers. The good news is, we are seeing young families with children moving here that have been able to work remotely and they want to stay and put their children in school here. We've seen for the first time in a long time people looking at land, which is great for the tradespeople in our area."

Because people have learned that they successfully can work remotely from the Berkshires now, they are more eager to move.

"If people before were waiting two years to move to the Berkshires, they're doing that now instead of waiting because they [have learned] they can work remotely for the next one, two, three, four or five years," White said.

"It's all about families wanting to be together. We're seeing family members coming into the area where their parents and grandparents live. And we're seeing some seniors moving out of the area to be closer to their children."

Low interest rates are attracting homebuyers. Nationally, the 30-year fixed-rate mortgage averaged 3.13 percent for the week ending June 18, the lowest rate in the history of Freddie Mac's Primary Mortgage Market Survey, which began in 1971. Last year at this time, the 30-year fixed rate was 3.84 percent.

"Purchase demand activity is up over 20 percent from a year ago, the highest since January 2009," Sam Khater, Freddie Mac's chief economist, said in a statement. "Mortgage rates have hit another record low due to declining inflationary pressures, putting many homebuyers in the buying mood."

At Lee Bank, Leach said the mortgage department has been working seven days a week — "full days" — and that "we're completely maxed out"

"I've been here five years, and it's just as busy as it's ever been since I got here," Leach said. "As a point of comparison, at this time in 2019 and this time in 2018, our pipeline is five times those two years."

At Greylock, Bissell said, "Our mortgage volume has been extremely busy." A number of Greylock members are refinancing their mortgages.

"Our strongest activity tends to be more local borrowers, but we're here for everyone," he said.

The market in Pittsfield has been "brisk," according to Crerar.

With the coronavirus, "there was a lot of uncertainty, and people didn't even want to put their home on the market during the first part of it," said real estate agent Mark McIlquham, the co-owner of Realty Street in Dalton. "Then they were putting them on the market and things were moving. The catalyst was the low interest rates and also the idea that the world wasn't coming to an end. So, people decided to move on. The low supply and high demand obviously had an effect on prices."

The low interest rates also have led to a surge in the number of first-time homebuyers.

"People are moving out of rentals and into primary homes now," White said. "It's a good time to be a seller right now. There's some amazing activity."

Despite the initial disruptions that the pandemic caused on the Berkshire real estate market, year-to-date residential sales are down only 8 percent from last year, and the sold dollar volume is basically the same as it was in 2019, "hovering" at $120 million from January to May, according to statistics supplied by the Berkshire County Board of Realtors.

From January to May, total residential sales were down by 16 in Central Berkshire from last year but were up by one in Northern Berkshire, and at the same level as last year in South County. The average sales price for the first five months of 2020 has increased 5 percent, from $272,1117 last year to $296,879.

The year also started well, with first-quarter sales up 17 percent from last year and the dollar volume up more than 40 percent, from $52 million during the first quarter of 2019 to $73 million this year.

But, sales retracted when the quarantine went into effect in mid-March. With new guidelines in place, sales began to rise minimally in April, although they were down 30 percent from the same month last year. Then things began to change again.

"Right now, from what I'm hearing on the streets, multiple offers on houses are going on the market on the same day," Steuernagle said. "It's red hot right now."

"It's pretty active," said Tom Martin, a real estate attorney for the Pittsfield law firm of Martin & Oliveira. "We do North County, Middle Berkshire and South County, and we're seeing a lot of deals. From what we're hearing from Realtors, there's not a lot of inventory. But, when something comes on the market, it moves really quickly with a lot of offers."

Homes located in desirable areas are the ones receiving the largest amount of offers.

"I think it depends on where the home is located and the price point," Martin said. "Houses in the right locations are only staying on the market for a week at the most."

"Things are literally selling the day they hit the market with five to seven offers," Nocher said.

Home sales have gone so well that, Martin said, "in the last few weeks, it's feeling more and more like the summer season again."

Although some high-end home sales in the Berkshires have occurred this year — Underledge, an 1883 Queen Anne style "cottage" on Cliffwood Street in Lenox, was sold for $3.6 million to a New York City couple in April — the most popular market for countywide single-family home sales from January to May has been in the $100,000 to $250,000 range

In those price brackets, 105 pending sales were listed in May, compared with 96 last May. A total of 118 single-family home sales have occurred in the $150,000 to $200,000 price range from January to May this year, according to the Board of Realtors.

"I think we have nothing to slow it down," Steuernagle said. "It's low inventory, high demand with historically low interest rates. ... It's kind of a perfect storm."