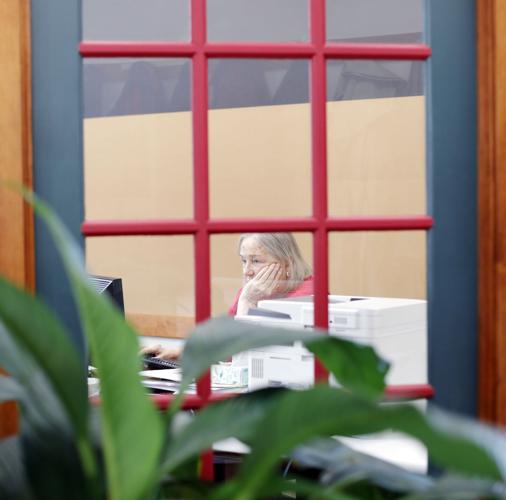 MOLARI Employment and Healthcare Services' resident and CEO, Gail Molari, works in her office at the company’s headquarters in Pittsfield. “Everybody needs people,” she said. 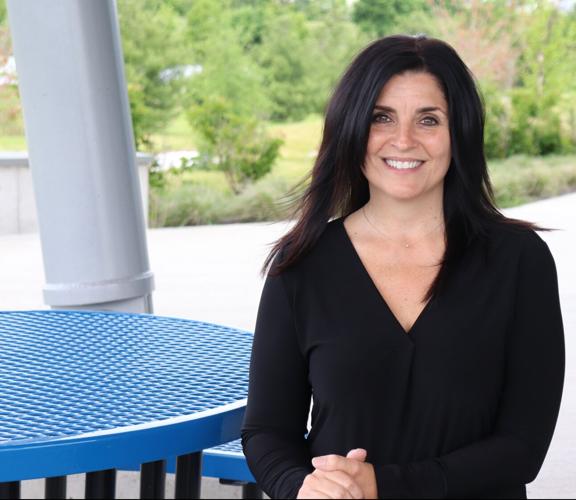 Tami Emery Sime, owner and CEO of TEC Staffing Services in Pittsfield, says the coronavirus pandemic has changed attitudes about work. “People have done some reconfiguring of their lives,” she said. 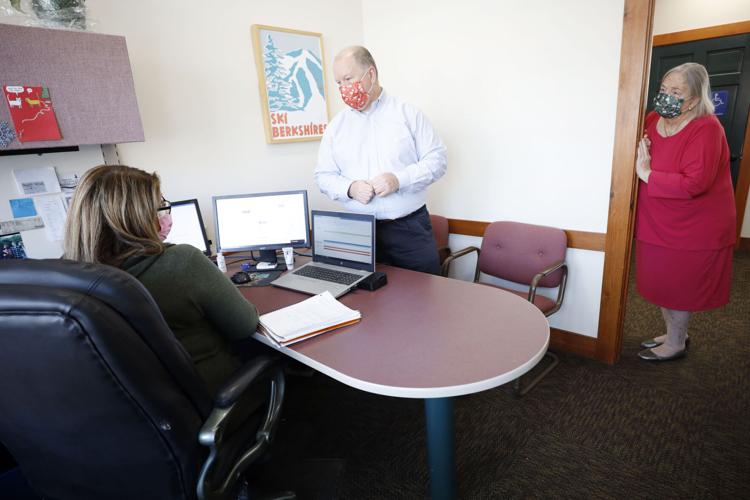 PITTSFIELD — On Friday, TEC Staffing Services in Pittsfield was close to getting a “yes” from a candidate it wants to place into a permanent job.

As has become more common in a tight Berkshire labor market, employers are fighting to retain valued workers.

“Everybody needs people. They check in with us to see if someone has magically appeared.”

Tami Emery Sime, TEC’s CEO, told me the candidate’s current boss was making a counteroffer, not sitting still. “They’re rolling out a benefit package today and then she’ll decide. It’s happening more now because of the pandemic.”

In a tight labor market, good workers are in a good position.

“Candidates are sweetening the pot for themselves at their current job because their companies don’t want to let them go,” Sime said. That’s just one of the things local temp agencies like hers are seeing these days, from their perch at the corner of Supply and Demand.

Staffing agencies occupy a front-row seat to what’s going on. They sit, as brokers, between the region’s many job openings and today’s surprisingly shallow candidate pool.

At MOLARI Employment and Healthcare Services, the staff is even hearing from companies that typically handle their own recruiting and hiring.

“Everybody needs people,” Gail Molari, MOLARI’s president and CEO, told me last week. “They check in with us to see if someone has magically appeared.”

When I checked in with these two agencies, I had a list of questions at the heart of The Eagle’s Project Paycheck.

How does the local labor market look from where they sit? What jobs are most in demand? What makes candidates tick these days?

Also: Is there something about Berkshire County that complicates recruiting? Are employers getting the message on pay? Do signing bonuses work?

They had a lot to say. To speed things up, I’ll hit each of them by topic — then wrap up this dispatch with another case of a high-paying job ($40 an hour!) that has been hard to fill.

LABOR MARKET FROM 30,000 FEET: When I asked Guin Griswold of MOLARI and her boss, Gail, to name jobs most in demand, they laughed.

“You name it and we’re heard from them,” said Griswold, MOLARI’s client services manager. Certified nursing assistants might top the list, though. “We’re not able to fill the majority of those,” Griswold said. “Those folks just aren’t out there.”

Also scarce these days: Drivers with CDL licenses and people to run box trucks around on deliveries. Why so short? The pay just isn’t good enough.

MOLARI used to muster up candidates easily for jobs in building maintenance and custodial work, but not today. That’s true as well for that work in resorts, hotels, inns, condo associations and apartment complexes.

Sime, of TEC Staffing Services, agrees that relatively low pay is partly to blame for the trouble finding drivers. As older drivers leave the workforce, they aren’t being replaced. That goes for the trades in general.

Another then vs. now: Companies that need painters are using employment agencies. It used to be easy to find painters on their own.

WHAT WORKERS ARE THINKING: Actually, that heading should be this: Workers are thinking. Or, rethinking. We’re heard that from experts in earlier dispatches.

Heather Boulger, of the MassHire Berkshire Workforce Board, told us companies are wise to revise job descriptions, shaping jobs with more appeal and flexibility, where possible.

“That’s what potential employees are looking for,” she told me last month. “Things on their terms.” We also spoke, for our first story, with Jonathan Butler, of 1Berkshire. Butler said the coronavirus pandemic is driving a shift in attitudes. “People are thinking differently about what work means for them,” he said.

The folks at the temp agencies are seeing it, too.

“There’s just been a complete reassessment that people have made in the work-life balance,” Griswold said. She thinks that’s true for people at all income levels now, not just those in higher-paid jobs, as had been the case. “A reprioritization of life, I guess.”

Day to day, she has seen that carry over to attitudes about what employers have the right to expect. She has been surprised by that — by people who want their workplaces to let them miss work for appointments. “It’s all about what they need and want to do, and not the employer,” Griswold said of some candidates she has met.

Sime, of TEC, agrees about the rethinking going on.

“People have done some reconfiguring of their lives,” she said. Some have cut household costs in order to work less, to feel less stress. And they’re looking harder at how they should be compensated, in the broadest sense.

“What they really want now is better benefits,” she said. That means more vacation and more appealing health insurance, for starters.

Meantime, Sime has noticed that people are more likely to stay with jobs they hold, a stance that yields fewer candidates for employment agencies.

“It’s the risk of the unknown, given that we’re still in a pandemic,” she said. “You have a lot of people staying put where they are.”

IS THERE SOMETHING ABOUT BERKSHIRE COUNTY THAT COMPLICATES RECRUITING? Yes. It’s called geography, as far as Sime sees it.

“The size of the county is a factor. We’re like a fishbowl. It’s not like we have surrounding areas where we can draw from the workforce. The people who work here live here.”

ARE EMPLOYERS GETTING THE MESSAGE ON PAY? Perhaps, these folks say.

“A lot of companies, quite honestly, are receptive to that,” Sime said. “Part of it is that the wages have to come up.”

The other day, a client called her about a job paying $15 an hour. Sime says she made it plain: They wouldn’t be able to fill that job at that pay. “They can go work at three other companies and make $17 an hour,” she said of candidates. “If you want to find the best pool of workers, you have to raise the wage. We’re trying to be very realistic with them.”

Griswold says she encourages companies not to lowball the hourly rate.

“Candidates can hold out for higher wages,” she said. “I think higher wages are here to stay. How do you backpedal now?”

By the way, the current minimum hourly wage in Massachusetts, $13.50, goes to $14.25 on Jan. 1. Companies that think they’re role models by stretching to pay $15, Griswold notes, are barely above minimum.

What’s your work-life story of 2021? Please take our Project Paycheck survey. You also can offer suggestions and share thoughts by contacting the project’s lead writer, Larry Parnass, by emailing him at lparnass@berkshireeagle.com, or by calling him at 413-588-8341.

DO SIGNING BONUSES WORK? Iffy. The amounts offered might not be enough, these experts say. And people catch on quickly that the bonuses come with fine print about when they’re paid. (Hint: Not always upon signing.)

Griswold, of MOLARI, said the size of bonuses offered on road signs around the Berkshires isn’t big enough to change the game for people rethinking that work-life balance.

Molari started her agency in 1983. By my count, she has steered it through four recessions, including the COVID-19 downturn. She has seen a lot of ups and downs in the economy. That long view lends perspective. It tests whether we occupy a novel time.

And yet, Molari and Griswold say they see jobs go begging in the Berkshires that candidates would have once chased hard, like a part-time post at Berkshire Health Systems for a human resources information systems analyst that pays around $40 an hour; the job is for six months, 24 hours a week.

“It’s unusual to have something that pays at that level that has that kind of flexibility,” Griswold told me. True, the fact that it’s temporary might not be enough to attract a candidate from a similar local position, or from outside the area.

But, Griswold and Molari say the person hired for the temporary job has time to show their skills, and make inroads for future work with BHS. “It leaves you speechless when you see some of these things,” she said.

The years the music died. A Berkshire songwriter’s pandemic lament

PROJECT PAYCHECK: Unlike some in the “great resignation,” singer-songwriter Bernice Lewis isn’t walking away from a career. She’d gladly run right back to the music business that’s been her life going on four decades, if it was still there.

PROJECT PAYCHECK: Child care centers in the Berkshires are fighting to hold it together, one positive COVID-19 test and one teacher resignation after another. By all accounts, the pandemic has steamrolled a stressed early-education system in Massachusetts. “It’s been difficult not being able to work because I can’t find child care for my daughter," said one Berkshire County mother. She's not alone.

PROJECT PAYCHECK: Lenox is an “economically distressed” community. So is nearby Hinsdale, and even Becket. How these three relatively affluent Berkshire County towns got that designation – earning them a splash of red on a map – will be one of the pandemic’s weirdest footnotes.

As the pandemic recession eases, a mystery remains. Where are the Berkshires’ missing 2,000 workers?

Q&A: 11 questions for Heather Boulger, a workforce expert, on why the jobs recovery has stalled.