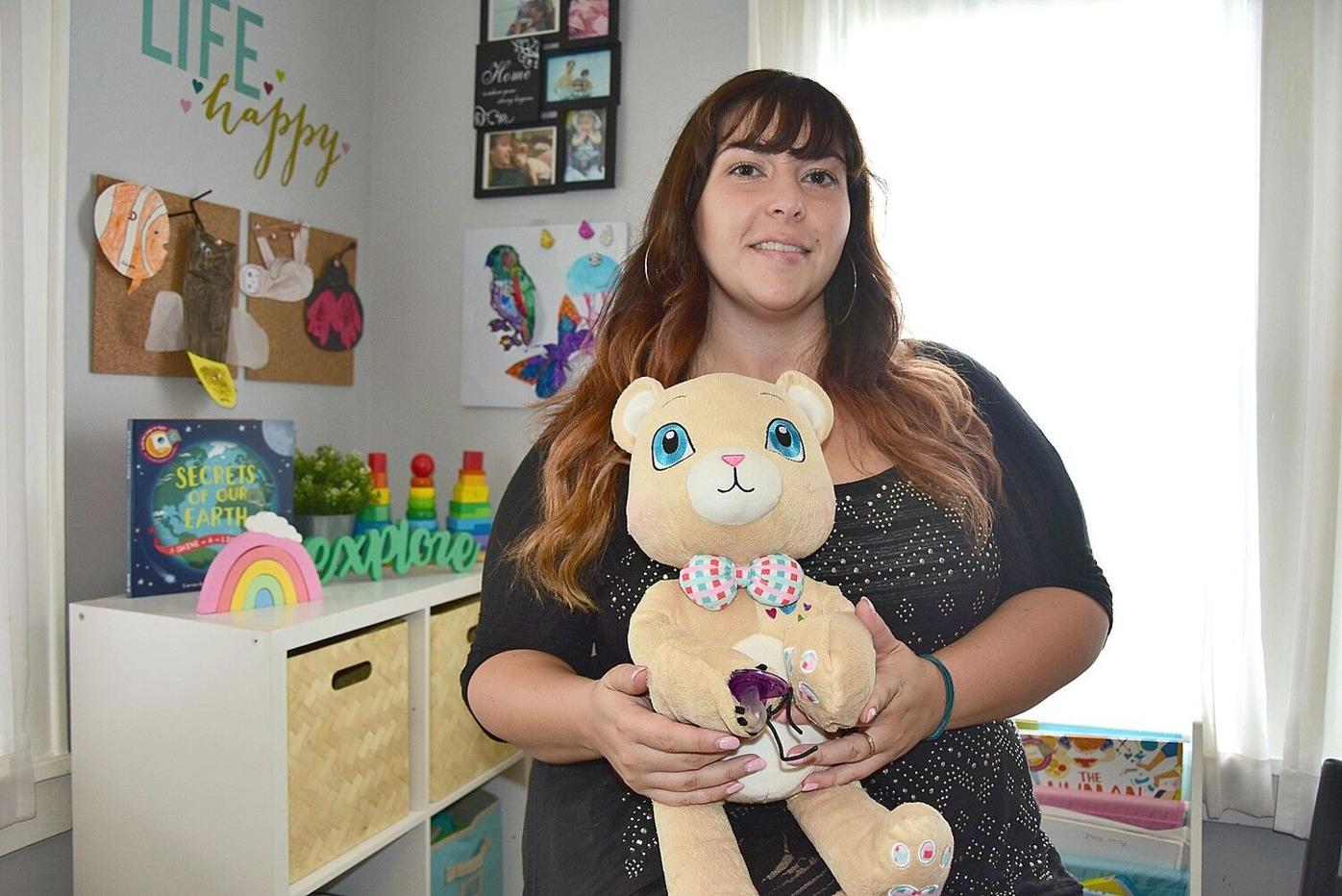 Kaitlyn Pierce holds "Binka Bear", a project she developed as way to wean young children from their pacifiers. She used an online funding platform to raise the funds she needd to bring the project to development. 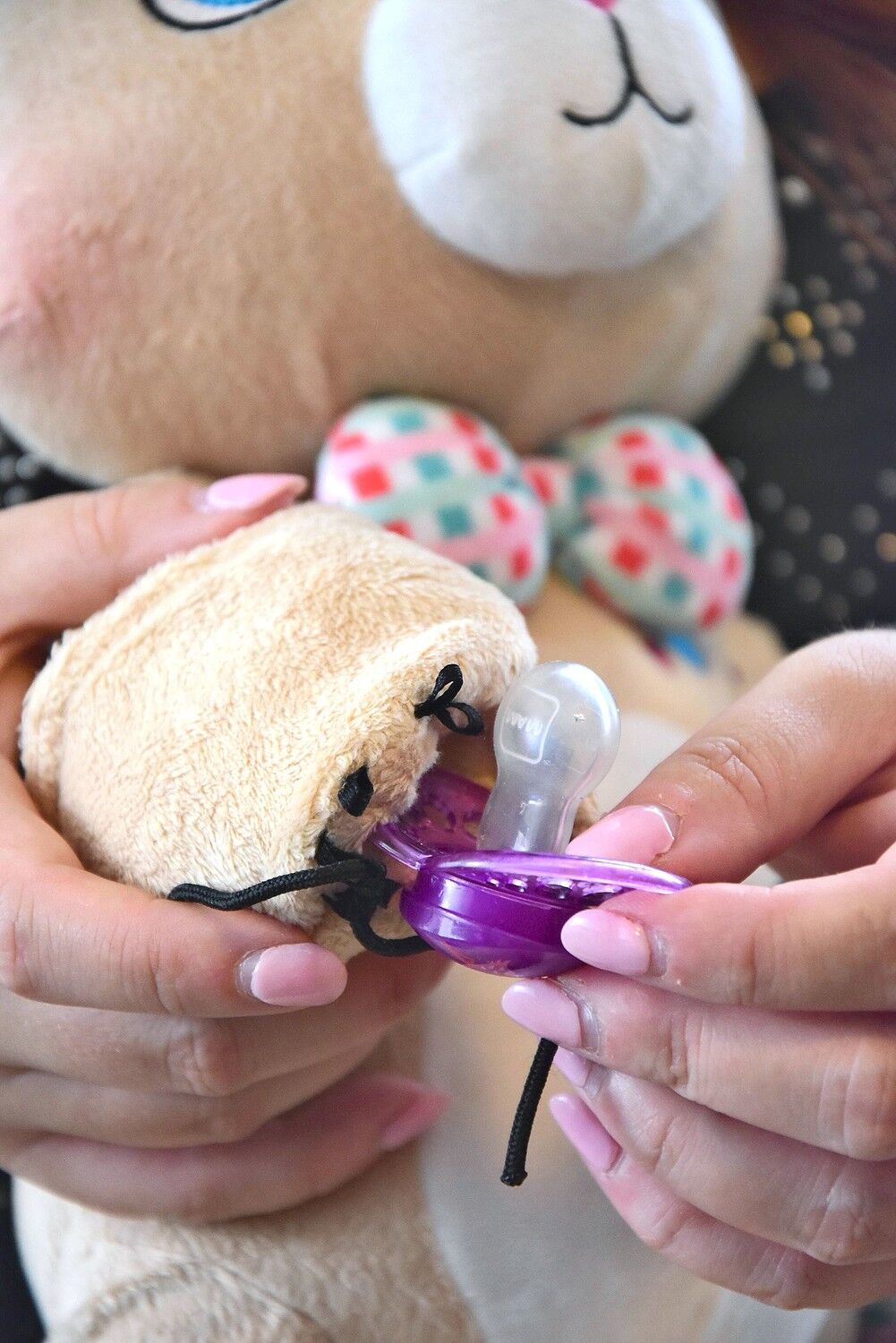 Kaitlyn Pierce demonstrates how Binka Bear works by placing a pacifier in the toy bear's paws. The laces on the paws hold the pacifier in place. Children can feel the pacifiers when they hold the bear while they sleep.

Kaitlyn Pierce holds "Binka Bear", a project she developed as way to wean young children from their pacifiers. She used an online funding platform to raise the funds she needd to bring the project to development.

Kaitlyn Pierce demonstrates how Binka Bear works by placing a pacifier in the toy bear's paws. The laces on the paws hold the pacifier in place. Children can feel the pacifiers when they hold the bear while they sleep.

PITTSFIELD — Kaitlyn Pierce was trying to wean her oldest daughter, Sylvia, from her pacifier when she first thought of the idea.

Sylvia, loved stuffed animals, and liked to hold her pacifiers as much as put them in her mouth. What if there was a stuffed animal that held the pacifiers so Sylvia could feel them when she slept with the toy at night?

How about a story that explained why the bear needed to hold the pacifiers in the first place?

And so came "Binka Bear," a plush toy bear that can hold pacifiers in special laced-up paws, and an accompanying illustrated children's story book.

It took two years before Pierce finally began working on the project last December. She thought the idea had merit. But being from humble origins, the Pittsfield resident knew she would need funding to develop it.

Pierce could have sought funding the traditional way, from friends and family or through a commercial loan from a financial institution. But she decided to try Kickstarter, an online fundraising platform. Kickstarter and other similar crowdfunding platforms are transforming the way young entrepreneurs like Pierce can raise enough capital to get a project off the ground.

"It's opened up a whole new avenue of funding for concepts and early stage entrepreneurs," said David Curtis, the entrepreneur in residence at 1Berkshire, the countywide economic development agency. "It's a whole space that wasn't there that allows them to get early stage or seed funding that they wouldn't have had access to before. It's sort of like taking friends and family to the next level."

Pierce began her campaign July 6 seeking $20,000 for development costs, and successfully completed it 35 days later. To attract backers to Binka Bear ("binka "is a word young children often use for a pacifier), Pierce's campaign provided them with incentives, like discounts on the completed product's price, in exchange for pledges at different dollar amounts. Offering rewards to project backers is a typical practice in Kickstarter campaigns, according to the platform's website.

"It helped us raise the funds," said Pierce, who raised $20,146 from 154 backers during her campaign's specified time frame.

"You can set any goal that you want," Pierce said. "For us, we needed at least that much money to place an order for manufacturing. That was going to give us enough inventory to actually turn over and make some money to grow this a little bit."

Kickstarter leaves entrepreneurs facing an all-or-nothing scenario — they get nothing if they fail to meet their fundraising goal. And it's far from a slam dunk. The success rate for the 415,900 projects that have been launched on Kickstarter since the platform's inception in 2009 is just 36.3 percent, according to the organization's website. If a product is successful, Kickstarter and its payment processor each receive 5 percent of the total amount of funds that are raised by the product's creators.

But the use of funding platforms like Kickstarter can be useful for young entrepreneurs like Pierce, if they prepare for them the right way.

"It's an alternative way of raising capital," said Keith Girouard, the director of the Pittsfield office of the Massachusetts Small Business Development Network. "It's a form that isn't based on credit scores and a track history. Kickstarter is a platform where if you've got a creative product it's good for that."

On the downside, "you have to be prepared to do it," he said. "You have to put together a campaign and that will take some time, and you need a compelling story, usually a video, a marketing plan and a strategy. You have to be realistic about how much money you're going to be raising."

If Pierce had sought financing for a startup like Binka Bear through a commercial loan at a bank, she would have been required to present a business plan, provide information about the market she plans to sell the product in, and how she planned to execute her strategy, said Jay Anderson, the president of Pittsfield Cooperative Bank, speaking of commercial loan plans in general.

Due to the risks associated with funding a startup, banks often find it difficult to become involved in funding these type of projects, Anderson said, especially those that are secure lenders and operate in small markets.

"It's raising money without taking on unaffordable debt or giving up equity for the most part," Curtis said. "Probably the biggest challenge is getting to the right market with the right message, and that can be a real struggle.

"Different platforms have different preferences and different programs are looking to assist different entrepreneurs with different types of ventures. Some are in technology, some are for nonprofits, some have a dollar limitation. The first challenge is doing the research to see where you fit in the great variety of options that are out there."

Pierce chose Kickstarter as a funding option because it seemed like a good way to validate her idea before deciding whether to put herself or her business in debt.

"This process helped us get a better idea of how people would respond and raise the money we need to get our first purchase order," she said.

"For a Kickstarter campaign to be successful there is a lot of legwork that goes into preparing for it," she said. "Thankfully, I am a photographer and a social media professional, so that helped a lot."

Pierce, who has worked at Studio Two in Lenox and runs Pierce Social, a social media marketing company, began developing Binka Bear in December when she set up a website and a Facebook page. The day after posting that information, she began receiving feedback from family and friends asking how to invest in her proposal, which "reaffirmed" the belief that her idea had merit.

She built a prototype and illustrated Binka Bear's accompanying storybook with $15,000 she obtained by pooling her owns funds with those of her brother and a friend, who are both now officers of her company. Pierce met the book's writer while attending a conference with Pierce Social.

Finally, she made a video for her campaign page, and outlined the rewards for each of her funding levels, which ranged from pledges of $1 or more to $1,000 or more.

"Because I've done social media and marketing for a long time, if there's anything I know it's the power of good marketing and building that community that you're trying to serve," Pierce said. "So I started our social media accounts back in January and tried to include everybody in what we were doing. We polled people on what color [the bear's] bow tie should be what color the bear should be, all kinds of things. We used that money for the actual development because I knew that the first impression has to be a really good one.

"We had been trying to build that community a little bit so when we got to Kickstarter there were already people waiting for it," she said.

She found a manufacturer through a Facebook group after connecting with a fellow entrepreneur, Neil Hoffman, who developed "Mensch on a Bench," a doll and storybook somewhat similar to Binka Bear, that had received funding from investors on the television show "Shark Tank" in 2014.

Like Pierce, Hoffman had originally developed his product with help from Kickstarter. He connected Pierce with his manufacturer, former toy company executive David Scher, who agreed to help her.

"He's semi-retired now and likes to mentor," Pierce said. "He works with a lot of Shark Tank entrepreneurs. I just happened to find my way."

Pierce has placed her order and hopes to receive the finished products from the manufacturer by next month.

She said a willingness to network is a key part of developing any project that is similar to hers.

"Go to all those entrepreneur meetups to say hello or to ask questions," she said. "I have found a lot of great help and mentors in Facebook groups, particularly for me groups for female entrepreneurs. But there's groups for everybody.

"As for funding, I would say build your list ahead of time," Pierce added. "Build that list of people who are going to commit to this. Also reach out to family and friends. Make sure that they're aware and use social media in your community. Make sure you build all that because you need something to launch to.

"You need some excitement, and you need to build that," Pierce said. "People like to be part of successful things. If you can position it as if you're already going to be successful when you launch you're going to attract a lot more."