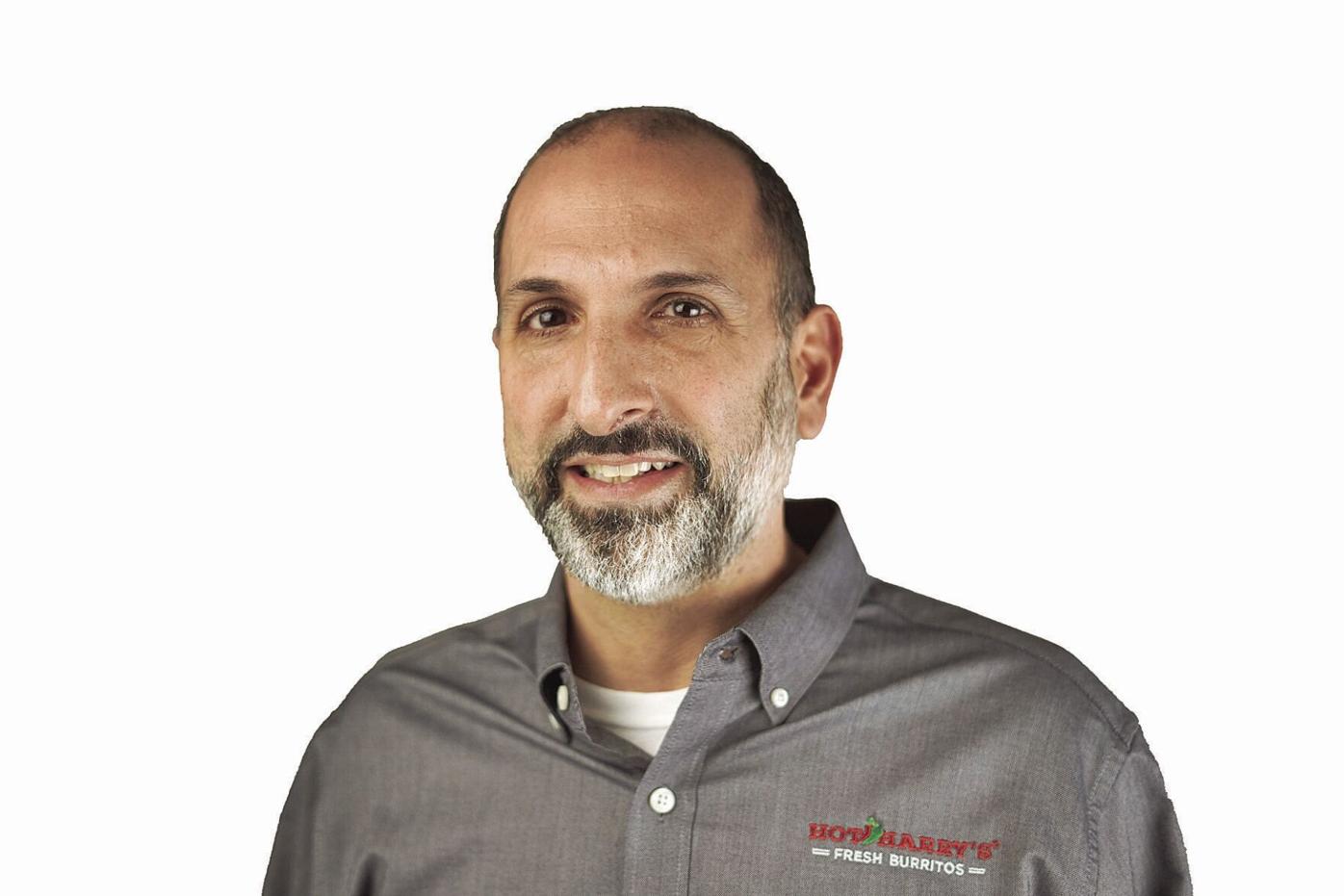 Samir Abdallah, founder and president of Hot Harry's Fresh Burritos, says he doesn't believe he'll ever get back in the corporate world. "I love what I'm doing. I wear so many different hats now," he says. "I'm able to work inside the restaurant, meet customers face-to-face. ..." 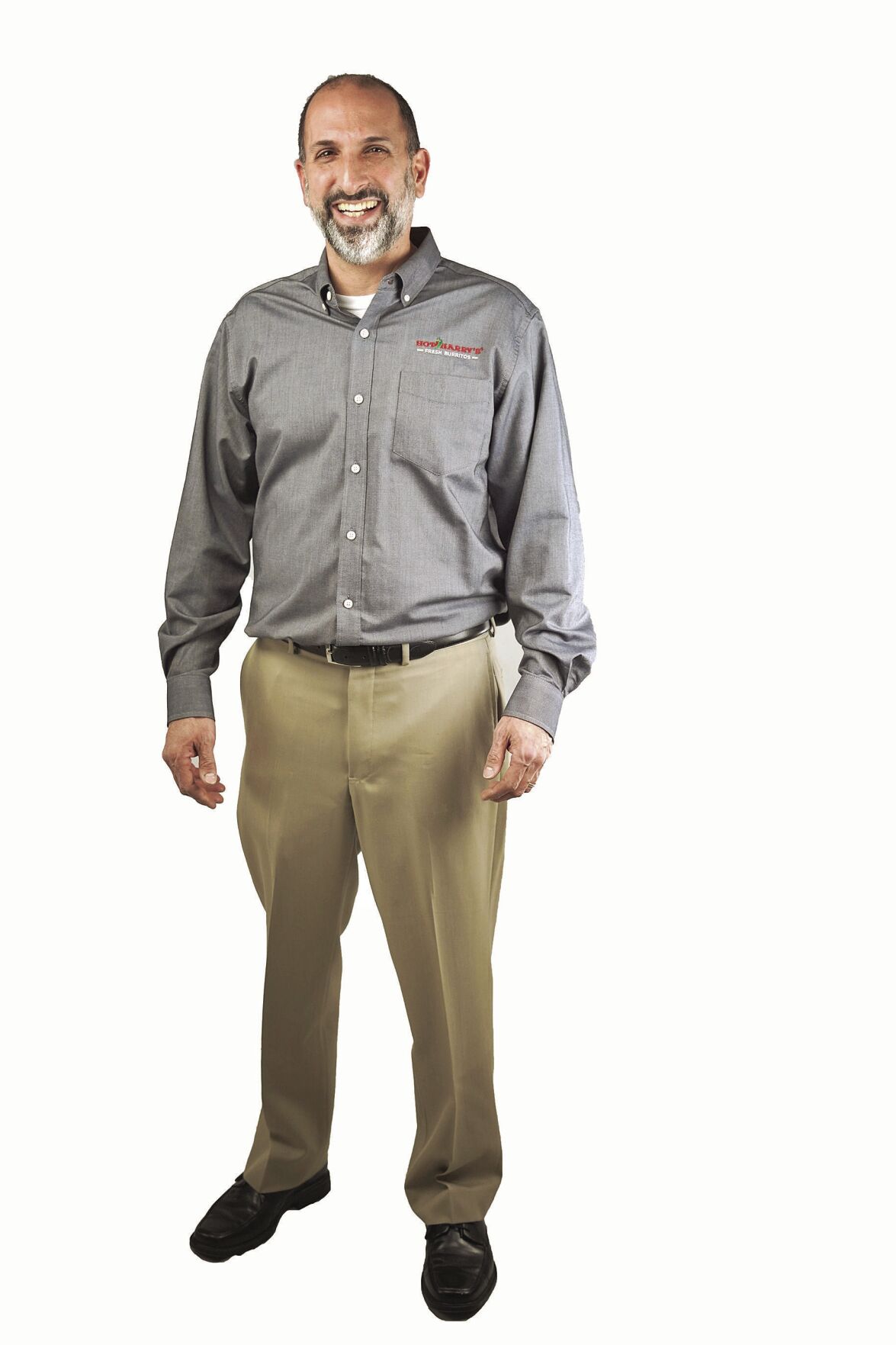 Samir Abdallah, founder and president of Hot Harry’s Fresh Burritos, says he doesn’t believe he’ll ever get back in the corporate world. “I love what I’m doing. I wear so many different hats now,” he says. “I’m able to work inside the restaurant, meet customers face-to-face.”

Samir Abdallah, founder and president of Hot Harry's Fresh Burritos, says he doesn't believe he'll ever get back in the corporate world. "I love what I'm doing. I wear so many different hats now," he says. "I'm able to work inside the restaurant, meet customers face-to-face. ..."

Samir Abdallah, founder and president of Hot Harry’s Fresh Burritos, says he doesn’t believe he’ll ever get back in the corporate world. “I love what I’m doing. I wear so many different hats now,” he says. “I’m able to work inside the restaurant, meet customers face-to-face.”

PITTSFIELD — Samir Abdallah always wanted to run his own business and own his own restaurant. So, when he decided to change careers 17 years ago, he followed in his grandfather and uncle's footsteps and opened his own eatery.

Locations: Four restaurants (two in Pittsfield, one in Dalton, one in East Greenbush, N.Y.)

Abdallah is the founder and president of Hot Harry's Fresh Burritos, a fast-food restaurant franchise with three eateries in the Berkshires and one in East Greenbush, N.Y. His grandfather, the late Isa Ali, co-founded the Angelina's sub shop chain with his grandmother in 1958. Angelina's is run by Samir's uncle, Faisal Ali, who also runs the Berkshire-based Juice N' Java chain. Faisal originally helped Samir start Hot Harry's.

We spoke with the Pittsfield native recently about why he decided to change careers, how the fast-food business has been affected by COVID-19 and how his family helped make his business successful.

Q: Why did you decide to form Hot Harry's 17 years ago?

A: I was working down in Atlanta with Georgia-Pacific, the paper lumber company, and 9/11 had just occurred. They were laying people off, and sooner or later, it was going to come to my family. So, I put my resume out there, but with a name like Samir Abdallah after 9/11, it was hard to get a job.

Q: What made you choose burritos?

A: We loved the food. ... They [burrito restaurants] were popping up everywhere. Local mom and pops, there were chains, the big guys. We kind of went around, saw what we liked the best of, and created our own menus and recipes.

Q: Your uncle's been in the restaurant business a long time. How much of an influence has he been on you and Hot Harry's?

A: We probably would not have been here in Pittsfield, one. And two, getting off the ground, [he] was vital to us. Just putting us in touch with the right people and helping us with the design and layout, things like that.

Q: With relatives already in the business, you must have had a good idea of what you were getting involved in.

A: I grew up in the restaurant business. My grandfather and grandmother started Angelina's. ... My mother had an Angelina's in Maryland [Ocean City], and growing up, I worked for her. It's kind of been in my blood. ...

I was born in Pittsfield, grew up in Ocean City and Atlanta. My mother moved to [Ocean City] when I was in middle school.

Q: How did you come up with the name Hot Harry's?

A: We were trying to do something fun. ... We weren't authentic Mexican. We were kind of California-style Mexican. ...

We looked at some Mexican names, some Hispanic names. We decided that [Hot Harry's] would be more of a [fun] atmosphere to try and tie in what we were doing.

Q: In 2015, you brought in a partner, Richard Tarascio, who had been an executive at  Wayback Burgers, a Connecticut-based fast-food chain. How did he help you?

A: When he came on, he straightened out our systems.

Our systems were easily duplicatable for each location. He helped us with our vendors and buying power. He helped us with thinking outside the box, like changing the recipes; we were so stuck. Our logo changed. Some of the designs of the stores have changed.

Q: So, having someone to help you think outside the box was why you brought him here?

A: Yes. He came from a larger company that had looked into buying us out. We decided not to go ahead with that deal. ... But, he liked us so much, he came over anyway. ...

He's no longer with us, but he did a phenomenal job when he was here, tightening our systems, making every store more profitable. ... We remain great friends today. He still comes on as a consultant, helps me when I need help. It's all good.

Q: Tarascio told me when he came on that his goal was to have something like 200 [Hot Harry's] locations within five years. That's a really big goal.

A: That was just a number that he threw out there. Going into COVID, we actually had some momentum going, but COVID kind of stalled us. ... I'm hoping that it's a temporary hold. We'll see how we come out of it.

Q: How has COVID affected the fast-food business?

A: We've been very fortunate. Our business model is set up for takeout. Our sales have been relatively consistent. But, there's the expenses. You're paying a lot more in labor.

We've been doing a lot of things to comply with the COVID rules, and then you have all the takeout material that you have to pay above and beyond. ... The gloves are hard to get, plus, they've doubled in price the last two months.

Obviously, it hurts the bottom line, but we really can't complain. We're watching some of our larger friends, the dine-in restaurants, what they've been going through. ... We've been very happy with what we've been able to do in the last year.

Q: Are there other plans to grow the business?

A: My wife and I are working on another new concept here in town. We're opening a wing business. Its going to be called Saucy Wings [the company went online the day after the Super Bowl].

We're going to open a ghost kitchen [a professional cooking facility set up only for delivery purposes]. It's a concept that we like. ... It's not going to be available through Hot Harry's, only through third-party applications, for delivery. ... We're trying to diversify a little bit. We're doing our sauces now in retail.

Q: What did you originally plan to do when you graduated from college?

A: When I got out of school [Georgia State University], I worked for Georgia-Pacific immediately. I actually got [recruited] by four different companies. I went with Georgia-Pacific because they had the best stability in the plant. It was good. I did a little bit of everything, inside sales, outside sales, a little bit of service, purchasing and doing national accounts for them.

All these years later, I'm still using those programs. I'm putting together buying programs from my stores. We do the marketing, my wife and I. Everything we learned at Georgia-Pacific pretty much applies here.

Q: Do you think you'd ever go back to the corporate world?

A: I don't think so. I love what I'm doing. I wear so many different hats now. I'm able to work inside the restaurant, meet customers face-to-face. I get to do some prep cooking. I do the corporate side of it, the negotiating, the franchise sales. ...

I'm really doing everything tied into one job. It's exciting. You can only hope that you find a job where you love what you do, and I think my wife and I live that every day.