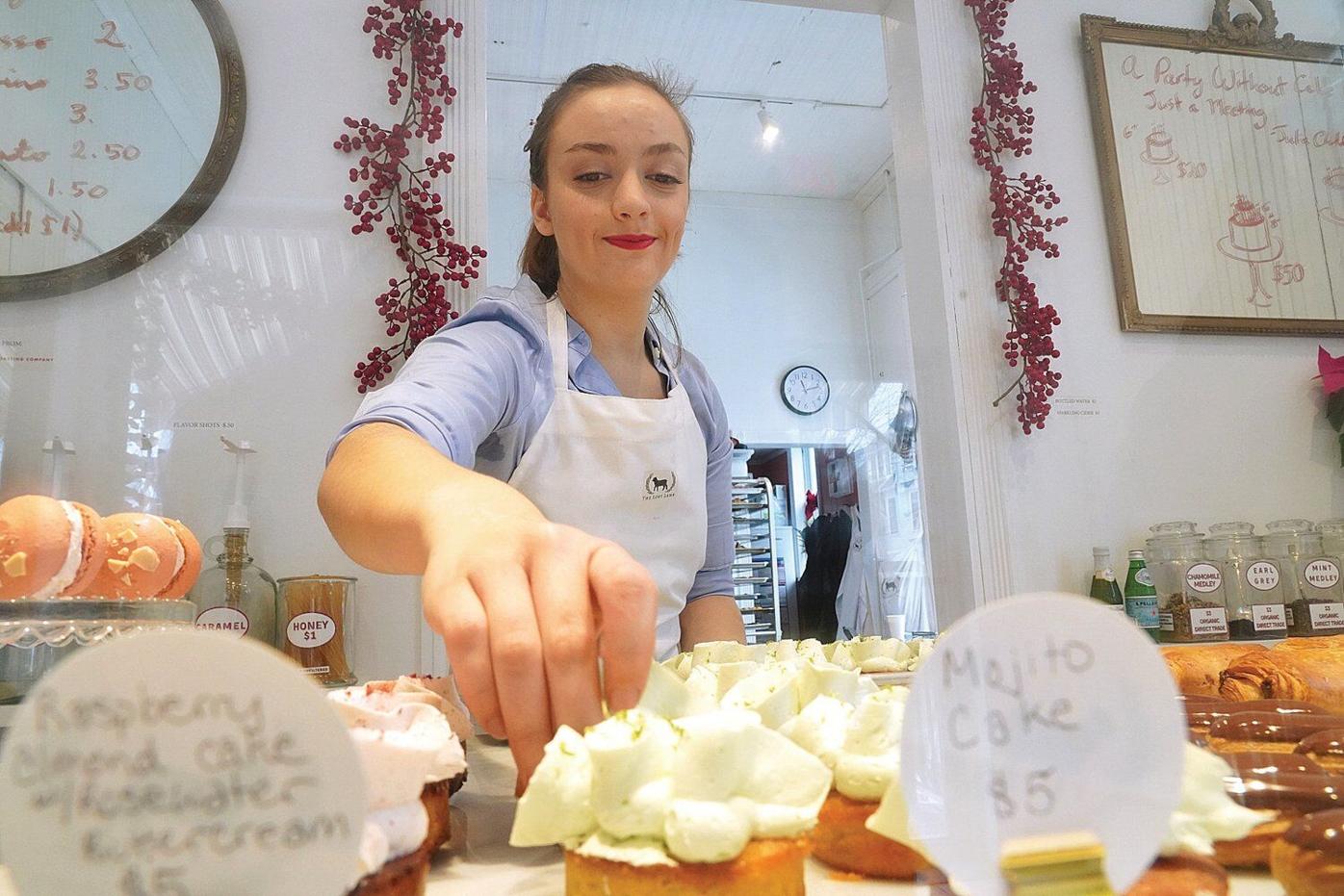 Claire Raposo arranges a fresh batch of her mojito cakes at The Lost Lamb in Stockbridge. She earned a pastry degree from the venerable Le Cordon Bleu in Paris. 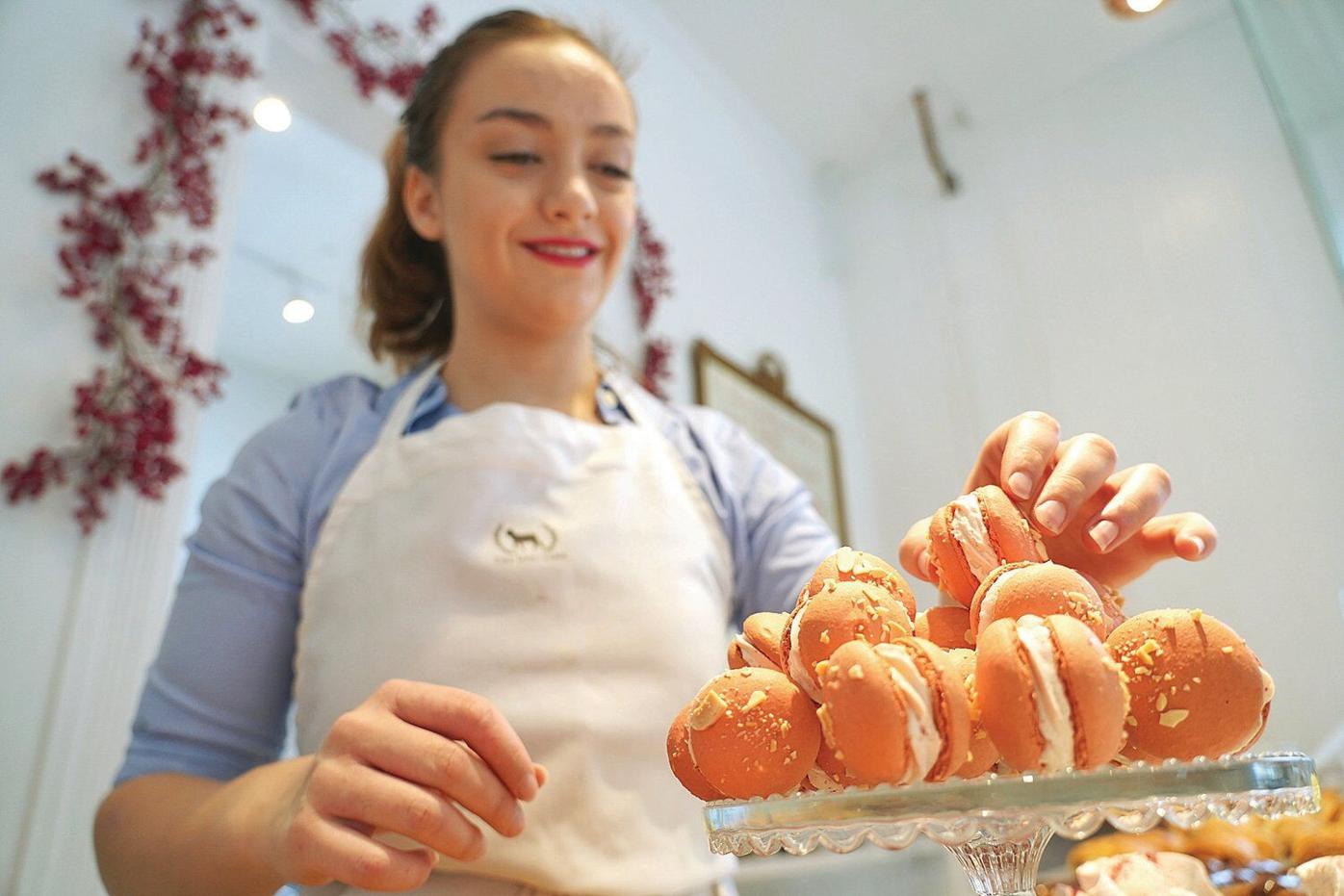 Claire Raposo stacks a fresh batch of macarons at The Lost Lamb in Stockbridge. She perfected this classic French cookie while earning a pastry degree from the venerable Le Cordon Bleu in Paris. 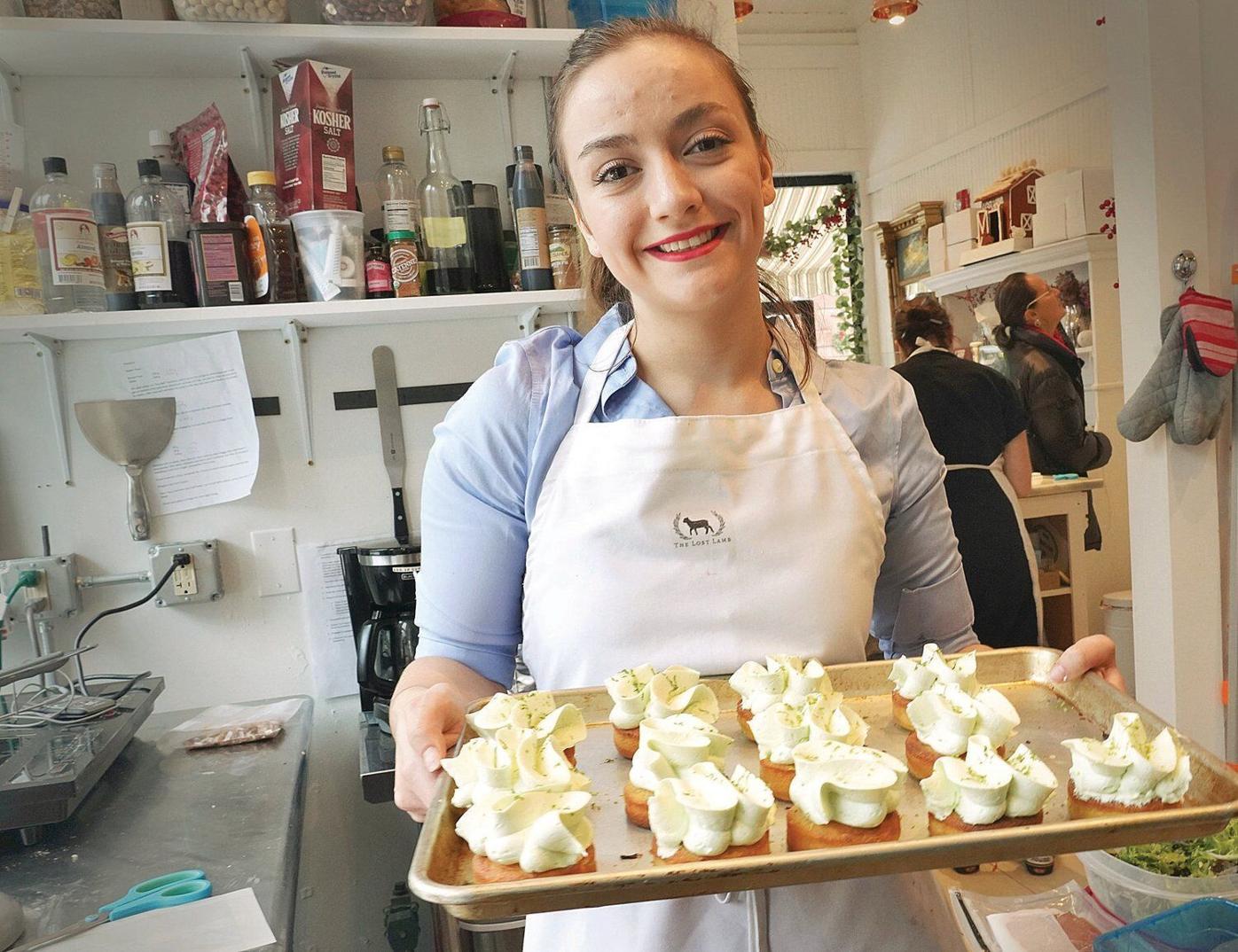 Claire Raposo arranges a fresh batch of her mojito cakes at The Lost Lamb in Stockbridge. She earned a pastry degree from the venerable Le Cordon Bleu in Paris.

Claire Raposo stacks a fresh batch of macarons at The Lost Lamb in Stockbridge. She perfected this classic French cookie while earning a pastry degree from the venerable Le Cordon Bleu in Paris.

STOCKBRIDGE — With a twist of a door sign declaring herself open for business on Nov. 22, Claire Raposo has established a Parisian beachhead here in a town once described by Norman Rockwell as the "best of America, the best of New England."

With the opening of The Lost Lamb — a patisserie and "snackery" — Stockbridge is now home to a cafe modeled on the old French style, which has as much to do with food and beverages as it does with atmosphere and attitude.

Packed with customers since its opening, the enterprise has been a veritable whirlwind for Raposo, who's only 19 years old and who no longer sleeps as much as she'd prefer.

But success is precisely what she bargained for when she packed her bags in 2018 and headed to Paris for a year to earn a pastry diploma from Le Cordon Bleu. She returned home with a set of skills now on masterful display seven days a week in this narrow rental space on the north side of Main Street.

The cafe's front window looks out upon a scene eerily identical to the one Rockwell famously captured on canvas more than 50 years ago. But while Main Street appears the same, the smells have decidedly changed, thanks to Raposo and a whole lot of butter and cream.

Her specialties include classic French pastries such as macarons, eclairs and pain au chocolat. She serves breakfast sandwiches, too, on buttermilk biscuits. Her two lunch sandwiches are prosciutto with gruyere and roasted red peppers with mozzarella served between two slices of fresh-baked focaccia (which, of course, is an Italian-style bread, but so what). The soup changes daily. She features Barrington Coffee in various iterations and hot chocolate made with ganache that has its own cult following.

The counter includes colorful confectionary creations birthed and named that day, all of which look almost too beautiful to consume. Many customers resort to what Eileen Baker recently did: Purchase it, take a picture of it, and then eat it.

"I sent pictures to my daughter," said Baker, from Connecticut, who was staying across the street at the Red Lion Inn for New Year's.

"She clearly cares about what she's doing here," Archie Elam, also in town from Connecticut, said of Raposo.

Since the cafe's opening, complete Instagram strangers have reacted to photos of Raposo's creations by inquiring if she's hiring. She now has five part-time employees, including Anna Aron, 24, of Great Barrington.

From Chatham, N.Y., homeschooled for four years before attending Berkshire Country Day and then Milton Academy, Raposo was attracted to the kitchen before she could barely walk.

"She was probably 5 when she would take over the pancake-making," said her mother, Ticky Kennedy. "She'd want to add chocolate chips, embellishments and dyes of different colors. In elementary school, she'd make herself these elaborate lunch plates where all the fruits and vegetables would be fanned out and arranged. Her interest was always in both presentation and taste."

Whenever her parents had dinner parties, Raposo would impress the guests with elaborate desserts that left a battle scene in the kitchen — bowls, baking pans and measuring spoons scattered upon every horizontal surface. She'd do the clean-up, too. Maybe there was something in the genetics. After all, her grandfather, Joe Raposo, wrote the song "C Is For Cookie," famously sung by Cookie Monster. (He also wrote the theme song to Sesame Street and "Bein' Green.")

Upon graduating high school, Claire decided to take a pass on attending a four-year college and instead announced her wish to study in Paris. The family couldn't afford it, so she raised funds in large part through starting a farmers market in Chatham. Her focaccia drew a large following — large enough to get to Paris.

She boarded the plane knowing only a little French. She had to quickly immerse herself in the specialized vocabulary of poaching, icing, heat, air, water, pastes and creams. The intense year abroad included time to soak in some cafe culture as well. The Lost Lamb — named after the former farm upon which she grew up in Chatham — seeks to recreate that cafe culture whereby people come to a full stop to sip, nibble, connect or disconnect, before carrying on with the rest of their day.

"I wanted to create an environment where you can just have a piece of cake and be happy about it," Raposo said. "Everyone wants pastries, and then they're miserable that they ate a pastry. Just be happy about it. Why would you do something to make yourself happy and then be miserable about it?"

Hey — the French live like this all the time. Vive la France!

Come spring, The Lost Lamb will offer outdoor seating. Inside, the cafe seats about a dozen. And yes, the kitchen is tiny — too small, in fact, to fit an industrial-sized mixer. Raposo's father, Nick, stops in to help mix dough by hand.

The cafe is self-financed, with the help of Raposo's parents, who are 40 percent owners.

"This is Claire's creation all the way," said her mother. "She's always had a real gift for connecting with people and creating a little community, and that's what has happened here. We've just watched in astonishment."