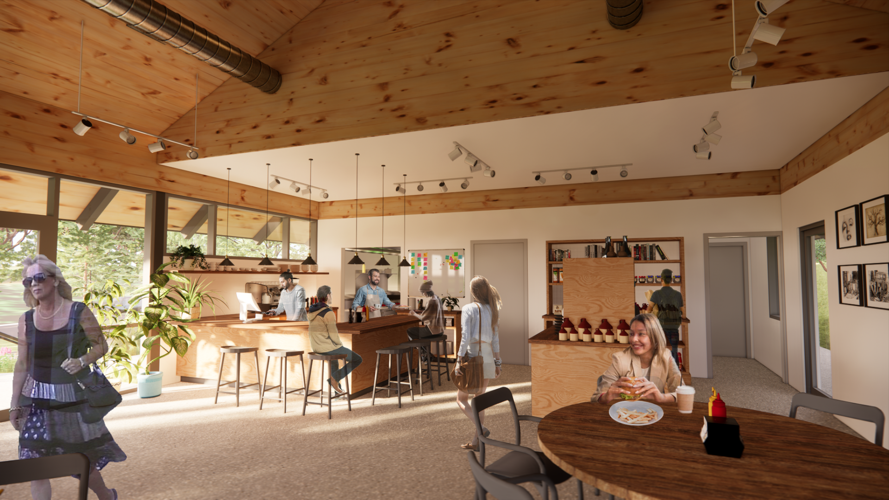 The interior of the new Roadside Store and Cafe will be roomier than the original one, according to this artist's rendering of the project. 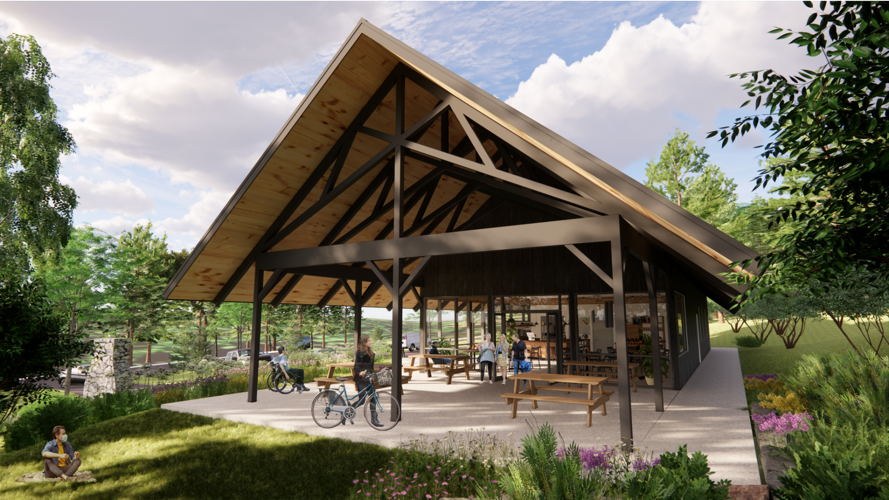 Gould Farm plans to install a covered patio at the new Roadside Store and Cafe, shown here in this artist's rendering of the project. 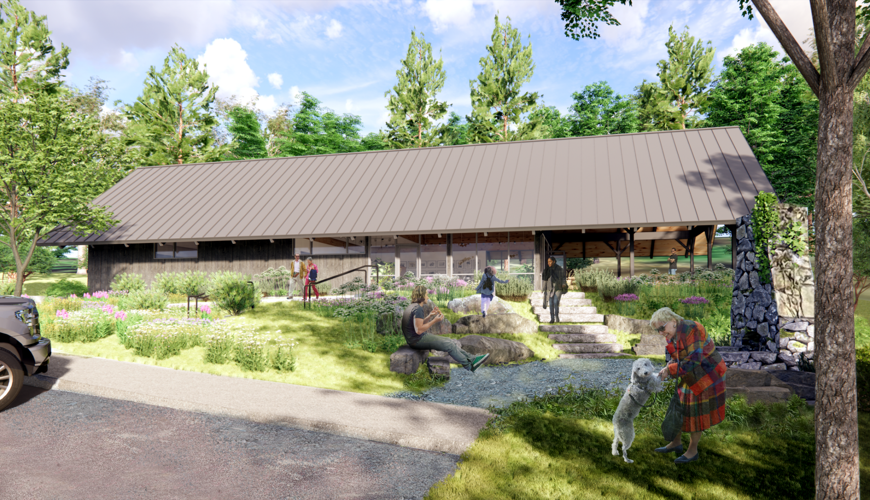 The new Roadside Store and Cafe will be located on the same site as the old one, but the building will be set back farther from Route 23.

The interior of the new Roadside Store and Cafe will be roomier than the original one, according to this artist's rendering of the project.

Gould Farm plans to install a covered patio at the new Roadside Store and Cafe, shown here in this artist's rendering of the project.

The new Roadside Store and Cafe will be located on the same site as the old one, but the building will be set back farther from Route 23.

MONTEREY — Ten months after closing the popular Roadside Store and Cafe on Route 23, Gould Farm is making headway on constructing its replacement.

A residential therapeutic and farming community that had run the town’s only eatery since 1978, Gould Farm recently entered the public phase of the capital campaign it began in November to raise the funds to build what it refers to as “Roadside Cafe 2.0.”

Gould Farm raised $440,000 for the project during the capital campaign’s private phase, and is looking to raise an additional $110,000 during the opening round of the public phase.

To move that process along, an anonymous donor and Gould Farm’s board last week announced a $55,000 matching gift challenge, meaning they will match all additional contributions received by Aug. 19 on a one-to-one basis.

That match challenge has yet to be met, Gould Farm’s development director Melanie Brandston said on Wednesday.

The entire project is expected to cost $1 million, but Brandston said $550,000 is enough to get the Roadside Cafe 2.0 project underway, and complete two-thirds of the construction. Once the campaign reaches that threshold, Gould Farm can begin planning for construction, which will consist of site and prep work, according to executive director Lisanne Finston.

Gould Farm has yet to hire a contractor, and the old building still needs to be demolished before site work on the new building can begin, but both Brandston and Finston said it’s possible that construction could start before the end of this year.

“I think that at this stage of the game every day moves us further away from that happening, but who knows?” Finston said. “Based on the weather and how much site work can be done at the end of the year, I hope we can at least get some demolition done.”

Once the $550,000 threshold is reached, Finston said Gould Farm will be able to move the project from the schematic design phase into the actual site and construction phase, which she expects will include the permitting process with the town of Monterey.

“The next step is really having more detailed plans and going to the town to move through our approval processes,” Finston said.

Finston said she expects the Conservation Commission will need to review the project and the new structure’s septic system will need to be reviewed before construction can start.

“I don’t think we’re going to need any zoning,” she said. “We’ll just go through the usual permit process.”

The new restaurant will be built on the site of the former cafe, which was housed in a 100-year-old building that had once served as a gas station. The eatery, which is staffed by residents of Gould Farm, became known for its food, its lack of space, and the employment opportunities that it gave to people dealing with mental health issues.

According to Brandston, the new building will be 2,000 square feet, double the size of the old one. It will contain a commercial kitchen, retail area, bakery counter, dining area and three bathrooms. Deigned by Zac Culbreth Architecture of Great Barrington, the building will also be set farther back from Route 23 than the old one was and have a 400-square-foot patio for outdoor dining. Placing the new structure farther from the road will provide more parking for patrons, more room for green space and additional room for outside dining, Brandston said.

In a nod to the Roadside’s former use as a gas station, Brandston said the new structure could include an electric car charging station “if the possibility is there, but that’s getting way ahead“ of where the project is now.

The capital campaign started in mid-November, less than a month after the old Roadside closed on Oct. 30. According to Brandston, the board was prepared to chip in close to $200,000 during the capital campaign’s private phase, but Gould Farm wasn’t sure where additional funds would come from.

“We learned that probably 99 percent of the people who go to the Roadside as customers do not give to Gould Farm in general,” she said. “So we had to do a lot of word of mouth, and events as best we could because of COVID letting people know we needed to raise money and that anyone who was interested in making an investment could call to let us know.”

The hard work paid off, but an additional boost may have come because of the town Gould Farm is located in. During the fundraising process, Brandston said Gould Farm learned that the trustees of three major international foundations were Monterey residents, and their groups have all agreed to donate to the campaign.

Finston said the capital campaign will remain in the public phase until the $1M goal is reached.

“We’ll look to get as close to our goal as we can,” she said.