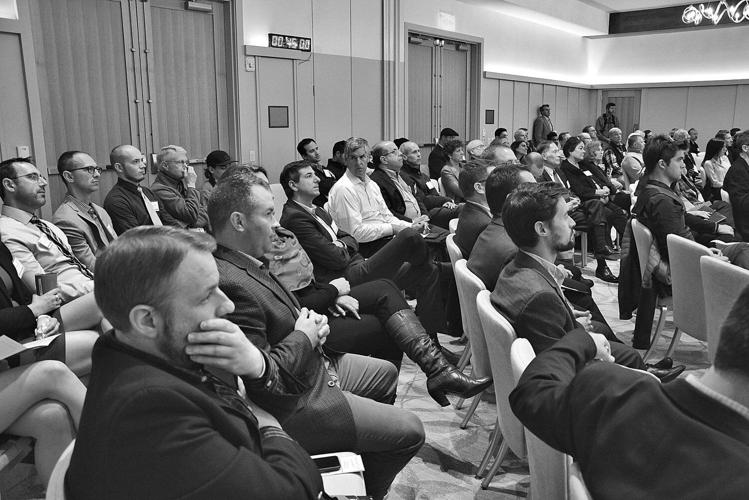 Business folk listen to proposals during business incubator Lever's final pitch contest presentations for its first Intrapreneur Summit at the Williams Inn in Williamstown on Thursday. 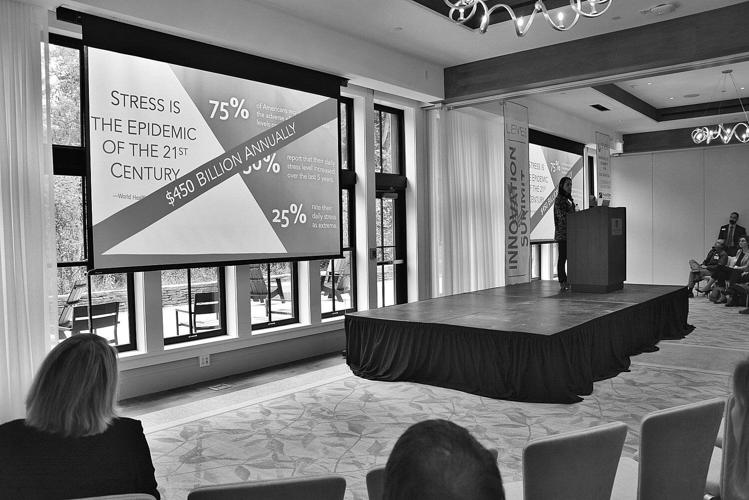 Rebecca Churt of Kripalu gives a presentation during business incubator Lever's final pitch contest presentations for its first Intrapreneur Summit at the Williams Inn in Williamstown on Thursday.

Business folk listen to proposals during business incubator Lever's final pitch contest presentations for its first Intrapreneur Summit at the Williams Inn in Williamstown on Thursday.

Rebecca Churt of Kripalu gives a presentation during business incubator Lever's final pitch contest presentations for its first Intrapreneur Summit at the Williams Inn in Williamstown on Thursday.

WILLIAMSTOWN — How hard is it to replace the windows on military vehicles when they're in the field?

"It's not as easy as calling Safelite," said David Walden, an industrial engineer at LTI Smart Glass of Pittsfield, referring to the ubiquitous windshield replacement company.

He ought to know.

Walden was one of two presenters of a new high-tech glass windshield for military vehicles that LTI is in the process of developing. The product was selected as the winner of the first Intrapreneur Challenge that took place Thursday at The Williams Inn.

The term "intrapreneur" is believed to have been coined in the 1980s by Apple founder Steve Jobs to describe entrepreneurs who create innovative products while working for larger companies.

The event was hosted by North Adams-based small business incubator Lever, which provides resources for budding entrepreneurs. As the winner of the event, LTI Smart Glass will receive $25,000 in seed money and business assistance from Lever to develop its new product.

Two of the four other finalists, LympheDIVAS of Pittsfield and B&B Micro Manufacturing of Adams, were chosen by the four-judge panel to share the runner-up prize.

The two other finalists were Boyd Technologies of Lee and Kripalu Center of Yoga & Health of Stockbridge. Two additional Berkshire companies, Shire City Herbals of Pittsfield, and Zogics of Lenox, qualified for the finals, but did not participate in the competition.

The four finalists that did participate all pitched innovative products designed to explore additional revenue streams.

"Anyone one who had questions about where the economy is going to be in the Berkshires should have been in this room for the last two hours," said 1Berkshire President and CEO Jonathan Butler, when the pitches and presentations from the finalists had concluded.

The Intraprenurial Challenge was the opening event in Lever's two-day Innovation Summit, which concluded on Friday. The inaugural event also included keynote presentations by American Online co-founder and Williams College graduate Steve Case on Thursday night, and by Carlo Zaffanella of General Dynamics Mission Systems of Pittsfield on Friday.

LTI's new product, called BR-4500, is a high-tech laminated ballistic glass panel that has been rebranded with an inner layer that enables it to withstand repetitive, high- powered, high-velocity .50-caliber machine gun rounds, Walden said during the company's presentation.

"This an extreme example of glass," Walden said, referring to the new product, which he said LTI was introducing "publicly" for the first time.

"Lots of other types stop small bullets, but this can stop bullets from a .50-caliber machine gun traveling at 1,000 feet per second." That phenomena is equivalent to being hit by a "semitruck," Walden added.

Chris Kapiloff, who developed School Guard Glass, a product manufactured by LTI that was invented to delay entry to armed terrorists when they attack schools, said up to 16,000 vehicles could be eligible for this new product in a $250 million per year market. Although military vehicles would be the primary users of the new glass, it could be available for civilian use, too, he said.

Production at LTI's Pittsfield plant is scheduled to begin during the second quarter of 2020, he said, and the company predicts it could add 120 new jobs to its 110,000-square-foot Pittsfield facility by 2025.

Headquartered in Pittsfield, LTI has 200 total employees in three locations, with 120 of those workers based in the Berkshires.

LympheDIVAs, which makes compression arm sleeves ad gauntlets for people suffering with lymphedema, pitched a new compression sock for the lower extremities, where lymphedema patients also suffer symptoms. "The upper extremity suppression market it still pretty small," company president Josh Levin told the judges. "The real market for growth lies in the market that lies outside of medical needs," like competitive athletics, he added. "We can compete with both markets."

B&B pitched a plan to develop a new business making tiny modular homes that company representatives said would be manufactured at the company's facility in Adams. Boyd Technologies previewed a plan to build a database to support medical device inventors. Kripalu said it was interested in taking an existing program online to specifically target working professionals in high-stress industries like health care, education and law enforcement.

Tony Dobrowolski can be reached at tdobrowolski@berkshireeagle.com and 413-496-6224.