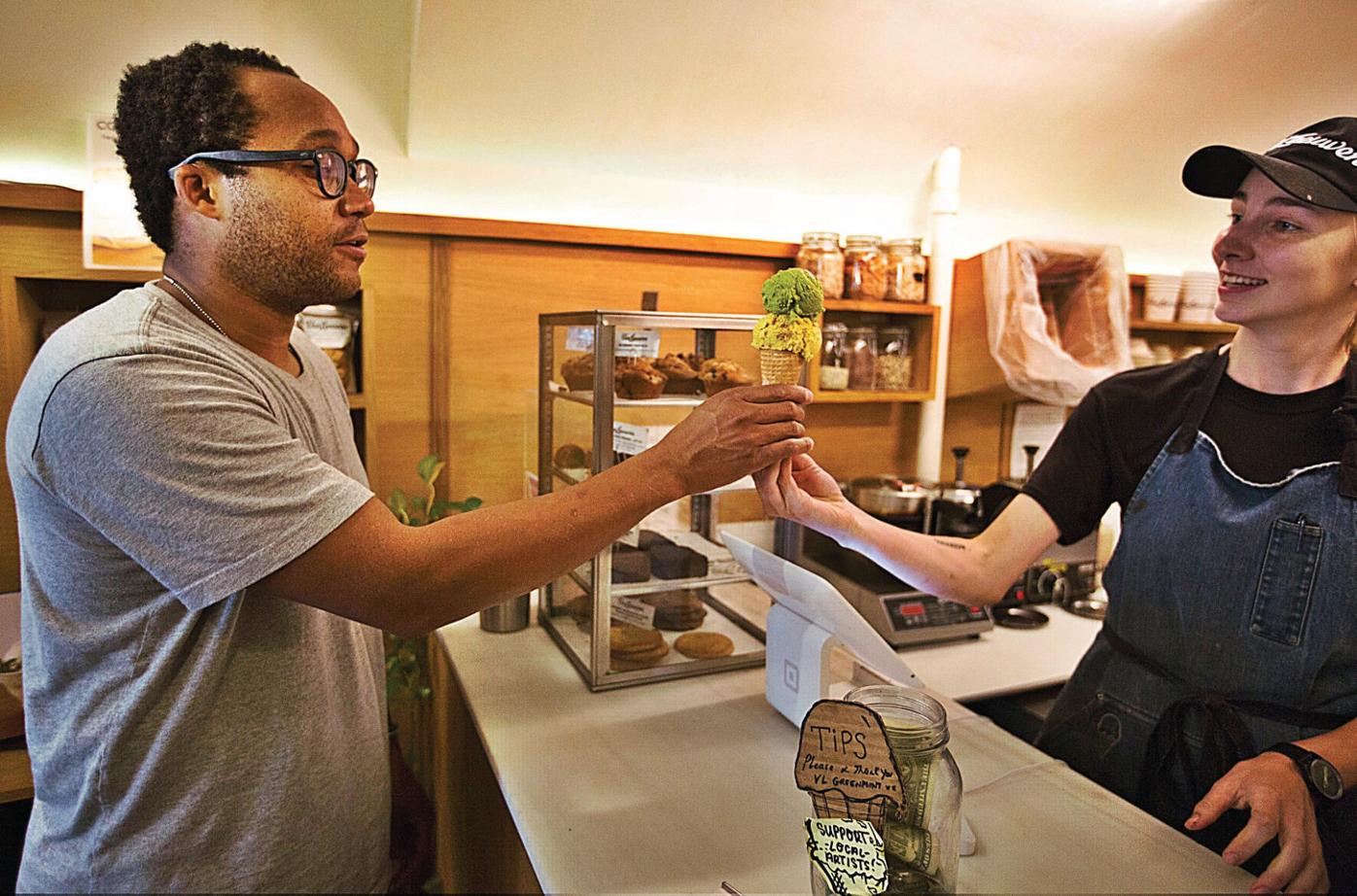 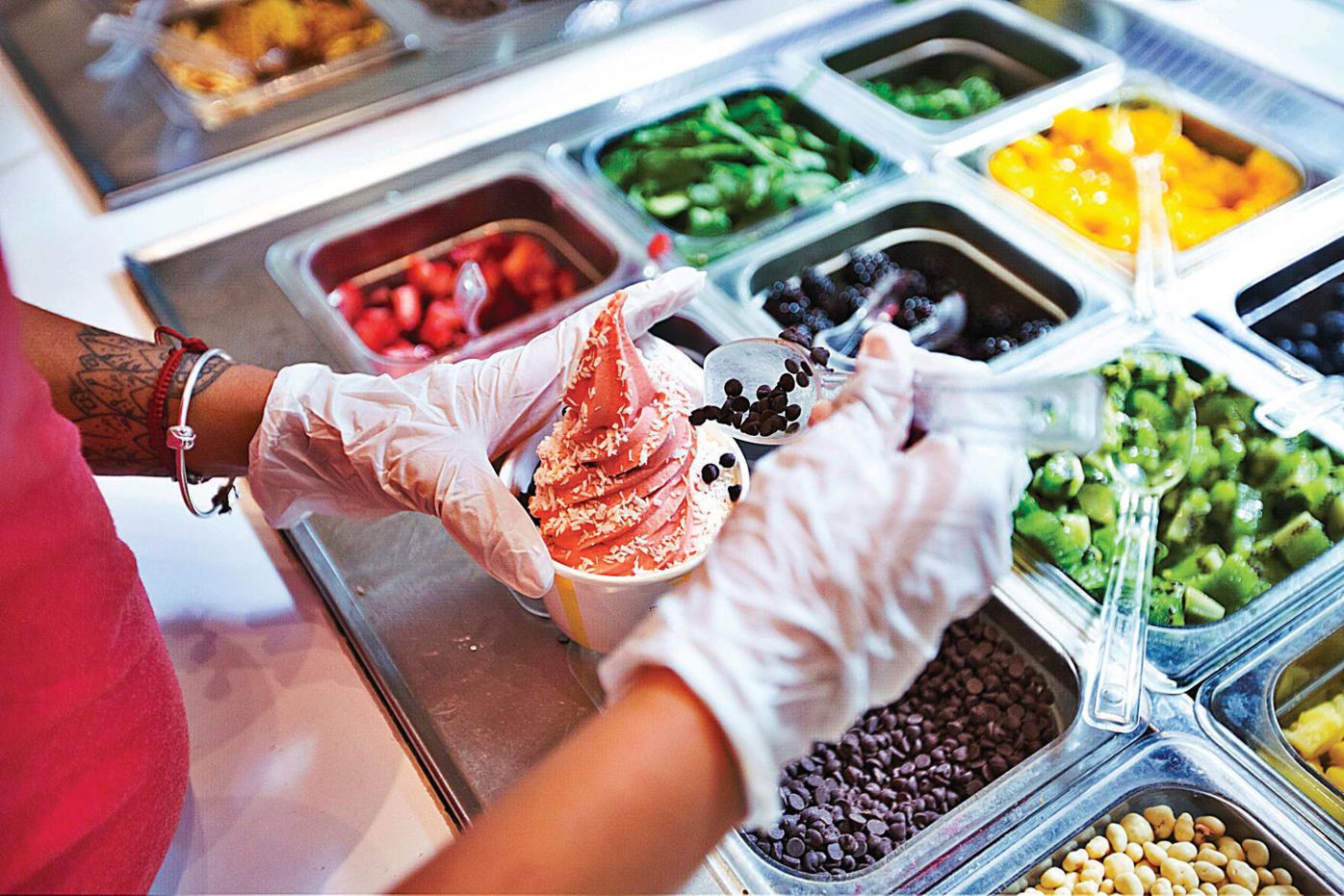 Chloe's strawberry soft serve, above, is gluten free, vegan and dairy free because it's made out of fruit, water, and organic cane sugar.

Chloe's strawberry soft serve, above, is gluten free, vegan and dairy free because it's made out of fruit, water, and organic cane sugar.

NEW YORK — Nice cream: It's what they call vegan ice cream. But with creamier bases and more interesting flavors, it's not just for vegans anymore.

Dairy-free ice cream options have come a long way thanks in part to meat-eating folk looking to avoid dairy or just make healthier choices without defaulting to sorbet, the usual substitute.

Though banana is a popular base for vegan ice cream, so are nut butters, rice, soy and even hemp milk. Whatever the base, the texture and quality of ingredients are giving the products a higher profile, both in scoop shops and on grocery shelves.

"I love, love, love ice cream but I can't eat it every day, you know," said meat-eater Alexis Druyan, 24, on a recent stop at Chloe's Soft Serve Fruit Co., a scoop shop in Manhattan's bustling Union Square. "If I want to be healthy, I definitely come here for dessert."

The Instagram-worthy neon light banana on Chloe's wall says it all: Started by a fro-yo addict looking for a healthier choice, the shop uses only fruit, water and a touch of organic cane sugar to blend up creamy frozen treats like dark chocolate and pumpkin. Chloe's opened its first shop in 2010, and now sells frozen pops in supermarkets and to hospitals, schools and hotels.

"The vegan thought process and connotation has changed over the last seven years," said Michael Sloan, CEO and co-founder of Chloe's. "When we first opened and something was vegan, it couldn't be good, and now I think we've helped explain that food can be delicious and oh, by the way, it's vegan. We used to hide that we were vegan or say it just for the vegans who wanted to see it was for vegans. Now we promote that it's vegan."

While all Chloe's offerings are vegan, Ben Van Leeuwen serves up dairy and non-dairy ice cream at five shops in New York and three in Los Angeles — and business is booming.

"Our customers asked for it. From day one we didn't want the vegan ice cream to be an afterthought or a supplement to our regular menu," he said of his Van Leeuwen Artisan Ice Cream. "We applied the same commitment to using the best quality ingredients and using little or no stabilizers. We make the vegan ice cream with house-made raw cashew and almond, organic coconut cream, raw cocoa butter from Ecuador, raw extra virgin coconut oil and organic cane sugar."

In upstate New York, C.A. Lane recalls darker days of vegan ice cream. She blogs as the Duchess of Vegan after transitioning 15 years ago from vegetarian to vegan.

"It's changed so much," she said. "When I started, most of the ice cream options were mostly soy based and I've always had a little bit of a stomach issue with soy. That was always a bit of a stumbling block, but I ate a lot of Tofutti Cuties," the ice cream sandwiches that helped launch vegan ice cream treats.

Within the last decade, Lane said, "we've started to see more companies emerging, more startups, and a lot of companies that already existed starting to offer alternatives to soy. Now we have everything from coconut-based to almond to cashew, and even big companies like Ben & Jerry's are offering an almond ice cream. To me that's so powerful, to see large companies embracing vegan and lactose-intolerant customers. It really shows how far we've come."

"This is no longer just about a small group of people," Wilmette said. "More and more people are adding these types of products into their lifestyle."

Carver Audain, 36, a vegetarian for 24 years, doesn't have much of a sweet tooth but enjoys Van Leeuwen's unusual flavors.

"I don't know that I necessarily stay away from dairy but if I have an option of trying something otherwise or avoiding it I will," he said at a Van Leeuwen shop in Brooklyn while eating turmeric and matcha green tea vegan ice cream.

Vegan and vegetarian cuisine in general is enjoying a higher profile with chefs and restaurant owners.

"There are a lot more options and it makes it more feasible for many people to consider an alternative diet," Audain said.

Ronen Seri, co-founder of two vegan restaurants in Manhattan named Blossom, has been vegan since the mid-1990s and recently published "The Blossom Cookbook" with business partner Pamela Elizabeth.

Their restaurants' desserts include a vegan gelato, Cashewtopia, from a company called Organic Nectars. It's free of dairy, soy, refined sugar, gluten and trans fat in a raw cashew base.

Vegan "used to be like a foreign word," Seri said. "People used to think you were eating lettuce. We get so many people coming here who are not vegans at all and when they taste the food they're like, 'Wow, I didn't know it could taste that good.'"