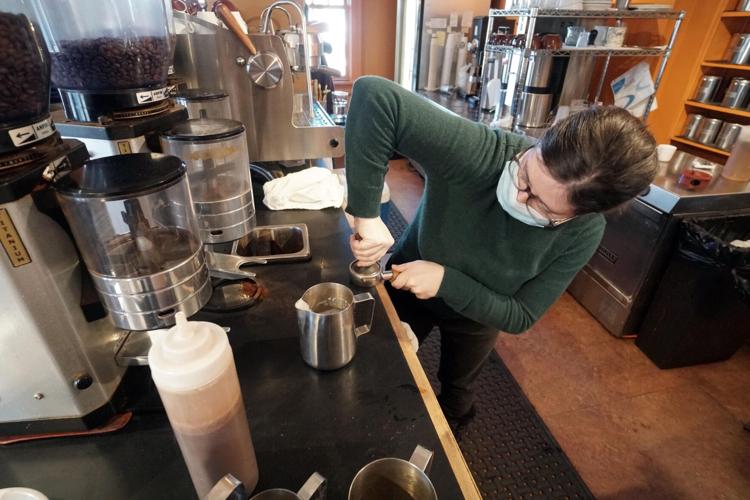 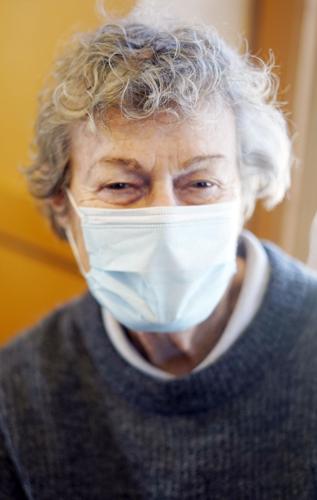 Linda Morse of Richmond says she’s concerned about the slow toll being taken in the retail sector, and worries that some businesses may not rebound. 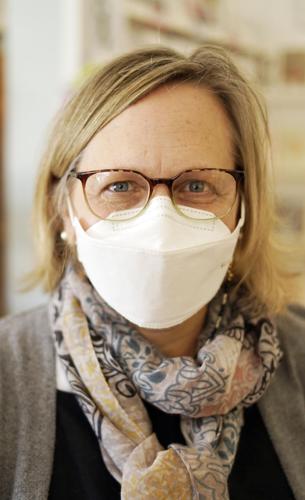 Jenn Berkel, owner of What a Gift in Lenox, laughed when told that the town is among those considered "economically distressed," due to growth in its jobless rate during the pandemic. 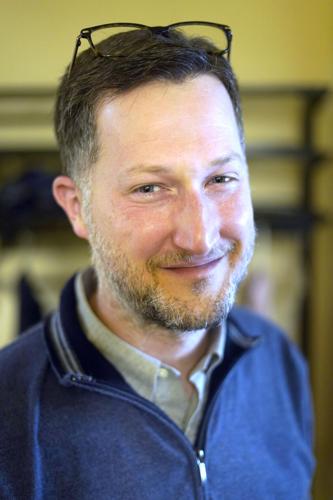 Christopher J. Ketchen, the Lenox town manager, said he expects the tourism trade to pick up this year.  “Tourism-related businesses were hit first and hardest over the course of the pandemic. Those numbers have had a chance to build up.” 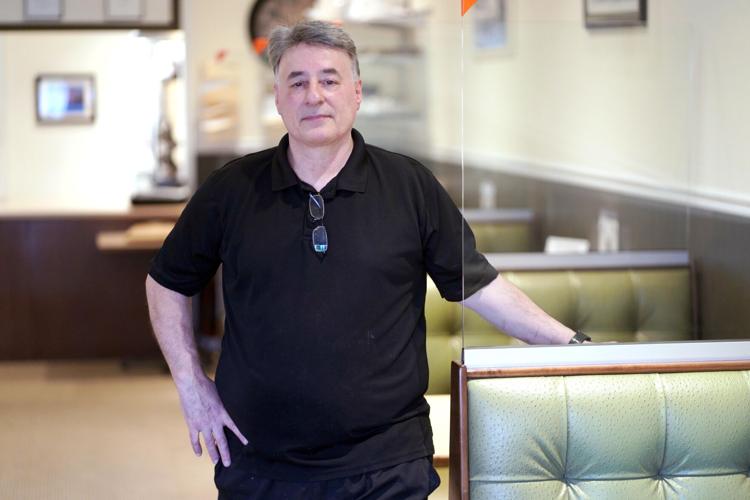 Peter Lepotakis is the owner of Electra's Cafe in Lenox, named for his grandmother. The pandemic forced him to confront rising food prices and to adjust his hours due to staffing shortages. 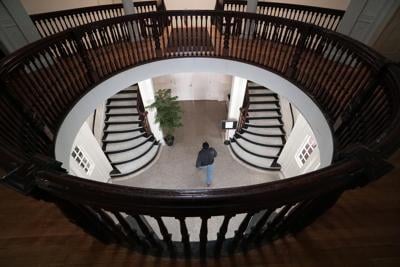 LENOX — It’s official: Lenox is an “economically distressed” community. So is nearby Hinsdale, and even Becket, all three of which join Pittsfield, Adams and North Adams on a list kept by the Economic Development Administration, a federal government agency.

How these three relatively affluent Berkshire County towns got that designation — earning them a splash of red on a map produced by the Berkshire Regional Planning Commission — will be one of the pandemic’s weirdest footnotes. And yet it’s one worth pausing to consider, because it shows how the pandemic’s economic fallout has threaded its way into even a place like Lenox, home of a school mascot, the “Millionaires,” that refers back to the Gilded Age.

Spoiler alert: Lenox is doing just fine, economically, as a community. It regularly secures a AAA grade on its credit worthiness, the highest possible, from S&P Global Ratings, enabling it to borrow at the lowest possible interest rates. Household incomes are among the highest in the state and it has benefited from a flow of meals and rooms taxes and from revenues produced by relatively high property values.

But enough households in Lenox have felt the pinch, due to job losses in a tourism-centric economy, to push the jobless rate up to a level that put the community on the federal list.

“It does speak to the breadth of the impact,” Laura Brennan, the planning commission’s economic development program manager, told me, referring to the pandemic. “In my time, I’ve never seen Lenox on the list, and I’ve never seen Hinsdale on the list. It’s surprising to see either of them.”

The towns are listed as distressed because their unemployment rates over 24 months are more than 1 percent higher than the national average. The EDA considers a worker’s home town, not where the job happens.

In November 2020, 8.6 percent of Lenox residents were out of work, nearly 2 percent higher than the U.S. unemployment rate that month of 6.7 percent. The picture has improved in Lenox and in the country as a whole. But the town still led the federal jobless rate this past November by 2 percentage points: 6.2 in Lenox; 4.2 nationally.

That same month, the unemployment rate was 8.7 percent in Becket and 8.2 percent in Hinsdale.

Granted, percentages can be misleading when the numbers are small. In Lenox, 155 people were counted as unemployed in November 2020; that total fell to 110 this past November.

This footnote deserves its own footnote. It appears that more workers in the region’s hospitality industry live in Lenox than generally thought. I tested that theory with a few people and they agreed it’s plausible.

My colleague Ben Garver and I walked around for a bit in Lenox center Friday to see what people think of this place being listed as economically distressed.

I met Ben on Housatonic Street. “So this is a MOS?” he asked. That’s newsroom shorthand for “man on the street” interviewing. (Forgive the gender bias, but once it gets into an acronym, it’s at least whittled down to a single letter.)

Lenox’s streets were pretty quiet, and cold, but I had the chance a half dozen times to explain the statistical oddity that brought us to town.

Jenn Berkel just laughed. She was behind the counter at her What a Gift shop, working alongside her daughter, Hannah. Berkel lives in Pittsfield and started her store three years ago, initially on Church Street, after Village Gifts closed. She moved in April to a location at 68 Main St., more visible from the main drag, and across from Nejaime’s Wine Cellars.

Bottom line: She’s not feeling any particular “distress” in Lenox, in fact the opposite. “Just being here, it’s taken off,” she said of the new location. “I’m building the repeat local customer.”

And yet. Retail commerce, anywhere, exists in its own little terrarium of distress, as everyone knows. She believes in catering to year-round residents, not the tourist trade.

“I’m worried about sustainability for my business. My margins are thin. Many prices are going to have to go up, and that’s not ideal,” she told us, as Hannah helped a customer.

We found Christopher J. Ketchen, the Lenox town manager, up in Town Hall speaking with someone in the Select Board’s meeting room. We lurked around visibly enough to get him to come out for a minute. I’d left him a phone message earlier, saying I wanted to speak with him about the “economically distressed” listing.

Yeah, he said. He’d gotten my message. I think he referred to it as my “somewhat dire” message. We agreed to talk later.

“It’s just one data point,” Ketchen told me over the phone – and he’s right, of course.

“This statistic is coterminous with a pandemic in a hospitality-based town,” he said. “Tourism-related businesses were hit first and hardest over the course of the pandemic. Those numbers have had a chance to build up.”

A recent set of findings from the Census Bureau’s American Community Survey listed Lenox, with a per capita income of $36,094, at 124th out of the state’s 351 municipalities – behind only Stockbridge, Becket, Monterey and West Stockbridge in Berkshire County, and well ahead of Pittsfield ($26,304) and North Adams ($21,263).

Both Ketchen and Jenn Nacht, executive director of the Lenox Chamber of Commerce, believe the town will rebound this year. Last week, Tanglewood, the summer home of the Boston Symphony Orchestra, announced its schedule for this year, as the music tourism mecca aims to put the pandemic behind it.

“We would expect to be in a very different posture six months from now,” Ketchen said.

Nacht said that with Tanglewood out of commission in 2020, and then only partially back in 2021, the town felt the impact. Hotels and resorts, like Kripalu, cut back on staff. Quite a few major hospitality properties in Lenox changed hands, she notes, and some, like Blantyre, closed for renovations. Summer camps had trouble hiring.

“It does seem strange that our unemployment rate would be so high,” Nacht said. “That’s the ripple effect. We’re so tied to the summer season.”

How the pandemic pushed a party mom, a nature lover and a gardener to reinvent their Berkshire work lives

The Lenox Library is always worth a trip when in town, but it was quiet after an initial morning rush. Jim Spaulding of Egremont, who was working the front desk, heard me out on the story angle.

Yes, that’s surprising, he said. “Just because of the reputation and the people that I know,” he said.

Over at Lenox Coffee, at 52 Main St., manager Jenna Marchione was kind enough to let us pester some of her customers.

Fran and Charlene Reardon of Pittsfield, are regulars. They like the place because it’s roomy and, on this morning, sunlit. It is their go-to brunch destination. One table away, Linda Morse and Dorothea Greene, of Richmond, were reading the paper.

I shared the news with the four of them that the federal government had listed Lenox as economically distressed. I backed up from that data point and asked everyone how the economy, more generally, seemed to be faring.

Morse said she’s concerned about the slow toll being taken in the retail sector, and worries that some businesses may not rebound. She mentioned places she once passed or visited, now questionable.

“They’re all shut down, and it’s clear they’re not coming back. It feels like things are changing. It doesn’t feel seasonal. It feels permanent,” Morse said. “The tourist market is bound to be affected.”

We got talking about the trouble places have hiring. I’d been speaking with Brennan, at the planning commission, about the fact that even without the pandemic, the Berkshires would be seeing a workforce gap now simply because of the high number of workers close to retirement age.

Morse was quiet for a bit, then seemed to suggest that people have their own reasons for leaving the workforce. “I can’t believe that they’re plump and happy and just sitting around,” she said.

The erosion in the commercial landscape troubles everyone we met Friday.

Charlene and her husband Fran, a longtime teacher and coach at Wahconah Regional High School, now retired, like to get out. They’re local, and loyal.

“We go home and feel like we’ve done something,” Charlene Reardon said, of the couple’s trips out and about. But the Reardons are not doing all the things they’d normally be up to. The pandemic has kept them away from trips south, which they’ve enjoyed.

“It’s really put a damper on the stuff that you like doing,” Fran Rearson said.

Marchione, the shop’s manager, said she’s noticed that lots of small cafes were closed even during a normally busy holiday season. “If one key person gets COVID, the whole restaurant has to shut down.”

While Lenox may not be economically distressed for long, from where Marchione stands, her line of work continues to sweat bullets.

“It’s just really stiff competition for employees right now. If people can make more money at another location, I don’t blame them,” Marchione said. “These restaurants just can’t seem to catch a break.”

On the way back to Pittsfield, Ben and I stopped to visit, unannounced of course, with Peter Lepotakis, owner of Electra’s Cafe on Route 7 in Lenox. Lepotakis is a veteran of the Berkshire restaurant industry.

He came out of the kitchen, late in the lunch hour, to catch us up on the challenges he faces. They include trouble finding workers and rising food costs. He had to trim the cafe’s hours.

The “distress” listing for Lenox didn’t seem to surprise him. Then again, it’s just a statistic. His problem isn’t that too many people are out of work. It’s that he struggles to hire enough people to keep his cafe going.

“The help I have is dictating the hours I’m open,” he said. “I deal with it the best I can. I have a saying. ‘I don’t know anything anymore.’ I just deal with everything coming my way.”

It took a decade, but a federal agency now says Berkshire County deserves a special push to grow its economy, opening access to new investment that could bring jobs.