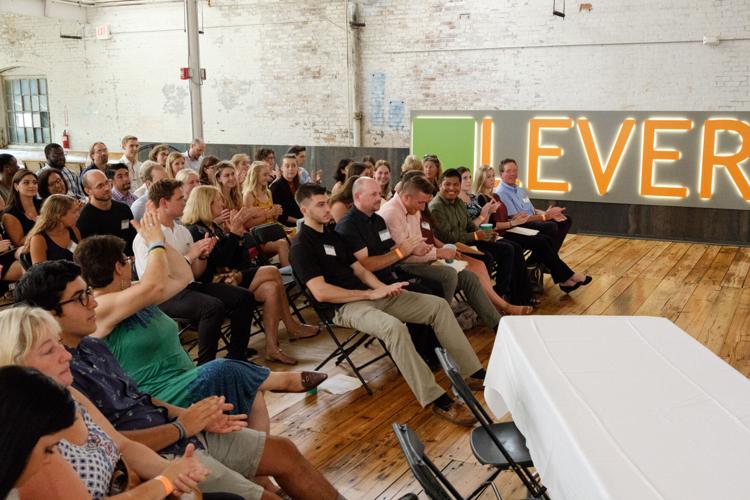 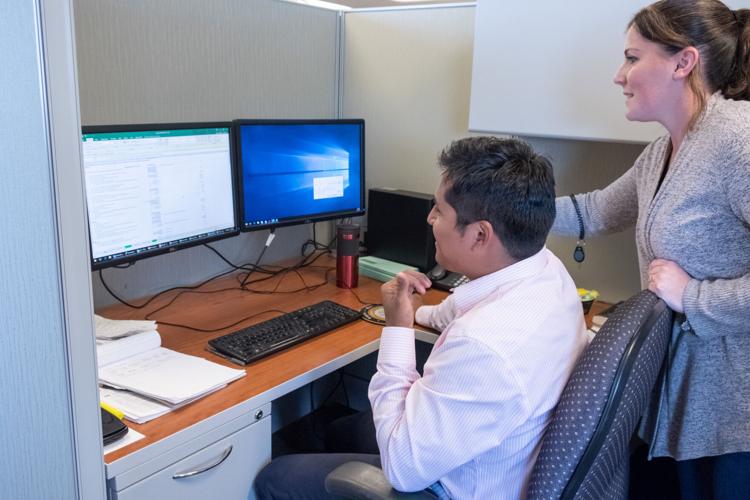 Berkshire Bank Supervisor Katie Kirby reviews financial spreadsheets with Enrique Bouvier, a member of Lever's Berkshire Interns program. Ten members of the program have found full-time jobs in the Berkshires since Lever began the initiative four years ago, according to Lever Workforce Programs Manager Jade Schnauber, who is one of them.

NORTH ADAMS — It has become a familiar refrain, and Jeffrey Thomas hears it constantly when speaking with local employers.

“Everybody we talk to says, ‘I can’t get people on the line,’” Thomas said.

He is referring to the staffing shortage exacerbated by the COVID-19 pandemic that has handcuffed so many Berkshire employers. The head of one Pittsfield manufacturer has been difficult to reach recently, and one reason, Thomas said, is because he is working on the factory floor.

Thomas is executive director of the small-business accelerator Lever, and he is hoping that his company’s college internship program, known as Berkshire Interns, might be able to make up for some of these persistent local staffing shortages as the year progresses. The Berkshire Interns program provides college students with 10-week paid summer internships with local employers.

Lever began placing interns with Berkshire employers in 2018, and two recent expansions to the program, Berkshire Entry and I2P2, the company’s Inclusive Internship Preparation Program, are designed to bring more qualified and diversified talent into the local workforce.

Lever started both initiatives before the coronavirus pandemic hit, but Thomas believes that they might be more relevant now, given the current economic circumstances.

“We do think that employers should be looking more strongly at internships as a way to build their employee pipeline,” Thomas said. “We think, given the shortage that we see right now, it’s a better idea than ever.”

Berkshire Interns makes sense for smaller companies that are trying to fill staff shortages and do not have the hiring resources that some of Berkshire County’s bigger employers do, Thomas said.

“A company that doesn’t need Berkshire Interns much is General Dynamics,” Thomas said. “But, companies like LTI [Smart Glass] or Cord Master or Boyd Technologies, these are smaller companies that don’t have the resources to recruit [college] students on campuses themselves. We’ve built a whole infrastructure that has been effective in getting students on campus.”

Berkshire Interns placed 25 college students in internships last summer, and it hopes to place at least 35 this year and could “easily handle 45,” according to Schnauber.

Ten members of the Berkshire Interns program have found full-time jobs in the Berkshires since Lever began the initiative four years ago, according to Schnauber, who is one of them.

Schnauber, a Pittsfield native who once served as a ski instructor at Bousquet Mountain Ski Area, interned at Lever in summer 2018 and summer 2019, while attending the Massachusetts College of Liberal Arts, before landing a full-time position with the company. She graduated from MCLA in 2020, with a degree in sociology. Many of the participants haven’t found full-time employment yet because they are attending school, Thomas said.

MountainOne Financial Partners has participated in the Berkshire Interns program since it began and is helping to finance the I2P2 initiative, according Kelli Kozak, the company’s vice president of community engagement. One former MountainOne intern, Avril Levesque, is now Lever’s communications manager. Kozak referred to Lever’s Berkshire Interns program as a “good fit” for local employers.

“I’ve been part of the training program that they do ... roundtables and panels and training, and that’s been super helpful,” she said.

Berkshire Interns is available to students in more than 140 colleges across the country, with the priority placed on schools located on the East Coast. According to Thomas, two-thirds of the students who have received internships during the program’s first four years originally are from Berkshire County, but many who do not have local ties have applied.

The I2P2 internship program that Schnauber founded is entering its second year. It is targeted toward members of underrepresented communities, such as people of color or the LGBT community. Schnauber thought it would be a good idea to form a program that would target those communities, in order to give them chances at internships that they might never have known existed.

“I think any program that supports diversity, equity, inclusion and belonging is great,” Kozak said.