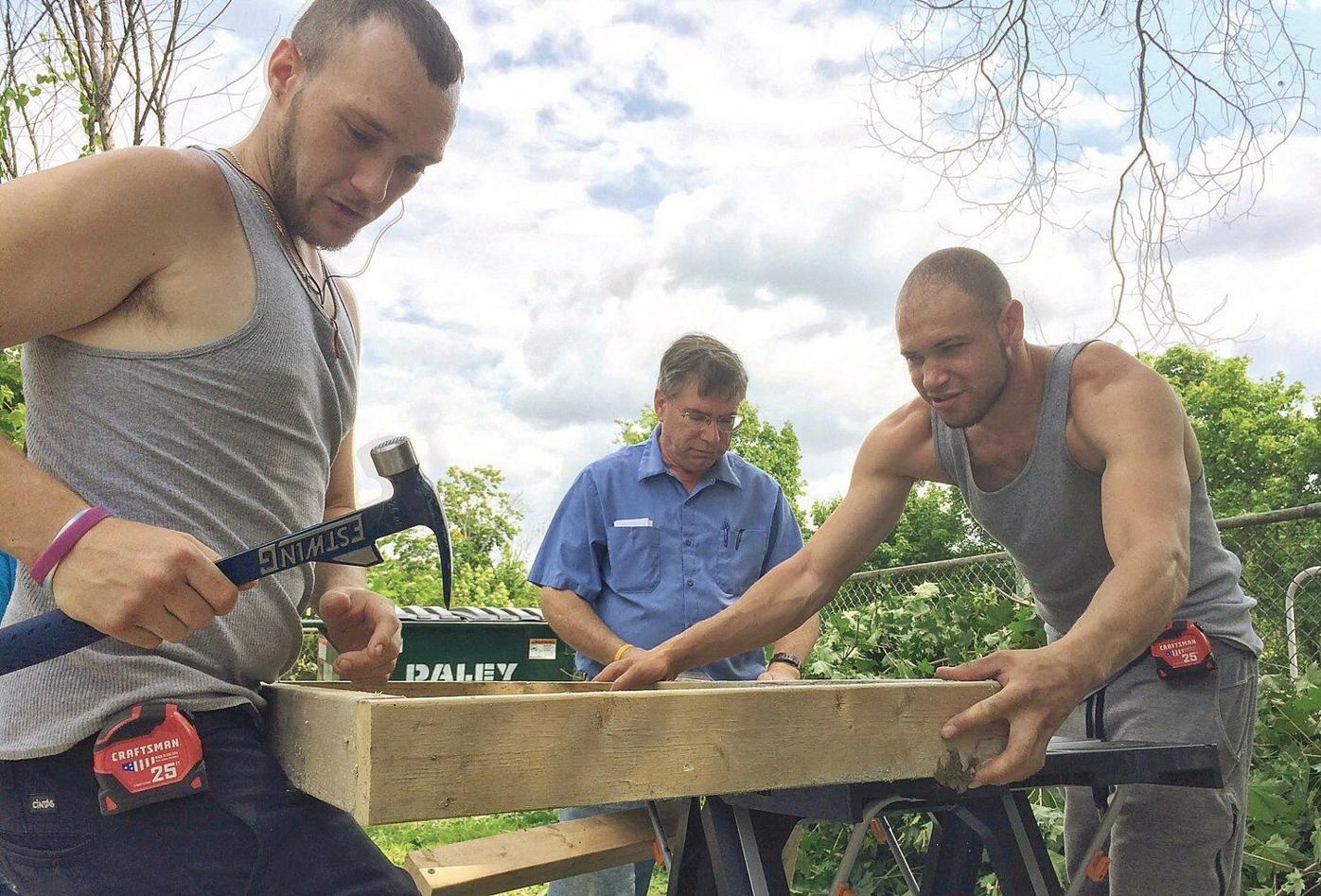 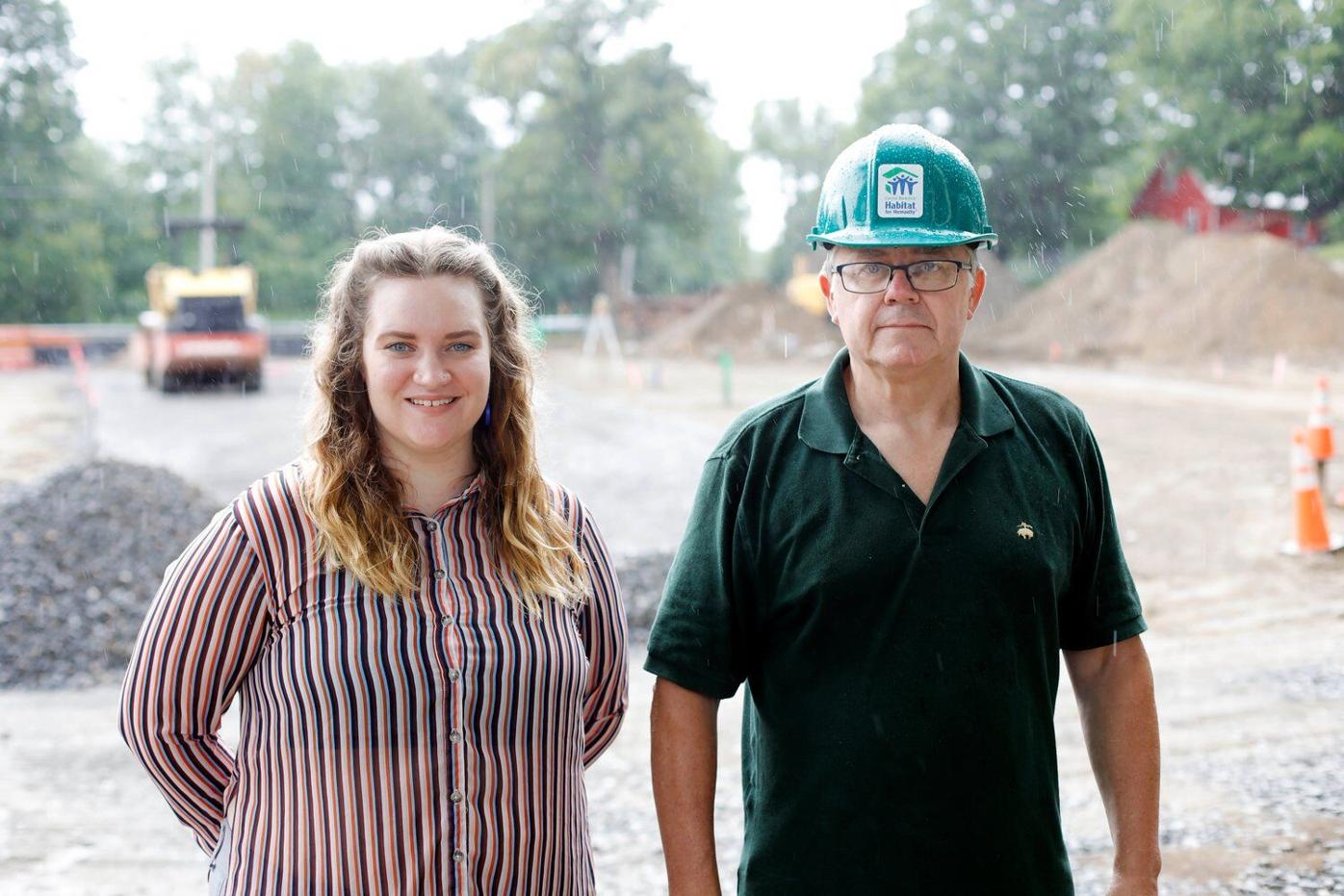 STEPHANIE ZOLLSHAN - THE BERKSHIRE EAGLECentral Berkshire Habitat for Humanity Construction Services Director Thomas Meyer and Hannah Ferguson, the director of an upcoming Habitat program that will offer on-site construction and trade training to a group of residents, at the organization's largest building project on Deming and Gordon streets in Pittsfield. 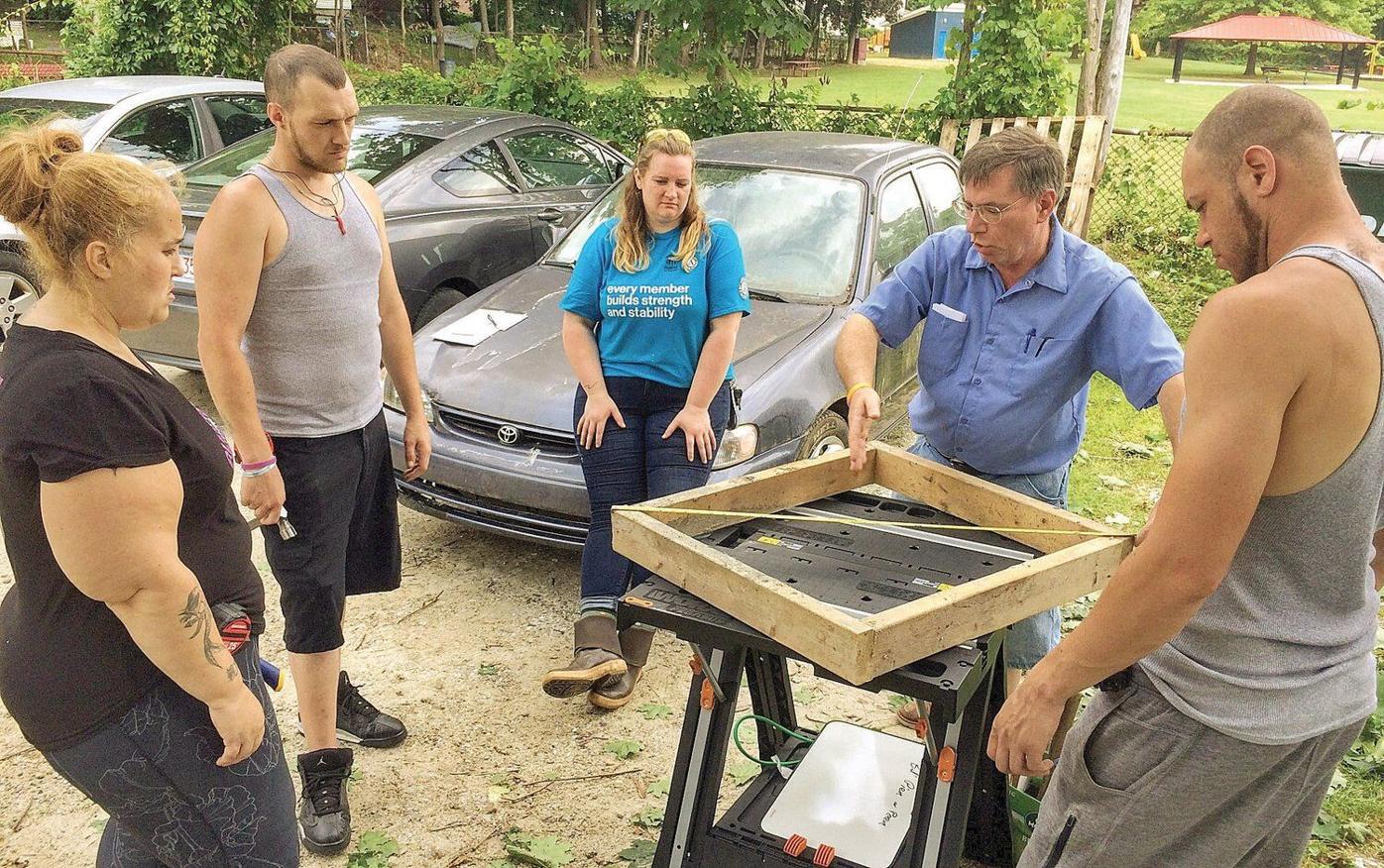 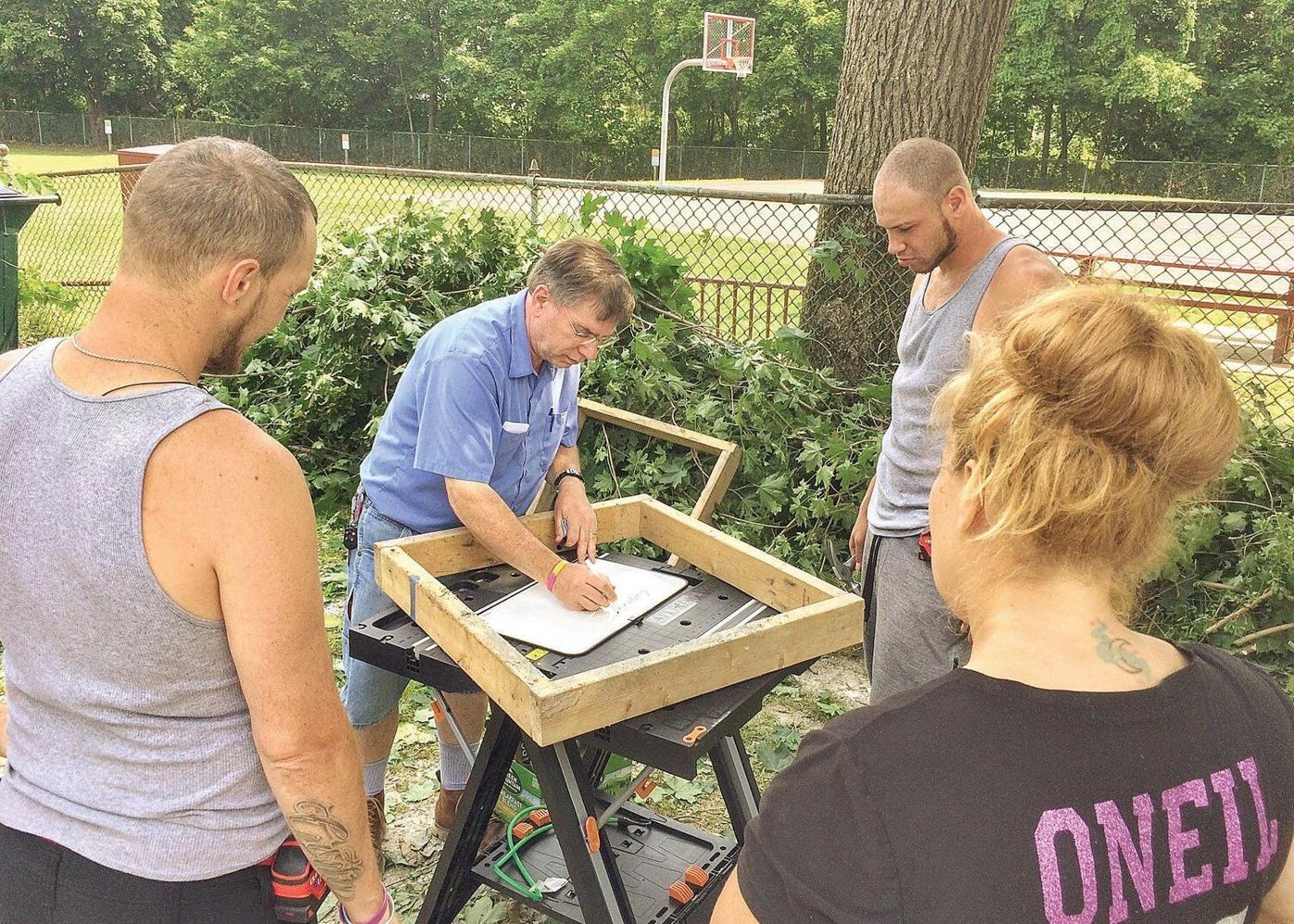 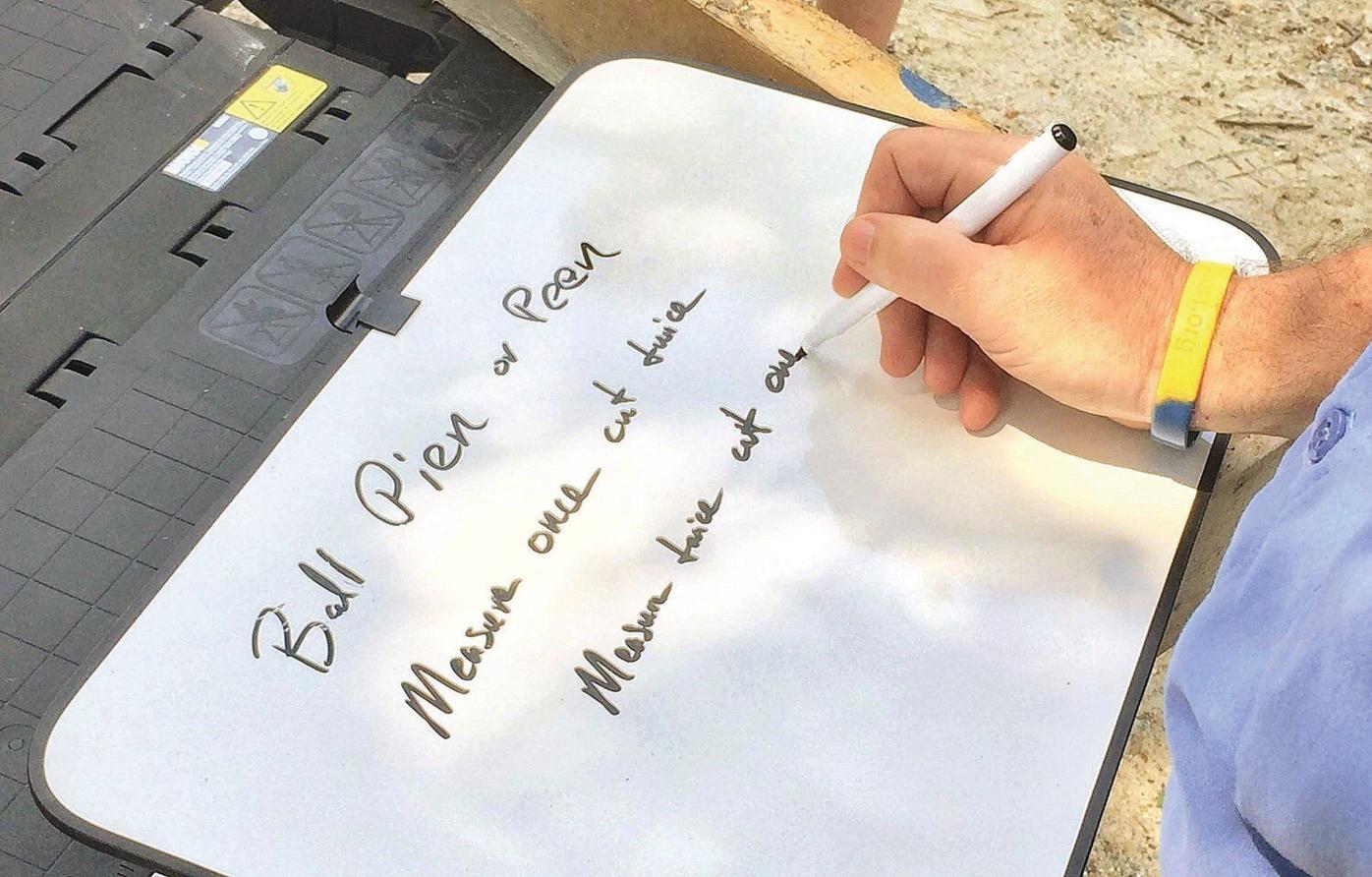 Instructor Ed Kinsella writes a carpentry maxim during a training session at Habitat for Humanity. "Measure once cut twice. Measure twice cut once," it reads. 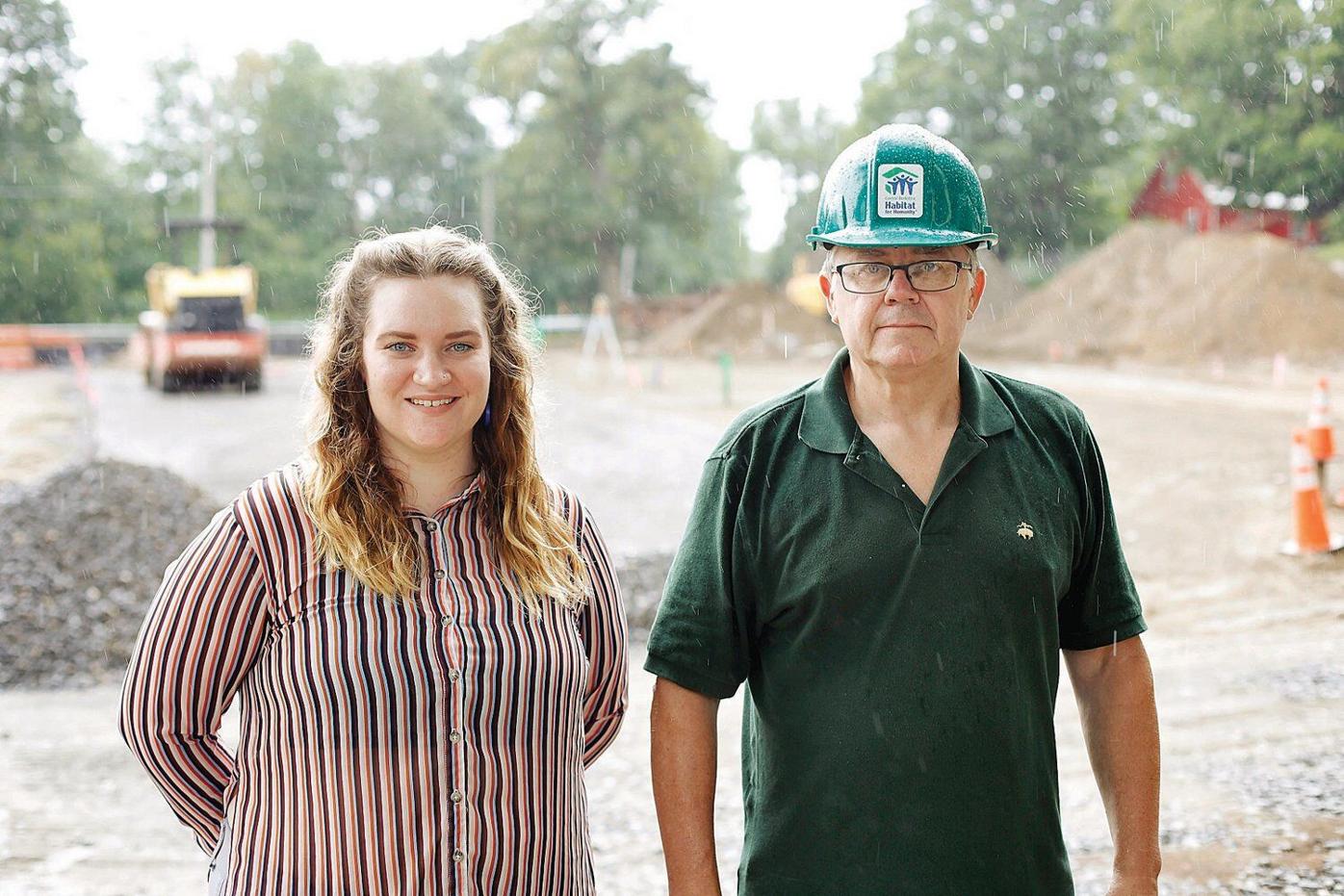 STEPHANIE ZOLLSHAN - THE BERKSHIRE EAGLECentral Berkshire Habitat for Humanity Construction Services Director Thomas Meyer stands with Ferguson, the director of an upcoming Habitat program that will offer on-site construction and trade training to a group of residents at the organization's largest building project, on Deming and Gordon streets in Pittsfield. 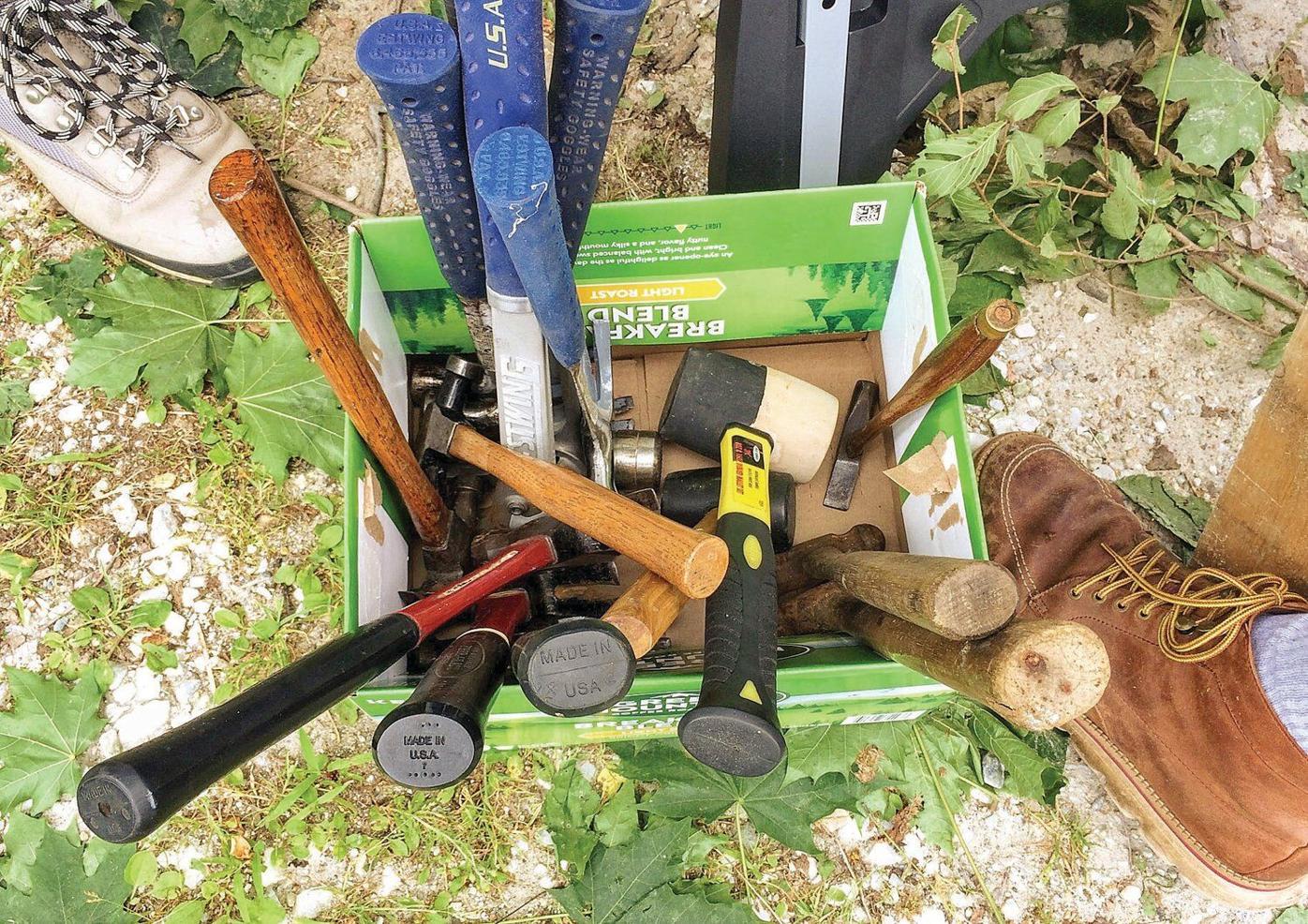 Tools sit ready for use during a class on building trades techniques led by longtime Habitat for Humanity volunteer Ed Kinsella of Dalton, a retired electrical engineer.

STEPHANIE ZOLLSHAN - THE BERKSHIRE EAGLECentral Berkshire Habitat for Humanity Construction Services Director Thomas Meyer and Hannah Ferguson, the director of an upcoming Habitat program that will offer on-site construction and trade training to a group of residents, at the organization's largest building project on Deming and Gordon streets in Pittsfield.

Instructor Ed Kinsella writes a carpentry maxim during a training session at Habitat for Humanity. "Measure once cut twice. Measure twice cut once," it reads.

STEPHANIE ZOLLSHAN - THE BERKSHIRE EAGLECentral Berkshire Habitat for Humanity Construction Services Director Thomas Meyer stands with Ferguson, the director of an upcoming Habitat program that will offer on-site construction and trade training to a group of residents at the organization's largest building project, on Deming and Gordon streets in Pittsfield.

Tools sit ready for use during a class on building trades techniques led by longtime Habitat for Humanity volunteer Ed Kinsella of Dalton, a retired electrical engineer.

PITTSFIELD — For a decade, land in a Pittsfield neighborhood donated to Central Berkshire Habitat for Humanity awaited its future, as volunteers with the nonprofit busied themselves with other projects.

Today, as machines crawl about the corner of Deming and Gordon streets, what's happening here could prove a turning point — and not just for those who will occupy housing that's soon to rise.

For the first time, the local Habitat chapter will use one of its building sites to prepare Berkshires residents for regular work in the construction trades, fashioning a new way to help economically disadvantaged people.

Carolyn Valli, Habitat's chief executive officer, believes the pilot program can provide a career boost for participants and widen the pool of available construction laborers — a traditional entry point for work that pays far more than minimum wage. If all goes well with the pilot program, a second group of trainees will be recruited for a session in early 2020.

The first seven members of the new Habitat Build and Repair Corps began their training last week. Over the next half-year, the five men and two women, recruited from disadvantaged neighborhoods like the city's West Side, will be coached by a crew of professional builders and Habitat staffers in essential job-site skills, from reading blueprints and tape measures to using construction software known as Procore.

Unemployment percentages remain in the double digits on the West Side, Valli said. "We looked for people who were unemployed, obviously," she said of steps her group took to assemble its inaugural class.

Tale of the tape

Last Wednesday, three days into the program, volunteer instructor Ed Kinsella, of Dalton, led a workshop on tool techniques. The retired electrical engineer set up a portable workbench in shade behind Habitat's Columbus Avenue office. Students gathered around, all but the one who bowed out after having a bad reaction to a bee sting while removing brush.

"If you start wrong, you're going to pay for it forever," Kinsella told the group, referring to measurements made in error. "You'll be chasing that around for the whole job."

For participants, the 35-hour-a-week training offers a financial leg up, as well as a chance to reboot.

Breana O'Neil says she joined to restart her connection to the building trades, after having worked for a time as a constructor laborer, then switching to home health care. But that work didn't pay as well and O'Neil is a single mom with two children.

"To better my life, for me and my kids," O'Neil said, when asked why she signed up. "I like doing stuff like this."

On top of that, O'Neil and a brother plan to eventually take over their father Pat's business, New England Stone Masonry. She plans to study for a contractor's license starting next month.

Dustin Hanford helped Kinsella demonstrate use of a special hammer, dusting off skills gained from several years on roofing and siding jobs.

At 32, Hanford says he felt too much like a "jack of all trades and master of none," he said. "It's an opportunity that I'm not going to have much longer. A fresh start on a new career."

Another participant, Richard Walden, 28, came for the skills. "To learn a little bit about construction," he said of his reasons for joining. "To give me the lessons to know what I need in the real job."

Kinsella, the group's instructor for part of Wednesday's training, believes the new Habitat program fills a need in what he called a fast-paced world where companies are increasingly less likely to want to train new hires.

"We've become a 24/7 society and want a quick response," he said. "I think this program is going to do well."

Lou Allegrone, a Habitat board member who runs Allegrone Construction Co. of Pittsfield, said the new program could provide a path to careers in the trades.

"Those basic trade skills really are required," he said. "This program could potentially prep these trainees for an apprenticeship with our company or other companies."

Pay isn't just a concept. All trainees are earning $13 a hour, paid out of grant funding obtained by Habitat, according to Hannah Ferguson, an Americorps worker now finishing her second year with that national program and about to become the local Habitat chapter's repair program and workforce development coordinator.

Along with gaining skills, participants are expected to develop life skills, including the discipline of showing up on time. That's not easy on construction sites — where crews are expected at 6 a.m. — particularly for parents with young children.

While training kicked off in a backyard, the program will ratchet up to reality when it brings participants to the Gordon and Deming streets site, near a stretch of the East Branch of the Housatonic River off Elm Street.

That's where Habitat and its partners are about to erect six new four-bedroom homes on land donated years ago by Berkshire Gas.

Neighbors have heard the rumble of heavy equipment for months, as essential infrastructure like water and sewer lines has been installed, paid for through a $425,000 grant received in 2018 from the state MassWorks program. The city of Pittsfield administered the grant. Justine Dodds, a program manager in the city's Community Development office, used the municipal bidding process to find contractors.

The site is now a fresh slate, ready for action. "That's a big thing for us," Valli said the site work underwritten by the grant.

Of the three duplex buildings planned, one will be the special responsibility of the Habitat Build and Repair Corps, Valli said, giving participants a hands-on project that can lock down their comfort with this kind of work.

"So they can see what it's like to put that stud wall up," she said.

It has long been the Habitat custom to pair raw recruits with experts from the building trades. In that sense, Habitat chapters around the U.S. have been in the training business for decades -- at least for their volunteers.

But the new Habitat Build and Repair Corps puts starch in that concept by stepping up the level of training and by reaching out to people who might not have considered helping Habitat -- or found a path toward work in construction.

The local program is one of just three in the United States, according to Ferguson. Others are linked to Habitat chapters in Baltimore and the Greeley, Colo., area.

"People want to build a better life for themselves and make themselves more employable," she said. "A lot of people in construction start out as laborers. There's nobody going into the trades, really."

Recent help-wanted advertising in the area listed openings for laborers for jobs paying $18 an hour and more. The trainees working with the Habitat project will along the way obtain a credential that can help them land jobs: a certification that they have completed a 30-hour course in job site safety devised by the federal Occupational Safety and Health Administration.

Two of the three duplexes on the Gordon and Deming streets lot will rise in a big hurry. That's because Habitat is teaming up with Allegrone Construction for what's known as a Home Builders Blitz.

In the course of a week, starting Sept. 7, a team with Allegrone will rally volunteers from the local ranks of professional builders and put up two of the new buildings in Pittsfield. Normally, Habitat projects take nine to 15 months to complete.

"This gives us an opportunity to jump start that," Valli said of the building blitz.

Allegrone said his construction company's mission includes support for Habitat. For the Gordon and Deming project, volunteers who work with Berkshire Bank have already built sections of exterior wall. Having those panels ready will help ensure the "blitz" succeeds.

That and getting other builders to sign on, Allegrone said. "Otherwise, how are we going to pull it off?" he asked with a laugh. "This will be a fast build with professional builders."

His brother Anthony, an architect, designed the duplexes that will go up, then modified the plans to allow for "panelization" of walls ahead of time.

While the blitz will erect two of the three duplexes, the third will be erected by the new workforce development squad and another, unrelated team of women in the trades.

Allegrone said the two buildings that will rise in September can serve as models for members of the Habitat Build and Repair Corps working on the third. "Those two buildings will set the stage for training," he said.

Getting the new homes up quickly answers a need.

Habitat chose to build the four-bedroom homes because families in the rental market find it hard in the Pittsfield area to find affordable homes that can accommodate large families. The agency is still recruiting families to occupy the new units. To learn about how to apply, call Habitat at 413-442-3181.

Along with providing space for larger families, including perhaps multigenerational ones, the new homes will be designed to have no net use of energy and for that reason be less costly to run, Valli said. By design, their floor plans will be "age friendly" to better accommodate people as they get older.