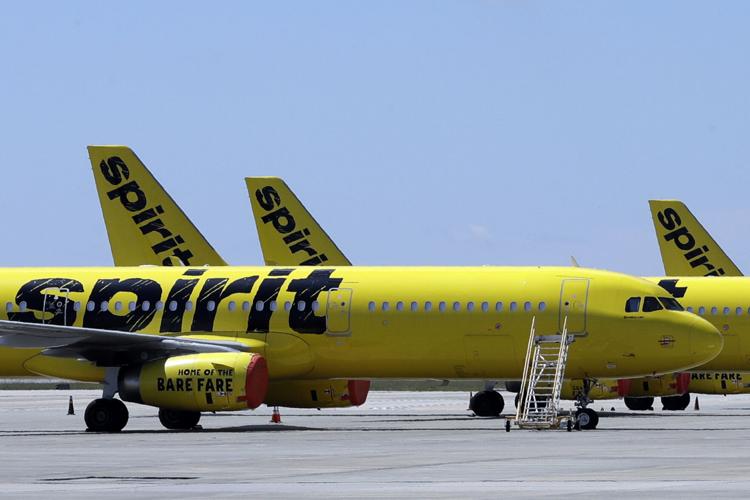 Shareholders of Spirit Airlines will vote July 8 on a proposed merger with Frontier Airlines, and the outcome could affect fares for millions of air travelers who depend on the budget airlines. 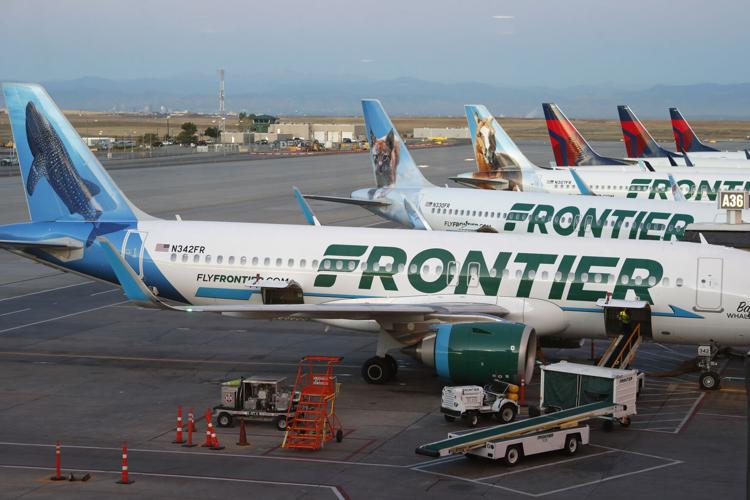 Frontier Airlines could soon own Spirit Airlines as budget flight companies jockey for position in the market. If the sale falls through, JetBlue could step in to buy Spirit.

Shareholders of Spirit Airlines will vote July 8 on a proposed merger with Frontier Airlines, and the outcome could affect fares for millions of air travelers who depend on the budget airlines.

Frontier Airlines could soon own Spirit Airlines as budget flight companies jockey for position in the market. If the sale falls through, JetBlue could step in to buy Spirit.

DALLAS (AP) — The prospect of a takeover of Spirit Airlines threatens to upend the cheap-fare end of the industry much like a series of mergers among big airlines reduced choices for travelers.

Spirit is the largest budget airline in the United States, but its days as a stand-alone company appear numbered. The big question is whether it is sold to fellow discounter Frontier Airlines or to JetBlue, which operates more like the four giants that dominate the U.S. airline business.

Late Wednesday, Spirit delayed a shareholder vote on a merger with Frontier from Thursday until July 8. Spirit said it would use the extra time to continue talking with Frontier and JetBlue Airways about their rival bids for Spirit.

The outcome could determine how many choices travelers have for the lowest fares. That's particularly important to leisure customers, the group that Spirit targets.

JetBlue says its all-cash offer is financially superior. Frontier argues that its proposal will be better for Spirit shareholders in the long run, assuming that airline stocks recover to pre-pandemic levels.

Both covet Spirit because of its relatively young fleet of more than 170 planes and its roughly 3,000 pilots — even more valuable during a pilot shortage that could last most of this decade.

Antitrust regulators are sure to examine either deal closely. Frontier and JetBlue both claim that consumers will benefit if they win the Spirit sweepstakes. A Frontier-Spirit combination would operate about 5% of the nation’s flights, and JetBlue plus Spirit would operate more than 7%, based on July schedules, making either one a stronger competitor to American, United, Delta and Southwest.

People who follow the industry closely are divided over which deal would help consumers more. Those who prefer a Frontier-Spirit deal point out that both are “ultra low-cost carriers" that charge rock-bottom fares — although they add many fees. They say JetBlue has become too much like the bigger airlines.

“You end up either with another big, high-cost, regular-fare airline (with JetBlue), or you end up with a truly nationwide ultra-low-cost-carrier that's twice the size of anything today," says Robert Mann, a longtime airline executive and consultant. Consumers, he said, “should be looking for continuation of a true low-fare, austere environment with the Spirit-Frontier combination."

Scott Keyes, the founder of Scott’s Cheap Flights travel site, doesn't like either deal, “but I like the JetBlue option even less.”

Keyes said removing a competitor always tends to push up fares, but the impact won't be as bad if the buyer is another budget airline like Frontier.

“Even if you never fly Spirit or Frontier, you still owe them a debt of gratitude for causing your Delta or American flight to be cheaper than it would be otherwise,” he said.

Spooked by the growth of the discount airlines, bigger carriers started to sell “Basic Economy” fares in recent years, although they limit the number of bargain-bin seats on each flight.

JetBlue CEO Robin Hayes counters with a decade-old study by MIT researchers who found that JetBlue flying a particular route did more to reduce prices than did service by budget airlines, which account for a small portion of the market. He has taken to calling it “the JetBlue effect.”

Michael Linenberg, an airline analyst for Deutsche Bank, said if JetBlue succeeds in buying Spirit, some of the cheapest fares might go away, but a bigger JetBlue could replace them with seats that appeal to other kinds of travelers. He pointed to JetBlue's “Mint” business-class service, which has been so successful on transcontinental flights that it forced bigger rivals to cut prices on their premium seats.

“It’s not all about catering to people who want to pay $29 or $59 fares. There are passenger segments that JetBlue will serve that Frontier and Spirit do not,” Linenberg said. “There are going to be lots of seats out there, and it’s not like JetBlue will stop offering low fares.”

Savanthi Syth, an airline analyst for Raymond James & Associates, said any loss of cheap seats after a JetBlue-Spirit deal will be temporary because other budget carriers — notably including Frontier — will grow.

“Frontier has the order book (for new planes) to step in and pick up what Spirit leaves behind,” she said.

It’s even harder to predict whether a Spirit sale will make much difference in customer service.

Spirit had the highest rate of consumer complaints to the government in the latest figures from the Transportation Department, covering April, and has finished at the bottom five of the last seven years.

Neither would-be buyer seems likely to improve Spirit’s poor record. Frontier had the worst complaint rate the other two years, and JetBlue’s rate last year was higher than everyone except Spirit and Frontier.

Several mergers between 2008 and 2013 — Delta bought Northwest, United absorbed Continental, Southwest bought rival low-cost carrier AirTran, and American and US Airways combined — left four airlines in control of 80% of the U.S. market and ushered in several years of airfares rising faster than inflation. The pace of consolidation then slowed, with only one major deal, Alaska Airlines' 2016 acquisition of Virgin America.

Airline industry officials believe that that antitrust regulators would prevent American, United, Delta or Southwest from snapping up any rivals, but that doesn't rule out further consolidation. Some analysts say a merger of JetBlue on the East Coast and Alaska in the West would make sense. Smaller players Allegiant Air, Sun Country and startups Avelo and Breeze could become takeover targets at some point.

“In the ultra-low-cost space, we probably have too many players. I think we will see consolidation,” said Linenberg, the Deutsche Bank analyst. “Do we need eight or nine or 10 airlines flying from New York to Fort Lauderdale?"