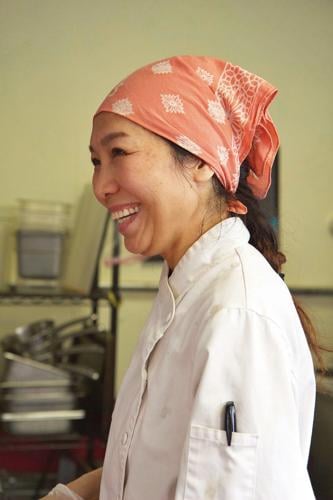 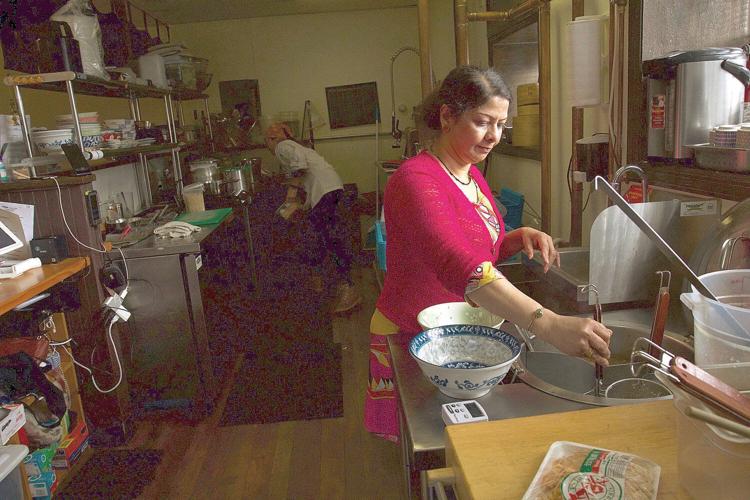 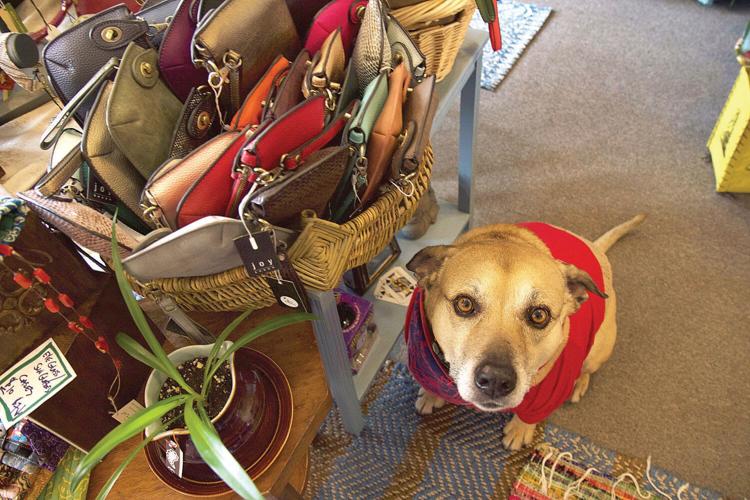 Ace the shop dog sits by a group of purses inside Birdsong Gallery in North Adams. 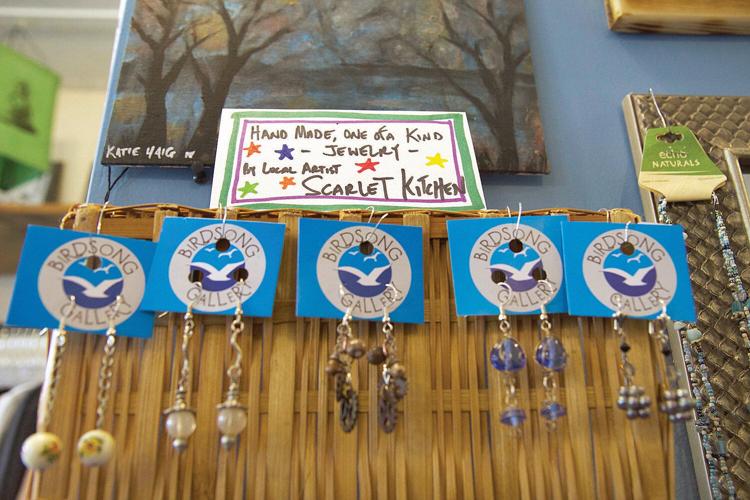 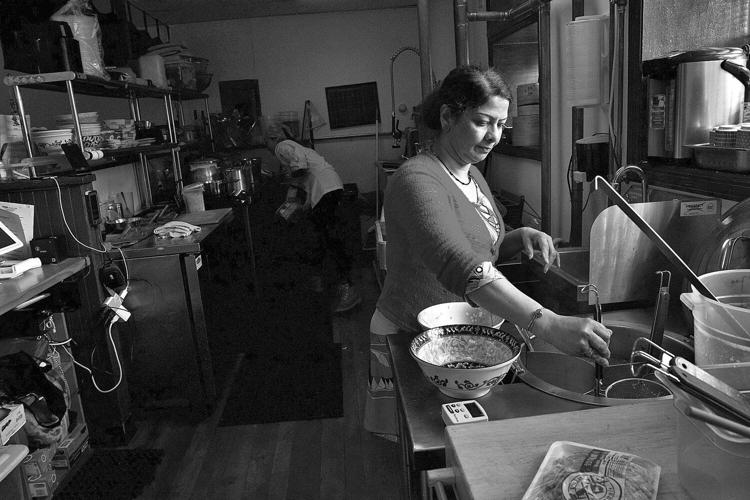 Ace the shop dog sits by a group of purses inside Birdsong Gallery in North Adams.

A couple fleeing Hurricane Irma. A green initiatives developer who saw an opportunity. Young people who want to be their own bosses. Women who recognized a missing niche — and the perfect space to pursue their passions.

These are some of Berkshire County's freshest business owners. According to data provided by 31 of the county's 32 town and city clerks, about 500 new businesses opened in 2018. Here's a sampling of six of them.

After Hurricane Irma swirled through the Florida Keys and destroyed both their home and their yacht maintenance company in 2017, couple Juliette and Christian Brindel, ages 39 and 48, literally threw a dart at a map. Christian aimed for America's west coast. Juliette hit Stockbridge.

They drove up to Massachusetts to take a look around, and that's when they wandered into North County. "We kind of fell in love with this weird North Adams area," Christian said.

The Brindels opened up their Eagle Street store, Birdsong Gallery, in August.

"It's very off the cuff," Christian said. Among the products the couple sells are pieces of local art, fair trade trinkets, jewelry, purses, women's clothing and plants potted in recycled mugs and teapots. In the back there's a room just for Christian's (for-sale) vintage guitar collection, and the space also hosts music lessons several times a week.

"We just see things that we enjoy and that we're interested in, and we like to bring it to everyone else," Juliette said.

Boston green initiatives developer Ofer Zaarur, 53, had never owned a motel before he bought the foreclosed-upon Becket Motel last June. But with help from the SCORE Association, a nonprofit that offers free business expertise, Zaarur said he's in the process of making the Becket Motel a green business pilot project.

"The goal is really to take something that was designed back then when energy was not a concern and bring [it] into a new generation that's more sustainable," Zaarur said. "We're putting all this technology into the motel to reduce costs and manage it properly."

This spring, Zaarur plans to start installing solar panels and a small wind turbine, and he said he hopes to eventually generate the amount of renewable energy that the property consumes. In the meantime, the motel was re-opened last summer and is currently 90 percent operable.

"For years it has established a name there and it's a really nice location that people like to come and visit," he said. "People come in to get rest, to see the beauty of nature — that's why I was attracted to come over."

Someday, he hopes people will also come over to see what an example of sustainability looks like, too.

"It's a work in progress," Zaruur said.

New Marlborough resident Cameron Stanisz was working with his father at the Housatonic Curtain Co. factory when the company that owned the facility, Country Curtains, closed at the end of 2017. Both men lost their jobs.

In July 2018, Stanisz, 25, started his own car detailing business, C&D Detailing. His father, David, helps with the cars, and his mother, Shannon, acts as the company's secretary.

"It's definitely a big undertaking, being a young kid." Stanisz said. "I don't really have that much money to start things."

Stanisz runs a mobile service — he and his father travel to their customers — which means the business is susceptible to rainouts in warmer weather and a big slow down in wintertime.

"It was pretty good during the summer," Stanisz said. "I would like to have a garage at some point." In the meantime, he plans to buy an inflatable spray paint booth that a car can fit inside.

Even with its challenges, Stanisz said he enjoys both cars and the creative freedom he has as his own boss.

Plus, he added, "It's nice working with family."

Stockbridge resident Will Steinert, 28, compares taking down trees to solving a puzzle. This past year, he used a similar mindset as he tackled how to run his own new business, Steinert Tree Care.

Steinert started out with a truck, a chainsaw, and climbing experience as a former employee of Hyatt Tree Co. in Sheffield, plus the mindset that he applies to tree care: don't be single-minded about how the job's done.

"I know there's guys who start out with a bunch of equipment loans and get buried in debt," Steinert said. "I didn't want to do that."

It took time — and buying a trailer here, a wood chipper there — for him to get going, but Steinert said that he's growing busy now. Which means he's busy solving those tree puzzles.

"A lot of the time with pruning large branches or removal, it can't just be cut and dropped," he said. Depending on the temperature, humidity, tree species and level of decay, he added, "There are a lot of different ways to take a tree down."

Sometimes, a bucket truck may be necessary, while in other situations, Steinert might lower branches down with specially-knotted ropes. There are variables to consider, like houses or power lines, people on the ground below, and then, well, the ground, where Steinert said he's careful about not leaving divots or any sort of mess.

Sorting through all this, Steinert said, is what thrills him.

"Safely removing that and making a whole tree or specific branch disappear - that's the most exciting aspect," he said.

"I could eat noodles everyday," Ezinga, 42, said. Thanks to her business, Steam Noodle Caf in Great Barrington, Berkshire residents can also eat dishes like Khao Soi Gai (an egg noodle dish from Ezinga's home city of Chiang Mai) most days.

Ezinga said it was a dream to open her own restaurant after many years of cooking in other people's kitchens. The one-room, 10-seat space she started with is small: she buys fresh vegetables each day because she doesn't have storage space; she cooks on the other side of the counter from her customers; and she has to turn away large groups of people.

But Ezinga makes what she has work. She enjoys chatting with her customers as she serves up her recipes, which are inspired by Japanese, Chinese, Vietnamese and, of course, Thai, influences.

While she'd like to have more room some day, Ezinga's customers assure her that she's already filling a desirable niche.

"They said they've been waiting for a noodle shop for a long time to come to this town," she said.

"In the summertime there are a lot of opportunities for kids in the arts and STEM, but when it came to second language learning, there was nothing," Dupuis said. "It's not something that we as a culture have really started to buy into."

With "kind people who are patient" from the Pittsfield Small Business Fund to help her with budget and tax questions, and with a rental agreement from Ventfort Hall in Lenox, Dupuis offered two, one-week sessions for 15 youngsters last year.

Dupuis teaches during the French week and her colleague, Angela Spitia, leads the Spanish one. This summer, Dupuis has added an extra week-long session for graduates of last year's French week.

During each camp day, Dupuis teaches one language lesson in the morning before the campers practice through songs, games and general interactions.

"They're just doing whatever they're doing normally in a day - it just happens to be in another language," Dupuis said.

As to why someone might send their kid to Berkshire Lingua, Dupuis said that, "for the little people, it's opening brain pathways in big ways." She added, however, that this shouldn't be the reason people learn another language — her father, after all, did it for love.

"I think it should be about this curiosity about other people and their culture," Dupuis said.