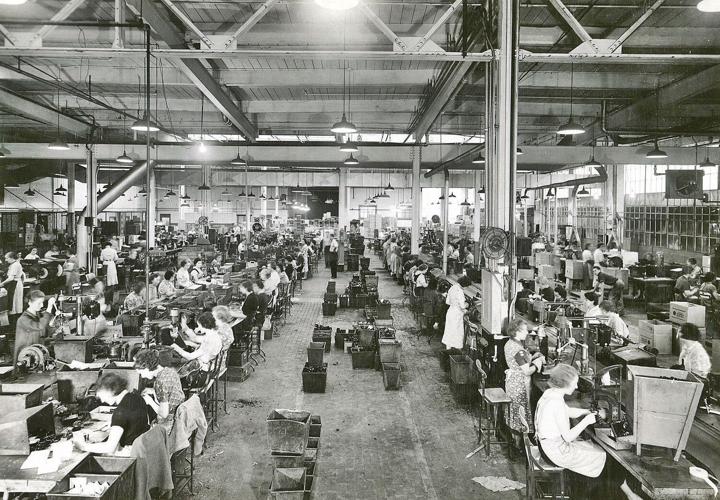 The way it used to be: Employees crowd the plastics finishing room at GE Plastics in 1938. New uses have been found for several of the Berkshire's former manufacturing facilities as the region embraces a growing service economy. 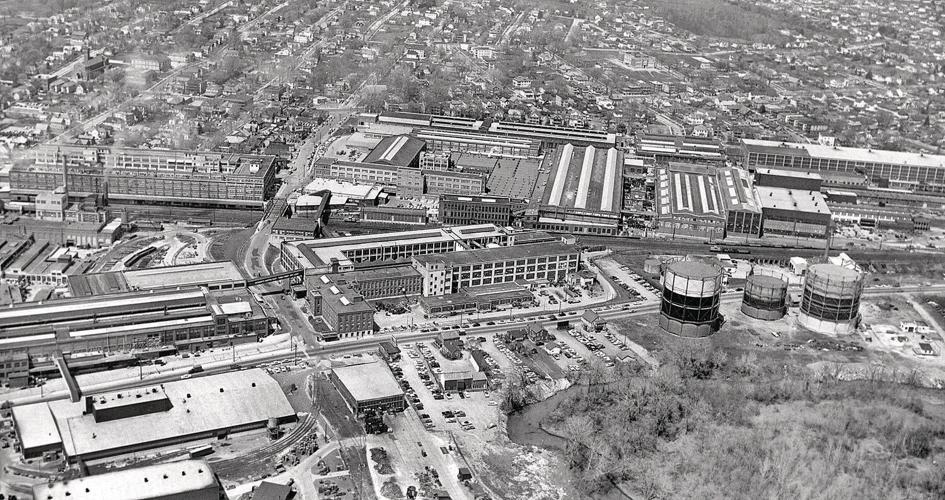 General Electric's plant in Pittsfield in May 1958. GE's presence in the Berkshires along with the size of its Pittsfield facility have shrunk over the last 60 years as the county's economy has become more service-oriented.

The way it used to be: Employees crowd the plastics finishing room at GE Plastics in 1938. New uses have been found for several of the Berkshire's former manufacturing facilities as the region embraces a growing service economy.

General Electric's plant in Pittsfield in May 1958. GE's presence in the Berkshires along with the size of its Pittsfield facility have shrunk over the last 60 years as the county's economy has become more service-oriented.

Some of those sprawling brick buildings where thousands of blue-collar Berkshire County residents once worked long hours manufacturing all sorts of items are now places where tourists can enjoy internationally renowned art exhibits, sip craft beer, and dine in high-end restaurants.

The shift in the use of these former factories mirrors the region's transition from an economy that relied mostly on manufacturing to one that is helped greatly by the service and hospitality industries.

Jobs in travel and tourism related occupations today make up 11.5 percent of the local economy, making it the county's third highest job sector behind healthcare (19 percent) and retail (14.8 percent), according to the Berkshire County Regional Employment Board.

"What's going on there is what's going on across the country," University of Massachusetts economics professor Gerald Friedman said. "Our buildings are old, multi-story and more expensive. It just makes more sense to move manufacturing somewhere else."

Given the growing global market, it was a "natural transition" for Berkshire County, which is rich in both natural beauty and cultural attractions, to rebuild itself as an international tourist destination, Friedman said..

In the first half of of the 20th century, General Electric. in Pittsfield and Sprague Specialty Products, later Sprague Electric, in North Adams were the major employers. But those plants began to downsize in the 1980s as economic conditions changed and thousands of the Berkshires' blue collar workers were left without jobs.

"In the past, 40 to 50 years, what's happened to the south and east has been almost astronomical in terms of migration growth. For us though, we were losing population," said Ricco Fruscio, program director of the North Adams Chamber of Commerce. "How do you increase population? You have to create attractions that people outside the area come to see."

Having a cultural network of theaters and museums, in conjunction with a terrain that lends itself to skiing and hiking, laid the foundation for Berkshire County to reinvent itself, Fruscio said. Developers began to see the potential for growth and began to hop on board, buying up abandoned factories and land to develop additional cultural venues and resorts.

A turning point in the county's economic fortunes occurred in the 2000s, said 1Berkshire President and CEO Jonathan Butler. It started with Great Barrington's growth as a tourist destination and the steady and ongoing revitalization of Pittsfield and North Adams. The payoff has been seen in visitor spending, which has increased almost 30 percent in the Berkshires since 2009. Over half a billion dollars are spent annually in the county, Butler said.

"It has had a pretty big ripple effect on development," said Butler. 1Berkshire capitalizes on that trend by investing about $1 million annually in marketing, he said.

Pittsfield, the county's largest municipality, continues to be the "economic hub" of the Berkshires. Downtown revitalization efforts, which began under former Mayor James M. Ruberto's administration in the early 2000s, have created an area that has a diverse selection of restaurants, many located within the vicinity of the Beacon Cinema, which was carved out of an old department store/office building nine years ago.

With the exception of the Massachusetts Museum of Contemporary Art which is located in the former Sprague complex, revitalization efforts in Northern Berkshire have taken a little longer than they have in Pittsfield. But they are beginning to catch up.

When Fruscio joined the North Adams Chamber three years ago it had only 42 members, Now the organization has over 150. Many of its members belong to arts and cultural organizations. Fruscio said he fields call from potential business owners interested in moving to North Adams almost every day.

"There is a renaissance happening up here and people are sensing it," Fruscio said. "We have a lot to offer."

Fruscio said he is excited for the future of the city, describing several ongoing projects that are expected to bring hundreds of thousands of visitors in each year.

Thomas Krens, who conceived the idea for Mass MoCA, recently issued an 11-part revitalization plan for North Adams, which includes his project for The Extreme Model Railroad and Contemporary Architecture Museum with famed architect Frank Gehry. His plan also includes the renovation of the historic Mohawk Theater and the construction of a luxury hotel on Main Street.

Williams College economics professor Stephen Sheppard, who studied the potential economic impacts of Krens' proposal, has predicted the $65 million, 83,000-square foot new museum will draw a minimum of 500,000 visitors annually and add between 1,400 and 2,000 jobs over the long term.

Another North Adams businessman, David York, is converting Crystal Hardhat Saloon on Union Street into the Museum of Dog, which he intends to open this year, according to Fruscio

While "nothing is guaranteed forever," Friedman is convinced that an economy based in tourism is sustainable.

"Tourism is one of the best things to do these days because it's what people do with their extra money as they get richer," Friedman said.

"Giving the rise of inequality, something I don't approve of by the way, you want to be serving rich people.," he said. "And where do rich people go? They go to Tanglewood and they buy second homes in the Berkshires."

A reliance on tourism doesn't do much for the blue collar workers who lost their manufacturing jobs. But there are positive signs in this area as well. Manufacturing firms, especially those involved in advanced manufacturing, still provide some of the county's highest paying jobs, according to Butler.

"Don't rule us out just yet." joked Perri Petricca, CEO and President of the Pittsfield-based Unistress Corporation, the state's only manufacturer of pre-stressed concrete, which is celebrating its 50th anniversary this year. Unistress, founded by Petricca's late father, is one of the county's five top employers, according to the Executive Office of Labor and Workforce Development.

Unistress hit its peak last year with 575 employees. Many were brought in to help Unistress make precast concrete panels for the new Tappan Zee Bridge in New York, a $70 million contract that the firm originally received in 2014. Most of the employees are Berkshire County residents, with some coming from southern Vermont, he said.

"The TZ bridge is the biggest job in the history of the company," Petricca said. "It's hard to have a second act like that."