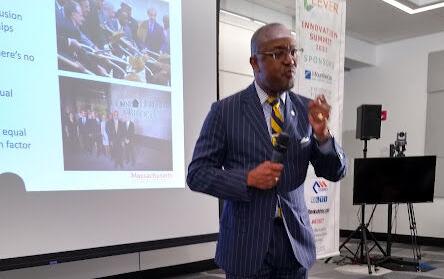 In his first appearance in the Berkshires since becoming head of the Massachusetts Life Sciences Center, Kenn Turner on Thursday discusses his plan to expand the state's biotech industry from Boston to Berkshire County. 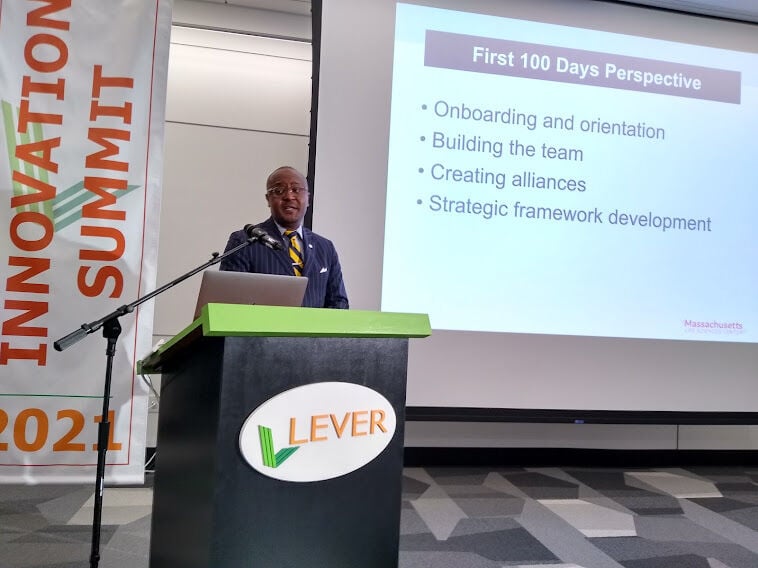 Kenn Turner, \president and CEO of the Massachusetts Life Sciences Center, uses a PowerPoint presentation Thursday to outline his plans to expand the state's biotech industry, while speaking at Lever's Innovation Summit at the Berkshire Innovation Center in Pittsfield.

In his first appearance in the Berkshires since becoming head of the Massachusetts Life Sciences Center, Kenn Turner on Thursday discusses his plan to expand the state's biotech industry from Boston to Berkshire County.

Kenn Turner, \president and CEO of the Massachusetts Life Sciences Center, uses a PowerPoint presentation Thursday to outline his plans to expand the state's biotech industry, while speaking at Lever's Innovation Summit at the Berkshire Innovation Center in Pittsfield.

PITTSFIELD — After nine months in the position, the new head of the Massachusetts Life Sciences Center has developed a framework that he says will help spread the state’s growing biotech industry across Massachusetts to the Berkshires and make its workforce more diverse and inclusive.

Kenn Turner discussed his objectives Thursday during a keynote speech at small business accelerator Lever’s second Innovation Summit at the Berkshire Innovation Center, where a new local platform for connecting minority-owned businesses in the Berkshires was also discussed. Lever’s two-day event at the BIC concluded Friday with a forum and panel discussion that featured local business leaders.

The local program presented Thursday, Blackshires, was unveiled publicly for the first time by one of its creators, John Lewis, the CEO of R3Set Enterprises in Pittsfield. A year in the making, Blackshires is a community-owned platform of media, education, and events for the Berkshire BIPOC (Black, Indiginous and People of Color) community. It intends to highlight the people, organizations and products who inspire and serve that community.

In brief remarks, Lewis spoke about the struggles that Black-owned businesses had connecting with each other during the COVID-19 pandemic.

“I don’t know how many email chains we went through, but it was probably the most inefficient way to actually try to communicate with our available resources,” Lewis said.

He described Blackshires as the first phase of an interactive. media and community development network that will highlight Black culture, organizations, businesses, people and resources in Berkshire County.

Turner, making his first appearance in Berkshire County since becoming the MLSC’s president and CEO last December, said he wants the agency to spread the lucrative biotech sector out of its core areas of Boston and Cambridge by focusing on regionalization. Based in Waltham, the MLSC is an economic development agency charged with overseeing the state’s life sciences industry.

This regional approach will concentrate on establishing “biomanufacturing” facilities around the state instead of expanding research and development sites, Turner said. Biomanufacturing is the manufacturing component of the biotech industry, according to the National Library of Medicine. It utilizes biological systems, like animal and plant cells, to produce commercially important biomolecules for use in the agricultural, food, material, energy and pharmaceutical industries.

“We’re going to take a step back and look at biomanufacturing particularly,” Turner said. “That’s where I want to begin. I think that’s where communities like this community (the Berkshires) can compete. The R&D is embedded where it is in Boston and Cambridge.”

The opening of the Berkshire Innovation Center in Pittsfield last year has placed a renewed focus on innovation in the Berkshires, but the county currently has only a handful of companies that operate in the biotech space. The county, does, however, have a long history of manufacturing, and currently has several firms that make high tech products for a variety of different industries, including extremely sophisticated medical devices.

Those type of high tech companies are the firms that the MLSC is hoping to target, Turner said.

“So we’ve got to convince our partners in industry to think like that,” Turner said. “I admit that’s that’s not going to be an easy lift. But I’m convinced that we can, and that’s what we’re going to be working on.”

Turner spent seven years as the director of diversity and inclusion/compliance at the Massachusetts Port Authority before joining the MLSC, and said he plans to use what worked there to diversity the workforce in the life sciences sector and make it more inclusive “with a slightly different twist.” He wants to bring workforce diversity initiatives outside of Boston, to Gateway Cities, like Pittsfield, or to Lee, where Berkshire Sterile Manufacturing is currently undergoing a $20 million expansion of its 116,000 square foot headquarters, which is expected to create 75 new jobs. BSM recently received $185,000 from the MLSC to create 35 new jobs in connection with that project.

“But I need your help,” he said. “This is your community not mine. You know it better than I do. I have to partner with you....My commitment to you is simple. You’ll find no better partner on the planet....If you’re as committed and passionate as I am about this, I’m in it with you 150 percent.”

Turner said he plans to visit the Berkshires more often in the future and visit Berkshire Sterile Manufacturing on Friday before heading back to Boston.

“This is my first time out here, but I want you to understand that this most certainly will not be my last,” he said. “There’s nothing more important to me than sustaining the ecosystem throughout the commonwealth. I think a big part of it is regionalization, how do we take something doing so well in the Boston-Cambridge area, super-charge it, and spread it across the state.

“We can’t do that sitting in an office in Waltham or Beacon Hill.”