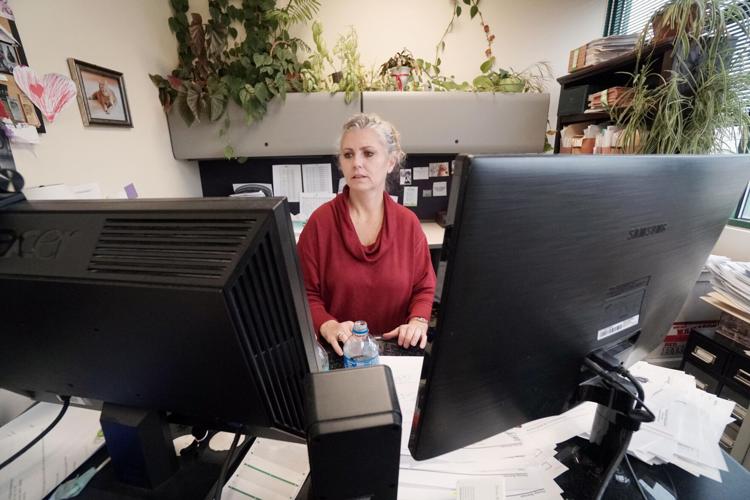 Chrissy Sherman works as a paralegal at Martin & Oliveira in Pittsfield. The law firm is currently looking for three paralegals, positions that have been open for a year. 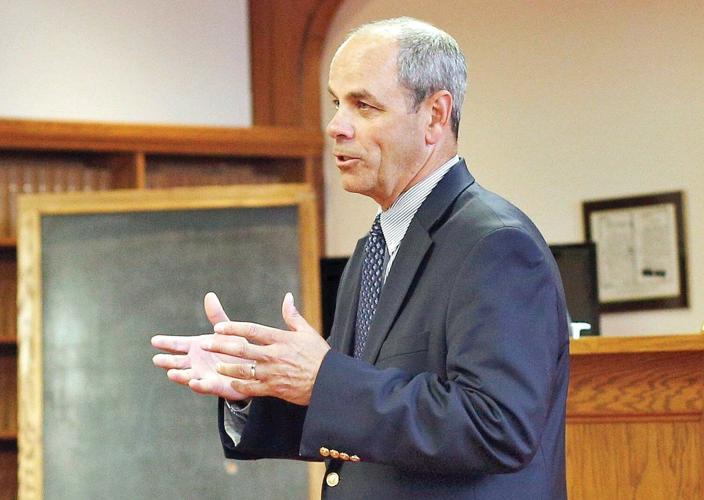 Since February, Francis B. Marinaro, the former Berkshire County register of probate, has worked as firm administrator for Martin & Oliveira, a Pittsfield law firm. Marinaro says that, as register for 24 years, tons of people would apply for state jobs with the court system. Today, he struggles to fill well-paying paralegal jobs with his firm.

PITTSFIELD — Was he kidding?

The other day, a partner at the Pittsfield law firm Martin & Oliveira got in touch to say they’ve been looking for three paralegals for a year. Though the jobs pay pretty well, here is the response: crickets.

Not one applicant in six months, John J. Martin Jr. relayed in an email. “At this point, I’ve asked my administrator to simply hire anyone who applies and we’ll see how it works out,” Martin said.

“Things are out of control and, yes, I hear the same thing from every business client I speak with, every time I speak with them,” he said.

I went up to the fifth floor in the Clock Tower Business Center to see what more that administrator, Francis B. Marinaro, could tell us. We sat in his office, with big views east, to the hills south of Dalton. Since joining Martin & Oliveira last February, after declining to run for a fifth, four-year term as register of the Berkshire Probate and Family Court, Marinaro has managed the firm’s paralegal and paraprofessional staff.

Of course I had to ask: Will you really hire anyone and train them to work as a paralegal?

He smiles. His colleague, John Martin, was being facetious. Kind of. But, not really.

And he means now.

“Could we hire a couple of people right off the bat? Yes,” he said.

So, that’s the labor shortage picture inside one of the city’s busiest law firms. The firm has 14 paralegals, but needs three more, stat.

Paralegals, who make $23 to $30 an hour at the firm, play a crucial role in preparing documents and researching legal issues — the essential work of this profession. The firm’s nine attorneys guide that labor, and need the help to keep up with their own workload.

“They can be very valuable in terms of their role here,” Marinaro said of the firm’s paralegals.

So, what to do? Marinaro says he’s working to create some sort of farm team system, perhaps a pipeline from local colleges. He also is thinking about reaching out to other Berkshire law firms to see if they work together to attract and mentor talent.

“They’re all in a similar situation,” he said.

Project Paycheck: Roberta Dus and Rick Callahan got their restaurant, Paddy’s Pub, through the worst of the pandemic. Then came the labor shortage — and a wholesale flight from the kitchen.

Back when he was the register, openings for state jobs with the trial court would bring a flood of applications, often 50 or more.

The candidate gap today has Marinaro thinking about how important it is to keep good people already working for Martin & Oliveira. “You have to make sure that you sustain the people you have. The good people who have gotten you where you are.”

Open notebook: Why won’t they call candidates back?

Part of our Project Paycheck game plan is to share information as it comes in from readers interested in work life issues.

To that end, we have a quick survey posted. Please consider adding your thoughts.

A lot of the time, reporters go first to experts. (Guilty! I did that in our first dispatch.) If they’re good, these people can give a rough sense of what’s going on.

In my years of reporting, though, I’ve found that nothing opens my eyes as much as people talking about their “lived experience.”

I’m finding a lot of that testimony emerging through posts to The Eagle’s Facebook page, in response to Project Paycheck installments.

One takeaway I’ll share here, with more later: People think it’s wrong for employers not to acknowledge that they’ve come knocking. Mind you, these are folks who want to work. Here is a bit of what we’re hearing:

From Karylee Doubiago: “Employers need to get back to applicants. I applied to nearly 30 positions over the summer … only 3 got back to me, of that (I had) 2 interviews and I was lucky to get a great job that I have now. Over the summer, my daughter heard back from 0 of her applications filed. If employers are so desperate, they need to start being respectful, and respond to applicants.”

“My daughter has applied for over 30 jobs over the past 3 weeks and only heard back from one … that she didn’t get. If they are so desperate, why aren’t they hiring or even replying back?”

From Kurtis Emery: “I applied to numerous jobs in the summer, about 3 out of 20 got back to me. I was an auto tech for 17 years of my life at a couple local dealers. I decided to switch careers because it takes a toll on your body. I tried for ‘different’ jobs, shot for the sky. I’m now working a seasonal job delivering oil. I’m glad to be working and want to work. I will say, though, if you want an in for a good-paying company with good benefits, you need to know someone.”

My trip into the lobby, and beyond, of an online Berkshire job fair

Those experiences had Meghan Licata, who lives in Sheffield, nodding.

“All of what is said above is true,” she posted to The Eagle’s Facebook page. “I also applied to many, many jobs that I was absolutely qualified for and they won’t even get back to me ... not any type of answer.”

And then there is this. Maybe some places aren’t responding for a reason. That’s the theory in this post that came in: “They say they are hiring but actually aren’t. I know a few people that have put resumes in here and there and no call back. The ones that applied followed up only to find out they aren’t hiring, but were told to put the signs up that they were.”

PROJECT PAYCHECK: Staffing agencies sit, as brokers, between the region’s many current job openings and today’s shallow pool of candidates. This is what they're seeing.

PROJECT PAYCHECK: Child care centers in the Berkshires are fighting to hold it together, one positive COVID-19 test and one teacher resignation after another. By all accounts, the pandemic has steamrolled a stressed early-education system in Massachusetts. “It’s been difficult not being able to work because I can’t find child care for my daughter," said one Berkshire County mother. She's not alone.

As the pandemic recession eases, a mystery remains. Where are the Berkshires’ missing 2,000 workers?

Q&A: 11 questions for Heather Boulger, a workforce expert, on why the jobs recovery has stalled.