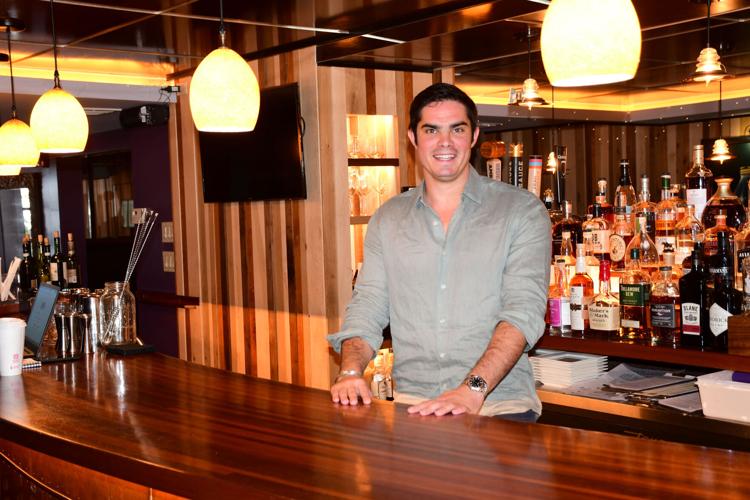 Salame has invested about $5 million into the downtown restaurant scene in Lenox, and now owns close to half the commercial district’s full-service dining establishments. 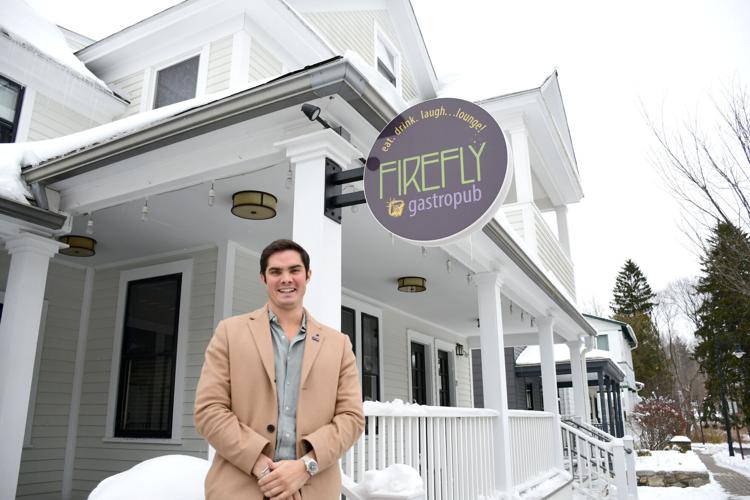 Ryan Salame is shown outside Firefly Gastropub, one of the restaurants he has purchased in Lenox. Salame also owns the Old Heritage Tavern, The Scoop, the former Cafe Lucia, and plans to start a new operation, Lenox Catering Co.

UPDATE: Who is cryptocurrency exec Ryan Salame? In his hometown of Sandisfield, some have no idea. But those who knew him defend his character

LENOX — It started when he was 14 — a first job as dishwasher at the former Martin’s Restaurant in Great Barrington.

Sandisfield native Ryan Salame was a student at Monument Mountain Regional High School then, and he kept working at Martin’s off and on for seven years, doing “a bit of everything, including waitstaff and management assistance,” he recalled fondly.

“I loved being in the restaurant industry; it’s hard work, chaos, everyone’s yelling,” he told The Eagle during a sit-down interview at his Firefly Gastropub on Church Street. “The relationship with all the staff at Martin’s was great.”

Fast-forward: Salame graduated from the University of Massachusetts-Amherst’s Isenberg School of Management with a business degree in accounting, then earned a master’s in finance from Georgetown University in 2019. Since then, he has been a rapidly rising Bitcoin tycoon as newly minted CEO of FTX Digital Markets in the Bahamas, a subsidiary of the global cryptocurrency exchange FTX.com.

But, in downtown Lenox, Salame (pronounced Salem), now 28, is best known as the owner of a half-dozen commercial restaurant properties under the new marketing banner of Lenox Eats.

In July 2020, he acquired Firefly Gastropub, thanks to a long friendship with former longtime owner Laura Shack. In March, he purchased the Olde Heritage Tavern from proprietor John McNinch in a $1.5 million transaction for the building on Housatonic Street, plus an additional amount for the business.

Since then, Salame has added Cafe Lucia; The Scoop; a vacant property on Franklin Street soon to be a restaurant, and a commercially zoned house behind Lucia slated as the site of Salame’s new Lenox Catering Co., to be operated by Donna Navarino, with high-end catering experience for more than 20 years, and as an auxiliary facility for Lucia’s reincarnation, with details on that venture to be announced.

The Scoop, an ice cream and candy shop in Lenox, will expand under new ownership

The bottom line: Salame, whose parents still live in Sandisfield, has invested about $5 million into the town’s downtown restaurant scene, and he now owns close to half the commercial district’s full-service dining establishments.

“I had never really planned to own a restaurant,” he acknowledged, but when Shack called to offer her business as restaurateurs struggled to meet the challenges of COVID, he jumped at the chance. “It came at a good time for me and made sense,” he said.

Salame, with so much on his plate, considers Lenox “the uniquely perfect town for everything I’m doing; it’s the right size,” he said. “A lot of things are turning over, a lot of investment is coming in,” primarily in the hospitality field.

Some longtime restaurant owners have retired, passed away or are worn down by the coronavirus pandemic, he pointed out.

Leasing Firefly, his favorite hangout during his college years, served as a learning experience for Salame, since there was a team in place under Jane Blanchard, who continues to be in charge day to day while also managing the Lenox Eats group. Other than cosmetic changes, Firefly remains much the same.

Also largely unaltered is the Olde Heritage, which McNinch and his family had owned for 20 years before he and his son, Tucker, opened 101 Restaurant & Bar last summer, a restaurant with a Southern-influenced menu in the Holiday Inn and Suites on West Street in Pittsfield.

“The Heritage was another long-standing place that I liked,” Salame said. Becky Piccolo, “the heart and soul of it” during McNinch’s ownership, now is the official manager, he added.

“With multiple establishments, we can save a lot of expenses on the back end,” he emphasized, with food costs rising and salaries increasing as restaurants have to impose rising menu prices (“Your burger goes up a dollar and everyone sort of wants to end your life,” he quipped.) amid other increased costs of doing business.

As for widely publicized staffing shortages, “What helps here is that we’re building a grander vision so there’s more upside working in one of these restaurants,” said Salame, citing beneficial efficiency.

“There are managerial roles popping up, creating opportunities and excitement. It feels like a team of people, making it easier.” Current staffing for the Lenox Eats group is about 25, but that total will increase dramatically for the summer.

His overall vision is to make Lenox the dining hub of the Berkshires for locals and visitors, he said. “I want Lenox to be the first place you think of, which will benefit all the other restaurants as well. I’ll add where I can, and try to complement where I can.”

Other acquisitions quickly followed the Firefly and Heritage purchases:

• After meeting co-owner Nadine Atalla as the health of her husband, Jim Lucie, declined before his death June 13, Salame expressed interest and followed through with the recent purchase of Cafe Lucia.

“There’s a lot of potential there,” he said. “We haven’t nailed down exactly what will happen with it.”

An adjacent vacant house on Tucker Street, zoned commercial, also acquired by Salame, will enable him to combine the footprint, subject to town approval, for additional outdoor dining and to house his new catering venture.

“I think we won’t keep it as Cafe Lucia; it was really Jim and Nadine’s vision, and it would be hard for me to push that forward,” Salame said. After renovations, he aims to reopen the establishment next March as a year-round eatery, but not as an Italian restaurant.

• In October, Salame acquired The Scoop, a popular ice cream parlor and sweets shop owned by Jennifer Nacht for 13 years. New manager Cheryl Murray, “an incredible baker,” he said, will expand it into a small cafe with quiches and coffee, renaming it Sweet Dreams, combined with an adjacent storefront on Church Street, formerly Twigs, that will house the candy emporium.

• Last month, Salame bought the long-vacant restaurant property at 7-9 Franklin St. — it once housed Lenox Pizza — for $625,000. It will reopen as a restaurant, with the concept to be decided.

“We have a lot to focus on right now,” Salame said, “so, unless something pops up that is an opportunity that won’t always be there, probably not.”

Since Salame is based in the Bahamas most of the time for his cryptocurrency work, he points out that “the team runs 98 percent” of his Lenox investments.

“It’s almost entirely delegated, and then I jump in for 2 percent of it,” he said. “I love being here; I prefer being in the Berkshires with my family above all else, but it’s been pretty busy for me in the Bahamas recently, a bit more than I anticipated. In an optimal world, I’d spend half my time here, and half down there.”

Based in downtown Lenox but aiming to roam the Berkshires, Brian Drumm's new food truck caters to “the working person’s style of food — quick, easy, simple with ample portions.”

By one tally, Ryan Salame’s giving in the 2022 mid-term elections ranked him 11th in the country among donors to one of the two major parties.

The name of a Berkshires native surfaced Thursday in one of the early bankruptcy documents in the epic collapse of the FTX Group, the global cryptocurrency firm. That name, Ryan Salame, is just a footnote in an affidavit provided by the man tapped to unravel the company’s financial mess. But a footnote with a big dollar amount attached.