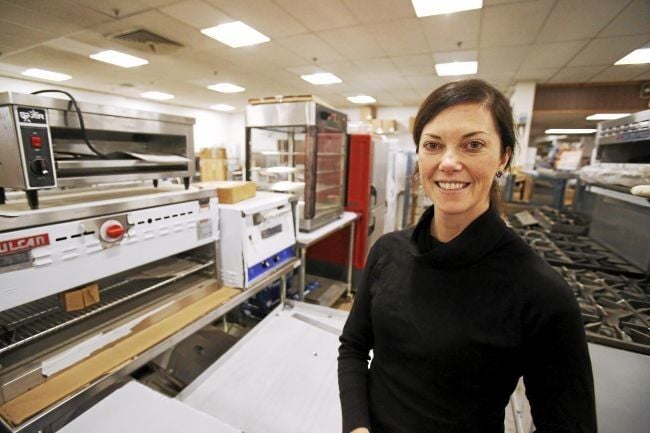 Tricia Drambrauskus, right, who runs B&G Restaurant Supply of Pittsfield with her brother Bob, has honored her late mother Gloria Powers for founding the business. 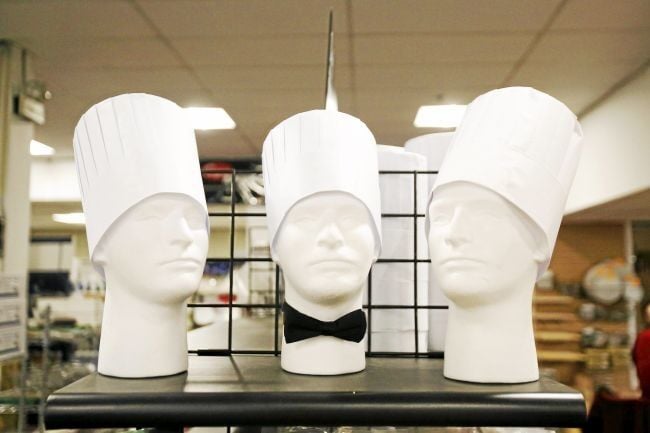 Chef's hats are some of the offerings that are available at B&G Restaurant Supply.

Tricia Drambrauskus, right, who runs B&G Restaurant Supply of Pittsfield with her brother Bob, has honored her late mother Gloria Powers for founding the business.

Chef's hats are some of the offerings that are available at B&G Restaurant Supply.

PITTSFIELD >> Gloria Powers started her own business at a time when it was unusual for a woman to do so.

The year was 1985, and Powers had recently lost the job that she had held for 22 years. Her then employer, S.S. Pierce, which sold tableware, paper supplies and other equipment, closed its Pittsfield office.

Shortly after that, National Supply closed its building on Wahconah Street leaving Berkshire County without a showroom for firms seeking restaurant supplies.

Already familiar with the food service business through her previous job, Powers decided to start her own restaurant supply company to help people in the Berkshires. The business began in a garage located across the street from an eatery on West Housatonic Street.

That business became B&G Restaurant Supply, and the Pittsfield firm was honored recently by being named to the Commonwealth Institute's 2014 list of the state's top 100 women-owned businesses. The list was published in the Boston Globe's Sunday Magazine on Oct. 26.

Ranked 72nd, B&G is one of only two Berkshire business on this year's list-Onyx Speciality Papers in Lee is 90th (Onyx also made the list last year). But one thing sets B&G apart from the other 99 selections. It is the only business whose owner is listed posthumously.

Gloria Powers died at the end of 2013, and her daughter, Tricia Powers Drambrauskas, who now runs B&G with her brother, Bob Powers, nominated B&G for placement in honor of her mother's memory.

"She was just an incredible person," Drambrauskus said, speaking through tears.

The Commonwealth Institute — a nonprofit that supports female business leaders — compiles its ranking by evaluating each firm's revenue or operating budget, the number of employees it has in Massachusetts, its workplace and management diversity, and any innovative projects it has undertaken. But companies have to apply for consideration. This is the 13th year the list has been released, but the first time B&G had ever applied.

"We wanted to honor our mom," Drambrauskas said. "She would never take the credit when she was here."

Gloria Powers was a big influence on her daughter's life. Drambrauskas still sits at her mother's old desk, which is in the middle of the showroom floor surrounded by those of other company employees. A photo of her parents is prominent. Bernard Powers, Gloria's husband, who also helped run B&G, died in 2011.

"I try to be just like her," Drambrauskas said. "She was so incredible and loving. It's hard to find those qualities in a business person.

"I sat one desk over and tried to pull out as much knowledge from her as I could,"

Drambrauskas was only seven when her mother started B&G 29 years ago.

"There weren't any women in business at all," she said. "So my mom took a lot of flack because she wasn't a stay-at-home mom."

Even though she had been a buyer for S.S. Pierce, and had managed the business side of the company's Pittsfield operations, Drambrauskas said some early B&G customers didn't take her seriously.

So Gloria Powers used subterfuge to her advantage.

"She would always pretend to be the secretary, that's what she knew," Drambrauskas said. "She would gather the information, and when needed she would pull in my dad."

Bernard Powers, who encouraged his wife to start her own business, kept his full-time job at General Electric after B&G started, but left to help his wife when the company began to grow. B&G, the initials stand for Bernard and Gloria, had $250,000 in sales its first year, but by the third year sales had jumped substantially to $1.2 million. B&G currently has 35 employees, 25 in Pittsfield, and 10 in an office in Albany, N.Y. that the company opened in 2004.

To keep up with the demand, B&G moved to a location on Bradford Street in 1989, and to its current home on Eagle Street in the early 1990s. Through all the moves, Gloria continued to be unassuming. Her desk always stayed in the showroom.

"She would never move into an office," Drambrauskas said. "She liked the fact that people would come in and not know who she was. She could tell a lot, gauge a lot about a person, by how they treated other people."

Dave Renner, who owns The Marketplace Kitchen, which has eateries in Sheffield and Pittsfield, has been a customer of B&G's since 1988. He said Gloria Powers was extremely knowledgable about the restaurant business.

"You could call her up for specialty items all the time, and she'd know what you were talking about," Renner said. "She was incredibly supportive to restaurant people."