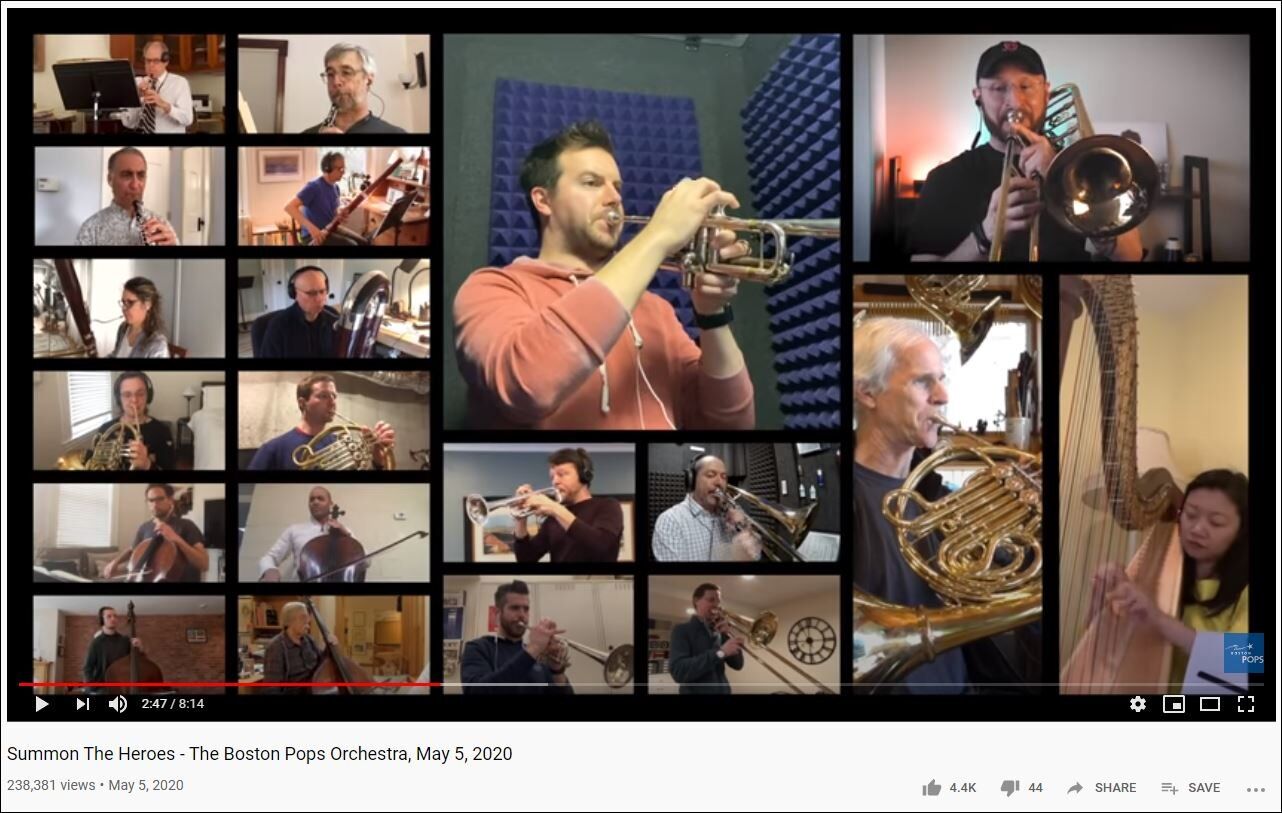 The Boston Pops, seen in this frame from the YouTube video, assembled its orchestra virtually to record “Summon the Heroes,” a salute to front-line health care workers. 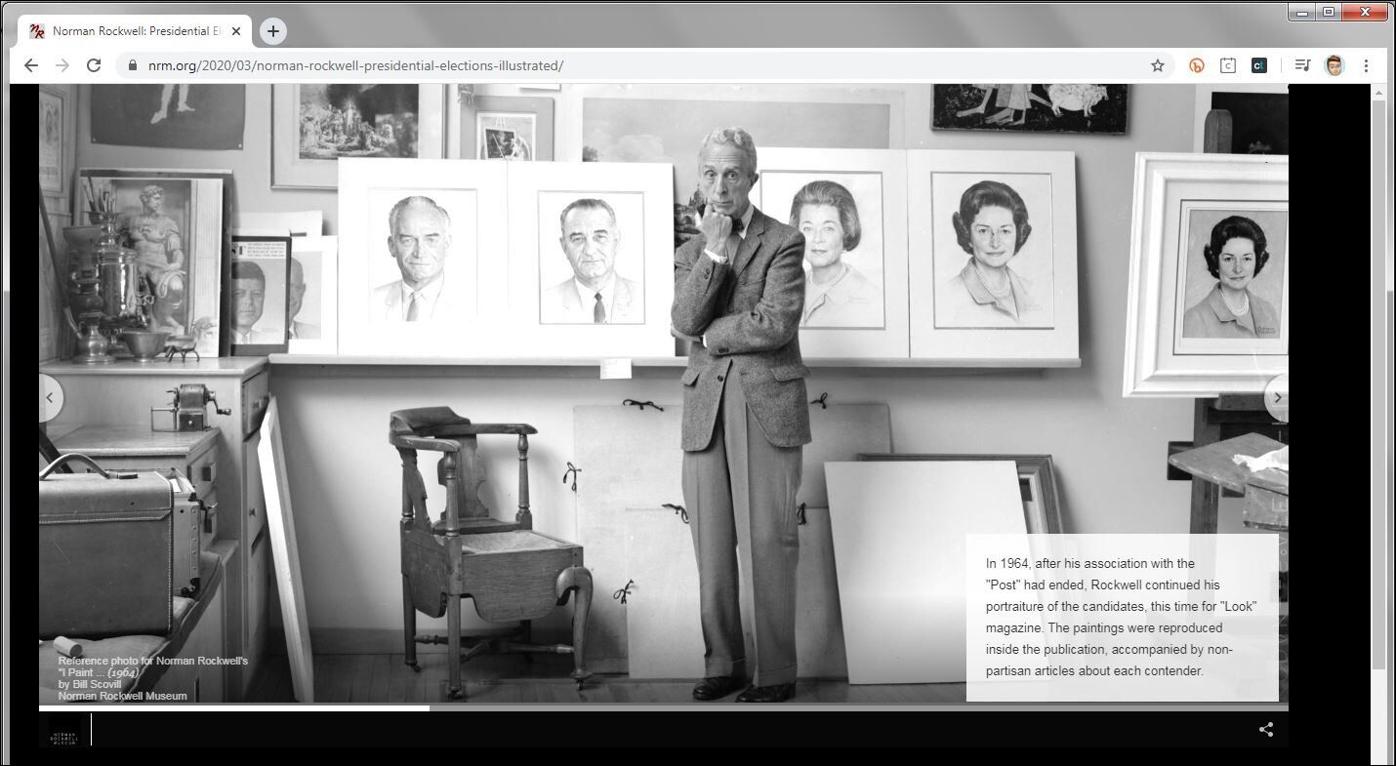 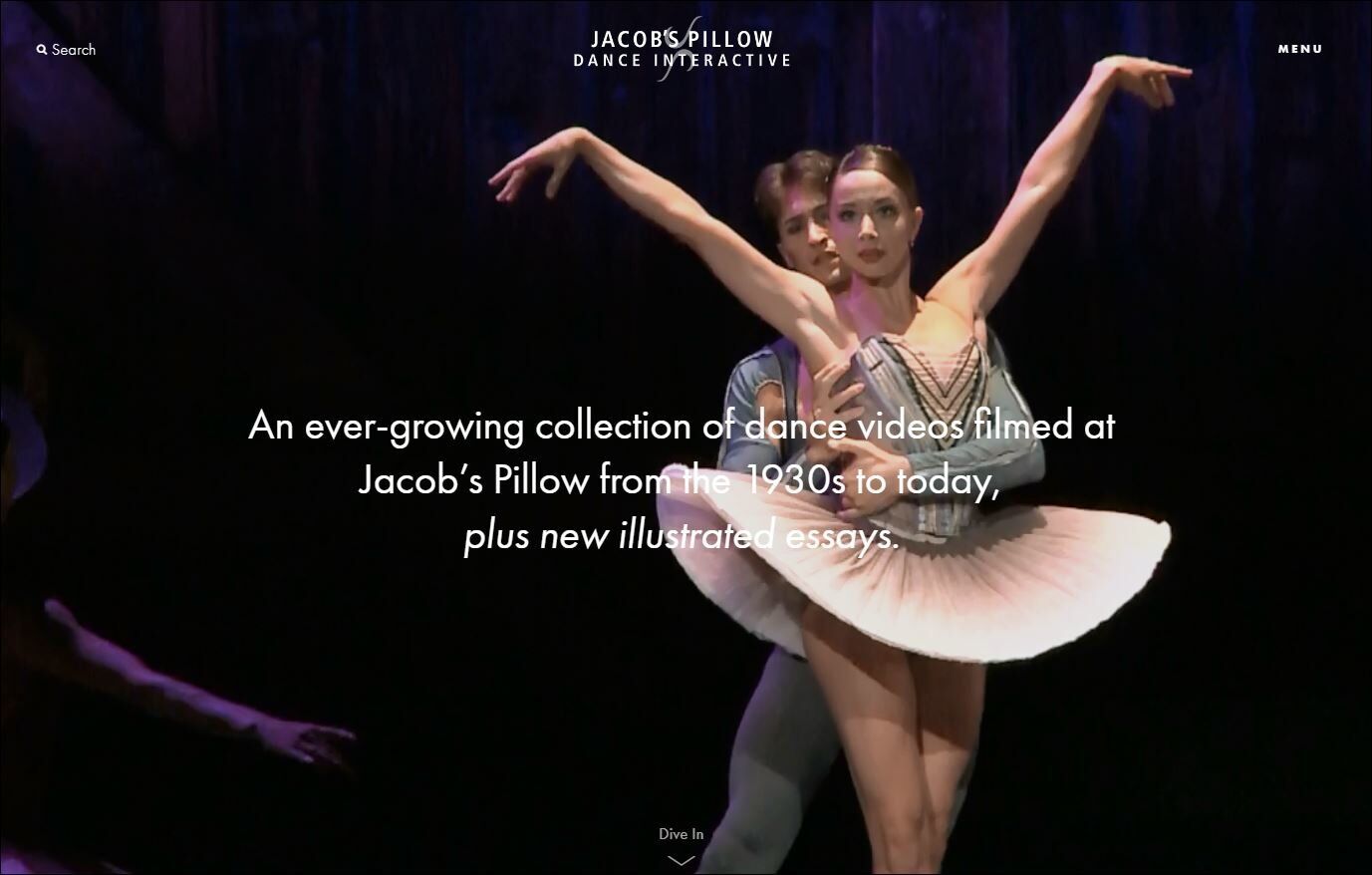 Jacob’s Pillow offers a vast collection of streamed dance performances with noted artists on its website. 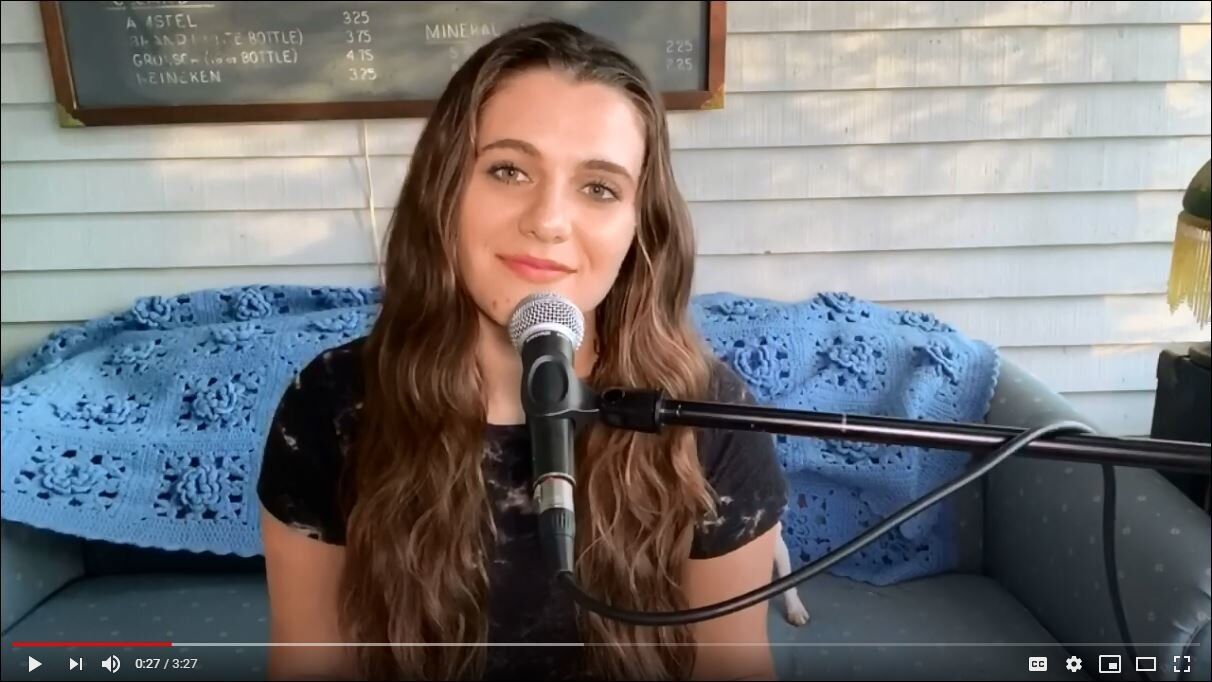 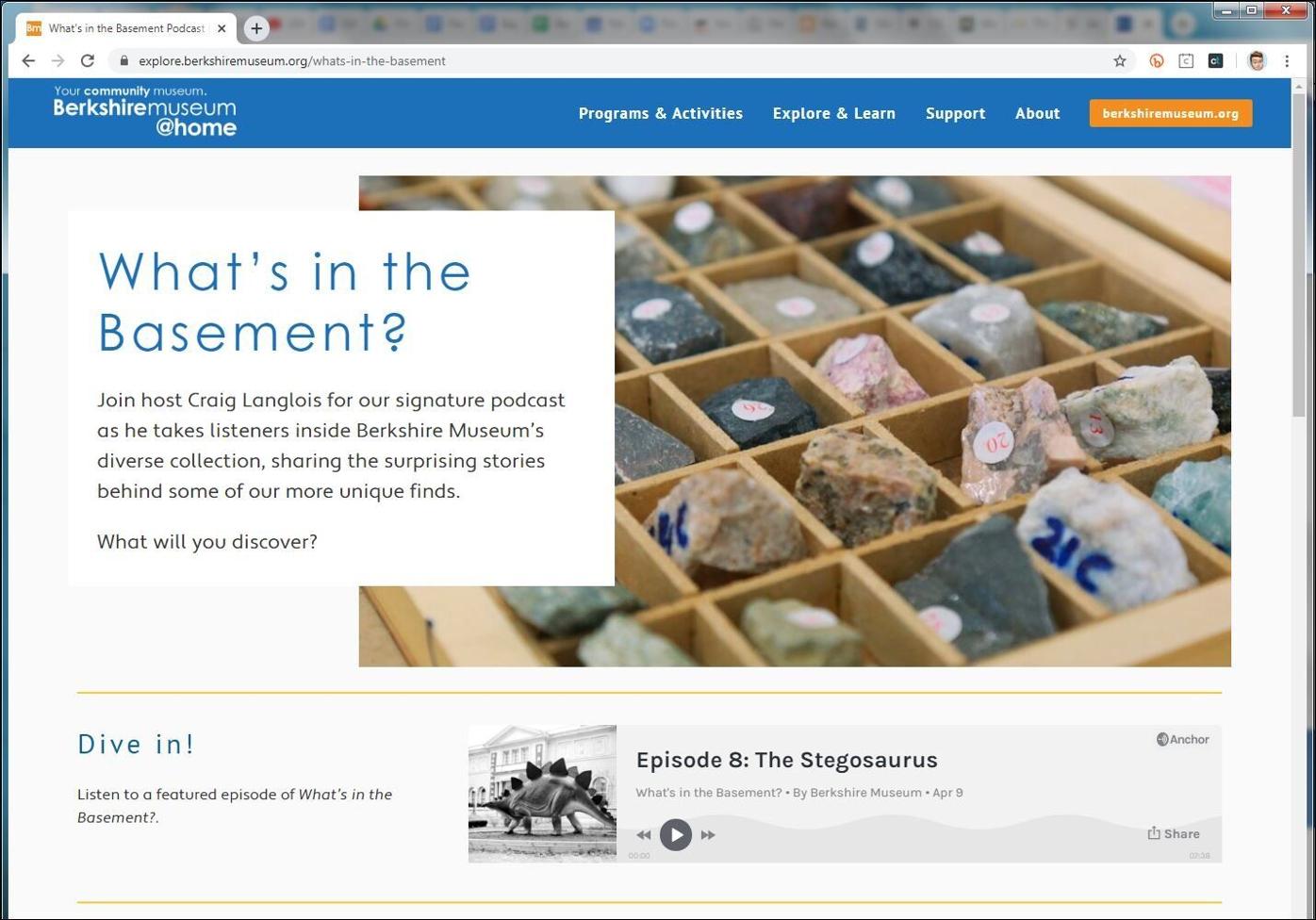 The Berkshire Museum has an online exploration section of its collection, including a weekly podcast called "What's in the Basement?"

The Boston Pops, seen in this frame from the YouTube video, assembled its orchestra virtually to record “Summon the Heroes,” a salute to front-line health care workers.

Jacob’s Pillow offers a vast collection of streamed dance performances with noted artists on its website.

The Berkshire Museum has an online exploration section of its collection, including a weekly podcast called "What's in the Basement?"

WILLIAMSTOWN — Since the pandemic shut down life as we knew it in March, museums, theater companies and orchestras are churning out podcasts, webinars, streaming videos and other online initiatives in unprecedented numbers.

Cultural institutions may be locked, but online their doors have been flung wide open to signal a public presence, offer alternatives to despairing health and political news, and allow actors, musicians and artists a chance to do what they love to do — creative work.

Streaming videos and social media accounts may have been peripheral newcomers to the marketing toolkits of Berkshire visual and performing arts organizations. But in this moment of darkened stages, empty galleries and silent concert halls, online digital marketing is indispensable.

Advantageously, they cost little if anything to distribute, and organizations that ignore it will vanish, experts predict.

Confined at home and hungry for distraction, entertainment and human contact, audiences are responding, according to cultural officials from around the Berkshires.

Richard Bradway, director of digital learning and engagement at the Norman Rockwell Museum, said public interactions with his institution’s digital programming grew 12 percent between the start of the shutdown March 13 and the end of May. Viewings of its virtual exhibitions grew 316 percent over the same period last year, while time spent looking jumped 3,380 percent.

To meet demand, cultural organizations are plunging into archives for reruns of performances or artworks to talk about. They are conducting educational workshops on everything from making art to rehearsing plays to thinking out loud. And they are chatting with furloughed actors, musicians and artists stuck at home.

It’s a given among nonprofit business models that production costs will outrun ticket income with private and corporate philanthropy bridging the gap. To that end, some organizations are courting members and donors with customized digital content unavailable to the general public.

The GhostLit Repertory Theatre, a University of Mississippi student-run theater company, chose to raise funds for front-line charities through its Zoom theater productions. How these strategies will play out through the economic reopening and beyond remains to be seen.

Bradway, who came to the Rockwell five years ago after serving as associate director of new media with the Boston Symphony Orchestra, sees untapped potential.

“With the intense competition for people’s eyeballs from subscription services like Netflix and Disney,” he said, “cultural institutions need to start thinking like media companies, producing content to support their mission and reaching people where they are.”

For example, tracking online visits to improve programming and fundraising could be streamlined, he said, by using Google Analytics — a free user-measurement service — in concert with systems like Fare Harbor for online ticketing and Abila for fundraising. It’s already being explored as a customer-management strategy with the introduction of online ticketing in anticipation of reopening, he said.

Illustrator-led, online drawing classes at his institution have attracted up to 60 registrants, far more than could squeeze into a physical gallery space. Using Vimeo Premium, a competitor to YouTube, Bradway said a paywall could be established for potential income.

“For a museum of our size, we sustain a high level of online activity,” he said. “What we do that pushes us ahead is push the envelope more.”

A major goal is to capitalize digitally on the global reach of the Norman Rockwell name when there’s scant chance the billions who already know of him will ever visit Stockbridge.

Globalism is a guiding force for other Berkshire organizations as well.

The Clark Art Institute, with a diverse following ranging from the Asian and African scholars enrolled in its renown Research and Academic Program (RAP) to the children of its Williamstown neighbors, offers a spectrum of presentations by former RAP fellows, curator talks on collections, and crafts projects for kids and adults over its Research and Academic Program link.

The Williamstown Theater Festival, which canceled its entire summer season because of the coronavirus shutdown, made a pioneering move in forging an agreement with the audiobook platform Audible, owned by Amazon, to record the planned productions live.

“We’re excited by the possibility of becoming a global brand through this gesture,” said Artistic Director Mandy Greenfield. “We’re making work that lives on a global platform without taking anything away from WTF in Williamstown. It’s an amplification of what we’re doing.”

Among other Berkshire digital marketing achievements on display:

— The Rockwell’s “Virtual Museum” is a standout for its thoughtful, polished and engaging treatment of hot-button current issues like racism, immigration, the Four Freedoms and the meaning of home.

— The Boston Pops’ “Summon the Heroes” Zoom-style fanfare for front-line health care workers, based on a composition for the 1996 Summer Olympics, is a standing-ovation performance by Pops musicians working from home. It gleaned 232,000 views by May 5.

— Berkshire Theatre Group is running multiple episodes of classes and crafts on its Facebook page along with weekly “Couch Concerts” by BTG staff.

— Barrington Stage Company, which is going ahead with live performances later this summer under social-distancing guidelines, posted its season brochure in digital rather than print form this year, an innovation in flexibility that artistic director Juliane Boyd says was long overdue.

— The Berkshire Museum is highlighting its science, history and art holdings with family-friendly digital fare, while the Williams College Museum of Art website points visitors to activities on its social media accounts and offers downloadable Zoom backgrounds of art, including Pannini and Lewitt.

Still in incubation are the ways digital technology may reshape artistic production.

While those surveyed insist the virtual is no substitute for the actual, the translation from one mode to the other can impose new demands on methods of production.

Greenfield, at Williamstown Theatre Festival, sees evidence in the ways visual performances will be converted into audial ones.

“These are not radio plays,” she said, referring to traditional productions with voiced stage directions and makeshift sound effects.

They are recorded live with the actors, director and technical crew assembled together in a studio — a hurdle still to be resolved with the need for social distancing.

The process will demand cutting-edge thinking on the part of playwrights, composers and sound engineers, she said, to make the experience believable through dialog.

“Audio has a synergy with theater,” she went on, adding that hearing a play stirs the imagination and makes listeners want to see it, while seeing a play is no incentive to see it again.

With stunning job losses in the creative sector, innovations such as Greenfield foresees offer small gleams of hope for new employment in digital engagement, content editing, sound engineering and even script writing.

Still, recovery will be slow, experts say, with actors and artists likely among the last to be hired.

In Massachusetts alone, 15,000 out of an estimated 75,000 creative economy jobs were lost to the pandemic with a corresponding financial toll of $250 million in real — not projected — income, according to an April survey by the Massachusetts Cultural Council.

A follow-up survey at the end of June will update those figures, said Cultural Council Executive Director Anita Walker. More important, it will examine the costs of reopening and of not reopening in the context of the broader economy.

The New York-based Wallace Foundation (established by the founders of Readers Digest) also approached Berkshire cultural organizations earlier this spring to participate in a national survey to analyze audience and community’ needs in troubled times. The aim is to develop a strategy that will guide future planning, practice, and policy. A second wave of research is expected to follow later this summer.