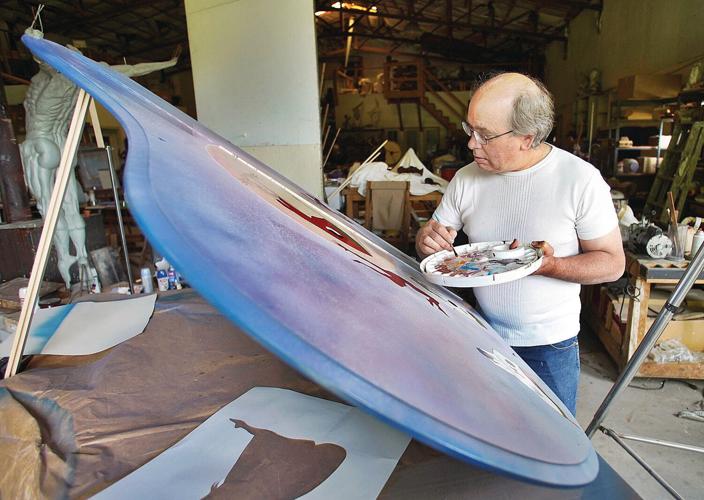 Sculptor Andrew DeVries works in his Middlefield studio painting a piano for the Berkshire Music School. 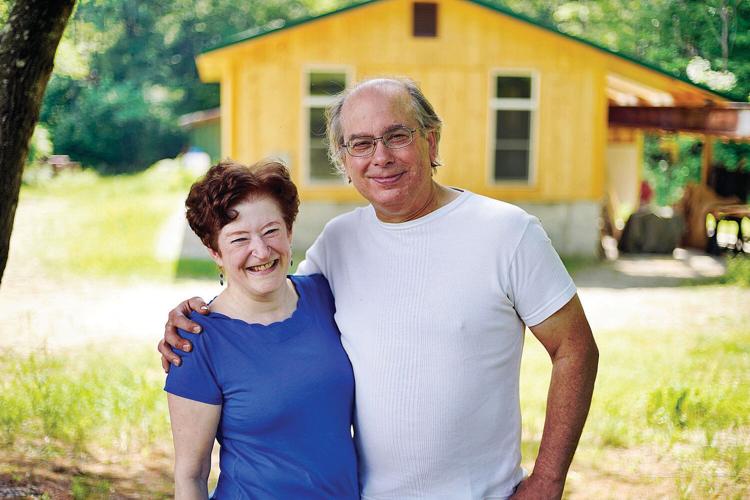 Andrew DeVries and Patricia Purdy pose stand outside the Devries' new foundry building on their property in Middlefield. Generous donations from the community helped DeVries rebuild the building which was destroyed by an explosion two years ago. 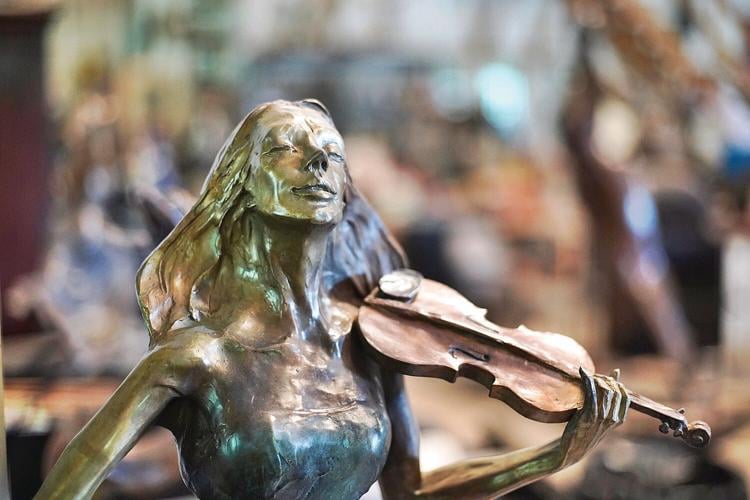 One of sculptor Andrew DeVries' works graces the yard at his property in Middlefield. DeVries' work is on display at several private and public installations, including the Library of Congress.

Sculptor Andrew DeVries works in his Middlefield studio painting a piano for the Berkshire Music School.

Andrew DeVries and Patricia Purdy pose stand outside the Devries' new foundry building on their property in Middlefield. Generous donations from the community helped DeVries rebuild the building which was destroyed by an explosion two years ago.

One of sculptor Andrew DeVries' works graces the yard at his property in Middlefield. DeVries' work is on display at several private and public installations, including the Library of Congress.

MIDDLEFIELD — The donations came from friends and family; people who are famous and those he barely knows.

They include $500 from an oil pipeline worker who had only visited his studio once, and $25 from the curator of a dance museum who just started graduate school.

When James Taylor heard of sculptor Andrew DeVries' plight, he donated two tickets from one of his Tanglewood shows to a silent auction that was held at a fundraiser held by the Lenox Chamber of Commerce.

Big, small, anonymous; all of these donations from people familiar with his work have allowed DeVries to rebuild the foundry at his River Studio complex that was destroyed by an explosion on the day before Thanksgiving in 2016. DeVries uses the foundry to pour liquid bronze, which he uses to craft his well-known sculptures.

His works are located in several private collections and public installations, including the Library of Congress in Washington D.C.

Most of the work on the new foundry, located on the same footprint as the old one, has been completed, and DeVries expects to begin pouring bronze again at the new site by next month. To mark the occasion, a ribbon-cutting ceremony is scheduled at the new site June 30, followed by a bronze pouring on July 1, which is DeVries' 61st birthday.

For the uninitiated, pouring bronze can be dangerous. An alloy that contains 95 percent copper, bronze has to be melted to be molded. The metal doesn't become liquid until it reaches 2,250 degrees in his foundry.

DeVries was in the foundry, which he built on his property with his father in 1986, on the day that the explosion occurred. He believes a recently installed propane gas line ruptured, which caused the gas to ignite on the flames that were in the foundry's furnace. DeVries managed to escape relatively unscathed — he shows a visitor the scar of a burn mark he received on his right forehead — but despite the efforts of firefighters from four towns, the wooden building was a total loss.

To make matters worse, DeVries had been unable to obtain insurance for the foundry due to its location at the back of his River Road property near Tuttle Brook. He needed $90,000 to rebuild the structure, and even more to replace the equipment — an out-of-pocket expense he would have to assume himself.

"I was determined to rebuild," DeVries said. "But I didn't know how."

He also didn't know how much his work, which has been displayed on six continents, has touched others. The first donation, from a friend who owns a business in Lenox, arrived a few days after the explosion occurred.

"The first night Andrew opened the check, he said, 'I can't accept this; it's too much,' " said DeVries' wife, Patricia Purdy. "I said, 'Andrew, the community wants to give back to you the love that you've given them.' And that's basically what the check showed us."

According to Jamie Trie, the marketing coordinator for the Lenox Chamber of Commerce, DeVries was reluctant to accept the money from Taylor's ticket auction donation because he had never met the singer/songwriter.

But now, DeVries refers to all the community support, which also includes funding from a grant and donations sent to a GoFundMe page that was set up Purdy, as "very inspirational."

"Not that I don't love having a brand new insulated building, but it really makes you feel that what you've been doing on earth was worthwhile," he said.

Eighty to 85 percent of the $90,000 that DeVries needed the rebuild the foundry has come from donations. That includes between $20,000 and $35,000 that was raised by a fundraiser sponsored by the Lenox Chamber of Commerce at last year at Ventfort Hall, which also happens to be the venue where DeVries and Purdy were married. DeVries has a gallery in Lenox.

When the original foundry was built 32 years ago, many of the modern methods that are used to plan structures, like the internet, didn't exist. So the applications process initially proved to be difficult.

"I had to apply for a building permit online, but I couldn't figure out how to do it," DeVries said

The new building is slightly less than 2,000 square feet, the same size as the old one. But its set up different than the original structure.

"I knew it wasn't going to be an exact replica," DeVries said,. "It couldn't be, and shouldn't because the needs have changed. The casting studio (in the original foundry) was a little higher than the molding studio so the roof line wasn't one. Now it's just one continuous roof line, which is why people think it's bigger."

DeVries was allowed to rebuild his foundry in the original footprint because state law allows buildings destroyed by fires started by natural causes to be rebuilt this way, said Middlefield Building Inspector Bill Girard. "Even if it's close to the lot line," Girard said.

But wouldn't an explosion have given the town second thoughts regarding its approval?

"You know what they say, things happen," Girard said. "What can you do? His old place was, you know, old. And well used. Compared to his old place this new place is a lot safer. Everything will be inspected a couple of times. You always want to help the little guy."

The new structure does have one subtle difference — the propane tank is no longer attached to the outside wall.

"I'll never do that again," DeVries said, with a cackling laugh that fills the room. "Not recommended."