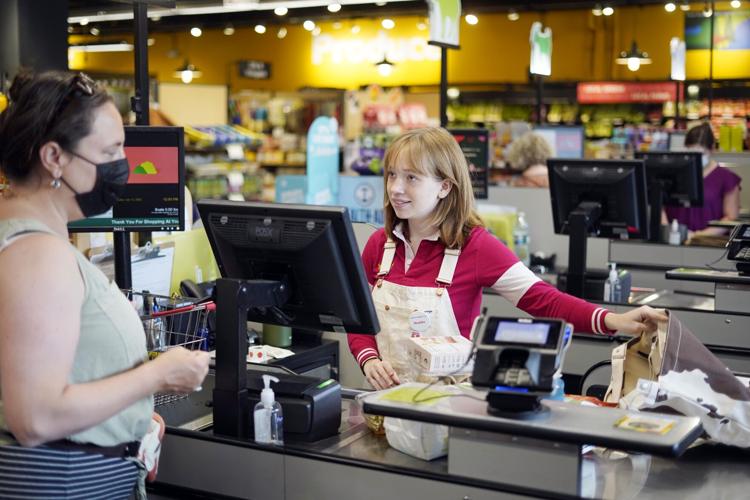 Maddie Alsdorf rings out a customer at the Berkshire Food Co-Op in Great Barrington. The market was one of the first businesses to use the new digital BerkShares. 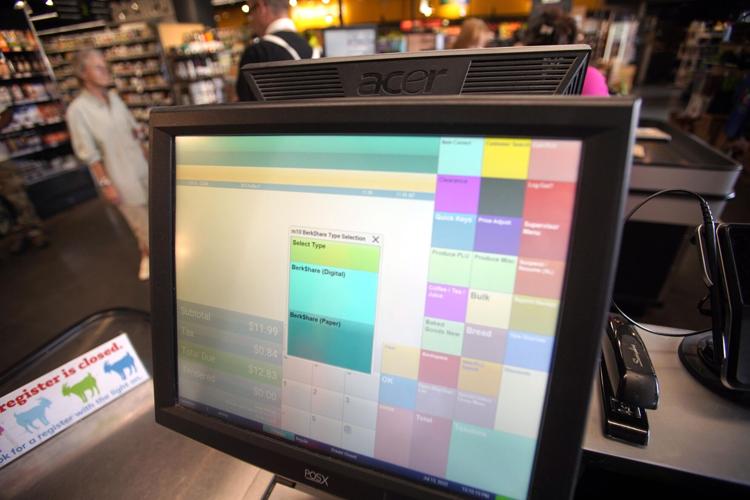 A cash register at the Berkshire Food Co-Op shows the option of using BerkShares for transactions. The market uses BerkShares at the register and with local vendors. 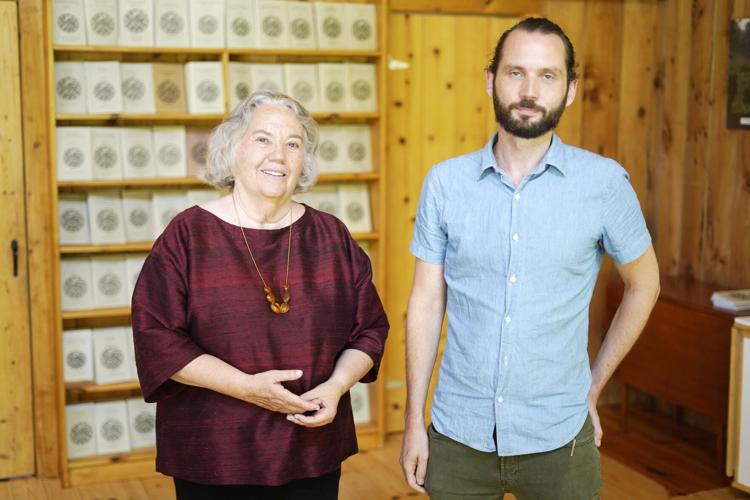 Susan Witt and Jared Spears of the Schumacher Center for a New Economics in South Egremont, which runs the BerkShares program. BerkShares are now in digital form, in addition to the original paper currency, you can purchase goods with an app on your phone using blockchain technology. 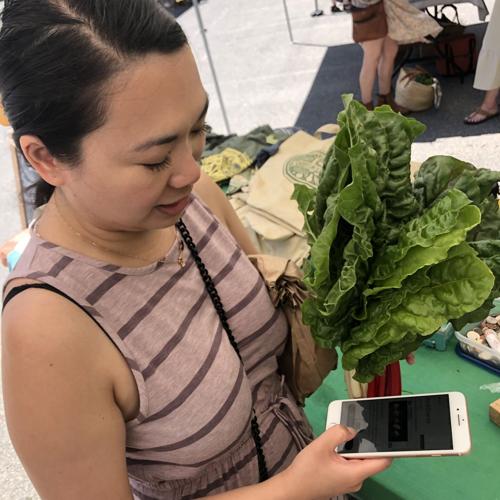 Fennie Wang is the founder and CEO of Humanity Cash, which developed the digital app for BerkShares. 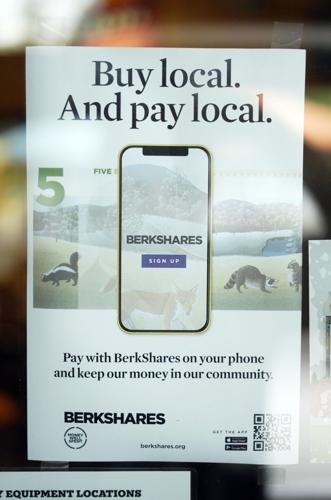 BerkShares are now in digital form, in addition to the original paper BerkShare currency, you can purchase goods with an app on your phone. The Berkshire Food Co-Op was one of the first businesses to begin using the new digital currency. 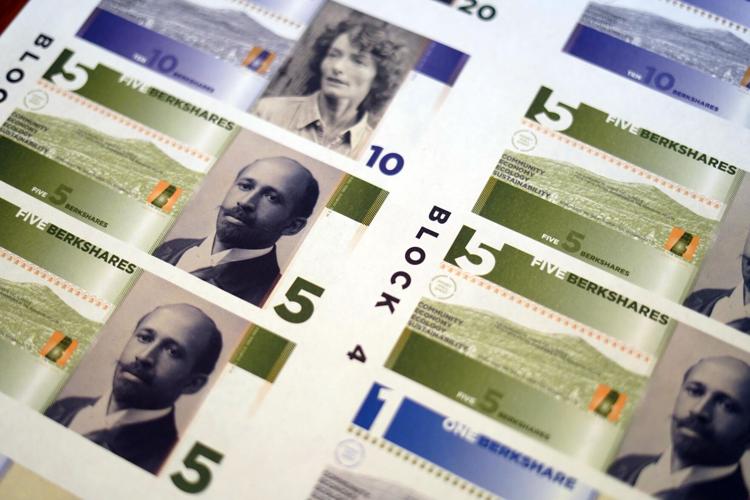 This is a proof of the original paper BerkShare currency, created on Crane paper at Excelsior Printing. The original BerkShare is still in circulation, along with the new digital currency.

EGREMONT — Robin Helfand founded Robin’s Candy Shop in 2004, two years before the launch of BerkShares, the county’s local currency. But she never accepted payment in BerkShares.

Now she does, using the nonprofit’s new digital currency, which eases transactions.

“It’s not only the right thing to do, it’s a smart thing for a business owner to do,” Helfand said.

BerkShares Inc. launched its digital app this year with a twist. Unlike some of the other players in digital currency — an often rough and tumble world where benefits are available, but the risks are great — BerkShares entered the market without selling its soul.

With the help of a company founded by a New York City-based lawyer, BerkShares digital currency reflects the nonprofit’s values of keeping money and goods circulating within the community and working with local banks.

What's in your (online) wallet? On their 15th anniversary, BerkShares will go digital

“The way we describe it is we’re bringing the blockchain to Main Street,” said Susan Witt, the executive director of the Schumacher Center for a New Economics in South Egremont, referring to the term that is used to record transactions in bitcoin or other cryptocurrencies across computers in a peer-to-peer network. The Schumacher Center oversees the BerkShares program.

According to Witt, no other local currency has a digital app set up like BerkShares.

“There’s one in South Africa that’s using the blockchain,” she said. “But it’s not going through the banks.”

BerkShares was founded as a local currency that could be used at participating businesses to keep money circulating throughout the Berkshire region. It was created to serve as a tool for community economic empowerment, and development toward regional self-reliance, according to its website.

That idea doesn’t fit with digital currencies, where banks and other traditional financial institutions are often bypassed.

“This is extremely innovative because it’s built a multipayment system on the blockchain but working with our local banks,” said Witt, who believes the system for BerkShares’ digital app could be used as a model for other currencies.

It took awhile for BerkShares to hit on the right formula for its digital app. In the beginning, engineers were interested in a different model.

“We had been approached by multiple crypto engineers who said we can build a digital BerkShares for you, but they were expecting to leap over the banks, in other words to exclude the local banks and make it a for-profit initiative,” Witt said. “BerkShares is a nonprofit. We feel currency should be a tool that serves a local community, not one that extracts profit for others.

“One of our conditions is that (the system) would work with our local banks,” Witt said. “The second condition was that the esthetics that we so carefully built into the paper currency featuring our local heroes through the artwork of local artists and highlighting some of our key natural resources be maintained, and that the nonprofit ethos that we had constructed be maintained. And that it would remain limited to the Berkshires, so that it wouldn’t be an app that mobile traders could come on.”

Enter Fennie Wang, founder and CEO of Humanity Cash, based in the New York City borough of Queens. Wang, who has worked as a lawyer with securities and regulatory agencies, came on board after a friend who works as the director of innovation for the International Red Cross told her what Witt was trying to accomplish.

“What I really liked about the BerkShares model is that even with the paper version they were working with the banks to hold the underlying dollar reserve so it was a one-for-one match local currency,” Wang said. “It was a regulatory sound model. If we could just lift that model into a digital framework.”

Instead of having a customer walk into a bank with federal dollars, Wang said the idea would be to create a “digital analog” where a bank account would serve as the tracking mechanism. “From that point forward, you’re making peer-to-peer transactions with the digital tokens,” she said. “It really functions as a form of digital cash.”

“The banks were a very, very important part of the equation,” she said.

There are pros and cons to digital currencies. On the plus side, transactions are faster, there are no fees, and there’s protection against fraud. The downsides include assets that are prone to volatility because digital currencies are not backed by a central bank, and not overseen by a regulatory agency.

Central Bank digital currencies are regulated and are issued by a country’s central bank. Virtual currents are unregulated, controlled by the developer or a founding group consisting of stakeholders that were involved in the process, according to investopedia.com.

Based on her experience in the field, Wang said digital currency creators don’t believe in either banks or regulatory agencies.

Humanity Cash began working on the system last year when it began sketching the designs for the app. Coding took place last fall, Wang said, and it was released at the end of March. The system that Humanity Cash built for BerkShares digital app was not based on any existing models.

“We built the core functionalities from scratch,” Wang said. “We kind of mapped those actions, we took user feedback, and that informed the design, the user experience and also the backend functionalities.”

And Humanity Cash is still tinkering with it.

“Nothing’s ever finished,” Wang said. “That’s the whole joke in software that you’re never done. You constantly have to meet the needs of your users.”

BerkShares Inc. may be a nonprofit, but the digital version till has to function in a competitive marketplace.

“BerkShares as a tool has to compete against commercial operators,” Wang said. “We’re competing against Pay Pal, all these multibillion dollar tech companies. Values do get you somewhere, but you still have to be able to compete in terms of basic use requirements so it’s always a work in progress to figure out how to improve. What’s the guerilla tactic that allows us to create and fulfill the core basic needs but add to the competitive advantages to what they’re building.”

An economic renewal is emerging in the Berkshires

“I don’t think we were surprised at the response,” said Jared Spears, the Schumacher Center’s director of communications and resources. “The center is is providing outreach to businesses that are interested in using the digital app.

“We were starting from a pretty strong base,” Spears said. “More businesses have been accepting our paper currency.”

The Berkshire Co-op Market in Great Barrington worked with both Wang and Spears to troubleshoot the digital app and roll it out in the store.

“It has been a great experience for us. We always accepted the paper BerkShares, but now that it’s gone digital it’s been a smooth ride,” said Hayley Ranolde, the market’s customer service manager.

“I think it’s going so well because everything has gone digital,” Ranolde said. “It’s taking away that first stop that people have to take to go to the bank and transition from paper cash to paper BerkShares. So it’s really easy for people to do it from their smartphones.”

It may be easy to use BerkShares’ digital app, but Helfand believes more information is needed to make it more popular, particularly among those who aren’t digitally inclined.

“What I see as the challenge are people that aren’t digital natives as opposed to 20-year-olds who can do this in their sleep,” said Helfand, who holds an MBA in marketing, works with the Community Development Corporation of South Berkshire, and helped found an entrepreneurs forum.

She believes BerkShares should implement an information campaign, possibly including a webinar, to teach local businesses about the advantages of using the digital app.

Chuck Leach, president of Lee Bank, said he’s happy his bank decided to back the program.

“I think, candidly, people here were a little nervous that I was interested in exploring this because crypto carries a bit of a stigma,” Leach said. “I viewed it as a way to make the Berkshires work better.”

The bank wouldn’t have gotten involved in the project if Wang hadn’t been there.

“She’s so smart and savvy that when she got involved I got a lot of confidence that the bank would be protected and that this is a way to continue along the path of supporting the Berkshires,” Leach said.” I think internally it’s hard for us as a small bank to take on new projects and initiatives. We have to pick our spots a little bit, Obviously, cryptocurrency comes with some controversy.”

Getting involved in the project was “really sort a very low risk foray into the world of digital currency,” he said.

Leach is also glad that the BerkShares program was able to enter the field while maintaining its values.

“They did pull it off,” he said. “It’s pretty genius actually.”

Lee Founders Weekend fundraising ripples through a variety of causes

Several hundred people joined in the celebration of the town’s 1777 incorporation, an annual tradition that has drawn locals and folks from around the region for years. For three days of Founders Weekend, a wide range of activities, food and games keep the attendees busy and entertained. But many may not realize that the fun-filled weekend plays a major role in funding charities in town and region-wide.