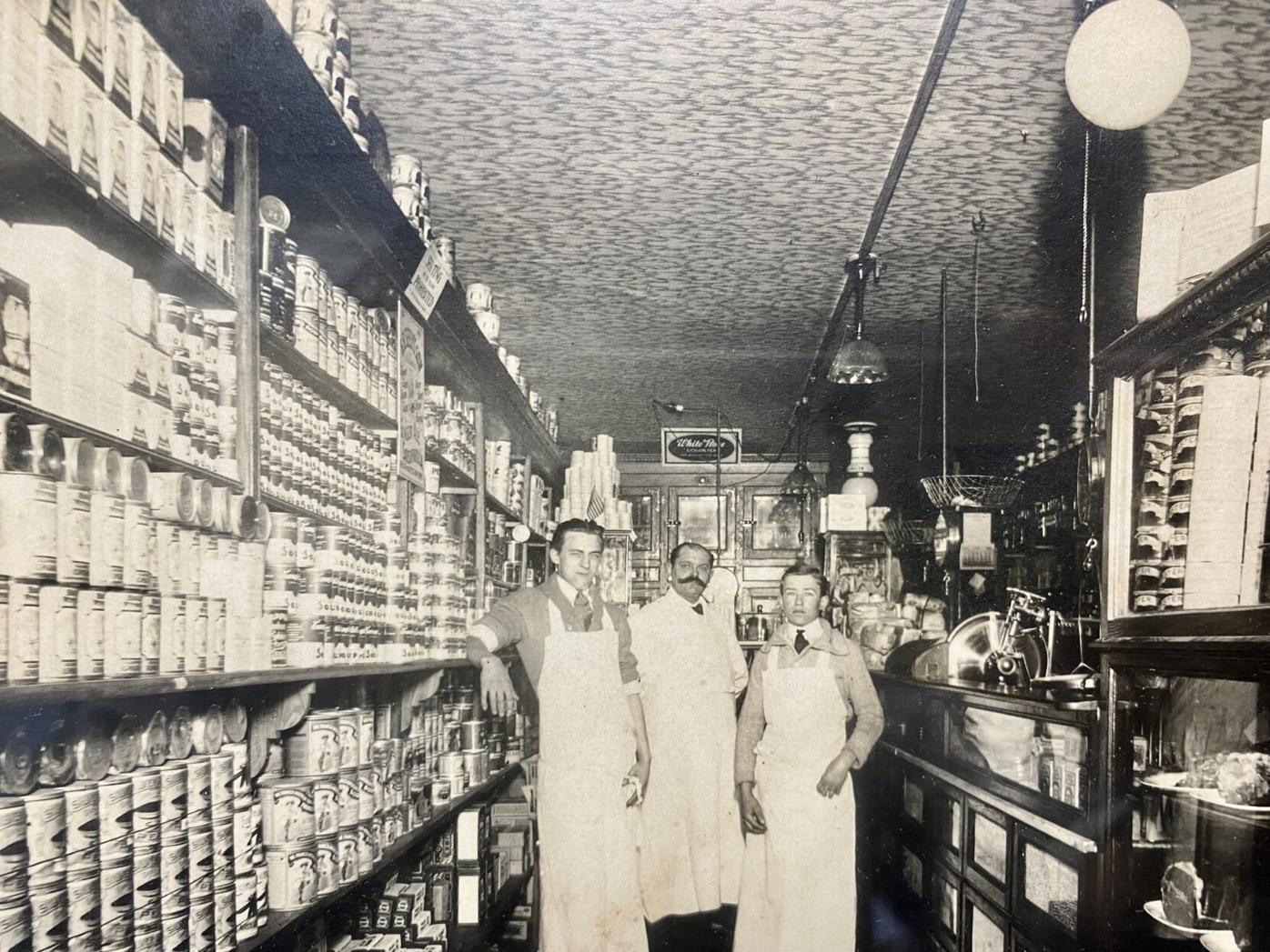 Here is what Wohrle's used to look like, at its location on Seymour Street in Pittsfield. John Wohrle is on the right. 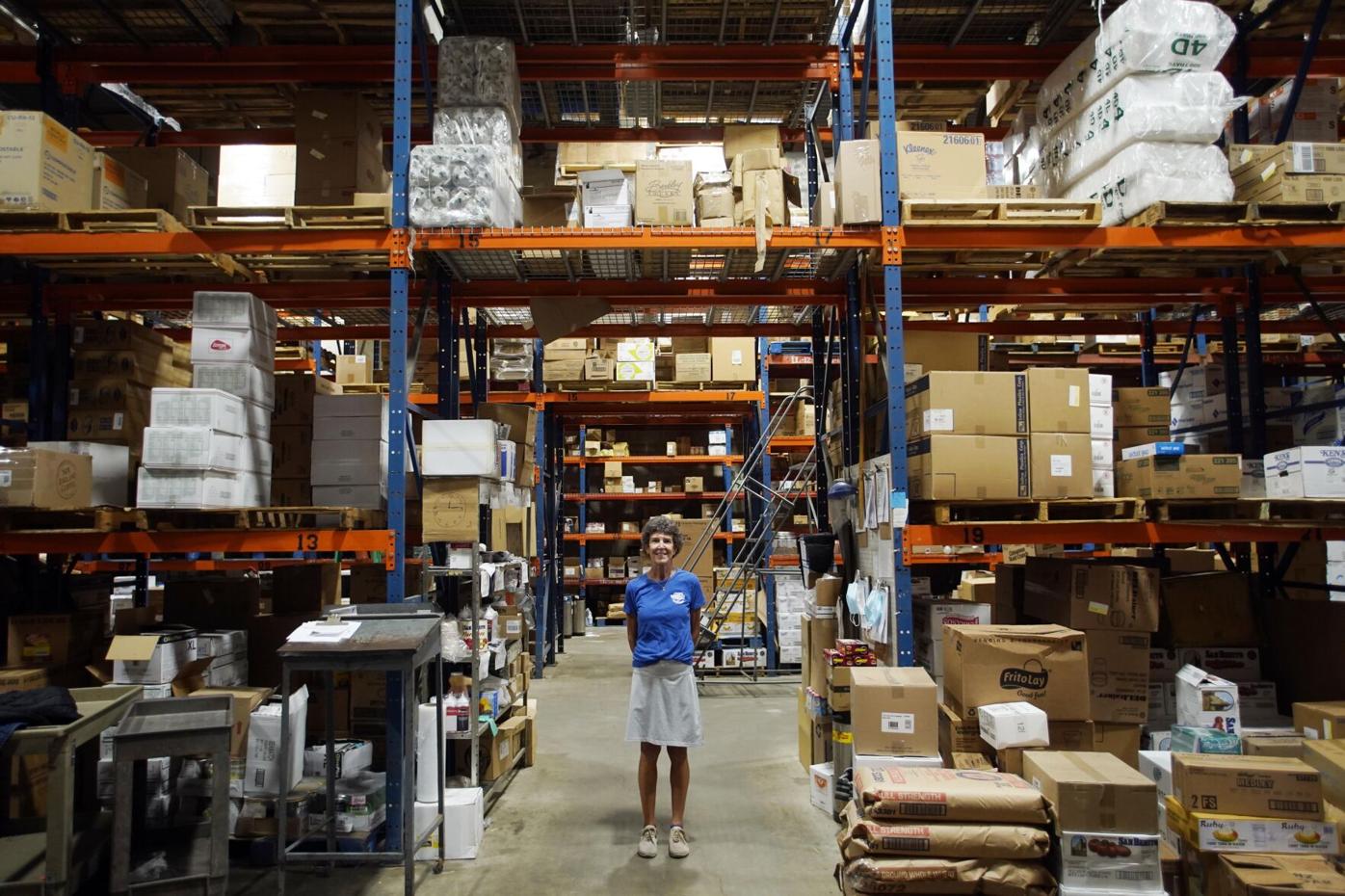 Lynn Kessler and her husband, Rob, now run the business. They are part of a four-generation lineage that has been in charge of the company. 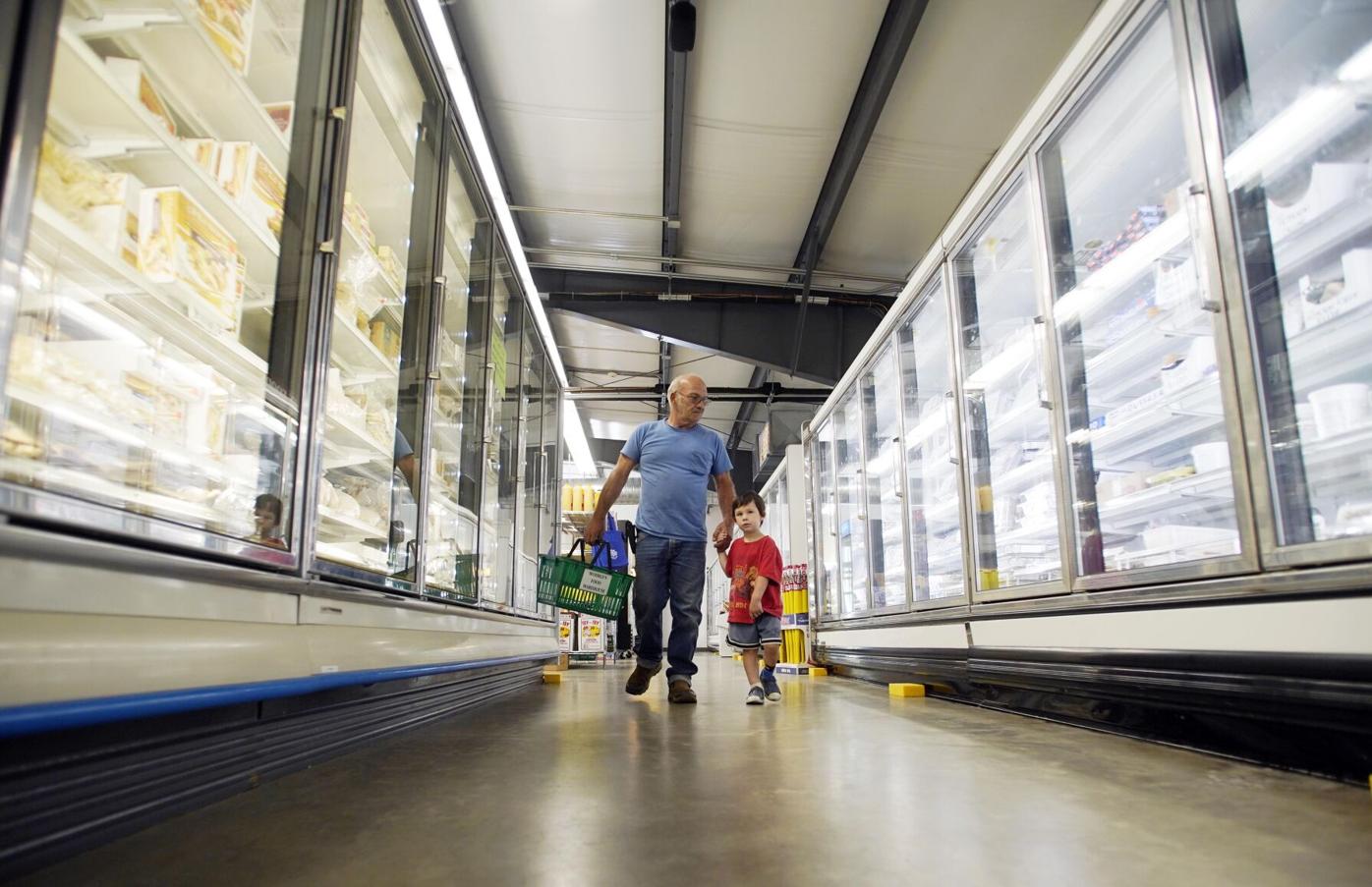 A gentleman and his grandson wander the aisles at Wohrle’s Foods in Pittsfield. 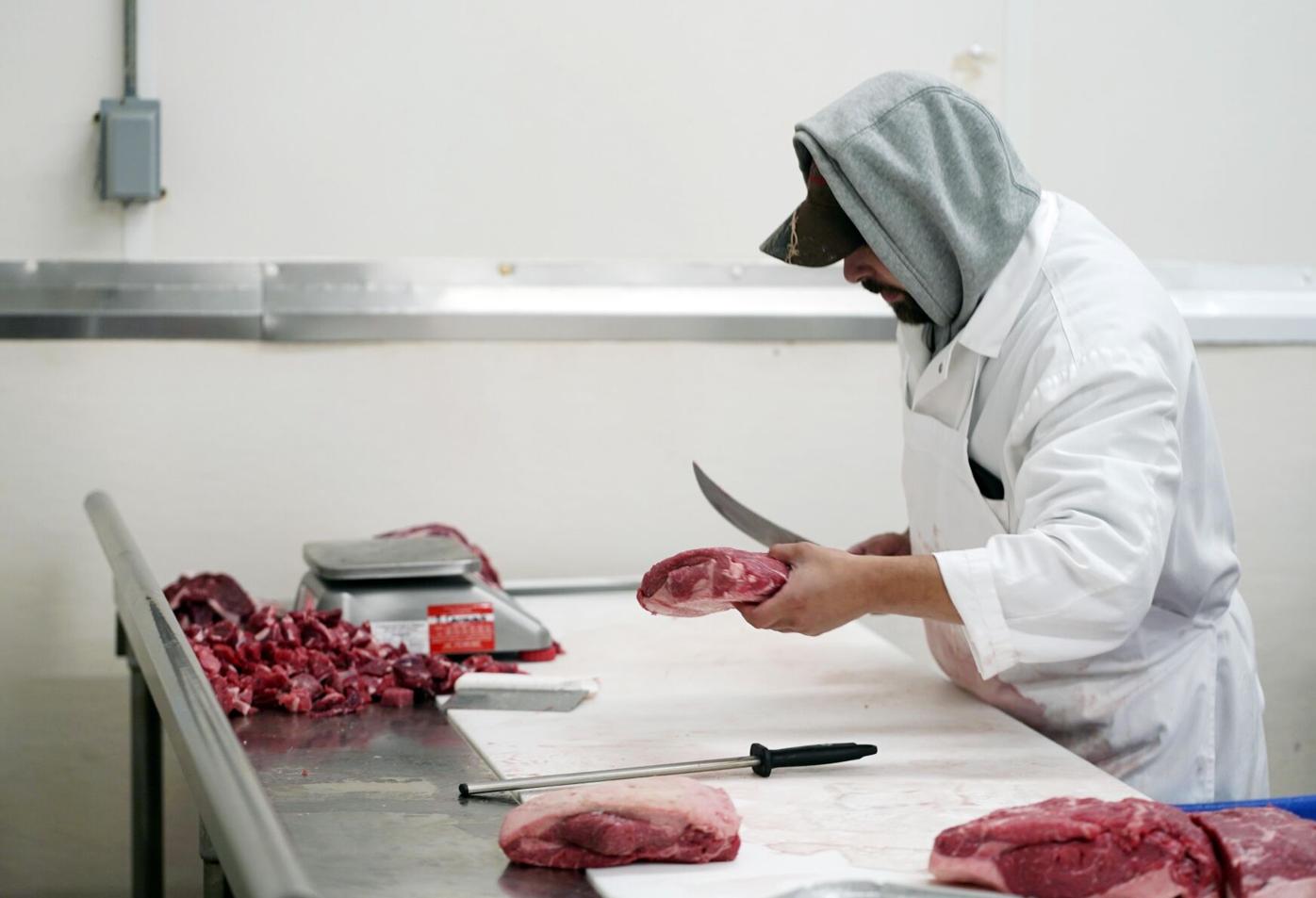 The warehouse at Wohrle’s Foods in Pittsfield is vast, refrigerated and even has room for a butcher. 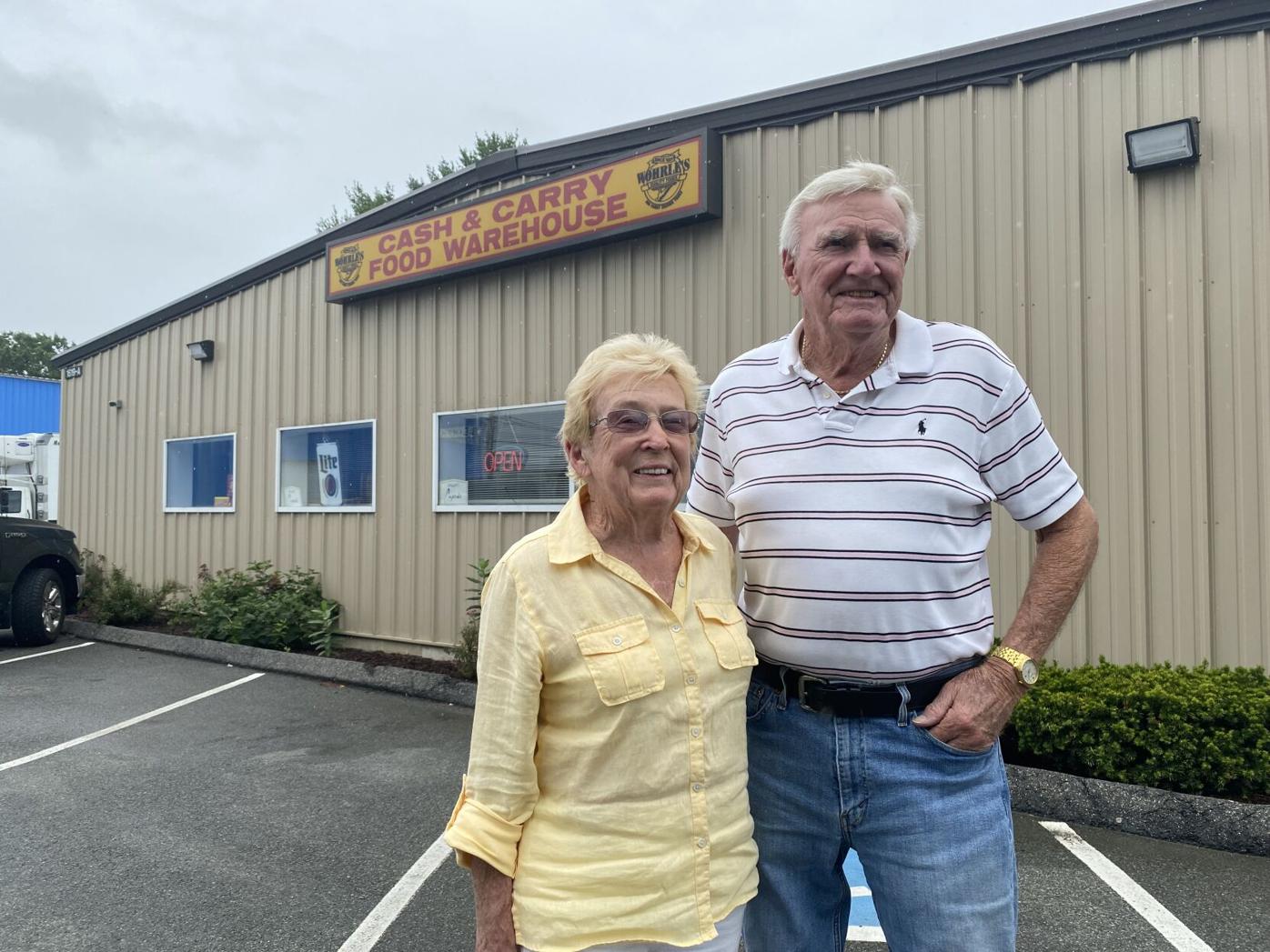 Barbara and Walter Pickwell handled the day-to-day duties for decades at Wohrle’s Foods in Pittsfield. Barbara is the daughter of John Wohrle, a name that has been synonymous with high-quality meats since 1921.

PITTSFIELD — Barbara Pickwell, a daughter of the man who started all this, moves on swift feet through a series of plastic flap doors. She could navigate this refrigerated maze off East Street blindfolded.

Her well-worn route across cement floors eventually leads to room temperature, to a wood-paneled office where an old grandfather clock divvies out the progression of time tick by tock, an auditory equivalent to a perpetual string of matching baby frankfurters.

Seconds have added up to a century for Wohrle’s Foods Inc., a food supplier mostly known for its meats, its four generations of family operation in an industry dominated by national firms and for an origin story inked by split-second decision-making.

Today, dozens of products carry the Wohrle’s label. Six Wohrle’s wholesale delivery trucks still share the road, beginning at sunrise, with the likes of Sysco and US Foods. Despite a BJ’s Wholesale Club right up the road, Wohrle’s operates a bustling food warehouse open to the public and that — ahem — doesn’t charge membership fees.

Pickwell, who is semiretired but who still does the math here monthly by means of an adding machine, says the secret to survival is “Work hard, very hard.”

“And have the patience to go through it, despite the troubles,” chimes in her husband, Walter, also semiretired. His desk is adjacent to that of his wife. The two, married 65 years, took over the business in 1969 upon the death of the man who started all this.

Turn the clock back to July 1914, and Barbara Pickwell’s father, John W. Wohrle (pronounced WHIRL-ee), had a quick change of mind that eventually would alter the course of Pittsfield’s dietary bill of fare for decades to come.

He was an 18-year-old meat cutter from Germany’s Black Forest region. He just had completed what he had thought would be his last round-trip sea crossing to New York on a German steamship — oddly enough, named for George Washington — where he worked as a cook’s helper.

Back in port in Germany, his bags packed, he planned to make his way back to his hometown of Wolfach to begin his career as a wurstmacher. But, at the last minute, he was talked into staying put, to making just one more trip. Good thing.

While the ship was back out on the high seas, World War I broke out. Had Wohrle not agreed to this last trip, he likely would have been pulling on high leather boots to serve as a foot soldier in the Imperial German Army. Upon arrival in New York City, the ship was seized by U.S. authorities, and Wohrle would make another consequential decision.

With his experience as a meat cutter, he took jobs at delicatessens in the New York City region. At the end of the war, he returned to Germany and legally reentered the U.S., eventually becoming a citizen.

Turn the clock to 1921, 100 years ago, and Wohrle opened shop in Pittsfield. That is to say, he made frankfurters, sausage and luncheon meats from sides of beef and pork that he pulled off refrigerated rail cars. He sold his specialty meats first from a horse-drawn cart.

He had learned of the Berkshires through a friend who had settled here among a sizable German immigrant community. Wohrle generated a customer base that literally ate it all up.

Old, undated newspaper advertisements, dry and fragile as autumn leaves, tell of how “Pittsfield hostesses” with discriminating tastes preferred Wohrle’s “Health Brand” label of meats over all the rest.

In the meantime, Wohrle had met a young lady from Connecticut, Anna Ungewitter. The two married in 1922 and eventually had four daughters, one of whom died at an early age.

Wohrle soon opened his first brick-and-mortar store, at 137 Wahconah St. As business picked up in a city of meat eaters, he purchased Eberwein’s bologna factory at 157 Seymour St., where he expanded operations to include wholesale distribution, mainly to the many small, family-run grocery stores that now are nearly extinct.

Pickwell, who was raised in an apartment above the storefront on Seymour Street, recalls how she would be pressed to the task of making boxes for orders and peeling the skin off of hot dogs, thousands of hot dogs, too many to count.

She recalls how her father diligently shed his German accent through membership to a speakers club of German immigrants. They regularly would meet and simply talk and talk — until their w’s, for instance, no longer sounded like v’s.

“He said to us, ‘We are not Germans; we are Americans,’ ” Pickwell recalls.

As the clock ticked, he became a civic leader, a Lion, a Shriner, a Mason, a member of the Zion Lutheran Church, a governor of the Loyal Order of Moose. In May 1936, he was named “Man of the Month” in Pittsfield, in acknowledgement of his sportsmanship (he was a skilled angler and hunter).

When it came time to buy a mincemaster, he bought a giant mincemaster. He made sure his delivery trucks were dustproof and that his meat-processing plant was cleaned each evening with boiling water and disinfectant. He kept a pickle rack that he considered good luck. He kept church groups, kids' sports leagues and volunteer organizations well-fed.

John and Anna Wohrle celebrated their 25th wedding anniversary with a party at Turn Hall on Seymour Street, in 1947. The Eagle did a write-up on it. The party included a celebration of 25 years in business. The Wohrles presented their employees with gifts. The Wohrles, too, were presented with gifts. A turkey meal was served. Dancing followed.

“He was fun-loving,” Pickwell says of her father. She herself keeps a painting on her office wall of frankfurters on skis, zipping down a mountain — because, why not?

The story behind those famous Wohrle's baby hot dogs

Perhaps most famously, Wohrle, in the early 1940s, drew upon German recipes to develop what has become a blue-collar Pittsfield classic — a smoked 4 1/4-inch-long, part-beef, part-pork hot dog in a natural casing (aka, the baby frankfurter, a bestseller).

In 1957, Wohrle bought the U.S. Beef and Provision Corp. building at 1619 East St. That has been home base for Wohrle’s since then, and it includes the retail store. Over the years, a meat smoker and processing plant were added, as were new offices, freezers and warehouse space to accommodate an expanded wholesale business. Clients for the wholesale business include restaurants, schools, nursing homes, jails, camps and hospitals.

Among Wohrle’s 32 employees are three generations of descendants of the man who started all this. The Pickwells’ son, Jon, recently retired. Their daughter, Lynn Kessler, and her husband, Rob, now run the business. In 2014, Luke Kessler, great-grandson of John Wohrle, joined the team.

Barbara Pickwell does the math. Wohrle’s survived the stock market crash of 1929; the Great Depression; food and fuel rationing during World War II; skyrocketing interest rates in the 1980s; the closing of small grocery stores; and a pandemic. Not to mention a devastating fire at the facility in 1995, delivery truck breakdowns, changes in U.S. Department of Agriculture rules and regulations, you name it.

What keeps customers coming back to Wohrle’s? A sense of community, family and those darn hot dogs

“The numbers tell the story,” she says. Wohrle’s does more than $10 million in sales a year.

“Thank the good Lord,” she says, hastening to add, “What makes us proudest is that we’ve been able to keep the business going though thick and thin, with now the fourth generation. This is something I’m sure would please my dad.”

Our Opinion: For 100 years, Wohrle's has been good to Pittsfield

In 1921, a German immigrant made Pittsfield his home base for living the American dream. A century later, Wohrle's is a Berkshire institution that continues to represent our community's values and unique grit.