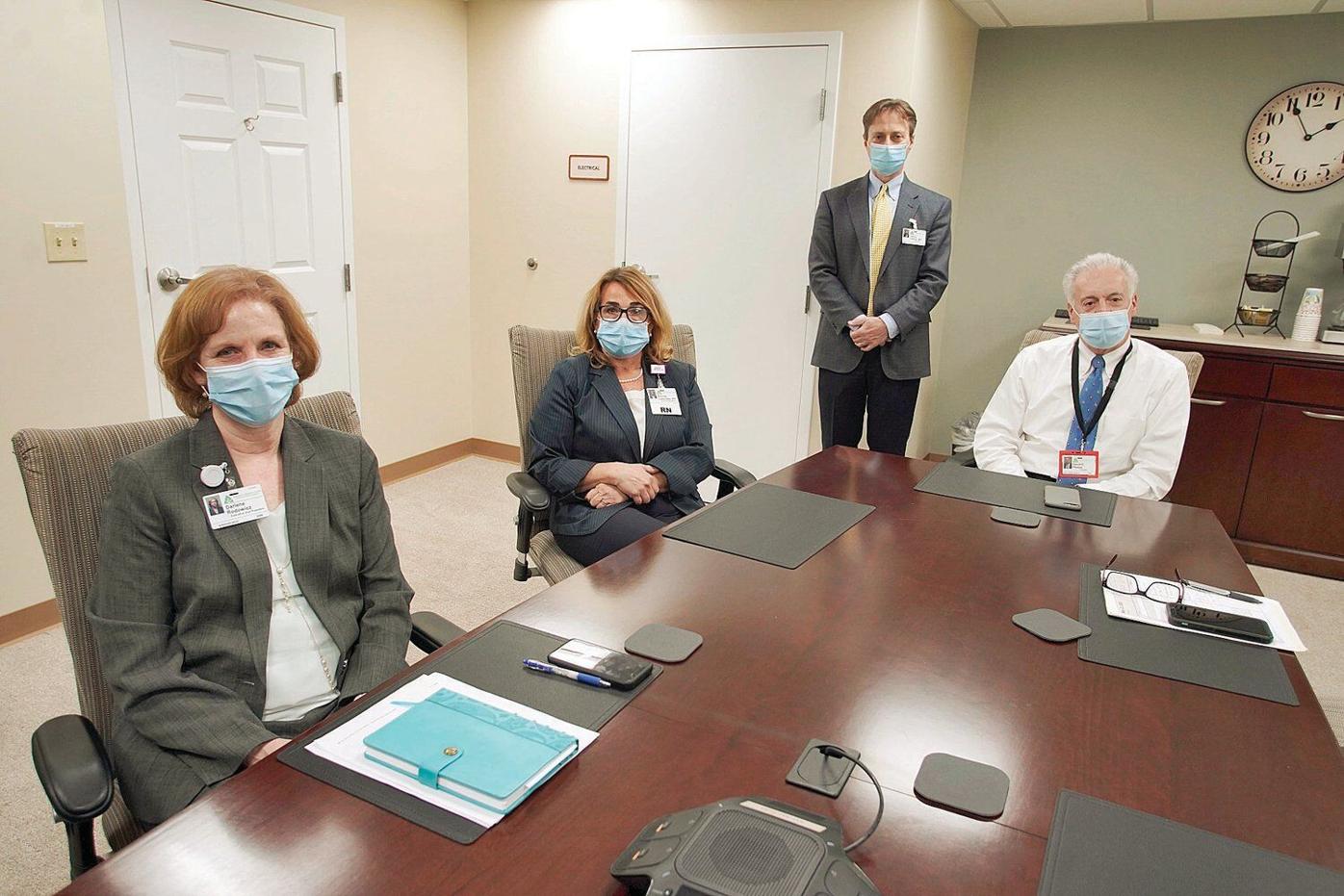 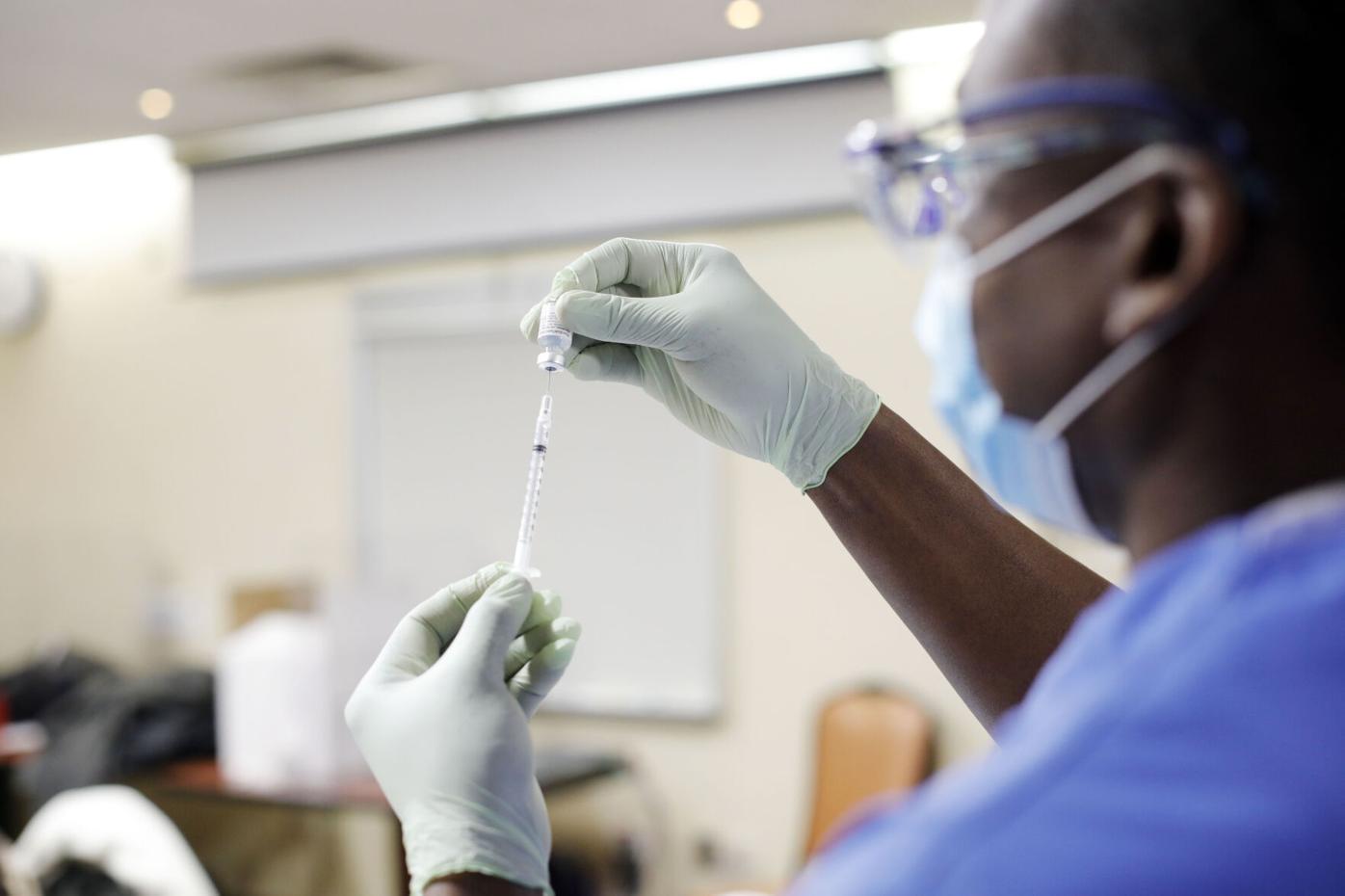 Registered nurse Nixon St. Bernard draws a dose of Pfizer’s COVID-19 vaccine into a syringe during the first round of hospital employee inoculations in December at Berkshire Medical Center in Pittsfield.

The Berkshire Eagle spoke with Berkshire Health Systems leaders Friday, just after they announced that COVID-19 vaccines would be mandatory for all their employees by Oct. 1. They spoke about the illness (none of their seven patients is in critical care, and the vaccinated aren’t as sick), what they believe is the safety of the vaccine’s mechanisms, how they’ll address union concerns, and that medical exemptions will be granted only in a few “bizarre” circumstances.

Officials also say that they haven’t seen many serious adverse reactions to the vaccines.

“A small number of employees reported side effects, and they were minor and short in duration, and included low-grade fever, chills, body aches and/or headache,” said Michael Leary, director of communications at BHS. “Out of over 3,200 vaccines administered, we had a report of one serious reaction, and our monitoring clinicians responded quickly and appropriately. The [Centers for Disease Control and Prevention] describes such reactions as very rare.”

The Berkshire Eagle: The Massachusetts Nurses Association, the union that represents members at Berkshire Health Systems, currently opposes vaccine mandates, though it encourages vaccination. The union’s spokesman said that a major barrier for some is the FDA’s not having fully approved the vaccines, though most union members statewide are vaccinated. The union wants more information about how getting shots could affect policies like earned sick leave, and for those who require exemptions. What would constitute medical and religious exemptions?

David Phelps, president and CEO: It’s not the first time we’ve had mandatory vaccinations here at the hospital, and we do have some experience, and the union is aware of that — we’ll work with them. Part of the reason we’re taking so much time — Oct. 1 — it gives us time to have those meaningful discussions with not just the union, but all our employees. Because there are people who have legitimate things they want to talk about, about vaccinations and exemptions.

BE: There may be some people who can’t be vaccinated or who refuse under exemptions, which BHS said it will consider. How would that work?

Dr. James Lederer, chief medical officer/chief quality officer: Unlike the flu shot, which is produced in chicken eggs, and certain other biologic production vehicles, [the COVID vaccine] is produced in really a machine that has nucleotides that put them all together into an mRNA molecule that is enveloped by fat molecules. And so there’s nothing biologic in here except perhaps a little bit of a fat molecule known as polyethylene glycol. And the likelihood of having a polyethylene glycol allergy is nigh on to unknown.

There are a few people who have had plastic surgery injections to puff up wrinkles, and some of those folks have had allergic reactions to a COVID vaccine. But, short of that, there’s nothing like the flu vaccine and all the allergies that were manifest with people who had egg allergies or other protein-based allergies. This is a machine-based production. There’s nothing in the production vehicle, in the production line, that uses eggs, or any other human components or animal components. So, it is about as clean and as risk free as it comes. And so I think, to have a medical exemption, you would really have to have a very bizarre set of circumstances. I expect we’ll have less than one or two medical exemptions.

BE: You said about 80 percent of BHS employees are vaccinated. Does the hospital have any sense of the reasons for the hesitancy for the others?

Phelps: I think it’s like everywhere — it’s all over. Just because we happen to have chosen health care as a career, we’re not that different in the way we think about important issues. In this one, there are lot of folks who just have strong opinions, there are many who are hesitant because of the FDA approval not having been finalized, and we will see what happens when that’s done and how many are still left that still have some concern.

BE: The Eagle has received anonymous reports of a small outbreak among staff at Berkshire Medical Center. What is going on here, and how will BHS handle employees who test positive?

Darlene Rodowicz, executive vice president: At Berkshire Medical Center, we currently have nine inpatients [this dropped to seven on Monday]. In the last seven days, we’ve tested over 3,000 people in the [larger] community, and we’ve had a 3 percent positivity rate — so, about 98 people have been positive. When we look at it amongst our employees, we’ve got a positivity rate of 0.3 percent, a tenth of what the community spread is. So, we have some positives here, but nothing that is overwhelming by any means. And it seems to be split between those that are vaccinated and unvaccinated.

BE: Of those nine patients, how many are vaccinated, and how sick are they?

Phelps: They’re all on different floors, which is different than the last time.

BE: Do people with family who are immunocompromised need to worry about the virus currently moving through the Berkshires? Is the virus more gentle this time around?

Lederer: If you have immunocompromised family members, and you’re not vaccinated, then really, the things you ought to do are one, immediately go get vaccinated and, two, use all the precautions that we have been using in the hospital setting, knowing that we were going to have positive patients.

And we know, and it’s supported by the CDC that, as long as we are masked as providers, and the patients are masked, as positive patients, that the contact exposure is considered low risk. And so that’s how we’ve been living in the hospital for these last 18 months. But, vaccination is a step beyond, because even in the situation that we see here today, those people who are admitted and have been vaccinated have much more mild disease than ever occurred back in February.

Nationally, patients out there who are unvaccinated, if you are in the [age] 20 to 29 demographic — our biggest unvaccinated demographic — or if you are in the less than age 12 group that cannot be vaccinated, we’re seeing significant illness. This is not something that you want to take lightly. So, for the 20- to 29-year-olds, they definitely need to understand that they can suffer consequences of a COVID infection and, more importantly, if you have a family that has young ones under age 12 it’s going to be the family members that are likely going to bring this home if they’re not vaccinated and likely infect their children.

And children are not immune to the severe effects of COVID. Some of the children’s hospitals nationwide are filling up with COVID infections, particularly in Florida and Louisiana. And these are not situations you want to put your children into.

BE: What role is the delta variant playing in the Berkshires right now?

Lederer: The expectation is that the delta variant is the predominant variant in Massachusetts, and our initial outbreak in North Adams Commons is being genotyped by the state. We sent them [a swab from each case]. I haven’t heard the results, but in talking to the medical director of the Department of Public Health, it was felt to be, first, second, and third, that this will be the delta variant. Nationally, the delta variant accounts for over 85 percent of all infections.

Phelps: We’re proud of the work our staff has done, and how seriously they have taken keeping our patients safe during this pandemic. And for about 80 percent of them, they’ve been vaccinated, and we need to do a little bit better, and we know we need to pursue the mandate.

It’s also important that people in our community start to understand just how important it is for them to consider vaccination if they haven’t. And over the next several weeks, we expect to talk more about that to our community, as directly as we possibly can. Because we want to be helpful to those who want to do want to take that next step.