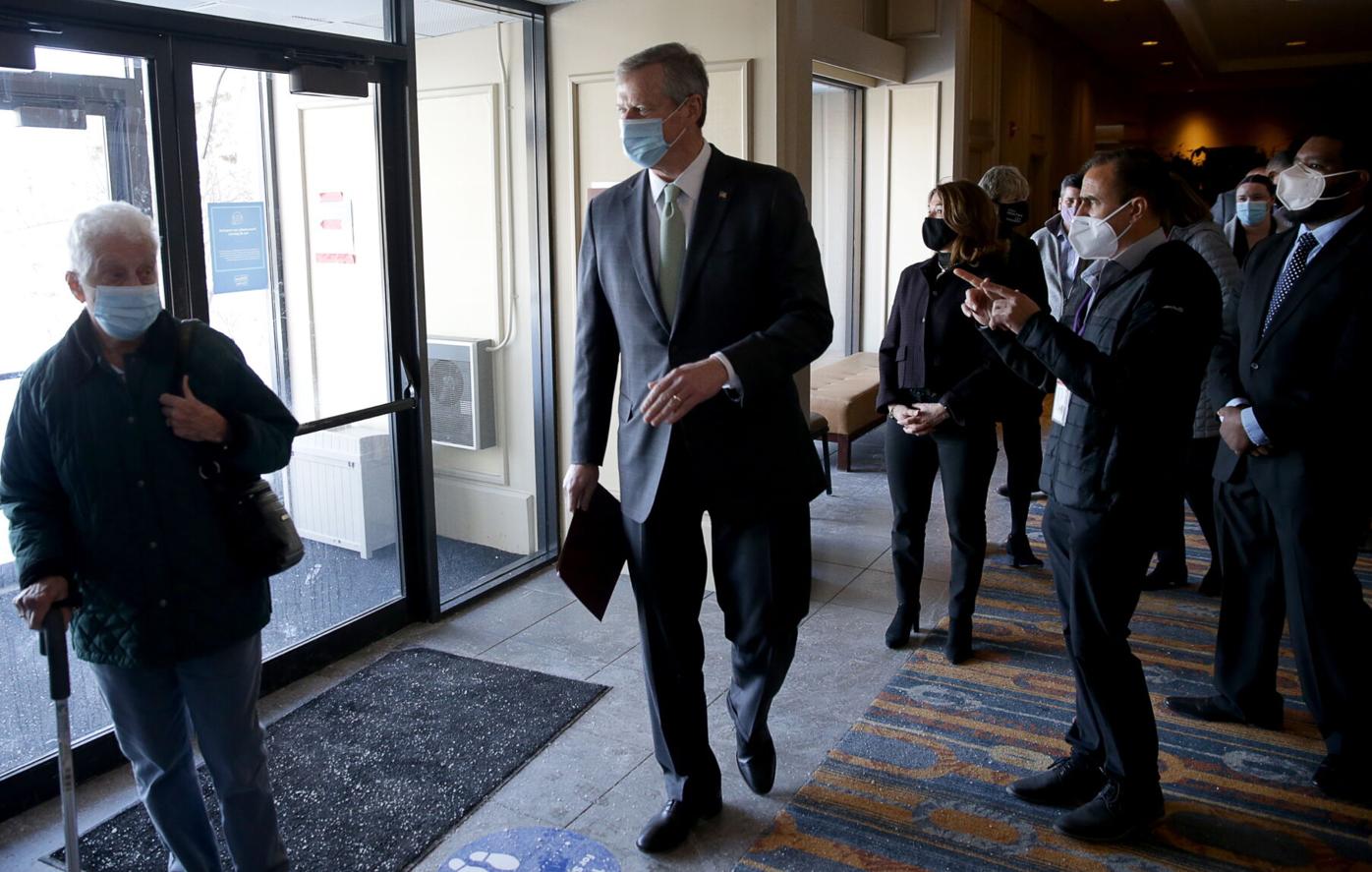 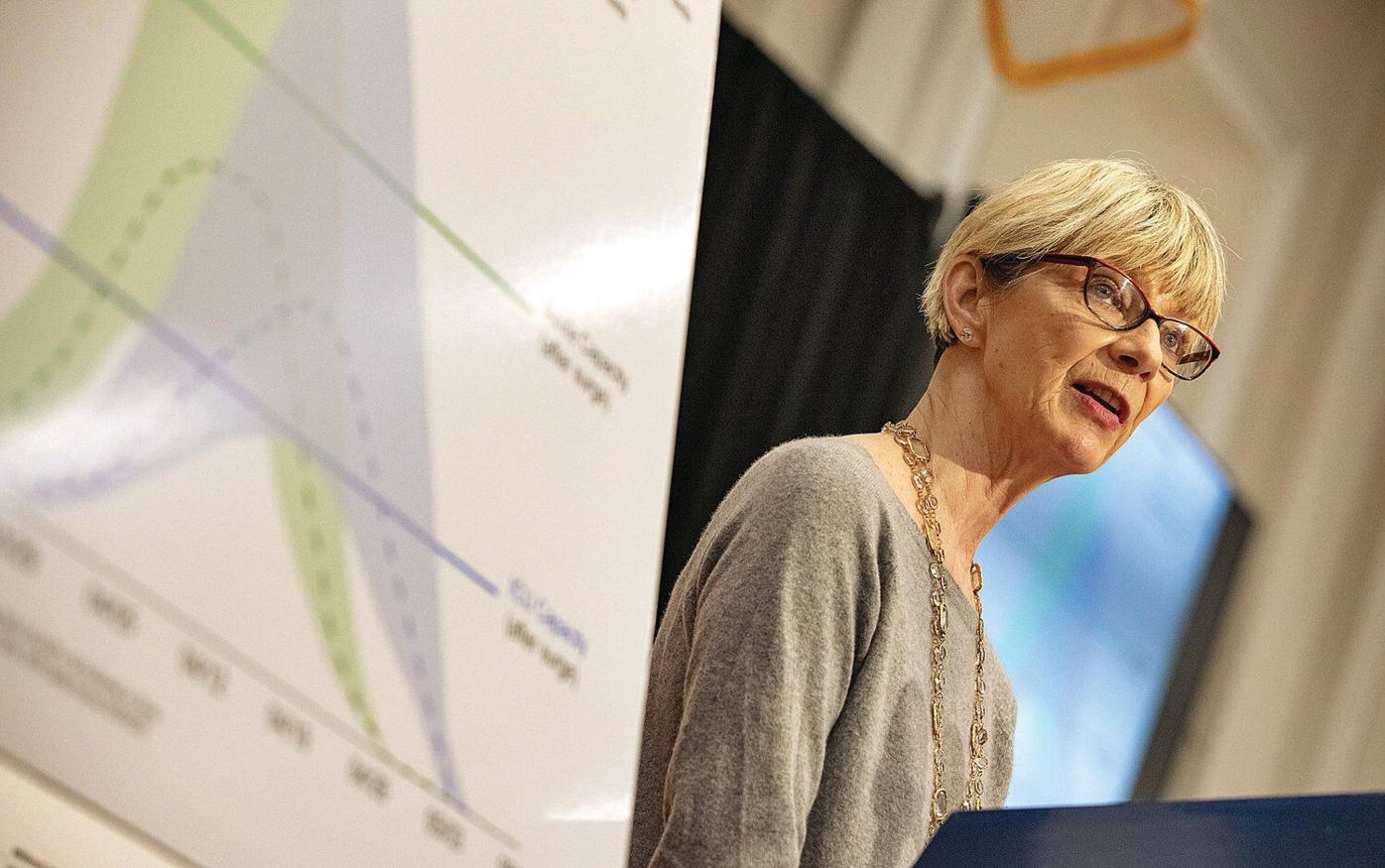 Health and Human Services Secretary Marylou Sudders said Wednesday that people who accompany seniors 75 and older also can get a coronavirus vaccine shot at any of the state's mass-vaccination sites.

Health and Human Services Secretary Marylou Sudders said Wednesday that people who accompany seniors 75 and older also can get a coronavirus vaccine shot at any of the state's mass-vaccination sites.

Anyone — but only one person — who accompanies a senior 75 or older to get a COVID-19 vaccine at some of the state's public vaccination sites will be eligible starting Thursday to get a shot themselves, Gov. Charlie Baker said, detailing a new plan Wednesday to try to reach as many elderly residents as possible.

The new guidelines, which primarily are targeted at mass-vaccination sites, also apply to Berkshire County's three public clinics, according to local vaccine coordinators.

Leslie Drager, lead public health nurse with the Berkshire Public Health Alliance, stressed that the new policy is not retroactive, which means someone who previously had accompanied a senior to a clinic will not get a vaccine if they show up alone.But, anyone who accompanies an eligible recipient to their second-dose clinic will be able to receive their first dose at that time.

Local clinic coordinators have asked friends and family to register for the clinics along with their loved ones. Registration links and tips can be found at getvaccinatedberkshires.org.

Drager said accompanying caregivers can mark "Non-COVID facing health care worker" when signing up, since the state's registration website did not include a separate designation as of Wednesday afternoon.

"We don't want people who aren't eligible to show up and to have to turn everybody away," she said. "We want everyone to have an appointment so things run smoothly at the clinics."

Baker said the new policy was designed to better reach a population that he described as being at a significantly higher risk of being hospitalized or dying from COVID-19 than those even slightly younger. With a little over a week of experience vaccinating the 75-and-older population, the governor said health officials have learned that many "might be hesitant to go to a mass-vaccination site without a relative or a caregiver."

In Berkshire County, local coordinators welcomed the chance to get more shots into arms and are advocating for the state to move on to the next part of Phase Two, as hundreds of appointments go unfilled.

Drager said that only 200 of 700 slots were booked for Wednesday's clinic at Berkshire Community College. Vaccine doses allocated to a clinic but not used on that day can continue to be stored and used at a later date.

So far, an estimated 45 percent of the county's over-75 population have received a vaccine through public clinics, according to the Berkshire Vaccine Collaborative. That percentage does not include vaccinations at local pharmacies or the substantial number of on-site clinics that took place at long-term care homes, assisted living and other residential facilities.

Though it is not clear precisely why demand has dropped in recent days, Drager said she suspects that many eligible residents either have received a shot already or lack transportation to get to the public clinics. She hopes the state's new guidelines will boost turnout, at least until the county can move on to the next segment of Phase Two.

"This will help," she said. "But, I also think it's time to hit the next age group and people with comorbidities."

Baker's announcement, though, encountered some pushback online and in other forums from some lawmakers and public health advocates who worried that the policy could exacerbate already stark inequities in the distribution of vaccines.

Other residents expressed frustration that they or someone they knew who still is ineligible to be vaccinated already had brought a loved one older than 75 to get a shot, or questioned the decision to allow younger healthier residents to jump ahead of people with underlying health risks and those ages 65 to 74.

Baker defended his choice to move ahead with the policy, suggesting that, in many cases, it could be spouses or relatives in their mid-60s to early 70s who end up accompanying the older residents to get the vaccine.

"I think what's more likely to happen is, you'll get more of the 75-year-old community to come and get vaccinated because they'll be willing to ask someone to help them come with them, and that will make it easier to move into the next round," Baker said.

The governor announced the new companion policy from the DoubleTree Hotel in Danvers, where he, Lt. Gov. Karyn Polito and Health and Human Services Secretary Marylou Sudders were touring one of the state's mass-vaccination sites.

"We've been picking up the pace and we're on track to have over 1 million doses administered very soon," Baker said.

The Department of Public Health reported Tuesday that of the 1,283,700 vaccine doses shipped to Massachusetts so far, 910,412 doses, or about 70.9 percent, had been administered.

With Massachusetts now receiving about 108,000 doses of Pfizer and Cambridge-based Moderna vaccine a week from the federal government, Baker and Sudders said the state will post 100,000 first-dose appointments this week.

"Ultimately, we have to rely on a supply we receive from the federal government, but we will be ready to do more when more vaccine is available," Baker said.

Asked during an earlier briefing about providers reportedly giving away unused shots to patients regardless of eligibility if the doses had been thawed but not used before the end of the day, Sudders said that is not the state's official policy, but the administration also does not want to see doses wasted.

As of last week, the administration said 1,096 doses of Moderna and 176 doses of Pfizer vaccines had been reported wasted, or 0.13 percent of doses shipped here.

The decision to allow trusted family, friends, neighbors or caregivers, regardless of age or health status, to get vaccinated along with vulnerable seniors came after consultation with councils on aging and other advocates for older adults.

Sudders said the hope is that it will provide an "extra level of comfort to those who may be hesitant or don't want to bother their caregiver or loved one or a good friend to book an appointment."

The Cambridge Democrat said the life expectancy in some of the hardest-hit communities in Massachusetts is under 75, and he said it was a "kind of a privilege" to have a child or caregiver with the time to take a senior citizen for a vaccination.

"While I can see the value and practicality of this latest move ... this must be paired with a more intensive focus on working with the local partners that are best equipped to serve people most impacted and the most vulnerable where they are at," Connolly emailed. "Otherwise the alarming inequities of the state's vaccine program are apt to persist."

Some decry vaccine 'buddy system' access as unfair and unsafe. Why a Berkshires group stepped in to help

When Gov. Charlie Baker announced that people could be vaccinated by bringing eligible seniors to certain clinics, the pushback was swift.