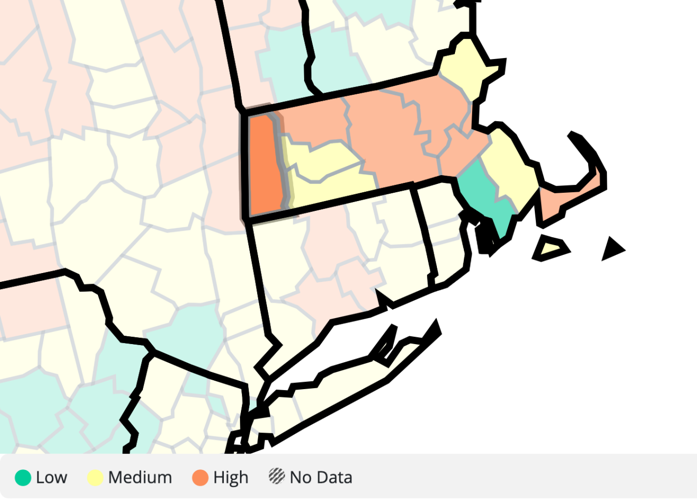 Berkshire County this week joined the CDC's list of Massachusetts counties with a "high" level of COVID-19 in the community. 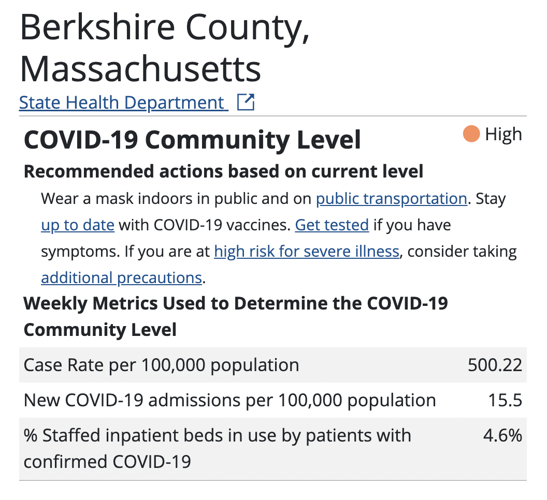 The summary posted Friday by the CDC on Berkshire County's COVID-19 community status.

Give the Mother’s Day gift, Boston health officials said Friday, that makes sure your presence at gatherings this Sunday won’t keep on giving.

Giving exposure to COVID-19, that is.

By being tested first.

Both the Boston area and Berkshire County are back in what the federal Centers for Disease Control and Prevention terms “high” community levels of COVID-19.

Under that status, affixed to seven Massachusetts counties late this week, people are advised to wear masks in public places, regardless of their vaccination status.

Franklin and Worcester counties are also at the “high” status, with Hampshire and Hampden counties remaining at the CDC’s “medium” level, where Berkshire County had been until this week.

Rising hospitalization is believed to be the reason many counties moved to “high.” The federal agency considers the number of hospital beds used, along with hospital admissions and the number of new cases in an area, in determining community risk.

As The Eagle reported Friday, the rising numbers in Berkshire County are linked to two new omicron sub-variants. Most of the country is seeing similar increases that are driving new hospitalizations. Cases are up in all but four states and U.S. territories.

So far, however, the case numbers are not proving to be as lethal as past surges.

“Since we’re not seeing deaths yet from this, maybe it’s a less virulent strain, but it is certainly present,” Dr. James Lederer, chief medical officer and chief quality officer at Berkshire Health Systems in Pittsfield, said Thursday.

“We’re not done yet; we’re going to see increases in numbers."

The new strains are highly transmissible and are infecting even people who have been vaccinated. “We’re not done yet; we’re going to see increases in numbers,” Lederer said.

Berkshire Medical Center had nine inpatients with COVID-19 as of Friday, up from eight Thursday and seven Wednesday.

In the past week, Berkshire County had 718 newly confirmed COVID-19 cases, lifting the total during the pandemic from 24,526 to 25,244. As of Friday, 146 new daily cases were reported. Due to the availability of home testing, official numbers are no longer believed to provide a complete count of cases.

The state Department of Public Health reported Friday that 567 people are hospitalized with the virus in Massachusetts.

The state saw 17 new deaths, pushing the pandemic total to 19,198. In Berkshire County, two deaths in the past week were linked to the virus, for a total of 377.

Pittsfield Health Department Director Andy Cambi offered slight optimism during a presentation to the City Council on Tuesday evening, saying that data from the city's weekly sewage testing show that the case wave may be cresting.

New daily cases of COVID-19 in Berkshire County pushed the region this week to the top of national lists, second only to a Connecticut county in the continental U.S.

The why of COVID-19’s ‘fifth wave’ in the Berkshires

Why, we asked three local experts, did Berkshire County find its way this week nearly to the top of a national list for highest rates of COVID-19 by population? It’s because, they said.