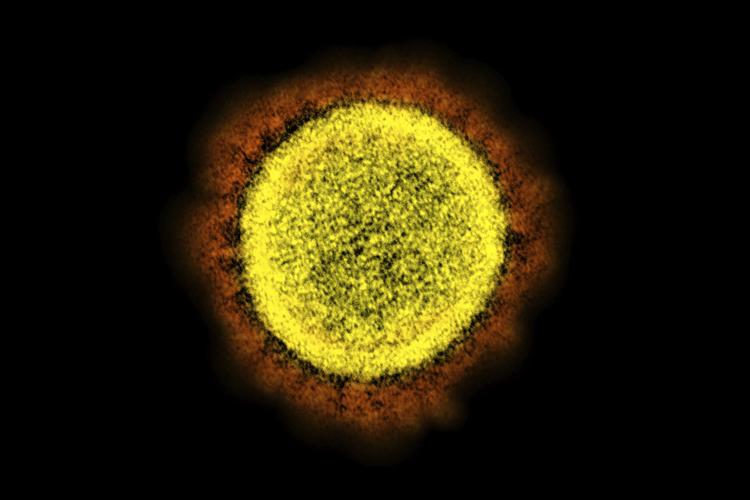 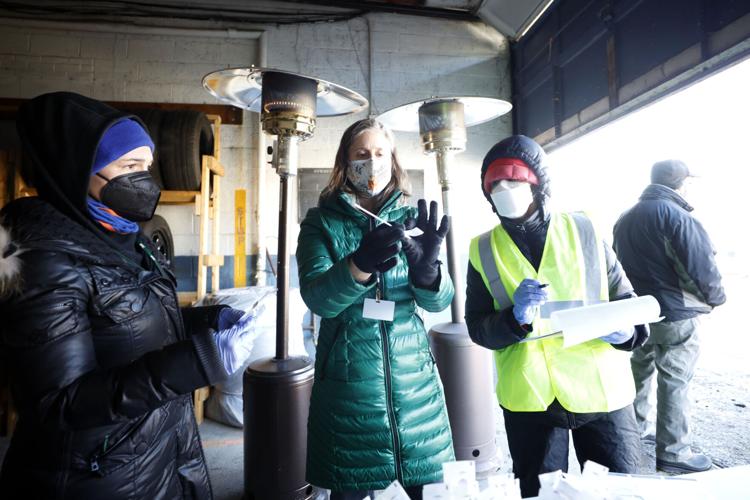 Amy Hardt, center, organizes rapid COVID-19 antigen tests as they are sent out in January to waiting cars at a drive-thru testing clinic organized by the Southern Berkshire Public Health Collaborative in Lee. 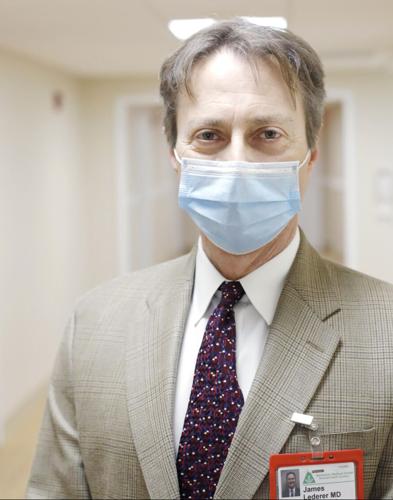 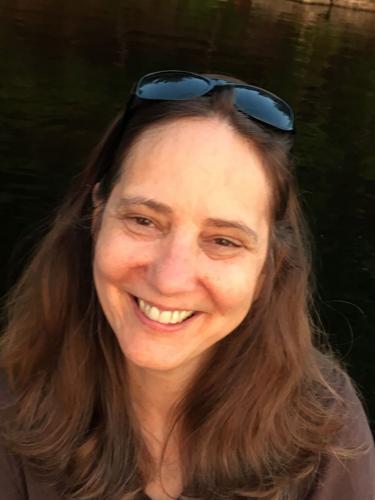 PITTSFIELD — Why, we asked three local experts, did Berkshire County find its way this week to the top of a national list for highest rates of COVID-19 by population?

Well, it’s because, they said.

– Because once it’s here, the more highly transmissible omicron variant now circulating, with the shorthand BA.2, is easy to spread.

– Because once here and spreading, the virus is staying for a while, increasing the number of those who test positive. So much so, in fact, that Berkshire County led all other Massachusetts counties for new COVID-19 cases per 100,000 population in a recent seven-day period.

“That’s the essence of the propagation of a surge,” said Dr. James Lederer, chief medical officer and chief quality officer at Berkshire Health Systems. Once a surge has established itself in a region, the higher transmissibility of the variant means one sick person is likely to expose four more people to the virus. “That’s why we see more.”

– Because the state of Massachusetts, on Feb. 15, updated its “face covering advisory” to say, a little obliquely, that people who are fully vaccinated don’t need to wear masks inside public spaces unless they have other health risk factors.

– Because people are taking fewer precautions in gatherings, including a relatively chilly Easter that may have encouraged indoor gatherings.

Laura Kittross, public health program manager with the Berkshire Regional Planning Commission, says the public health nurses she works with report many new cases within families, including children too young to be vaccinated. “It takes a while to run through a group,” she said. “I start to get worried when the hospitalizations go up.”

As of Friday, Berkshire Medical Center had 22 inpatients with COVID-19, up from 20 on Wednesday.

Amy Hardt, the lead public health nurse with the Southern Berkshire Public Health Collaborative, says the rise of the BA.2 variant, and what’s known as its “daughter sublineage,” is proving adept at getting past the protection of vaccination and even boosters, in some cases.

“It means people aren’t as well-protected as they expect to be,” she said. “We’re just kind of having a ratcheting up. It’s no longer as many older people.” Instead, many cases are affecting school-age children and young adults.

Transmission is almost a given, with the BA.2 variant and the lack of precautions, Hardt said. “They’re not masking. They’re doing their thing.”

Or as the public health people put it: Less mitigation and more exposure. Of 10 recent cases of COVID-19 reinfection in South County, all were 25 or younger and showed no symptoms or mild symptoms.

This week's appearance by Berkshire County at the top of a list isn't the first of its firsts. In early 2020, Berkshire Medical Center cared for Rick Bua of Clarksburg, the first inpatient with COVID-19 due to community spread.

And then there are the “because maybe” answers to why.

– Because maybe Berkshire County residents are using PCR tests, to some degree, more than residents of other U.S. counties, elevating it on rankings of new cases by population.

This week, Berkshire County rose to the top of a list generated by data collected by The New York Times, behind only counties in Puerto Rico and the Virgin Islands. It fell back the next day behind Middlesex County in Connecticut as having the highest number of new daily cases of the coronavirus per 100,000 population.

– Because maybe fewer people who received the initial one- or two-shot vaccine regime have gotten boosters. And use of boosters, a recent study by the Boston University School of Public Health found, is lower in Massachusetts in less affluent counties. However, boosters aren't foolproof in protecting oneself from infection, officials note.

– Because maybe the new omicron variant took hold in the Berkshires during the recent public school vacation week.

“What does the future hold? Is this a long, drawn-out plateau? Are we going to start to see some resolution?”

Lederer wasn’t alone among local experts in thinking even just a few weeks ago that the case rise Hardt described in a Facebook post as a possible “blip” would fade.

Today, Lederer admits he isn’t sure what lies ahead for case numbers. “What does the future hold? Is this a long, drawn-out plateau? Are we going to start to see some resolution?”

Hardt said that in the past week, cases are off 1 percent in the group’s 10-town service area. If the data she’s now seeing holds up, it’s possible the area may have reached a peak in new fifth-wave cases.

Tests for viral particles in Pittsfield wastewater were down about 10 percent from May 11 to May 18, a finding that points to a falling off in new cases.

From pandemic to endemic?

Lederer recalled the initial COVID-19 cases that hit the hospital in March 2020. Four people from northern Berkshire County who had attended a basketball tournament in Springfield all came down with the illness, becoming the first COVID-19 inpatients in Massachusetts — and staying for months of care in serious condition.

“This is not the same kind of disease,” Lederer said of the current cases, compared to the initial wave.

Half of the 22 now being cared for at BMC with COVID-19 are “incidental,” meaning they came into the hospital for another reason and were found, through routine testing, to be positive.

Since the pandemic began in 2020, 380 deaths in Berkshire County have been attributed at least in part to COVID-19. That's up one since Tuesday. This month, the U.S. passed one million deaths.

Lederer said that while current COVID-19 cases can be dangerous for those with other health issues, the omicron subvariant is more like the kind of coronaviruses that moved through the population before the 2020 arrival of the “novel” kind.

By that he means the virus strains present are not routinely overwhelming people’s immune responses with devastating lung and respiratory ailments.

“For the most part, it's more of a mild, ambulatory disease,” he said.

But not in all cases. While the clinical condition of those hospitalized with COVID-19 is generally better that earlier in the pandemic, with no one no in intensive care as of Friday morning, some patients are still needing supplemental oxygen.

“We’re starting to see an uptick in the number of people who have significant respiratory complaints,” Lederer said.

Kittross, the planning commission’s public health program manager, said people need to make their own judgments about masking and social distancing. It makes sense, she said, to be tested before visiting an elderly relative.

Though the state’s Stop the Spread program has ended, people can arrange PCR tests by calling 855-BMC-LINK, or 855-262-5465, daily from 8 a.m. to 4:30 p.m. Callers can ask the BMC hotline whether their insurance will cover the testing.

Public sentiment may resist a return to mask use, in Kittross' view. “I don’t think there is a ton of tolerance for that any more.”

“I would remind people that if you can, wear a mask for a week or two," she said. "And try not to be inside with a larger group. Hopefully, in a couple of weeks. we’ll start to see the cases go down.”

All children aged 5 to 11 are eligible for COVID boosters. Here's what you need to know

The U.S. Centers for Disease Control and Prevention has expanded eligibility for COVID-19 vaccine booster doses to children 5 to 11 years old — in addition to everyone above that age group. Here's what you need to know.

Out of the woods from COVID-19? Here are 10 reasons for added vigilance

A new omicron subvariant is spreading rapidly, with risks especially high for non-boosted or single-boosted people.

How do I know if I have COVID or the flu? Where can I get the bivalent vaccine in Berkshire County? We talk with Berkshire Medical Center expert Dr. James Lederer

The Berkshire Eagle sat down this week with Dr. James Lederer of Berkshire Medical Center to discuss COVID-19 trends, the start of the flu season and what people can do to protect their health.

What you should know about the latest COVID-19 strain XBB1.5, also known as 'Kraken'

One day last week, the number of people hospitalized with COVID-19 in Berkshire County hit an unusual high. That tally has eased, but questions remain: How severely will a new strain of the virus, known as XBB1.5, affect public health in the region?